I suppose I should finish up writing about Grover before it turns into June. Fortunately, I'm on our last day when all we really did was pack up and head out. The girls were rather opposed to the idea of going home and let their grumpy sides come out for pretty much the first time the entire camping trip.

When Miriam woke up in the morning and we told her we were getting ready to go home she said, "I wish we could go camping all the times!"

Alas, we have other obligations to attend to—like work and church and school—so home we went.

As Karen put it so aptly, "One of the best things about going camping is going home and not having to worry about bugs and mice and things." 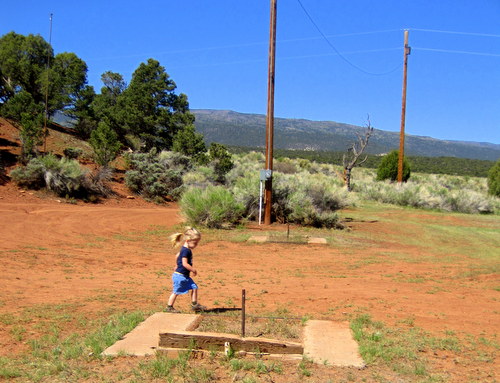 My girls don't like bugs and mice. Neither do I, for that matter, but they don't like them more than I don't. Whenever Miriam saw a bug she'd tense up with terror...or step on it (much to Rachel's horror—Rachel wanted to examine most (but not all) bugs and we had one terrific meltdown over a squashed cricket). And before we could even enter the bathroom we'd have to knock on the door and say, "Go away, mice!"

I suppose we're not entirely pest-free here at home, but things are certainly a lot better than they are at the cabin. Apparently some guy (named Earl) used to live in the cabin. I'm really not sure how. It has electricity and everything but it's really rather rustic. The only source of heat is a wood-burning stove and the door doesn't fit tightly in the frame (and is made of logs so has gaps that let the wind through). I can't imagine trying to live there through the winter.

Here are the girls "cleaning up" their sand toys. This meant, of course, that they had to stop and play for a bit. 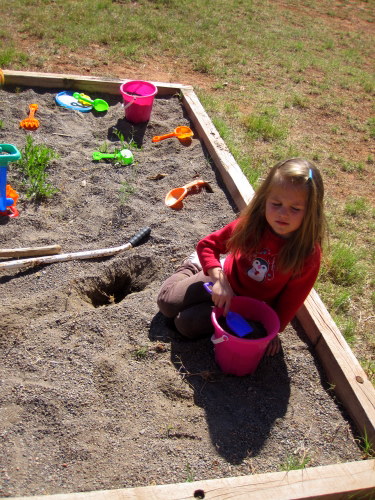 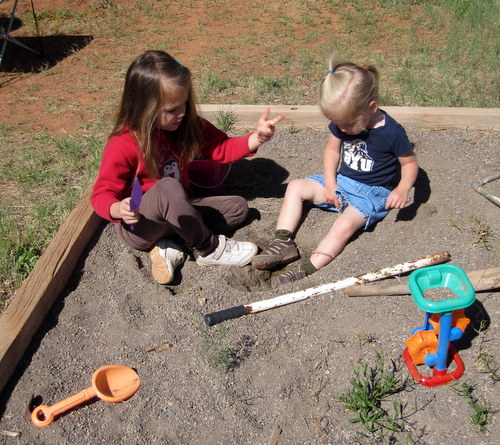 We stopped at The Flute Shop on the way out of Grover so that Grandma could find a flute for Auntie Emily—it was her birthday earlier in May. Both Rachel and Miriam also picked out little trinkets—Rachel chose a dolphin carved from stone and Miriam chose a dreamcatcher. Initially they had both chosen dreamcatchers when I told them the legend behind them. Rachel said, "I need a dreamcatcher!" so emphatically that you'd have thought she would die without one. So Miriam quickly picked one out, too. We were very fortunate to find two dreamcatchers with pink beads...

But then Rachel spotted that little stone dolphin and just about died all over again.

"Miriam and I share a room," she reasoned. "So Miriam's dreamcatcher will work for both of us."

I told her that that was fine, so long as Miriam still wanted to get a dream catcher (she did) and as long as Rachel promised that if they ever didn't share a room she would let Miriam claim full ownership of the dreamcatcher without throwing any fits (she did).

At home I noticed we have one hanging in our office—it's from Andrew's childhood, apparently—so if desperate times call for desperate measures we can let Rachel use that one (it's already helping her have better dreams, apparently).

We only had to stop twice to use the potty on the way home from Grover, so that was a little better than the drive out there. The last place we stopped was a teeny little cafe in the middle of nowhere. The washrooms would be better defined as WCs—I could hardly fit inside with Miriam, the toilet basically touched the sink and the door at the same time—and the cafe itself was so quintessentially "small town cafe," with the scruffy and somewhat bored-looking men in plaid shirts sitting at the counter and a cute, elderly woman in a crisp outfit running the joint.

Let's see...what things did I forget to write in my earlier Grover posts?

Oh! On Sunday (May 20th) we listened to hymns in the car as we drove around the beautiful canyon lands of Capitol Reef. Just as we pulled up to the cabin a song ended—it was as if we timed it. Andrew shut off the ignition and from the back of the van Rachel dramatically piped out, "Again we leave you, from within the shadows of the everlasting hills; may peace be with you, this day...and always."

That's the traditional phrase that signals the end of Music and the Spoken Word. It was funny to hear Rachel quote it word for word using her deepest voice.

Also, Rachel saw a bat on Sunday. She's been wanting to see a bat for a long time and even though we've gone for walks around the time that bats should be making an appearance we've yet to see one in the city. On Sunday when we were waiting for Venus to show up, Andrew noticed a bat flying around pointed it out to Rachel. She shrieked for joy, hugged his leg, and gushed, "Oh, thank you, Daddy!"

"You're most welcome," he told her (because he had done so much to make that happen for her).

I think those are the only things I wrote down in my notes that I forgot to blog about, so now it's time for a list of some of our favourites and some of our least favourites. I interviewed everyone in the van on the way home.

Question #1: What was your favourite part of the whole trip?

Daddy: Sunday. The whole day.
Mommy: Goblin Valley, though Sunday was just about a perfect day.
Rachel: I thought that tripping over a cactus was fun.
Miriam: When a bug chased another one around. That was funny.

Question #2: What was your favourite thing to eat?

Question #3: What was your least favourite part of the whole trip?

Daddy: Doxycycline. (He's still taking it as an anti-malarial and it causes severe...bowel issues.)
Mommy: Climbing up and down that blasted ladder with children in the middle of the night. And not sleeping in general.
Rachel: Goblin Valley, when I tripped.
Miriam: What a bug landed on me. It was a scary bug.

At the end of question three, Rachel and Miriam mutinied and refused to answer any more questions, demanding that we instead put a DVD on for them. So we did, and enjoyed the quiet it afforded us for the next hour or so until we arrived home, where we unloaded the vehicles as fast as we could.

Then Andrew did all the laundry while I rested. He's a good little husband like that!
Posted by Nancy at 1:32 AM