I can't believe it's been a week already. We're exhausted and stressed and emotional but it's all beginning to feel normal. The other night I pondered about who else takes naps at seven o'clock at night so that they can perform a bedside vigil of sorts from ten o'clock until midnight. Andrew answered, "NICU people do. We're part of the NICU culture now. It's a strange culture."

We've read a lot about the NICU culture. It seems like in recent history many of my friends have gone through (and written about) a NICU experience. I suppose it was preparing me to become, as my friend Krystal said, a member of the "premie mom club—the one club no one asks to join, but everyone here rocks!"

Everyday we get a new brightly coloured wrist band—the badge of our membership. It feels like it should be exciting, getting that wristband, like we're being admitted to a fair or something. But of course it's nothing like that. Or if it is, it's the saddest fair I've ever been to.

Being at the hospital all the time is starting to feel normal, though I still feel completely helpless about the whole situation. I don't feel like there's much I actually do for Benjamin at the hospital and I don't feel like I do very much for the girls at home and I always feel guilty for being in one place and not the other. So I always feel guilty in addition to feeling exhausted, stressed, and highly emotional. My daily regimen basically consists of eating, sleeping, pumping, crying, and traveling to and from the hospital.

Today was the most normal day we had all week. We took the girls to the hospital with us so that they could peek at baby Benjamin through the window. We had been hoping to let them meet him but someone (Miriam) had the brilliant idea to start throwing up yesterday. The kids are only allowed to visit on the weekends. And only for five minutes at a time. We missed last weekend and it looks like we'll be missing this weekend, too. Rachel was a little upset about it but I explained to her how Benjamin is already sick (spoiler alert: Streptococcus mitis) and that we can't risk giving him any other germs.

Before bed tonight—Andrew and I did the whole bedtime routine by ourselves, which helped today feel even more normal—Rachel said, "It's okay if we can't meet Benjamin tomorrow, either. I don't want him to die."

I assured her that no one wanted him to die. And he's actually doing amazingly well...you know, for a premie. It's obvious that the girls are stressed and worried, too. I think this has, hands down, been the craziest week of our lives.

Let's back up and start at the very beginning, though.


Benjamin was transported to UVRMC by ambulance (and all he got was a t-shirt...that has a life-flight helicopter on it; I think he'll be excited when we tell him he rode in an ambulance...and then sad that it wasn't a helicopter). I spent the night at American Fork Hospital. It was my second night being away from Rachel, my first night being away from Miriam, and my first night away from Benjamin, too. As you can imagine I was about ready to die. I am not used to leaving my babies!

Benjamin was put on an oscillator and given surfactant to help open up his lungs. The doctors said it's like trying to blow up a balloon without stretching it first; it's hard. Benjamin was working as hard as he could to breathe and needed a little break. He stayed on the ventilator all night.

Another thing they found during his exam was that he has simian creases which the doctor felt necessary to tell us that was one of the first things they look for as a sign of Down's Syndrome. The doctor then told us in the same breath not to worry about it because Benjamin didn't show any other signs and they were ordering a chromosomal test to be sure. As if not worrying about your baby in the NICU is even possible. Sometimes I wonder why doctors tell you things that will clearly worry you when the doctor isn't worried about it at all.

Andrew followed the ambulance to UVRMC and watched them get Benjamin all set up. They wouldn't let him hold him but he did get to do "control touch." And he took no pictures (an abomination, I tell you)! When he came back to see me at American Fork I wanted to see more pictures of my baby (because we had, like, seven from his delivery and that was it) but, alas, he had no pictures to satisfy my cravings.

I started pumping every two hours as instructed and started getting colostrum on my second time pumping. Everyone was very impressed and reacted accordingly. I was happy because it made me feel like I could actually do something for my baby but I wasn't really surprised because I am a milk factory and I know it. I leak colostrum weeks before my kids are born and leak milk months after they're weaned. My body just can't make enough milk!

I was happy to be congratulated though because after I have a baby I feel like everything is a major accomplishment worthy of glory, lauds, and honour: Standing up on my own, going to the bathroom on my own, making any amount of milk...

Somehow, late into the night, we managed to quell the adrenaline pumping through our systems, stop chatting to each other and go to sleep.


The morning report from the pediatrician is positive. Benjamin is ready to come off the oscillator and is  doing really well. Andrew went to go visit him—this time heeding my admonition to "take more pictures!"

Andrew watched them put the CPAP on but got to see Benjamin's unencumbered face before they did. 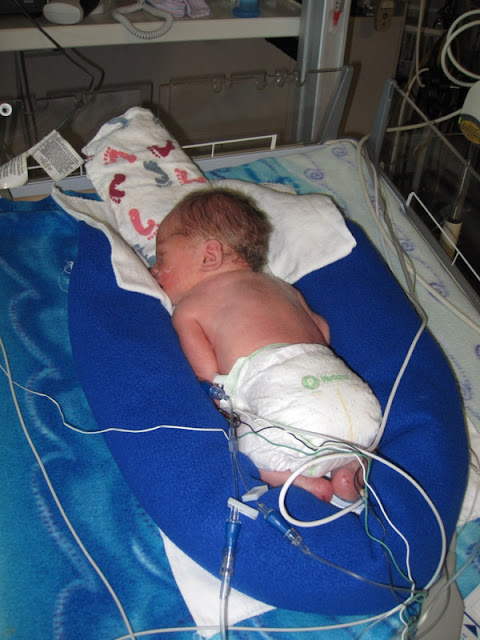 Here he is, all CPAP-ed up: It was a long day of waiting to be released from the hospital. I didn't get out until after 7:00 PM and was ready to go long before then. My mom and Josie came by to visit, as did my cousin Carlie. Andrew was there off and on throughout the day. I worked on Benjamin's baby blanket for a little while (which was probably a good thing since I haven't touched it since coming home) and I tried blogging a little but was still too emotional to get my thoughts straight.

I was so happy to be discharged! I walked out to the car and blinked in the sunshine—if I felt holed up then I didn't know what it was to be holed up...I haven't been outside in a week!—and we drove home to say hi to Rachel and Miriam before heading to the hospital to see Benjamin. Unfortunately we forgot to get my vials of colostrum from the fridge before we left the hospital so halfway to UVRMC we turned around, headed to American Fork, picked up the milk, and headed back to UVRMC. Getting there seemed to take forever!

They let me do skin-to-skin right away and began talk of starting to breastfeed (but said that wouldn't happen until he was off the CPAP). I was so happy to get to hold my baby they could have told me anything. In fact, they told me many things...and I promptly forgot it all. I hadn't seen my baby for 27 hours and I was just soaking him in. 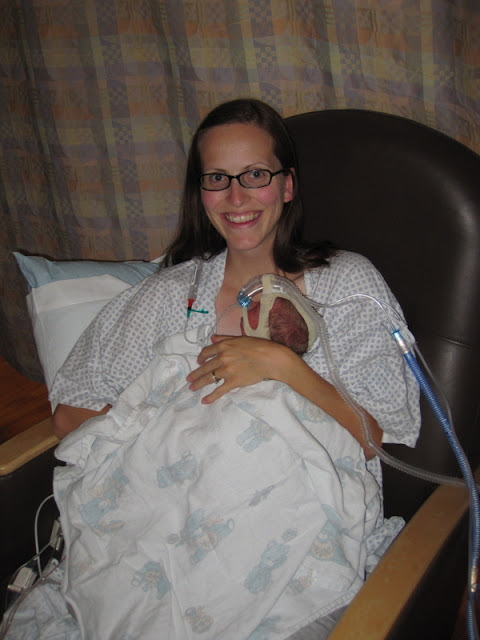 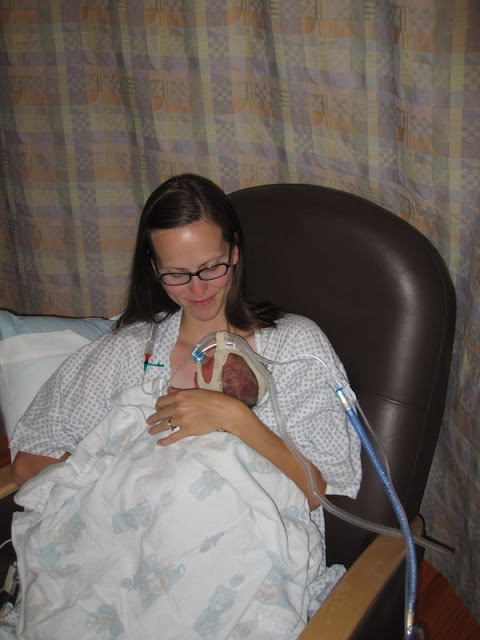 Fortunately Andrew was there and his brain was functioning on a higher level than mine was and was actually able to ask a few intelligent questions. The day before we had both been too shocked to take much in and mostly nodded at doctors with our mouths hanging open or, as in my case, with our mouths glued shut, holding our breath, while tears streamed down our faces.

They told us what feeding schedule Benjamin would be on. How we could hold him at first for only a half hour at a time, twice a day, and that we couldn't ever come in two feedings in a row. They told us about the tests they'd done and that his blood was positive for an infection (which is probably what threw me into labour) and that they were getting that cultured. They explained about all of his little tubes—for lipids and liquids and antibiotics and breast milk and oxygen and heart rates and oxygen levels and...and...and...

After I'd had my turn to hold Benjamin we somehow maneuvered him and all his many tubes over to Andrew. The nurses wouldn't let Andrew hold him until I'd held him first. He was one proud Daddy! 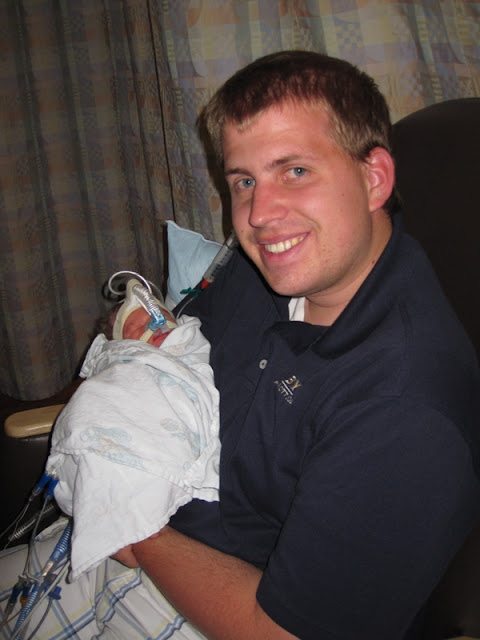 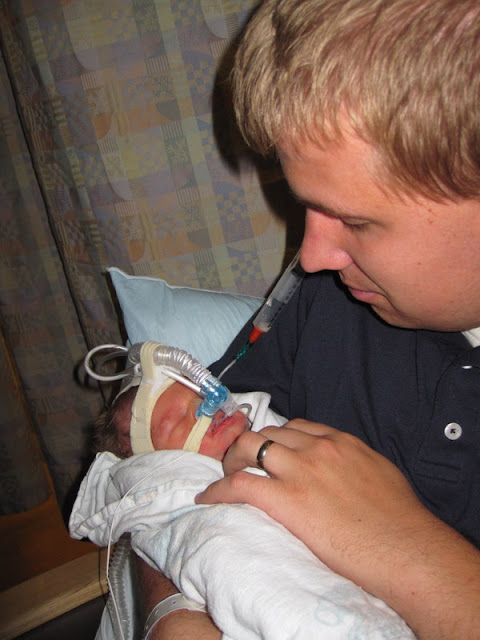 All too soon we had to say goodnight to our sweet boy. 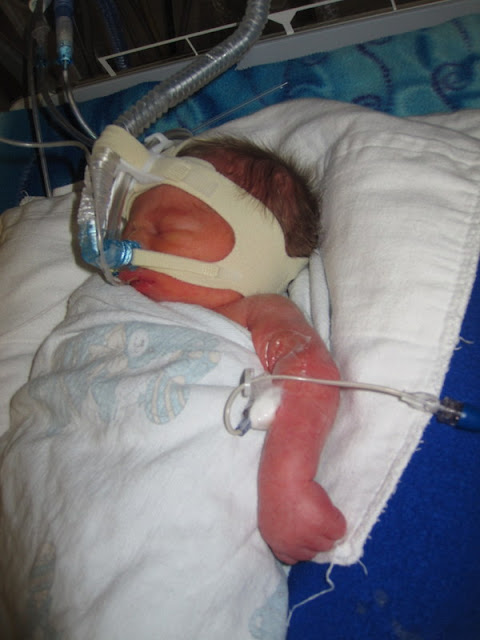 We went to Walgreens after to pick up a few supplies and fill my prescriptions. There was a bit of a line because Walgreens is, like, the only pharmacy open late at night, and a frustrated woman said waiting in a Walgreens line was like being in prison and then asked me, "What are you in for?"

"We just had our baby yesterday," I started and then gulped and choked out, "And he was born seven weeks early and I just got to see him and..."

She started crying, too, and said, "Oh, he's just little! And now look what you've gone and done—now I'll just have to cry with you! This is my daughter." She pulled a petite girl out from behind her legs. "She was life-flighted to Utah Valley from [I can't remember where she was delivered] for a heart operation and was in the NICU there. Being separated from her was the hardest thing of my life!"

See what I mean about NICU being some sort of club that no one wants to be in but everyone in it rocks? We've had people coming out of the woodwork, sharing their NICU stories with us and giving us the courage to go on even though it's really, really hard. Like we have any other choice but to go on.

So, the woman and I sat side-by-side in Walgreens and cried while Andrew talked to the pharmacist. It was a little bit pathetic (but also a little bit healing). I still cry at random times and don't expect that to stop soon. As Benjamin's occupational therapist explained to Andrew yesterday, "If you swabbed the inside of her mouth and tested it for stress hormones her cortisol levels would be through the roof!" Then she suggested he treat me the same way we're supposed to treat Benjamin, with "developmental CPR."