Benjamin's gone from zero to hero in just a couple of days! To think I spent my birthday eve bawling because he wouldn't eat a gosh darn thing and this morning he ate and ate and ate (and then he ate some more) and when we put him on the scale we found that he had eaten 51 grams worth of milk! A full feeding for him is only 48 ml, so he ate 3 ml more than he needed to and he did it all on his own!

The best part is that he kept all his stats up so we didn't hear the alarms go off once the entire feeding (or after)! It was a great visit.

The girls came to see him this morning, too. Rachel suggested that Miriam go in first since last time Rachel went in first. What a sweet, considerate girl she is! Rachel watched through the window while we took Miriam inside.

At first she was very excited to see her brother: 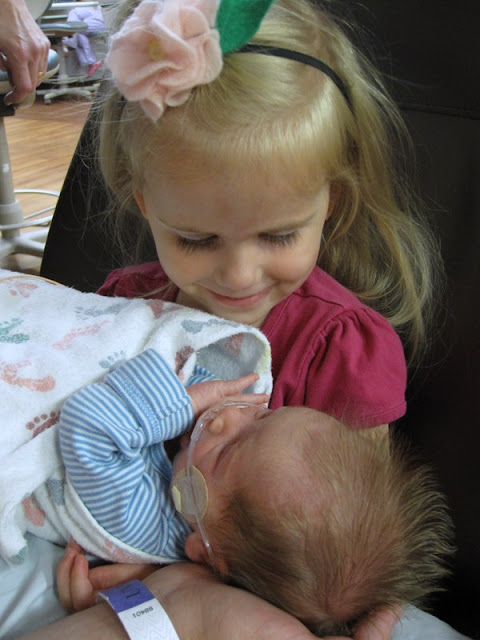 Then she looked at him like she wanted to ask "What else does he do?": 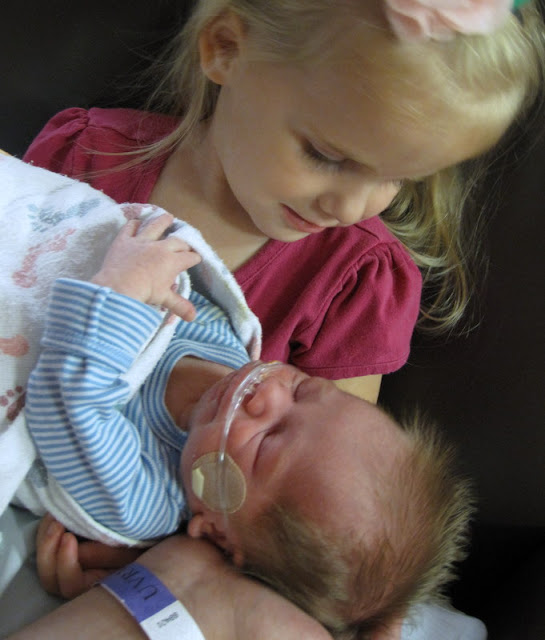 All he did was sit there, though, so she got a little bored: 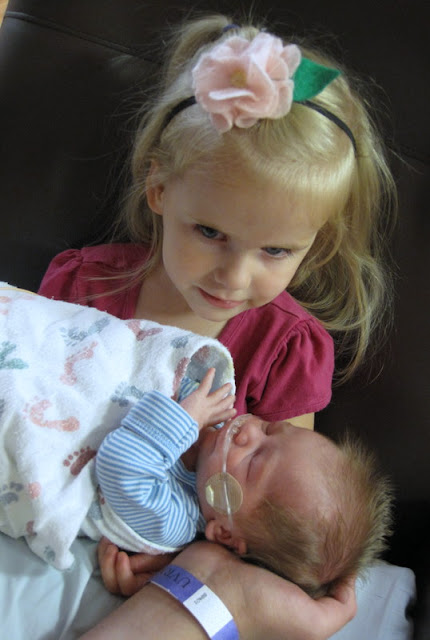 I asked her to smile and she gave me the ever-famous "is this a smile" smile: 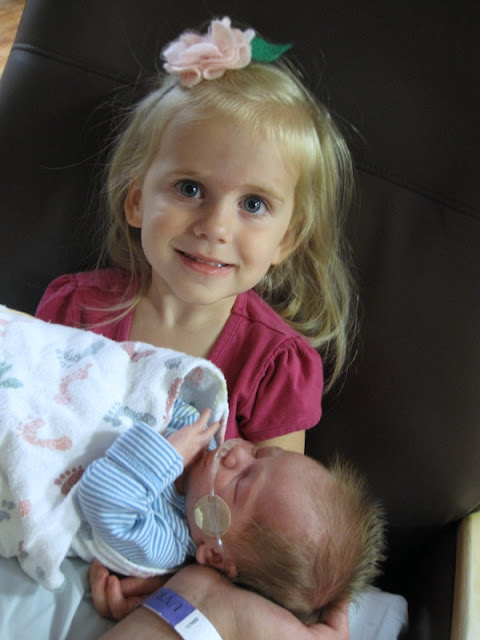 At least she didn't shove him off her lap. Of course, she didn't have time to consider that option because he pulled a Brady on her and it was kind of a long one so Andrew picked him up and rubbed his back to remind his heart that it should be beating a little faster.

Then it was Rachel's turn. Poor girl's turn got cut short a little due to Benjamin's sudden desire to eat. He was fussy, which is why Rachel looks so concerned. 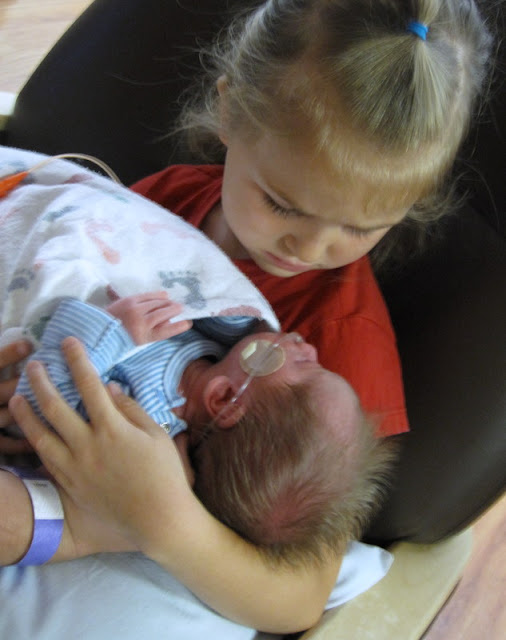 He kept rooting around her shoulder, which she found a bit awkward because he was getting rather squirmy in her arms. 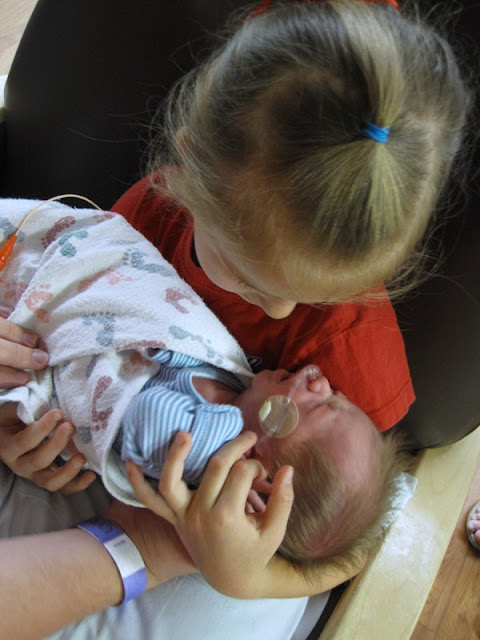 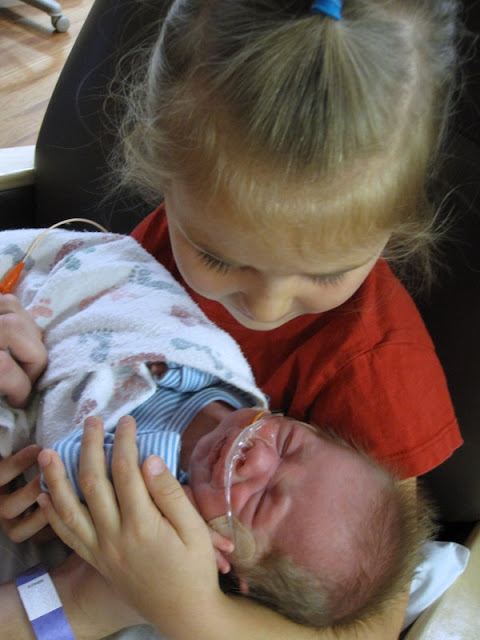 Being held by so many little hands obviously gave Benjamin a voracious appetite, since he was able to get down 51 ml! We were so proud of his hard work! And because he ate 20 ml last night and 51 ml today, they're talking about going up to three feedings again, depending on how his feeding tonight goes (so cross your fingers that he'll be a hungry boy).

Today we're feeling happy and hopeful and proud. And, you know, still stressed. But at least not miserable and mopey and despairing.

And I think I should record this simply because I keep forgetting to record other things (I'm a little obsessed with eating at the moment (because "eating is #1," as I've been told by doctors and nurses alike)): Benjamin lost his umbilical cord stump on the 20th, which has made his daddy so happy (Andrew hates the pre-bellybutton stage). He's currently 5 lbs. 1.7 oz! I don't remember when he caught up to his birth weight; it was earlier this week. He's actually starting to look a little chubby (comparatively speaking).

There's (what I am assuming is a) full-term baby next to us now. She's chubby! I don't know why she's there but we did meet a man in the elevator last night...at midnight. He looked as frazzled as could be; he got on the elevator on the mother/baby floor (which is a floor below the NICU and labour/delivery) but had a NICU bracelet on. He noticed ours and said, "You have a baby in the NICU, too, huh? How long have you guys been here?"

"Going on three weeks," we told him.

"Oh, my gosh!" he gasped, running his hands through his already wild hair. "Three weeks!? Preemie?"

"Full-term; but she's having major respiratory issues. We weren't expecting this at all so we're still reeling!"

"We weren't expecting this, either," we said, shaking our heads to show him we understood.

But we're not reeling quite so much anymore, which is nice.

We wished each other luck when we filed out of the elevator on the main floor. I think the man went off to find some food. We went home.

Life is certainly a roller coaster. Sometimes roller coasters can be predictable—you can see the track and know when to grab the handle bars before taking a huge plunge—but right now we're on a roller coaster through a dark tunnel. Every twist and turn is a surprise, giving us whiplash or sending a shockwave of terror up our spines. But sometimes we get a pleasant surprise and even though we're still riding a cart we can't control through a pitch black tunnel the ride is smooth.

Before the next big drop or sharp turn.