Having a premature baby is quite a bit different from having a full-term baby.

That's probably the understatement of the year.

Anyway, Benjamin is now two weeks old (as of yesterday) but we don't really think of him as being two weeks old because we're still counting his gestation age. Benjamin is 35 weeks and 5 days old...so just about -1 month old. It's funny that I lose track of how many days old he is because I'm always counting how long I should have been pregnant (and boy do I wish I was still pregnant).

He's still off of oxygen, IVs, and all medications. Now we're just waiting for him to learn how to eat on his own and do a little bit of growing. Eating has been our main roadblock. We started "nursing" on June 6th. At first Benjamin would just latch on a little and sit there with a puzzled expression on his face. He obviously liked being there; he just didn't know what to do. I was so nervous that I couldn't even let down for the first couple of days but once I got used to having his tiny body so close to mine I was finally able to let down and give him a little taste of milk.

Benjamin was born without a well-developed sucking reflex so even though my milk was flowing, he wasn't drinking. Babies begin swallowing amniotic fluid fairly early in utero, but in very small quantities (like 2 ml per day). Around 36 weeks they experience what our occupational therapist likes to call "the big gulp," which is when sucking becomes somewhat coordinated and babies start swallowing a ton of amniotic fluid (which expands their tummy and helps them know how to eat when they enter the world).

We've been working so hard at feedings the past couple of weeks but mostly we've been ending up one big, sticky mess. Once Benjamin figured out the art of sucking he was still unable to swallow anything and ended up spitting everything out.

Now that I'm finally not engorged (hallelujah!) Benjamin's been seeming to have an easier time latching on and finally, finally we had a positive test weight! The lactation consultants told me that one day something would click and he'd just start nursing...and I had a hard time believing them. But, Sunday morning I decided to go out on a limb and ask for a test weight (we'd stop doing them because the lactation consultant told me I'd be able to tell when he was nursing because I'd feel less full...) since we hadn't done one for a while. When we weighed him after he'd nursed his weight had increased by 9 grams! That means he drank 9 milliliters all on his own!

To say that I was excited would be (yet another) understatement. I was ecstatic!

And then I chuckled to myself about the lactation consultant telling me that I'd feel "less full" by the time Benjamin drank enough to register any number on the scale because...9 ml?! How is that going to help me feel less full when I pump off around 150 ml (per side) every feeding? It's not. But I couldn't be happier about those 9 ml!

We've had two feedings since his first positive test weight and he's done 10 ml each of those feedings. He's nothing if not consistent. I keep hoping that he'll take more because once he's getting 50% of his feedings on his own we'll be able to move up to 3 feedings a day. Right now he nurses his 10 ml and then gets 28 ml more via gavage. However, I suppose I have to recognize that nursing takes a lot of effort on his part. I have never seen a baby work so hard! He sucks for a few seconds, then swallows, and then rests for a few seconds, panting (through his nose) like he just ran a 100-meter dash, before he begins sucking again. After ten minutes or so he falls asleep, completely exhausted, so we weigh him and then burp him and then try to get him interested in nursing again. He hasn't ever found a renewed interest in nursing after falling asleep...yet. Nursing is so much work for this little guy! 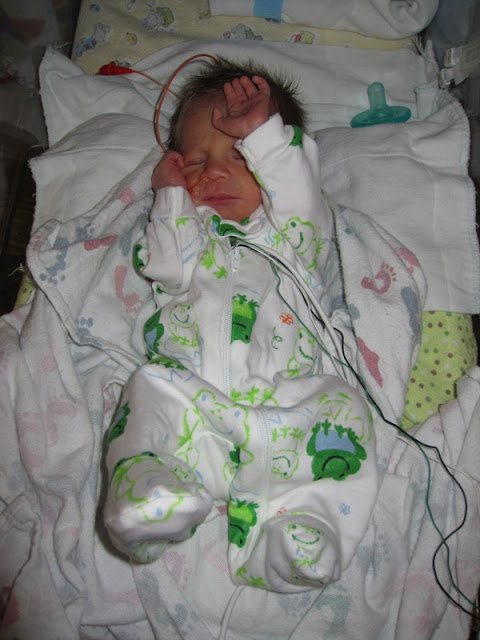 As of yesterday he was 4 lbs. 11 oz (so he's almost back up to his birth weight!) and was 44 cm long. He's wearing one of the cute outfits that Grandpa Frank and Grandma Sharon gave to him. I keep thinking all these premie clothes are going to be way too small for him but they always fit. It's like he's little or something...

I can't wait until we can take this little guy home! And I am so happy he's doing so well.

Last night while we were there, a 23-week baby was being admitted. One of the nurses said, "That is the worst baby I have ever seen!" I can only imagine how tiny it must be. Apparently it would completely desat every time they touched it so getting it fully intubated was a real challenge.

Not that I was trying to eavesdrop...but it's not like the curtains are soundproof and its all anyone was talking about on the other side of our curtain.

I said a little prayer for the poor family of that baby. And I said a little prayer for my cousin Mindy, who had her baby girl yesterday. She was whisked off to the NICU, too. Her baby was a term baby but has cystic fibrosis and obstructed bowels. She's looking at a two-month stay in the NICU. And I can't say that I envy that projection...even though we've already been in the NICU for two weeks and have no clear date in mind for when we'll be going home. I just really hope it's sooner than two months.

Being in the NICU is exhausting.
Posted by Nancy at 7:24 PM