It seems as if the world stopped turning 20 days ago. Part of me feels like an eternity has passed since Benjamin was born and part of me feels like he was born yesterday. It seems strange, and almost a little cruel, that everyone around us is carrying on like normal when, for us, life came to a screeching halt and everything is now focused on the baby.

I remember the drive to the hospital the first Saturday after Benjamin was born. We had picked the route by the mouth of the canyon since Orem's Summerfest was going on and they had a parade route blocked off on one of the main roads and construction on another. We left with plenty of time to spare but were met with a sea of break lights when we got to the canyon.

"This isn't happening!" I said to Andrew. "What's going on?"

We crawled through the traffic and finally were able to see what the hold up was—the Utah Valley Marathon.

One lane of traffic was blocked off as a running path for the marathoners. Police were stopping traffic to let the marathoners cross the street. We could see cars snaking down University Avenue. I just about started to hyperventilate.

I willed traffic to speed up. I cursed those stupid marathoners in my mind—how could they be running a stupid race when my world was crashing all around me?! Then I chastised myself for thinking that when I realized that I ran a marathon just last year and that I held up traffic and that probably one of those cars was heading somewhere of extreme importance, like to the hospital to see their baby in the NICU or to rush to the bedside of a dying parent and I hadn't given a second thought about what they might be going through...

Eventually we made it to the hospital and I don't think we were even that late. I was all on edge, though, from that stressful ride that shouldn't have been so stressful (it was certainly self-created stress).

I'm not so bitter anymore, but it does seem strange that life is carrying on without us.

For example, did you know that it is summer outside? I keep forgetting.

My girls have been having a lot of fun, though. They've tagged along to two separate barbeque parties for my parents' places of work. They went to see The Wizard of Oz at the Scera Shell with Grandma and Grandpa and other relatives (Auntie Sara and I think Auntie Katharine, Uncle Todd, and Kayl...and Shayla). Last Saturday my mom took them to Pioneer Park in Provo, where they discovered the home of one of our relatives. And today after they visited with Benjamin, Andrew's parents took them to a festival of sorts at Central Utah Gardens.

They came back with beautifully painted arms (because painting their faces was far too scary): 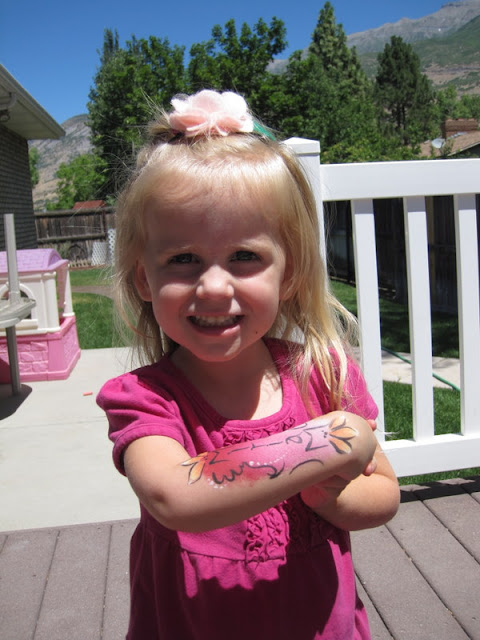 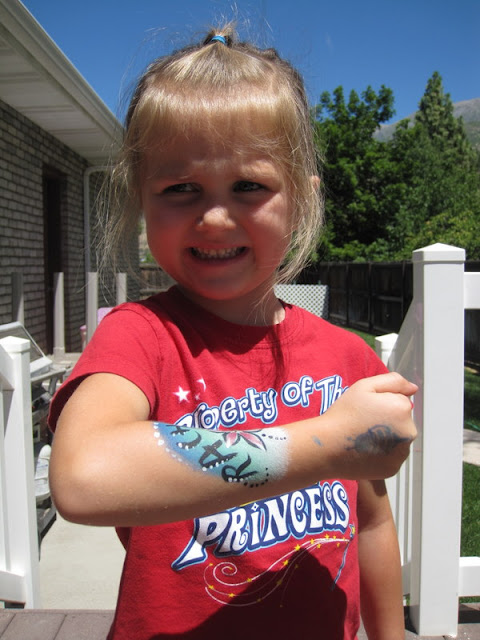 And then they changed into swimsuits so they could run through the sprinklers. They wanted another picture of their painted arms before they got wet. 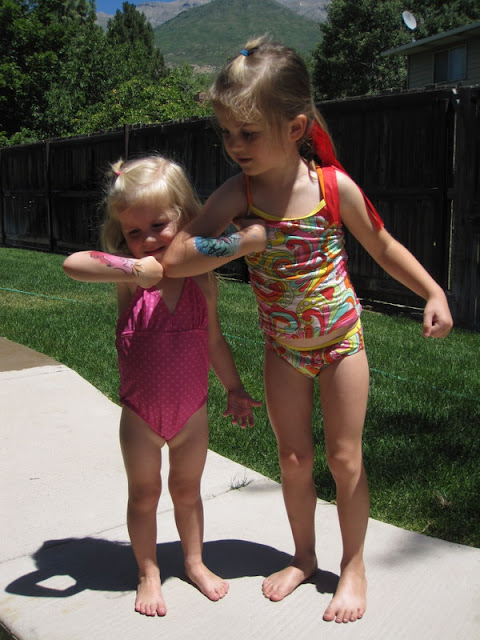 And then Miriam decided she wanted a solo picture and tried to hip-bump Rachel out of the way: 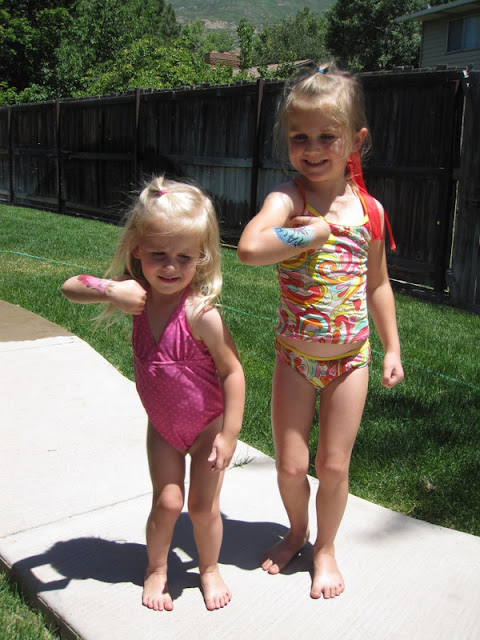 So I asked Rachel to move out of the frame so that we could get a picture of just Miriam. Instead Rachel stood in the background and pouted because Miriam always gets what she wants and it's just not fair and blah, blah, blah: 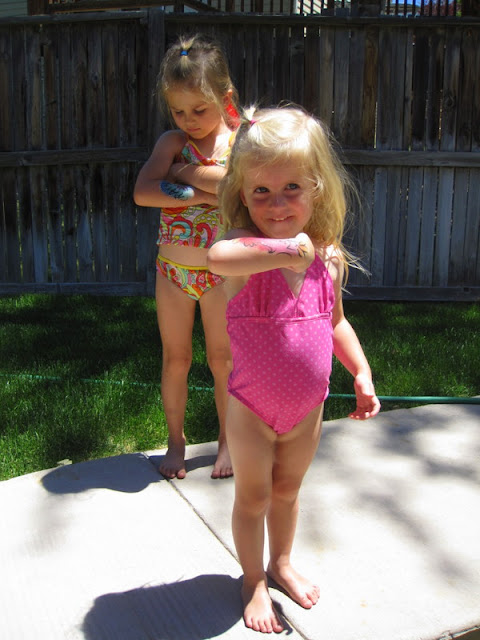 So I told her to relax because I could take a picture of just her next. No one stood in the background of her picture and pouted because they were under the impression that they had already gotten a picture of themselves in their swimsuit with their painted arm (they hadn't...but everyone was happy so it didn't matter): 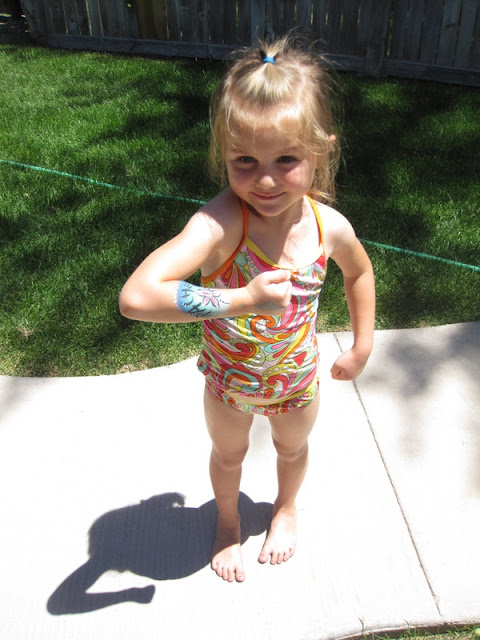 I sat in the sunshine to watch the girls play in the sprinkler. It's the first sun I've soaked up in weeks. I even ran through the sprinkler a couple of times. It's so summery outside—who even knew?! 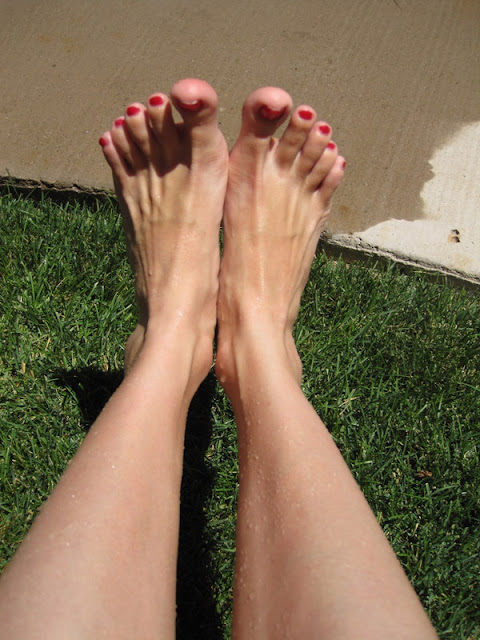 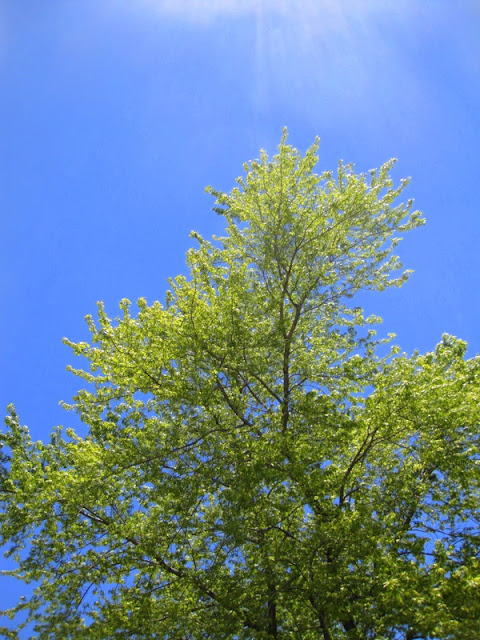 Fortunately the wind was blowing away from us. There's been a huge fire blazing near Saratoga Springs and it's been incredibly smokey lately. My cousin Carlie and Andrew's cousin Nathan and a few of our friends were evacuated from their houses. It was a crazy fire, but it seems to be under control now and the evacuation order has been lifted.

Anyway...the girls had a blast running through the sprinklers (and washing off their arm paint). 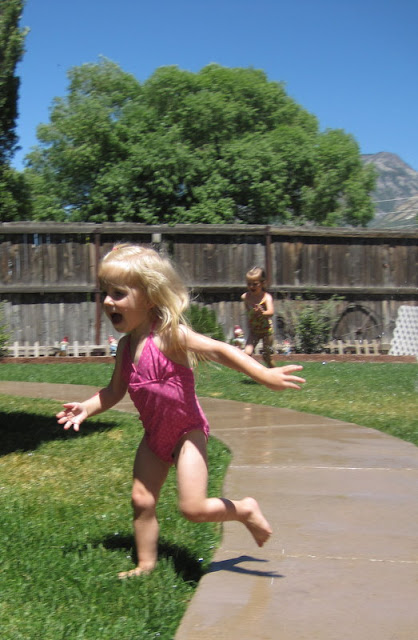 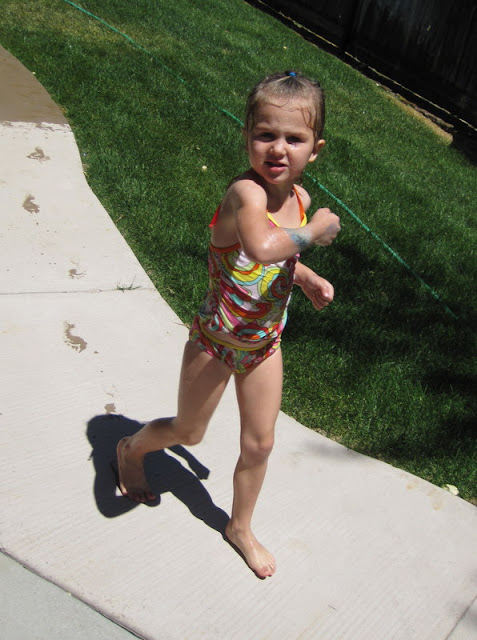 Miriam prefers to stay on the periphery while Rachel likes to get right in on the action. 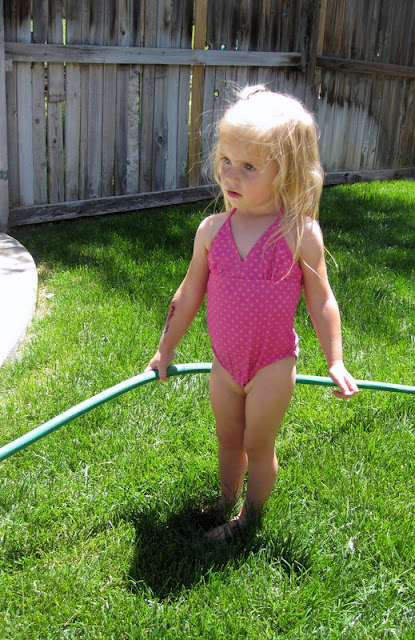 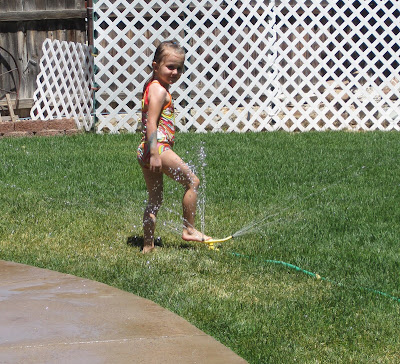 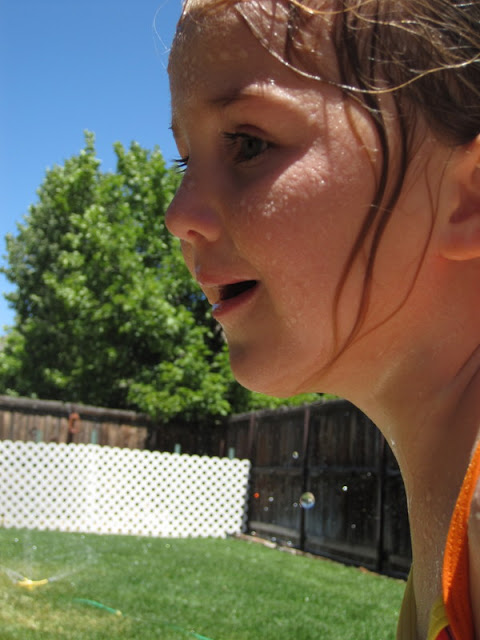 Rachel decided that Miriam needed to be a little braver and get a little wetter so she picked Miriam up and carried her into the spray. Miriam was not happy about this. 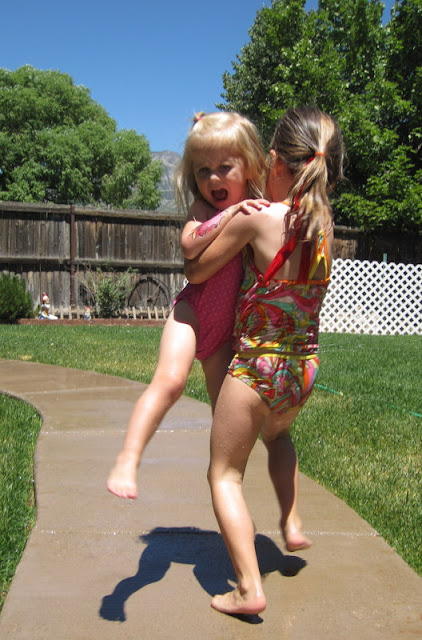 She put Miriam down right in the sprinkler and Miriam immediately ran out. Unfortunately she ran out on the wrong side of the water and was separated from her mommy and her towel so she did what any logical two-year-old would do. 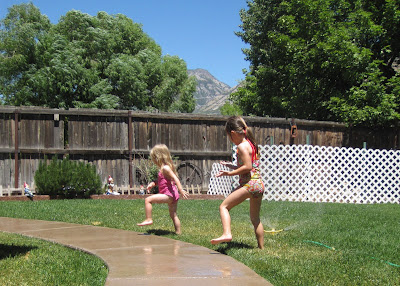 She stood on the sidewalk and screamed about her situation until I convinced Rachel to help her back to the "right" side of the sprinkler. 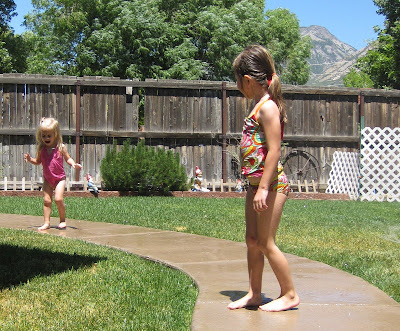 The girls enjoyed how hot their towels got in the sunshine. 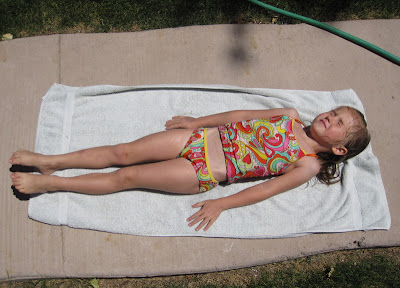 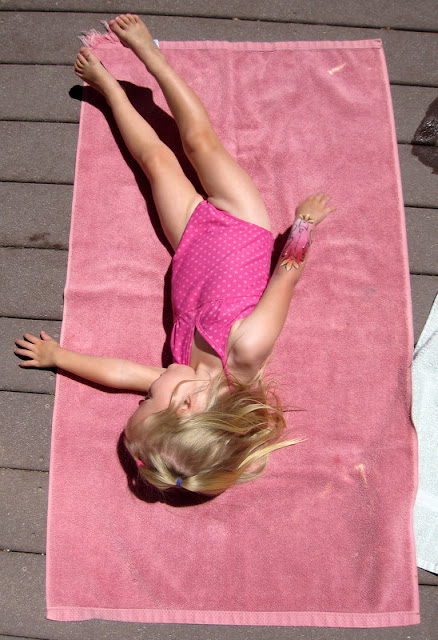 When Miriam decided that she wanted to join Rachel on the sidewalk Rachel helped her move and set up her towel. It's nice to see them work together. 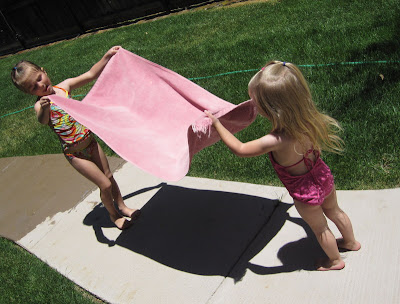 After drying off for a while the girls got back into the sprinkler for a while and continued this cycle until they wore themselves out. 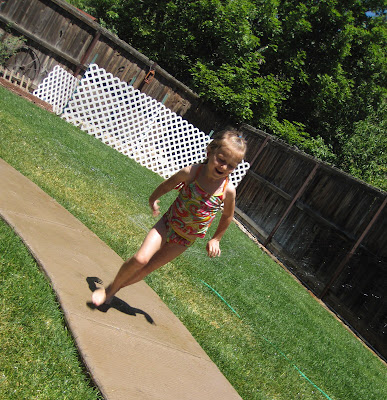 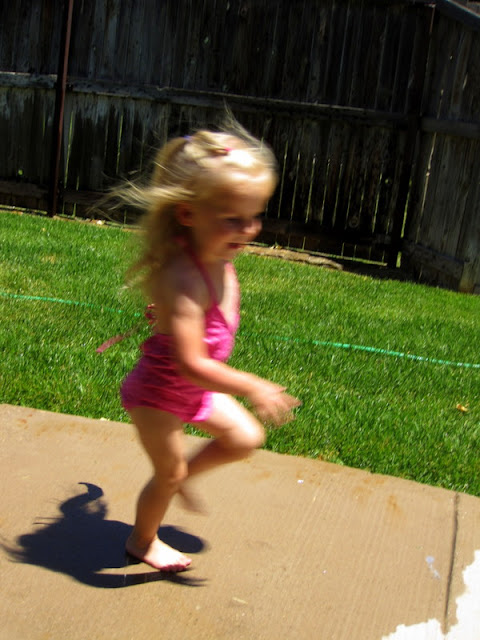 We enjoyed a quick snack before heading inside for nap time (at least for me and Miriam; Rachel watched a movie). 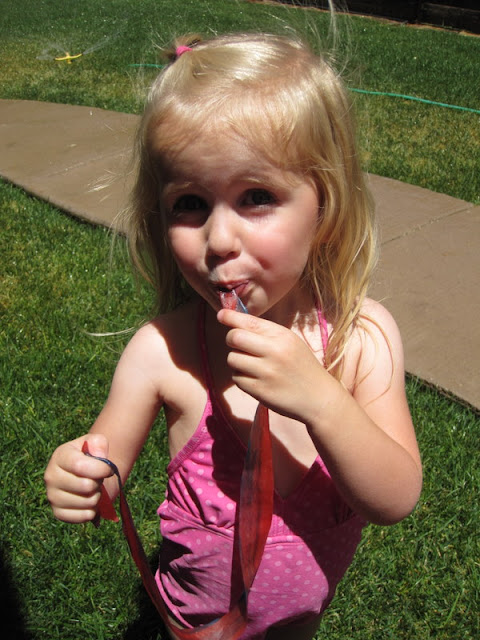 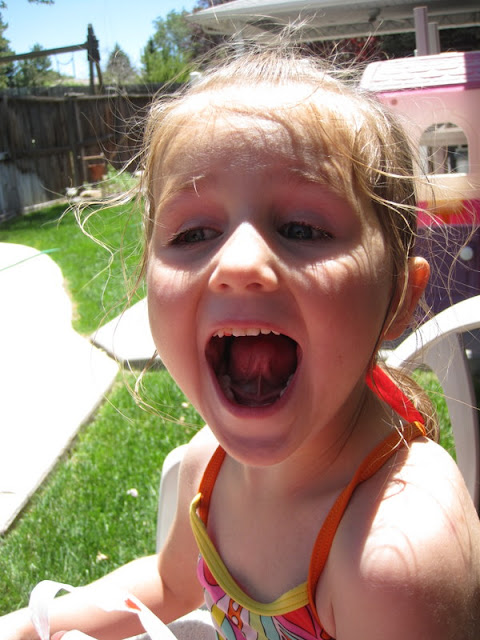 It was good to spend some time in the sunshine with my girls but it's still a little odd that I'm neither pregnant nor have a new baby with me...one day life will be normal again.
Posted by Nancy at 9:12 PM