My birthday was pretty low-key this year. Andrew and I spent a little time in the wee hours of the morning watching the mountain burn (just after returning from the hospital). Andrew got up with the girls in the not-so-wee hours of the morning and let me sleep in until it was time to get ready to go. All three of them woke me up by singing Happy Birthday.

We dropped the girls off at my friend Tracy's house and then went to the hospital and then I spent most of the rest of the day napping while Andrew took care of the girls and packed up some of the bookshelves in the office and carted a bunch more stuff from downstairs to the garage. We're trying to figure out how big of a truck we'll need to haul our things across the country.

The girls helped Daddy make dinner—they heated up canned soup and make baking powder biscuits—and then after dinner we had cupcakes. Mine was a fancy cupcake that Karen had picked up for me from a place called The Sweet Tooth Fairy; everyone else had cupcakes that Sister Christensen had brought over the day before. Or maybe the day before that. All my days are blending together.

It was just a little party—Andrew, the girls, and me—but it was practically perfect. What else could you ask for than to be surrounded by the people you love most of all? Oh, I know... 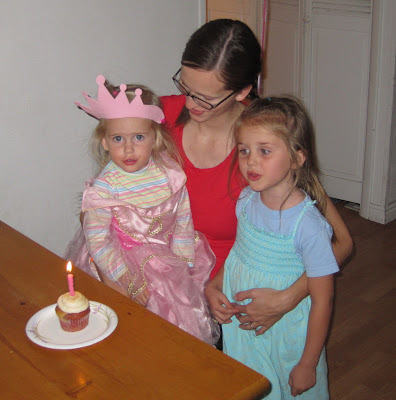 Can you guess what I wished for? 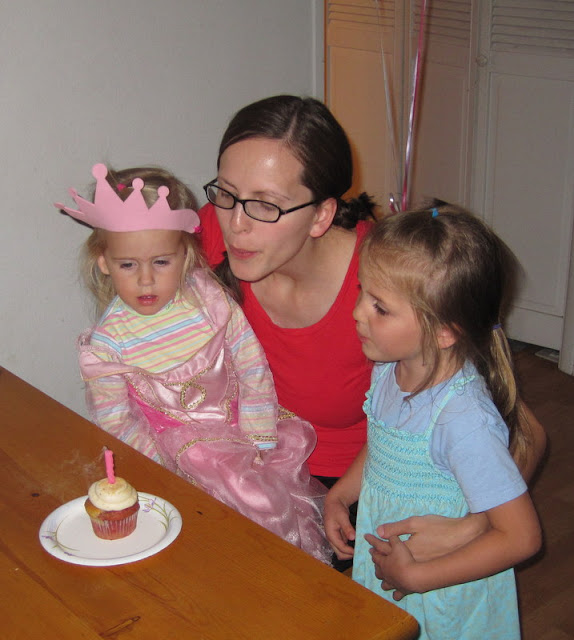 We put the girls to bed and then Reid and Karen came home and Andrew and I left for the hospital. Again.

Rachel was lamenting one day about how often I say I'm getting ready to go to the hospital.

"Do you know what would be easier?" she asked.

I could think of a million things that would be easier but I didn't offer any ideas. Instead I just said, "No. What?"

"If our house was a hospital. That would be easier."

That's very true. Having our house be the hospital our baby was in would be easier. But I can still think of a million things that would be even easier than that.
Posted by Nancy at 11:02 PM