A few days ago we were offered tickets to attend a kid-friendly concert at a local high school. Naturally, I accepted them as quickly as I could. So late this afternoon when the girls had finished their afternoon ballet session we headed over to the high school to hear the Durham Symphony Orchestra perform their program called, "Babar and Bizet."

Before (and after) the show they had an "Instrument Petting Zoo," provided by a local music shop. A bunch of instruments were on display and the kids were allowed to try them out. The girls were rather interested in this pink ukelele... 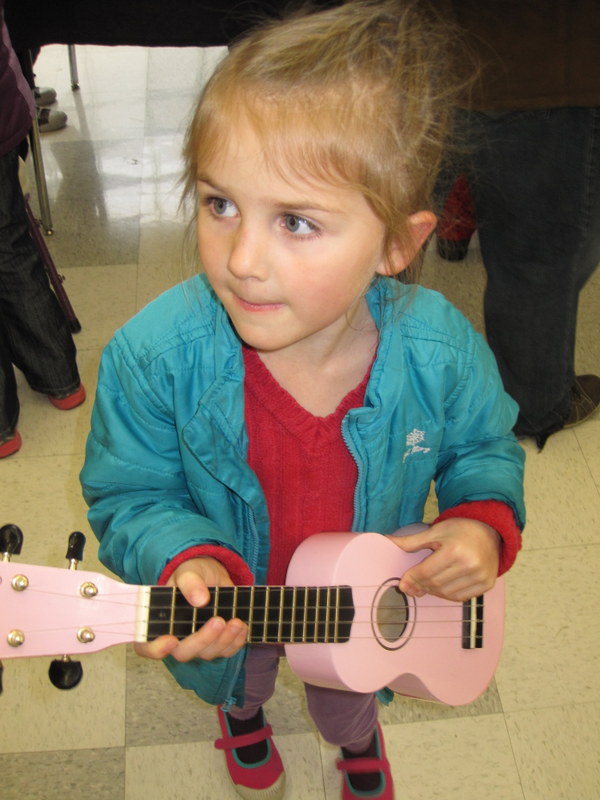 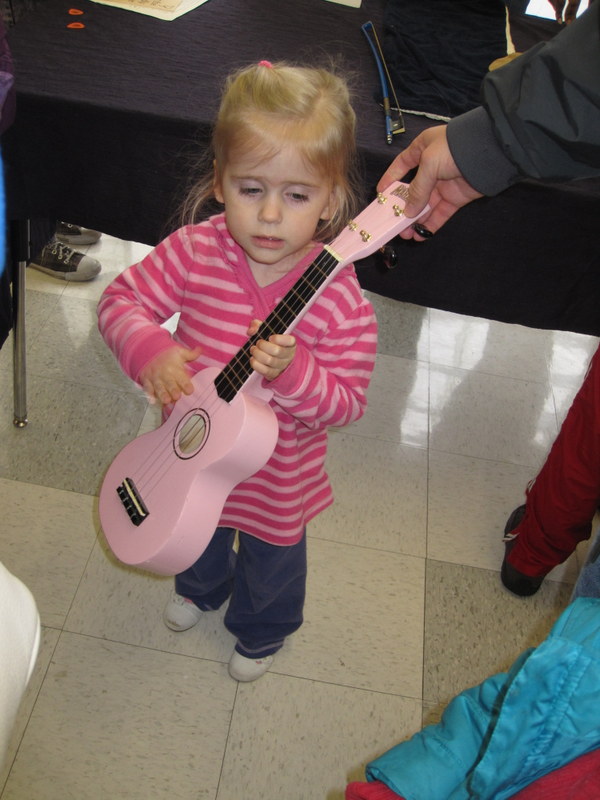 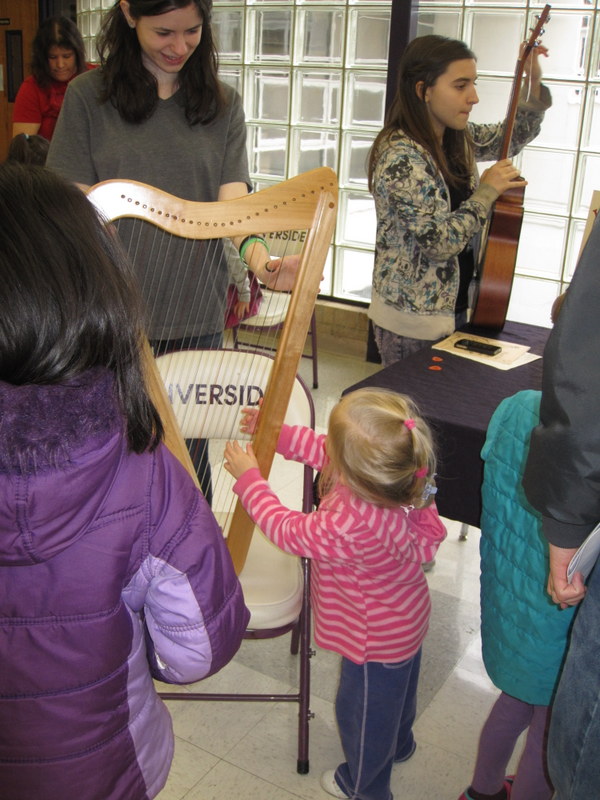 They probably would have liked to try some more instruments out but there were so many kids crowding around the instruments that our kids got a little nervous. We left the "petting zoo" and went to find our seats. 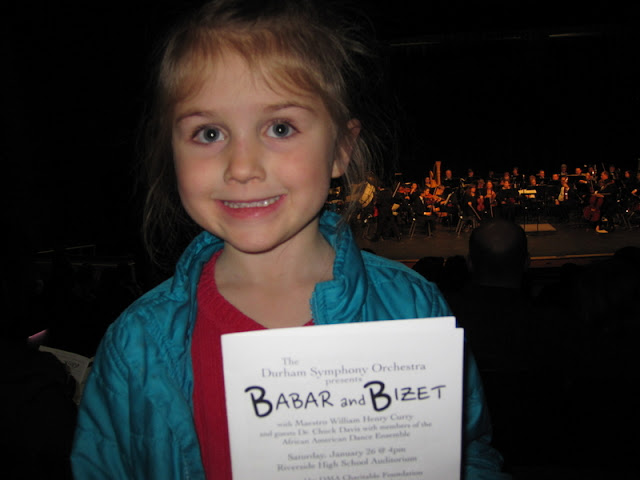 The program was made up mostly from selections from "Carmen," all of which we enjoyed. Between the pieces the director, William Curry, talked about the different sections in the orchestra and spotlighted all the instruments. The girls thought the tuba, bassoon, and double-bass were most impressive (though Rachel mentioned she would like to play the piccolo).

Rachel made some interesting observations during the music. Once piece she described as sounding "like people are stepping in puddles," but I can't remember which one because my program was unavailable. Benjamin was busily gnawing it to shreds.

The second half of the program was "The Story of Babar, the Little Elephant," by Poulenc (and Francaix and De Brunhoff and Rieu). The African-American Dance Ensemble (led by Dr. Davis) acted out the story. The girls were very impressed by the elephant costumes, which were at once simple and elaborate. I was a little disappointed in the "dancing" after their troupe was introduced as being recognized nationally, their director a "living legend."

What they did was charming and endearing but I wouldn't say it was awesome. I was kind of hoping for awesome.

I was much more impressed during the dance they did for their last number—Bizet's "Farandole."

Anyway, the program was lovely. It only lasted an hour, which was perfectly kid-friendly, and kept the girls' attention the whole time. We knew three people in the orchestra and it was fun to point them out and talk about their instruments.

The most exciting part of the afternoon, though, was when Benjamin grabbed my finger, stuck it in his mouth, and bit it—and I felt a little prick! His tooth had broken through!


It wasn't there during ballet practice—I know because he was chewing on my fingers while we were waiting for the girls. We went straight from ballet to the symphony where he gummed the program to shreds, corner by corner, until his razor-sharp tooth was ever-so-slightly poking through. 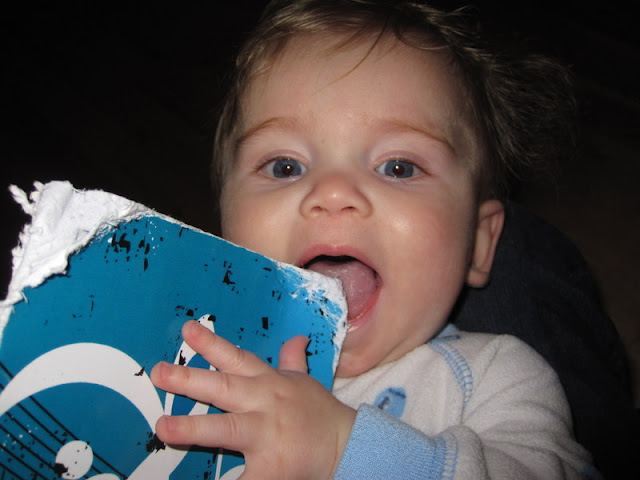 I suppose I should note that these pictures were taken after bath time this evening. We saved the program so that I could take a picture of him with his first successful teething device. We might haul three kids to the symphony/orchestra but we're not rude enough to take pictures of a teething baby during the performance! 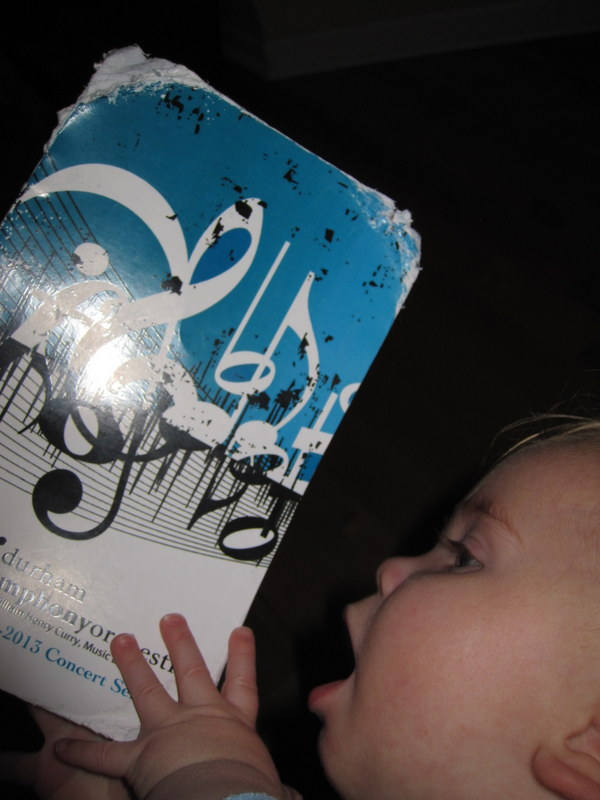 We think it would be great if he becomes a famous musician one day. Then we could say that he got his first tooth at the orchestra and nothing's stopped him from pursuing his musical career since...or something equally cheesy. Perhaps it's a little early to be planning that far into the future. For now I think we'll focus on cutting that second tooth, getting a good night's sleep, and sitting without falling flat on our face...
Posted by Nancy at 11:12 PM