She crawled into bed with me when she was finished and started begging me to allow her to stay home from school.

"Please, please, please let me stay home from school. I'm still sick. I need to rest. I won't bother you or anything. I won't fight with Miriam. I won't ask to do anything. I'll just rest all day in my bed."

Considering it wasn't even time to get ready for school yet and she was already pestering me, she was off to a bad start to keeping her end of the bargin.

"You're fine," I assured her. "You don't have a fever or runny nose or anything. You've been sick for nearly two weeks. Your cough is only bad in the mornings and as soon as it goes away you want to be up and doing things. You're going to school."

She stayed home on Wednesday and let's just say that things weren't entirely calm at home.

I heard Benjamin stirring, so I went out to get him from his bed so that he could nurse. Instead of bringing him back into my bed I sat on the couch to nurse him (since my spot on the bed was taken up by Rachel). He started greedily gulping down his milk and lazily closed his eyes to drift back to sleep when we were interrupted by Rachel.

She came and plopped down on the couch beside me.

"But you are bothering me. It's not even seven o'clock yet and here you are, pestering me and waking up your brother. If you were really sick then you would go back to bed."

"Then you're going to school."


It's not that I mind having Rachel home. I don't. It's just that when she's home and not sick we can do things—we can go to the park or play with the neighbours or any number of things—but when she's home "sick," we can't. If she's using the excuse of being sick to stay home then she needs to be acting sick, which means no going to the park or playing with the neighbours.

By this time Benjamin was quite awake (which is a real shame at 7 AM when your baby doesn't go to sleep until 11 PM or later) but I decided to nurse him until he was satisfied anyway.

That's when he was taken with a coughing fit.

Benjamin coughed a few times and then his breakfast came gushing back out like a waterfall, drenching me and the couch. Rachel jumped off the couch and ran to get a burp cloth (she's well-trained) and I sopped up what I could, stripped Benjamin's clothes off and set him on the floor (where he coughed a few times and spat up even more (which is really impressive considering how much he spat up the first time)). We were both so covered in regurgitated milk that our only option was to hop into the shower.

I picked Benjamin up and headed to the bathroom, where I noticed some rather swollen mosquito bites on his ankles. Poor baby!

And then I noticed something else—a perfectly round brown dot. Maybe a piece of dirt? I tried brushing it off. It didn't brush off. Maybe it was a scab? I looked closer. It could've been a scab...if scabs had legs!

"Andrew," I said, rushing back out of the bathroom. "Is this a tick?!"

He got a flashlight and shined it on Benjamin's ankle, taking a closer look.

"Not tweezers!" Andrew said. "That will leave the head inside and it will keep burrowing down until it gets to his bone! What did they say to do in scouts? Put nail polish on it or something; suffocate it."

Fortunately, Andrew looked up the solution—which is tweezing—and was able to pull the nasty little creature out/off of Benjamin's ankle. Then I jumped in the shower with Benjamin and scrubbed him down with soap and water from head to toe (focusing a lot of my attention on his feet while trying to avoid irritating the mosquito bites around his ankles).

I'm not even entirely sure when/where he got it. He spent a lot of time playing in the grass yesterday (and we live in an area where we're "fortunate" enough to have ticks in our grass apparently—yippee!) but I didn't notice anything when I got him into his jammies. We did, however, go for a bedtime walk, which involved walking through the grass to get to the park (one day they're going to put a sidewalk in there, it's been approved and everything) so maybe he picked it up then?

Where I grew up—no matter which location you choose—ticks aren't as widely distributed as they are out here. We were trained to check for ticks while camping or after going hiking, not after coming inside after playing in the backyard! One of our neighbours told us to just check for ticks during our children's nightly baths, which would work...except that our children have never taken daily baths. But maybe we'll start.

The good news is that I don't think it's a deer tick (though it might be a deer tick nymph). Rather I think it's a lone star tick (or nymph or larva). Lone star ticks don't carry Lyme disease, though they do still carry disease—STARI (Southern Tick Associated Rash Illness) which is much less severe than Lyme disease. Both are treatable with a course of antibiotics, though, so we'll keep watching Benjamin for fever/rashes for the next month or so, so that we can catch anything super early.

See how tiny it is? 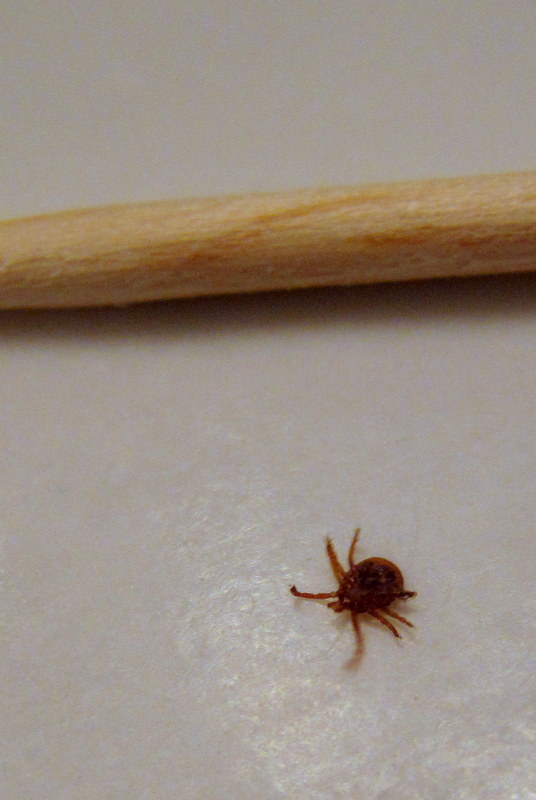 That's a toothpick it's standing by, just for some reference. It was seriously like a little dot on his ankle—obvious and not at the same time. I think adults are bigger than that, which is why I think this is a nymph (because the larvae are tiny).

Now that I now what to look for, though, I'm not as scared of ticks as I once was. I guess I thought they'd burrow completely under your skin, but they don't. They just hang on and suck your blood for 3–4 days before detaching and moving onto the next stage of life (literally—they can't move onto the next stage of life until they have a blood meal). And I read somewhere that finding a tick even within 24 hours of it first possibly attaching to you is considered a "timely" find and reduces your risk of having a tick-borne disease spread to you, so that made me feel better because I was feeling awfully guilty for not checking Benjamin for ticks...after going on a walk in our neighbourhood. Sheesh. Who knew we had to do that?!

Ticks follow deer populations, apparently, so urban areas that have managed to decrease their deer population have seen a decrease in human tick bites. There are so many deer in Durham, it's no wonder there are ticks everywhere. But how do you convince the deer to live elsewhere?

Andrew said that we should've taken a picture of the tick on Benjamin's ankle so that we could show Rachel what to look for so that we can teach her to check herself for ticks when we come inside but I was too focused on getting the tick off my baby that we didn't have time to take a picture.

We'll definitely be instituting a nightly shower ritual. Or at least a nightly "let's all check for ticks before we go to bed" ritual (since I believe in conserving water).
Posted by Nancy at 3:41 PM