Benjamin'd been playing on the playground while I was working the water table and the girls were running, as I mentioned. There were other children playing there, siblings of other children running, and since the fun run lasted a full hour (times two, but some children were only there for one hour or another (though some; like us, were there for the full hour plus time before, between, and after each round of the fun run)) he felt like he got to know these new little friends quite well.

I was cleaning up at the end of the run—picking up discarded cups, taking pictures of classes for teachers, things like that—and he was still playing at the playground with another family that was still sticking around.

When that family started getting packed up to go, the mom was sitting down to put shoes back on her own little boy and Benjamin came up, put his head in her lap, and said, "My mom left. Can I come home with you?"

She pointed to me and told him, "Your mom's right there!"

I didn't see this exchange go down; the mom told me about it before she left. I thought it was hilarious because that's so Benjamin! He probably would have been perfectly happy to go home without me (for a while) but he was also perfectly happy to go home with me, though on the way to our car he fussed about not being allowed to play on the kindergarten playground. I was like, "You just played at the playground for three hours."

"But not that playground," he said.

I rolled my eyes, hefted him into his carseat, and drove home.

We had leftover waffles for lunch and I made the mistake of leaving him at the table with his food while I went to the bathroom. He helped himself to the syrup. All of it. 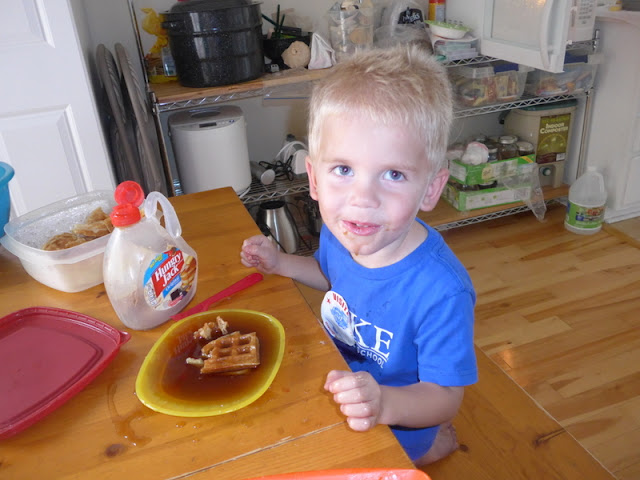 At least he didn't make too much of a mess.
Posted by Nancy at 6:18 AM