The girls had their school fun(draiser) run today. I volunteered to work the water table since I knew the girls wanted me to be there to watch them run, anyway. Benjamin had a blast playing on the playground with the other little siblings for three glorious (and mostly unsupervised) hours. Zoë was more than happy to snuggle in the front carrier. And I literally poured water for three hours.

The atmosphere was electric with energy. Elementary schools typically are. But then, oh, but then there were the hyperactive hosts calling cheers into their microphones and music blasting over speakers and parents cheering and so forth.

Zoë typically gets sleepy when she's in the front carrier but this morning she was ridiculously sleepy. People kept commenting on what a good sleeper she is and I was thinking, "Dudes—she's totally stress sleeping." She was trying to tune the whole world out; poor dear was completely overstimulated, as was I. We all went home for an afternoon nap when we were finished—including Benjamin.


The girls collected quite a bit of pledge money and got some sweet prizes, which they were excited about. The company that runs the fundraiser also does two weeks of "character training" or something. Run with endurance. Verb with curiosity. Verb with noun. And so forth. The level of excitement they'd built up about running around a track 35 times was quite impressive (this coming from a one-time distance runner, I know). They were so excited that when we came home from ukulele Miriam stumbled through the door and said, "Dad! You haven't asked me how the fun run was yet!" at 6:00 PM. 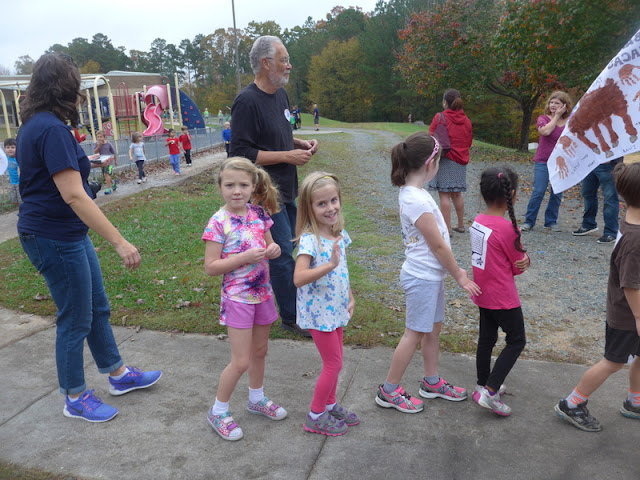 She did her run at 9:30 that morning. How dare her dad not ask her about it yet! Who cares that he hadn't even seen her the whole day? That's irrelevant! He didn't even ask her how the fun run was! 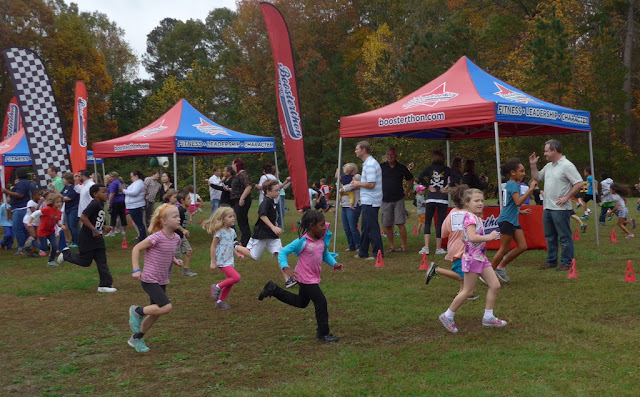 There she is—in the pink leggings—running by. She made great headway on her laps, only stopping to walk with a shy little girl in her class who'd been crying on the sidelines.

Sometimes this little girl makes my heart melt into a puddle of happiness: 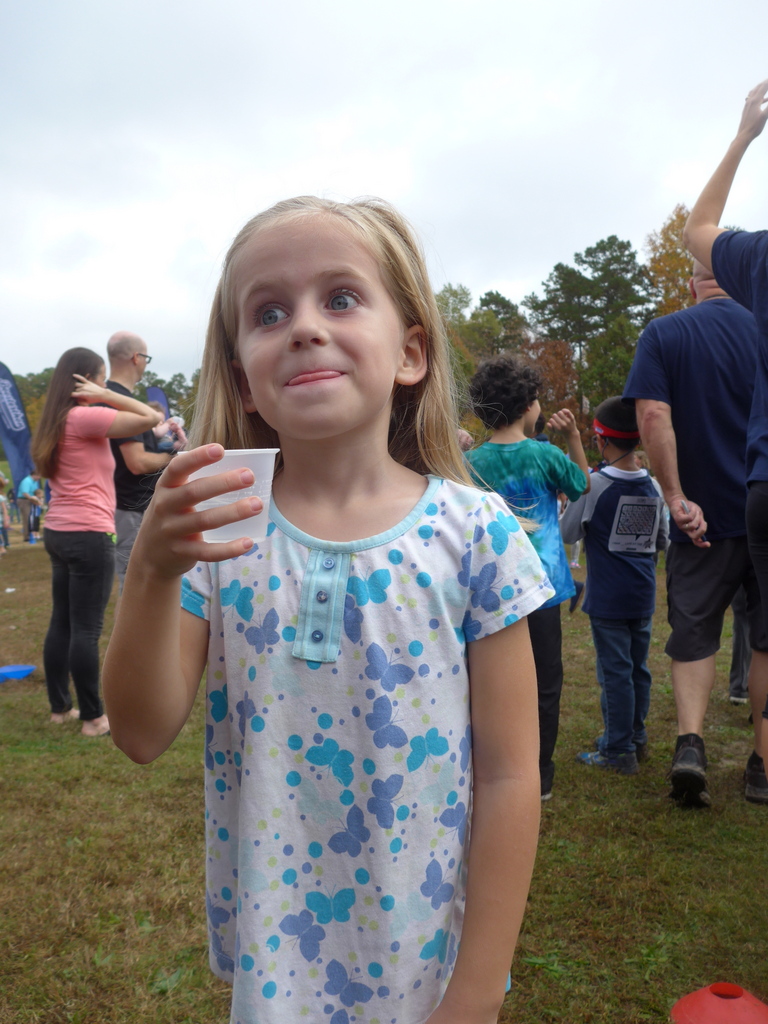 The little girl she helped is an ESL student from China. Her English isn't great and she hardly speaks to anyone, but Miriam managed to become friends with her right off the bat, so when Miriam saw Aileen crying instead of walking she marched right up, grabbed her by the hand, and walked around the track with her a few times.

She abandoned her later to finish her laps before she ran out of time, but when she was finished (because only 35 laps accrue donations) she continued to walk around the track with Aileen until the time was over.

Then the younger grades were all ushered back to their classrooms and we prepared for the older grades to come out. Here they are listening to the instructions: 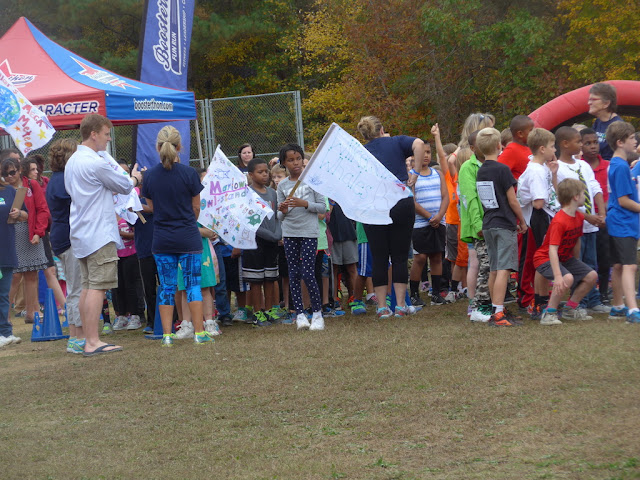 And they're off! Rachel's wearing purple on the far right. 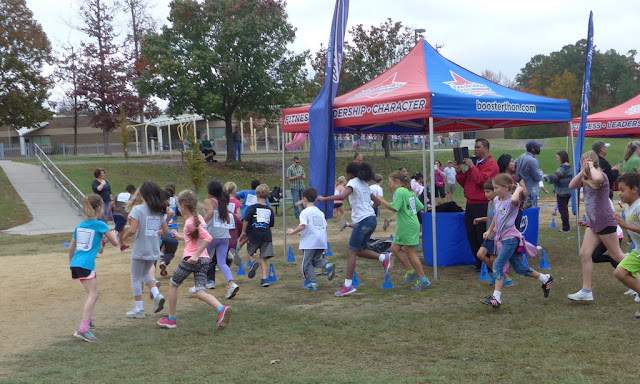 I don't know what happened with Rachel. She started out strong but then started walking and walked so long that she ended up doing about ten laps in the last five minutes of the run. I'd been looking for her, between filling and filling and filling water cups, but hadn't seen her (although I'd seen her friends come by several times) and finally I found her and grabbed her. I spun her around and looked at her card.

"Rachel! You still have ten laps left! Get moving!" I said.

"They said we could walk," she said.

"Yeah, but now you need to run or you're not going to finish!"

So she ran. She ran hard. She finished her very last lap during the ten second countdown. Silly girl.

Here's her class picture (she's in the back, second child to the right of the teacher): 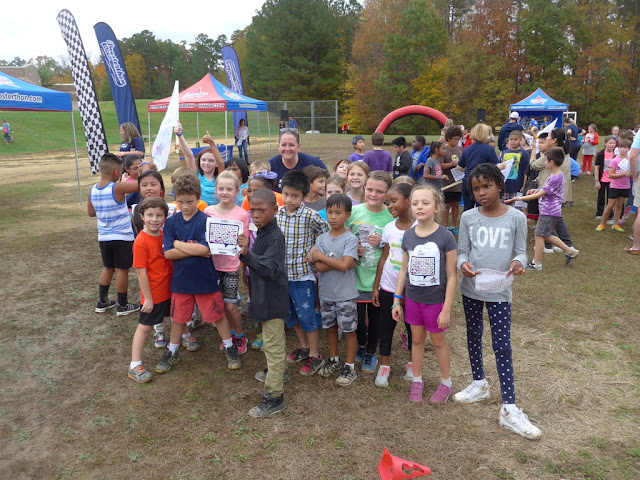 They got a special reward for earning so many pledges ($88 per lap (as a class), so $3080 if everyone in the class ran their 35 laps)! It means I get to throw them a pizza party next week; they're super excited.

The good news is that the school met—and exceeded—their goal.

The kind of lame news is that we give just under half of all the money we collected to the fun run coordinators. It's this big business thing...kind of eye-roll inducing, if you ask me.

Part of me says that we could pull something like this off without using a company to "pump us up." But part of me is just happy they did away with the silent auction. Ugh.

Finding donations for the auction. And then finding a babysitter so you can attend the auction. And then feeling pressured to buy stuff you don't want. No fun. Not that I'd ever been to the auction; even though I helped coordinated it last year I skipped out on it. It was a lot of work and no one enjoyed it and—even with giving away half the funds we earned—the auction brought in about a third of what we earned at the fun run.

Now imagine if we weren't just giving half that money away.

Andrew agrees with me. We could pull off a fun run on our own (it would, admittedly, be more work for the PTA). He said, "I mean, the school has their own cones."

And Miriam said, "They probably have ice cream, too!"

(And that's why I call cones pylons; I don't want to get anyone's hopes up about ice cream).

Anyway, to sum up: fun run was fun, much more preferable than silent auction.
Posted by Nancy at 12:28 AM