I'm still so far behind. Thanksgiving is over. November is almost over, too.

My entire family has moved onto Christmas.

Miriam made a Christmas tree out of LEGO yesterday and asked that I take her picture and "put it up on the blog with the title Merry Christmas," so here I go: 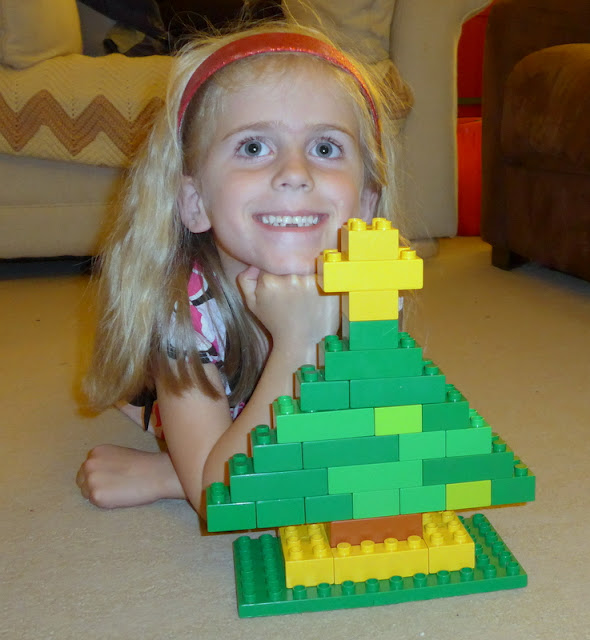 We hosted Thanksgiving dinner this year, getting all fancy and pulling out our tablecloth and everything. The meal was set to go off without a hitch. Our friends were providing turkey and potatoes (because we weren't about to attempt a turkey) and we were doing the rest. I made pie filling a few weeks ago and stuck it in the freezer, the kids and I made pie crust and baked the pies on Wednesday. When Andrew got home from work we spent the evening prepping the rest of the meal.

The only mishap was that Andrew nicked a couple of his fingers while he was cutting sweet potatoes.

Thursday morning went a smoothly as could be. The sweet potato hash turned into sweet potato...mash...but other than that everything was right on schedule.

I left to pick up the sister missionaries and returned to a house of chaos.

Our friends had arrived. Andrew had let them into the house but he was no where to be found. I eventually found him in the bathroom, standing with his hands under running water.

The poor boy had taken a pan out of the oven and set it down. About a minute later he decided he needed the space he'd set the pan down on so he picked it up with both hands, no hot pads. He'd completely forgotten that he'd just taken it out of the oven.

So here's a picture of us getting ready for dessert (Andrew's hands are still in a bowl of cold water): 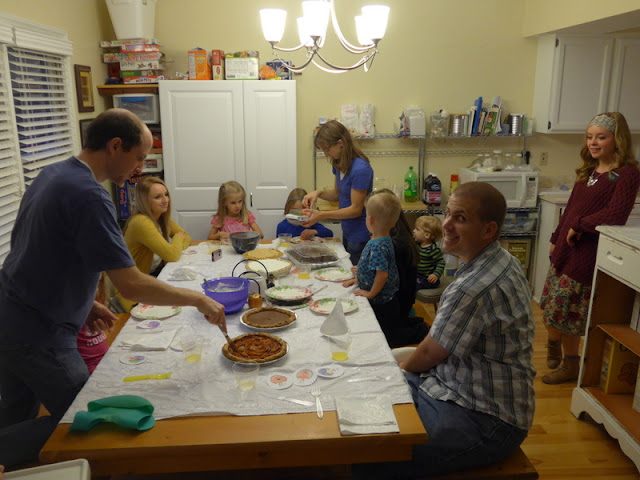 He didn't have the happiest day, but he knows now how grateful he is to have fully functioning hands most of the time.

Here's Zoë making her little scrunchy face (I love it). She and the other baby Z traded off in the high chair this meal. Neither one of them wanted to sit in it the whole time we were eating and eating and eating so it worked out well. 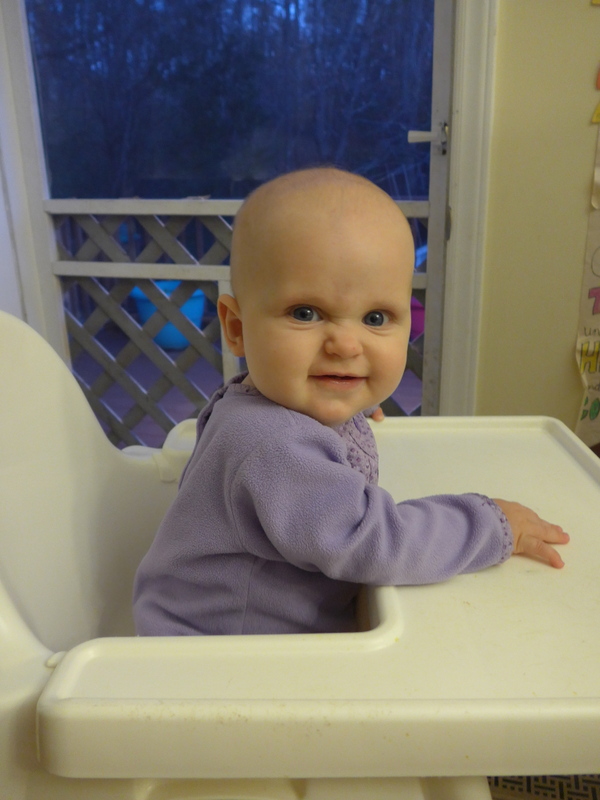 And here's our whole crazy crew (minus all the parents): 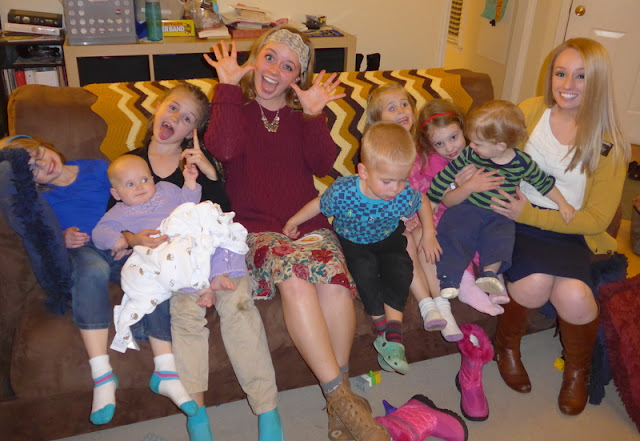 On Friday I spent a good chunk of the day organizing the attic. We've been bringing things down the past few months but haven't been great about putting them back up. Our room was full of boxes and our plan was to spend Thanksgiving evening bringing down Christmas stuff and putting up everything else, but with Andrew's hands out of commission that didn't happen. On Friday, though, he decided he could manage to help me if we wrapped his hands well enough.

His left hand only suffered first degree burns, because he let himself drop the pan with that hand. His right hand, however, suffered second degree burns. He has a big ol' blister right in the middle of his palm...and a few smaller blisters elsewhere. We put a big gauze pad on his palm, taped it on, put a latex glove on over that and a knit glove on over that. He rocked it. 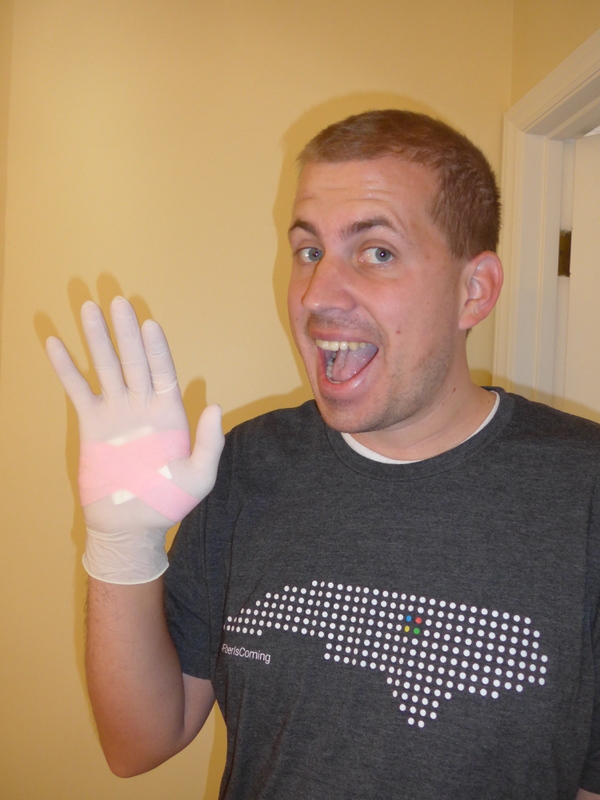 We got all the Christmas stuff down and I successfully reorganized the rest of the boxes. Kind of. I don't think I'll ever be satisfied with how the attic is organized (and that's okay). The kids had fun going through the box of Christmas books (they made short work of it). 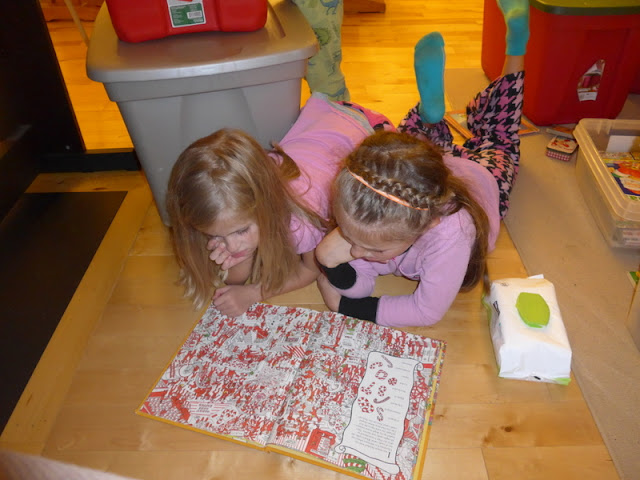 Andrew wasn't about to throw his hands into a fray with a pine tree (faux or real) so I wrestled the tree up by myself last night while he kept me company. This morning the kids were super excited to decorate it. I love going through ornaments and remembering about them and it seems my kids do as well (we won't speak of the time my mom threw away all of her Christmas ornaments a couple of years ago).

Benjamin found one of Andrew's childhood ornaments and said, "Hey! I found one with my picture on it!" He didn't believe me when I told him it was actually a picture of Daddy. 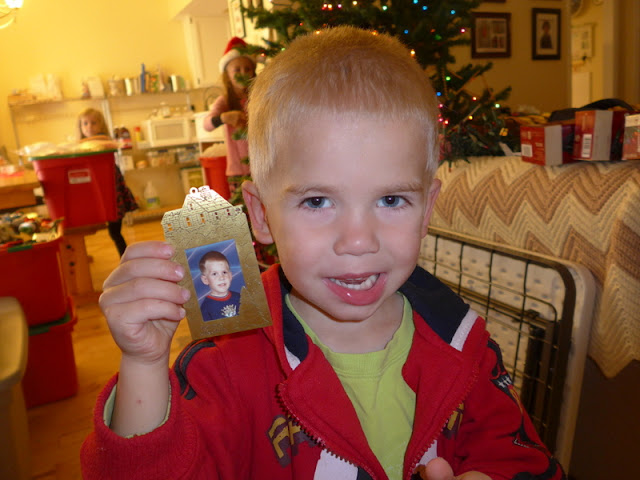 My mom will think that's funny because we were just talking about how my grandma had a picture of my cousin Jenna petting a goat in her guest bedroom and I swore for years that it was me. I remember thinking it was me; it looked just like me! How could it not be me?!

Here are a few pictures of the kids working together to decorate the tree. It's kind of a ruse because we actually had a hard time getting all three of them to stay inside at the same time. They kept wandering in and out of the house—hanging a few ornaments on the tree and then heading outside to play and then wandering back and rifling through boxes again. It took a long time to get that tree decorated! 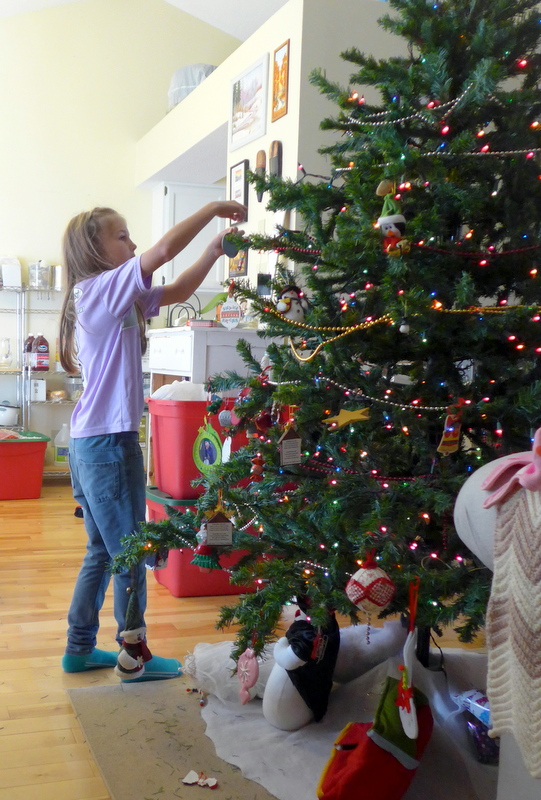 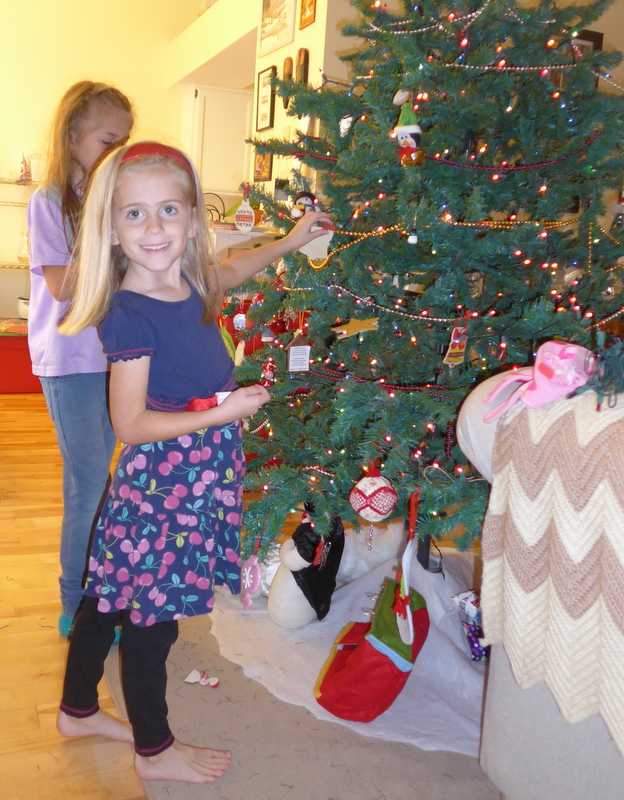 Our tree is a little bit of a hot mess, kind of like everything else in my life. But that's okay. 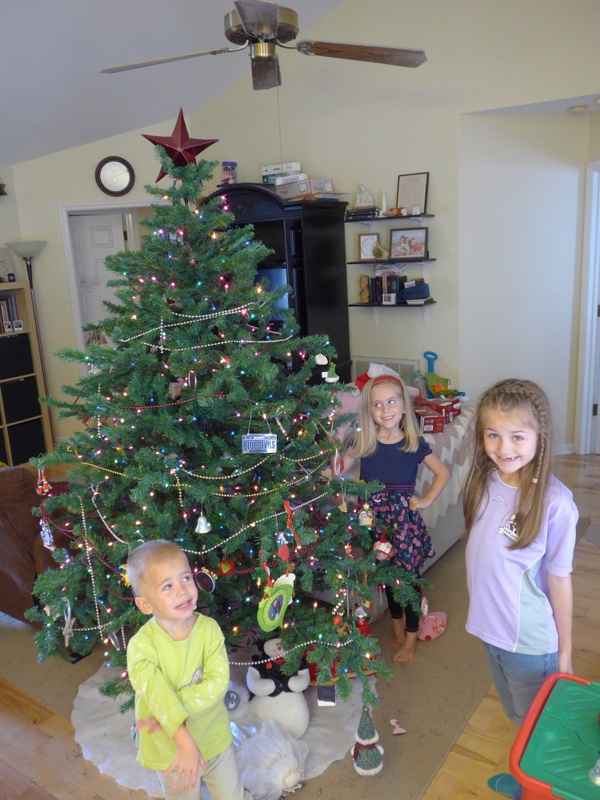 Zoë didn't participate in the tree decorating much but I stuck a Santa hat on her head, plopped her in front of the Christmas tree, and snapped a few pictures, which was a very wise decision because this baby is beautiful. 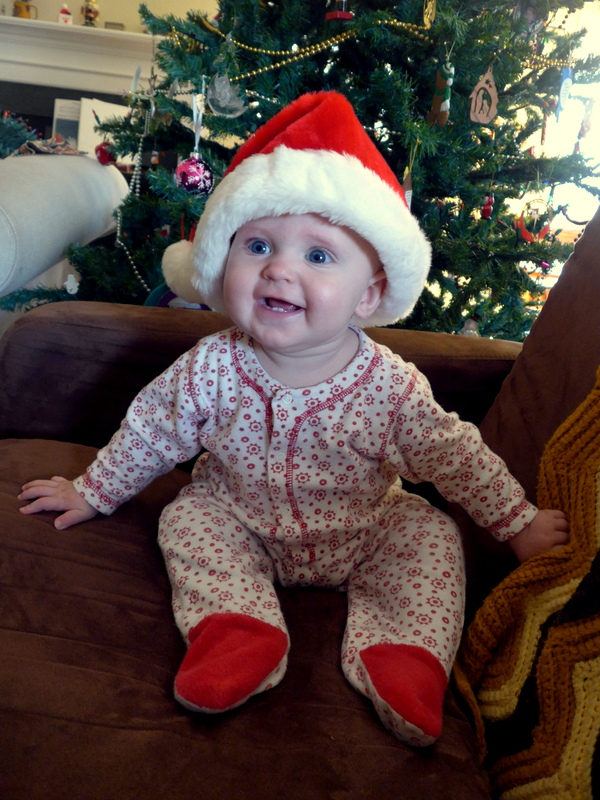 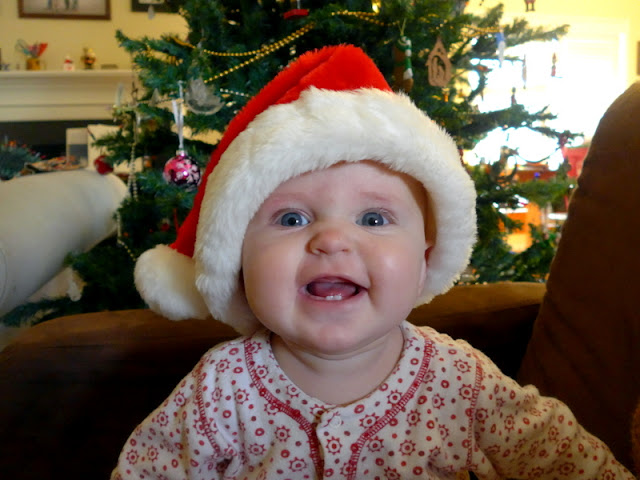 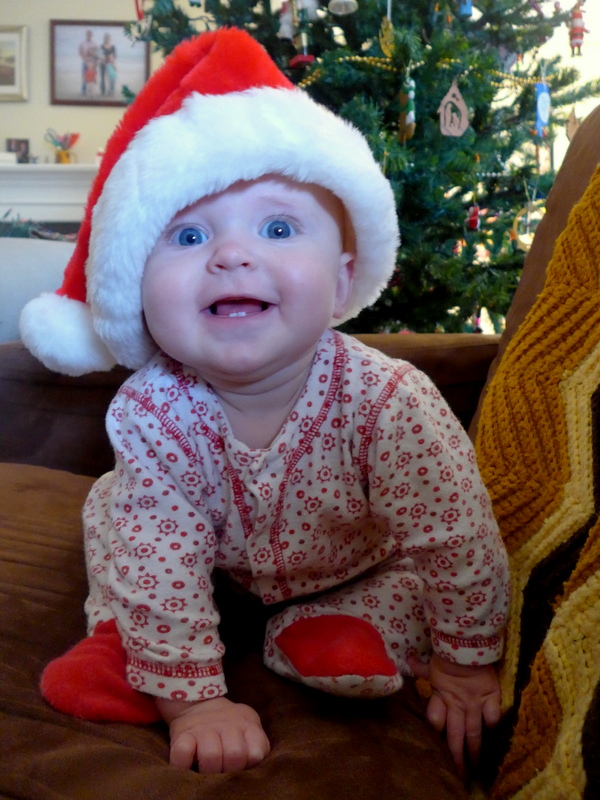 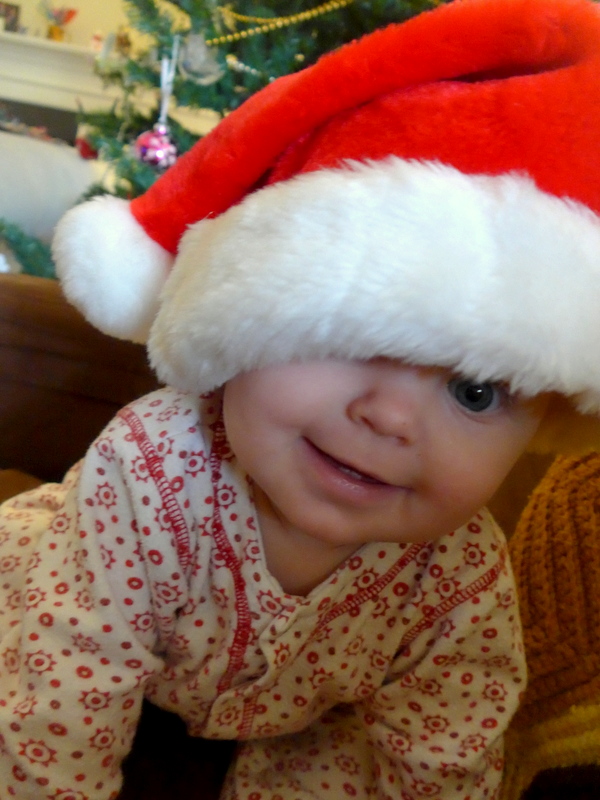 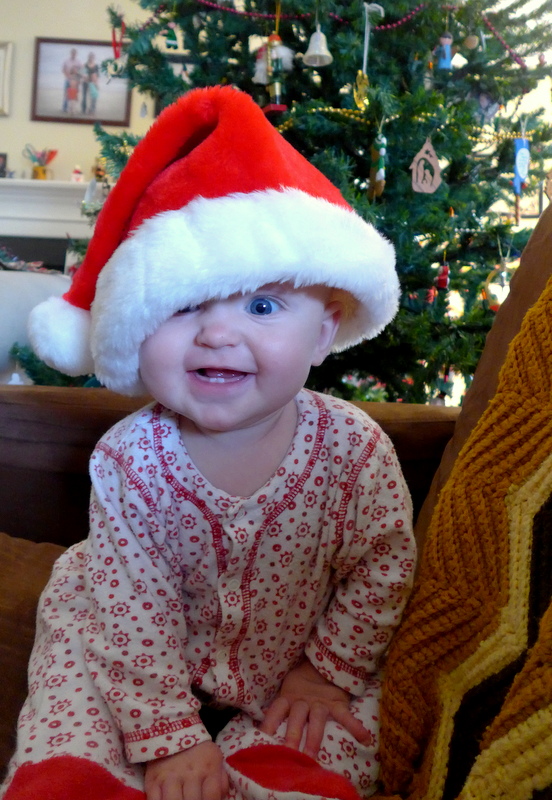 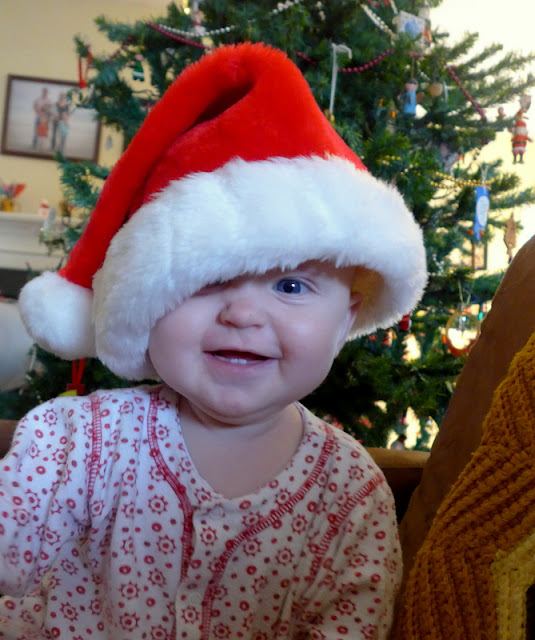 After the tree was mostly decorated, Benjamin and Daddy left to run some errands (dropping Miriam off to play at a friend's house, hitting the library, and doing a little grocery shopping) while Rachel and I worked on stringing up the Christmas lights. The boys finished with their job first and came home to help us figure some things out.

Rachel and I did most of it by ourselves, though, and all the plugs are facing the right way and everything! 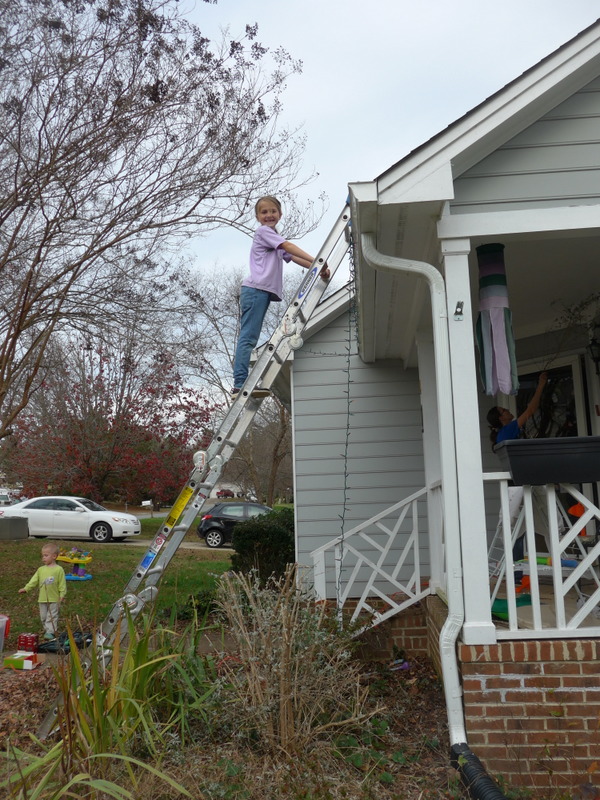 We had French toast for dinner to use up a loaf of bread that didn't make it into the stuffing recipe and then (after we'd eaten) my friend Kristin posted on Facebook that she was celebrating National French Toast Day today. Because we have one of those apparently. You can google it.

I asked Andrew if he knew about that before he suggested French toast and he had no idea so we were accidental observers this year (though I'm sure next year it will be on purpose because we celebrate pancake day quite religiously—that's Andrew's favourite food—and French toast is quite closely related to pancakes).

Benjamin walked in on Andrew cooking and said, "Don't burn yourself again, Daddy!"

And then he flipped a piece of French toast onto the floor and scooped it up with his already burned fingers, yelping, "Ow! Ow! Ow! Ow! Ow!"

Benjamin was not impressed.

After dinner we went on a family walk so that we could admire our house from the outside and also make sure that we weren't the only crazy ones who decorated before December. We also had to walk down the street to see Darth Vader. Our neighbours set up a whole bunch of lawn...balloons...and one of them is Darth Vader with a Santa hat on and my kids went completely gaga over it when we went for a walk on Wednesday afternoon. They had to show Daddy.

While we were walking Miriam found several dandelion puffs so she picked three of them and said, "Hey, Benjamin! Rachel! Anyone want a wish?"

She was so sweet to ensure a wish for her siblings as well as her self.

When we got home we had bath time and play time and story time before bed time. The kids played LEGO in Benjamin's room so nicely. Miriam built another Christmas tree (this time with ornaments) as well as a skinny Santa ("No one likes a skinny Santa!"). 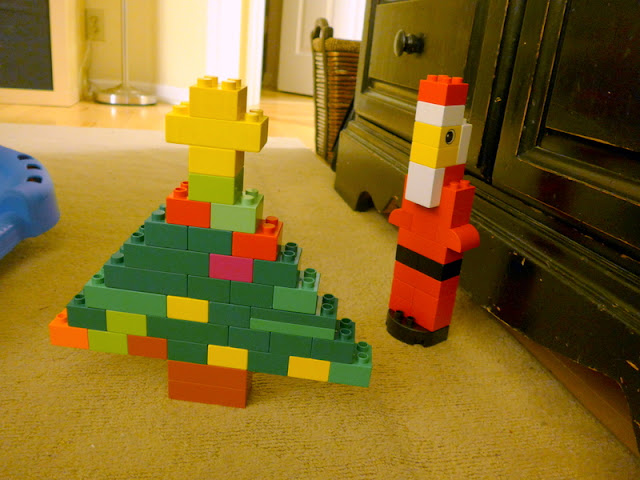 Rachel stole the steam puff from Benjamin's Thomas the Tank Engine costume and used it as a Santa beard. All she wants for Christmas, she says, is her other front tooth. 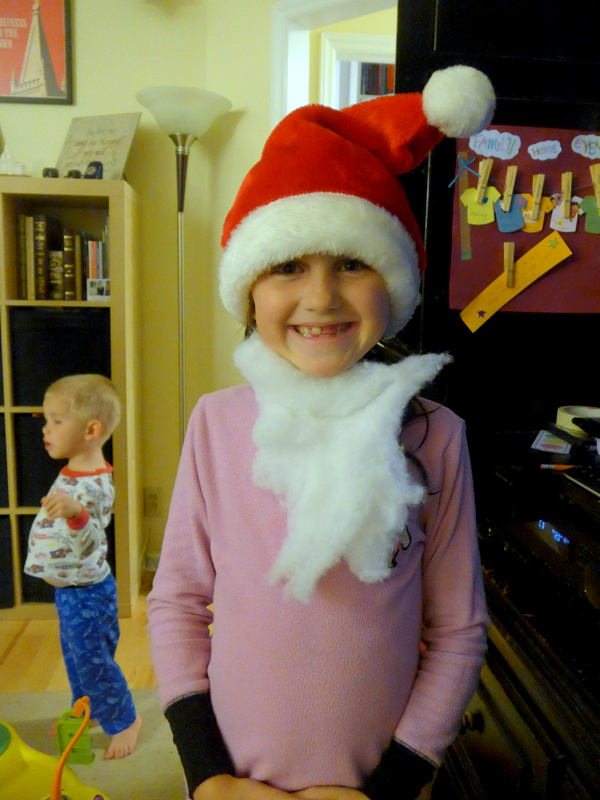 These kids sure have a way of keeping life magical.

"Where did all the butterflies go?" he asked.

"It's too cold for butterflies," Andrew told him. "They only come out when it's warm."

They went on with what they were doing for several minutes, long enough to have moved on from butterflies, when Benjamin asked, "Why don't you have a sweater on?"

"It's too warm for a sweater," Andrew said.

"Then where are all the butterflies?!" Benjamin fumed.