One small step for man

You might not believe it from the way things look tonight (Benjamin wet the bed and Zoë is sitting on my lap playing with her toes) but we've made some giant leaps around here lately. I know I've "called it" several times before but I think Benjamin's oh-so-close to being fully potty trained. Like, I just did laundry today (after not doing it all weekend) and there was no pile of stinky underwear in the bathroom, which is pretty miraculous.

And as for Zoë, well, she has started sleeping for hours at a time. Literally hours. She'll go between four and six hours before waking up now and it looks like we're finally leaving colic behind because she doesn't often stay up to just scream for the heck of it anymore. We might just survive her babyhood after all!

She's starting to enjoy her exersaucer:

We got it from some friends a few months ago. I claimed it without seeing it so I was a little surprised to find out that it's the exact same one we had when Rachel was a baby!

It's probably not the same exersaucer (because ours ended up in Washington with cousin Michael) but it is the exact same model. How crazy is that?!

She's also working on sitting up on her own. She's getting really good. This picture was from last week when she was just starting to balance without her arms. We tried to catch her in a "look, ma, no hands!" pose, but we failed. So this'll do... 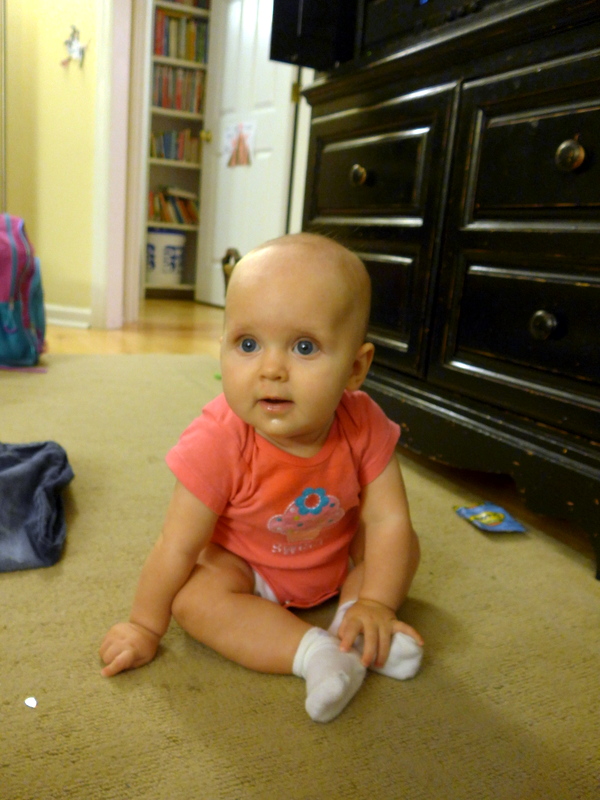 I was going to write about Zoë's eating adventures this evening here, but the pictures are so fantastic that they deserve their own post.
Posted by Nancy at 12:09 AM