My grandma's viewing went well. It was nice to get to mingle with relatives I haven't seen in a while, including my sweet little niece and nephews. See how cute we are?


When did we all get so grown up? I'd like to know. I love how Rosie and Josie showed up in coordinating outfits—lace and pearls (Josie and I had that covered at my grandpa's viewing). Kelli showed up with Zoë while we were taking this picture (she'd been off changing her diaper) and wanted in on the action, so here's another take: 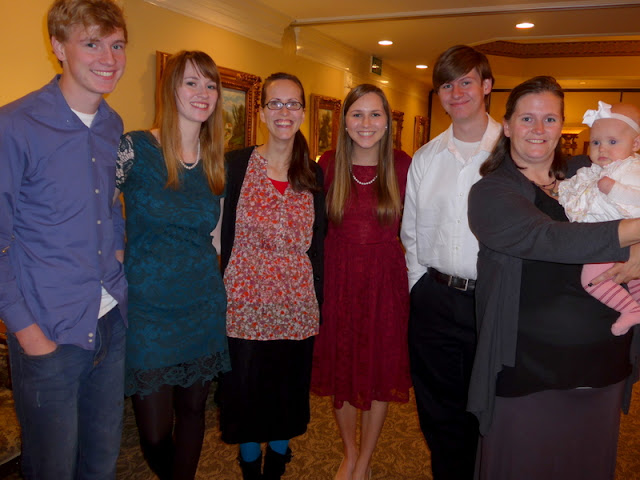 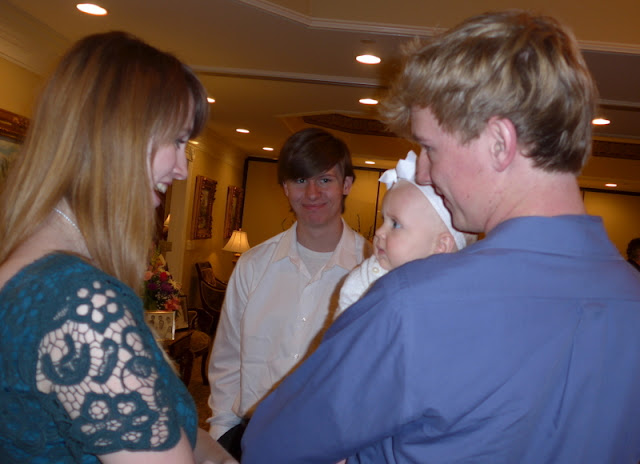 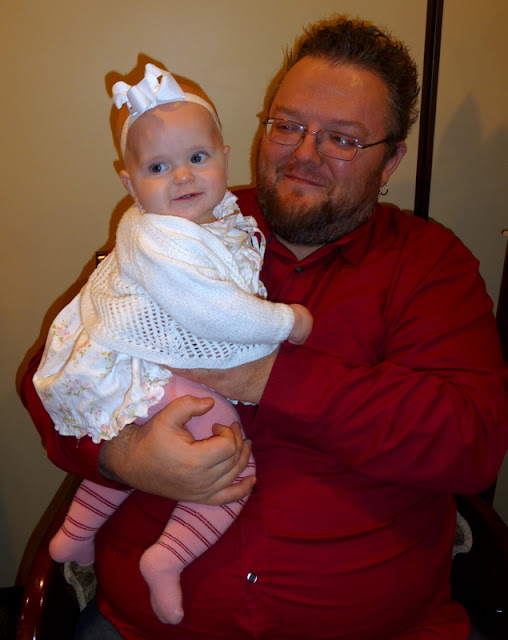 And here she is meeting her second-cousin, E: 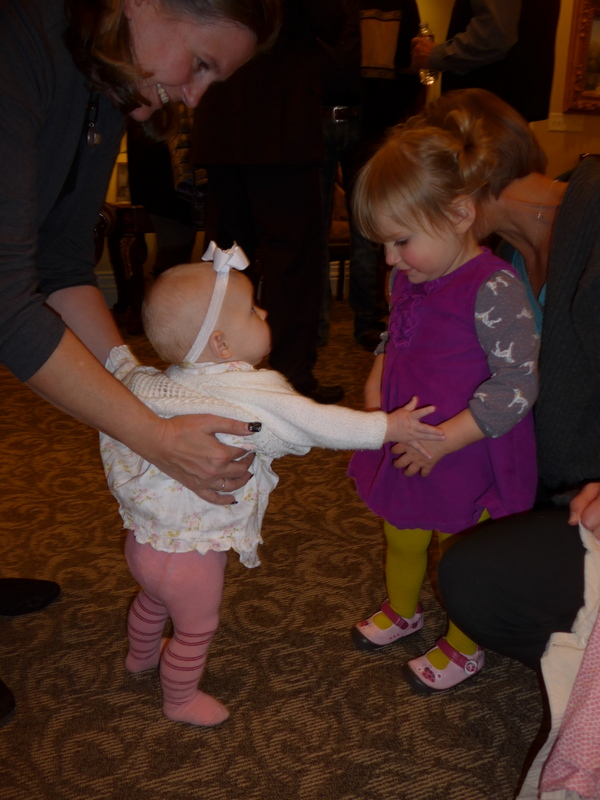 I meant to get a picture of Zoë with both E and A (my cousins' babies) but it didn't happen, so this picture will have to do, I guess.

The viewing went well, except that the slideshow that Josie had worked so hard on wouldn't play on the machine at the mortuary. It wasn't a huge deal to not have it playing because we also put pictures up around the room, but it would have been nice if it had worked. Thankfully we were able to get it to play at the viewing before Grandma's funeral.

Saturday was such a long day. We were doing funeral stuff from morning until mid-afternoon! We had the viewing in the morning and then the funeral, the dedication of the grave, and the family luncheon.

We rode with Grandma's friend Pat Toone from the church to the cemetery and she told us all about her husbands.

She's buried four of them. "I got started early!" she laughed. Her first husband died in a drowning accident when she was 39 and still had a handful of children at home. He was working in California, I think, building something or other by a river and he got knocked into the water (and, apparently, unconscious) and they never saw him again. Two years later they were dredging a river and they found a jaw bone that had some teeth still in it. They were able to identify her husband using the dental records she'd provided for the police. It was a blessing that they found some remains so soon so that she could collect the insurance money, otherwise it would have been tied up for several more years before her missing husband could be pronounced dead. She used her insurance money very wisely; it's only just running out and she collected it in 1984.

Thirty-one years ago, I answered quickly when she wondered aloud how many years that was.

Now she thinks I'm really quick at math but really I was just born in 1985 and I know how old I am, so...yeah.

She married two men named Fred ("That's interesting, don't you think, to marry two men named Fred?" she asked). There was Doctor Fred (he was a doctor—her doctor who helped deliver her babies back when she was married to husband #1) and then there was Big Fred (but they were both big men, she said, but Big Fred wasn't a doctor).

While she was married to Big Fred they'd visit his wife's grave on Memorial Day and he'd ask Pat if they were still making payments on his burial plan and she'd assure him that they were, but when it came time to bury Fred, his children decided that cremation was the way to go. Pat tried to convince them that Fred wished to be buried by his wife, but the children were quite adamant. They didn't want to go to the expense of a traditional burial ("Even though it was already paid for!" Pat insisted) so Big Fred was cremated.

"Do you know what they do?" she asked in her sweet, squeaky voice. "They put you in a flimsy styrofoam box—it's blue—and then they push you into the oven, turn it up to a thousand degrees and then they cook you! They just cook you until you turn into a pile of ashes! They cook you! Isn't that a terrible thing, to be cooked up?!"

I don't know. I think every funeral that I've been to has involved a casket and a burial, but I also grew up hearing The Cremation of Sam McGee (by Robert W. Service).

It's a pretty popular poem in Canada.

There are strange things done in the midnight sun
By the men who moil for gold;
The Arctic trails have their secret tales
That would make your blood run cold;
The Northern Lights have seen queer sights,
But the queerest they ever did see
Was that night on the marge of Lake Lebarge
I cremated Sam McGee.

The first verse introduces Sam, who was from the south, a much gentler clime than the Yukon Territory, which is where the poem is set:

Now Sam McGee was from Tennessee, where the cotton blooms and blows.
Why he left his home in the South to roam 'round the Pole, God only knows.
He was always cold, but the land of gold seemed to hold him like a spell;
Though he'd often say in his homely way that "he'd sooner live in hell."

The last verse (and a half) goes like this:

I was sick with dread, but I bravely said: "I'll just take a peep inside.
I guess he's cooked, and it's time I looked"; ... then the door I opened wide.

And there sat Sam, looking cool and calm, in the heart of the furnace roar;
And he wore a smile you could see a mile, and he said: "Please close that door.
It's fine in here, but I greatly fear you'll let in the cold and storm—
Since I left Plumtree, down in Tennessee, it's the first time I've been warm."

Even at eight years old I understood that this poem was hilarious (we studied it in grade three). Winter can be so, so cold. So cold, in fact, that it still doesn't seem real to me that we're starting to decorate for Christmas—you know, when my kids are playing outside with bare feet and t-shirts! It feels almost balmy outside. It's only winter when the cold "through the parka's fold it stabbed like a driven nail."

At any rate, cremation has never seemed quite as scandalous to me as it did to poor Pat Toone!

My grandma, however, was buried next to my grandpa. My brother David was one of the pallbearers. Here he is placing his boutonnière on the casket: 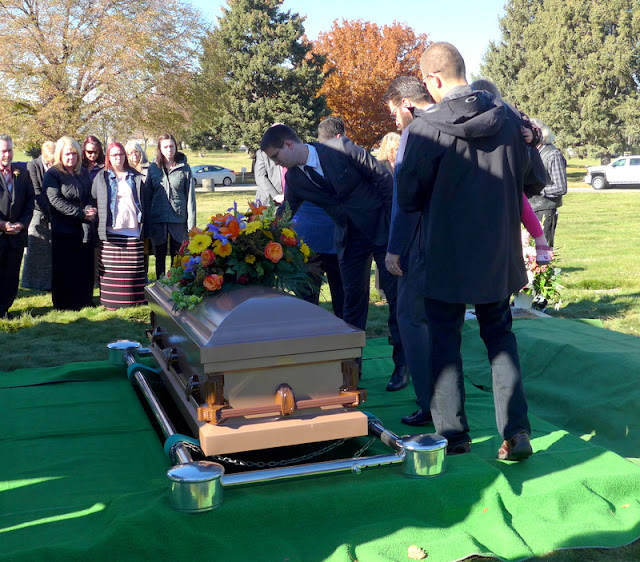 The luncheon after the gravesite service was lovely. I was a little late to it because I had to sneak off to pump, so by the time I came back some people were already finished eating. Allen had played Amazing Grace during the funeral service, but he had his friend April sing, so I mentioned that I'd been hoping to hear him sing, since I've never heard him sing in person before. Allen graciously brought out his guitar and played a few songs—one that he'd played for his grandfather's funeral, one that he'd written, and then a few more just because little E and A were dancing around and it was too cute to stop!

Here's Zoë being a little fangirl (she touched his guitar!): 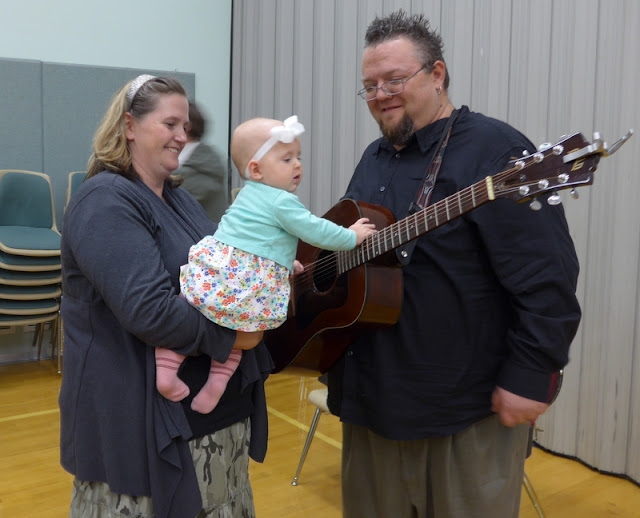 And here's a picture with my cousin Shannon (on the right), who also left her kids at home with her husband. It's kind of too bad that we only see each other at funerals. She has a three year old as well (he was born in March, Benjamin was born in June) and from what I hear they'd probably be as thick as thieves if we ever got them together. Unfortunately, Shannon lives in Washington and we live in North Carolina, so...getting together is tricky! 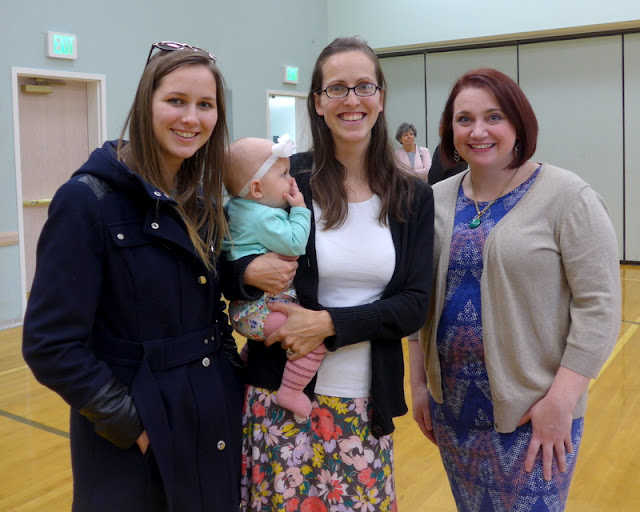 Still, it was nice to get to see her and visit for the few minutes that we did. That's what this whole trip felt like—visiting with so many loved ones for such a short time! It's a good thing we have weddings and funerals to encourage us to get together, though, otherwise we might never make the effort (as sad as that is).
Posted by Nancy at 10:03 PM