A little bit of Christmas...

Last night we attended Rachel's winter concert. It was fun to get to see her perform again, though Miriam brought along some Christmas search-and-find books in case she got bored. When Rachel acted offended by this Miriam said, "Rachel, I've already watched you perform this concert twice."

Miriam watched her perform at the mall and at the school assembly yesterday afternoon. I suppose three times is a lot of times to watch the very same concert. Still, she only looked through the books before the concert, politely tucking them under her chair when the show began. 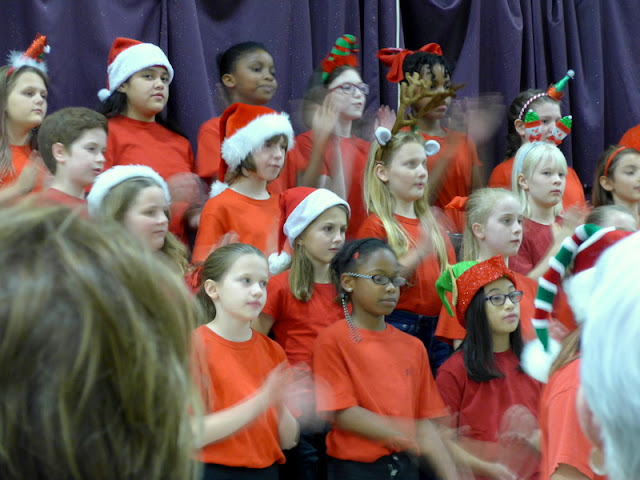 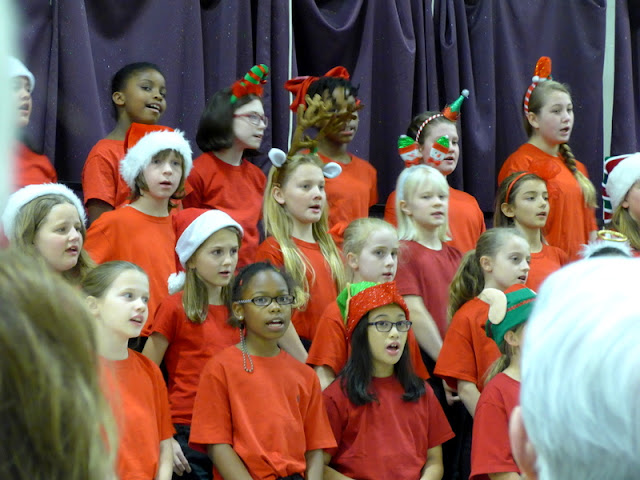 Today Miriam came home wearing a candle wreath for St. Lucia day (which is today). Her teacher is Swedish (though I've never heard a Swede with such a strong southern drawl; I'm quite sure she was raised here) and likes to share a bit of her culture with the children. 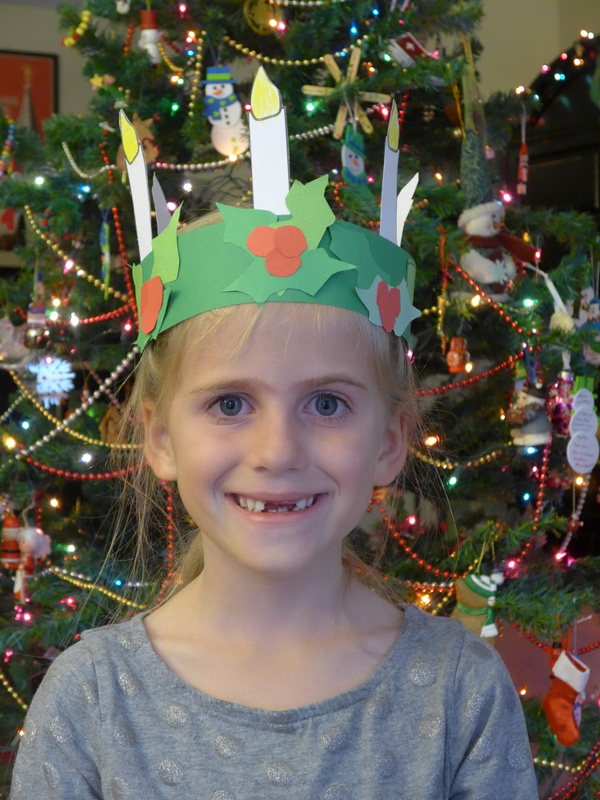 "That looks like mistletoe!" he declared. "Zoë! We must kiss!"

Then he scooped Zoë up and planted one on her. 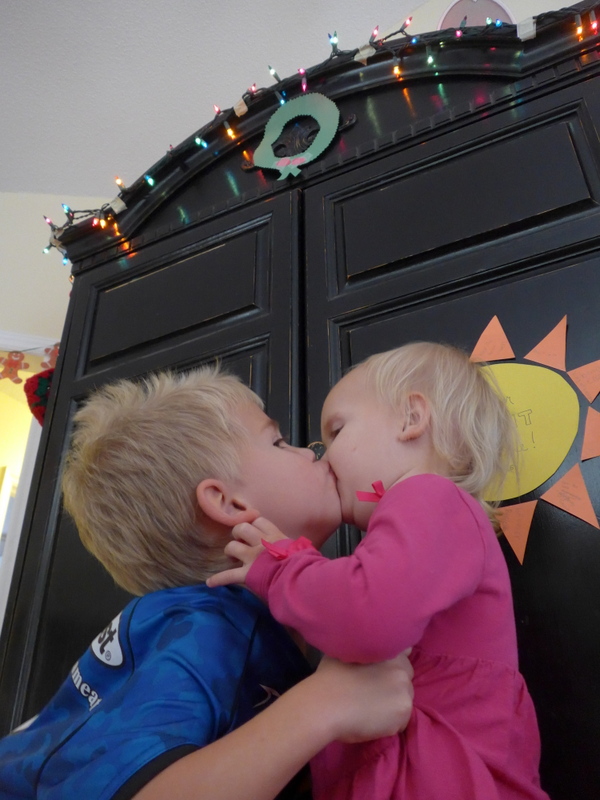 I had benches and chairs set up all around the perimeter of the living room to accommodate our little ukulele choir (which is far too big for our living room). It was literally wall to wall furniture in there! Benjamin and Zoë had fun hopping from seat to seat, all the way around the living room.

This arrangement also allowed them a better peek at the Christmas decorations, which are mostly out of their reach. Benjamin spent some time admiring our nativity set (that Andrew picked up in Ghana just a few weeks before Benjamin was born) before running off to find what he considered a great addition to the scene: 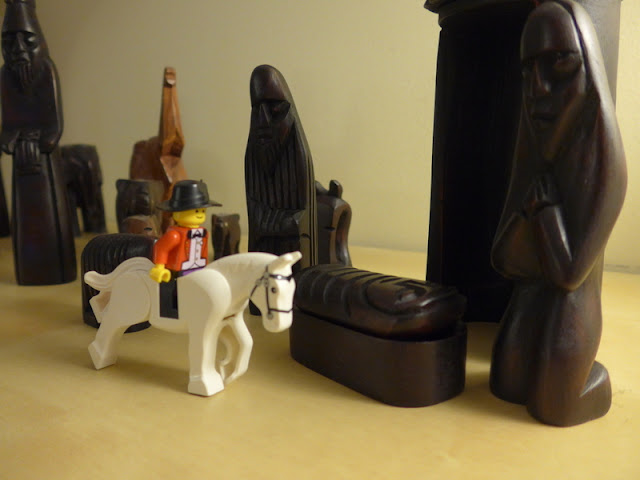 It's George Washington, on a white horse.

"George Washington wants to see Baby Jesus, too," Benjamin explained. "He's wearing a red coat but that's just because I couldn't find a blue one. He's still a good guy, not a bad guy, and he's not going to kill himself or anything. He just has a red coat on, that's all."

I suppose red is a little more Christmassy, anyway, even if it means he was on the wrong side of history.

And here's a picture of Benjamin colouring something or other, included simply because I love his little smile: 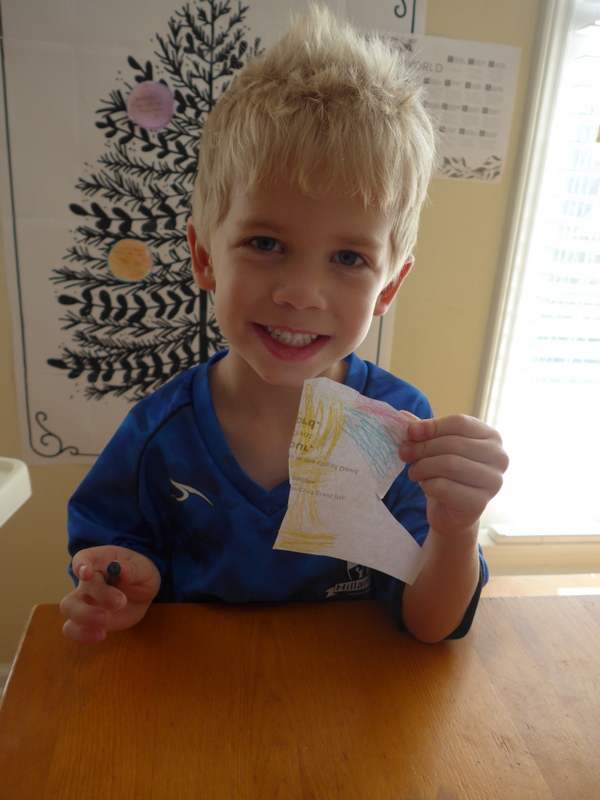 He's finally starting to want to decode language, which is great. Today he brought a paper to me that said AOEM and said it said Éowyn (yes, from Lord of the Rings). "Now, how do you spell Éowyn's father?" he asked. "I don't know," I said. "I don't know Éowyn's father's name."

"You can just help me spell father," Benjamin suggested.

(And Éowyn's father is Éomund, apparently (had to look it up)).

Benjamin wrote a letter to Santa the other day, to let him know that he wants a mail truck. It says, "BEM ZAMTA" and has a picture of a mail truck, which clearly means, "From Benjamin, To Santa. Please bring me a mail truck." 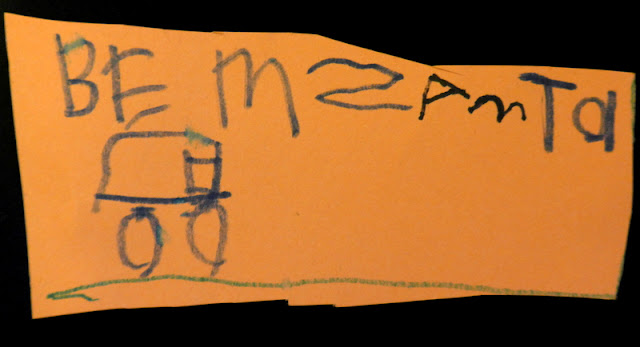 Miriam came off the bus singing a song she'd written on the ride home from school one day last week. She wanted to write down the lyrics before she forgot them (the tune is quite fluid, changing every time she sings it): 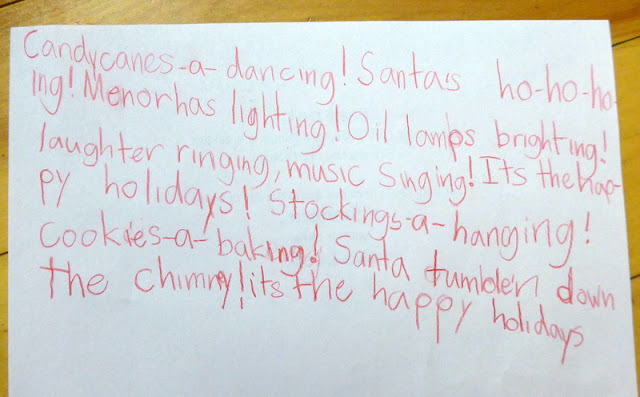 Stockings a-hanging!
Cookies a-baking!
Santa tumblin' down the chimney!
It's the happy holidays!

Benjmain decided that he need to write a Christmas song as well. He was quite adamant about getting the word "camdy came" in there but otherwise both the tune and the lyrics of his song are fluid and he changes them to suit his mood: 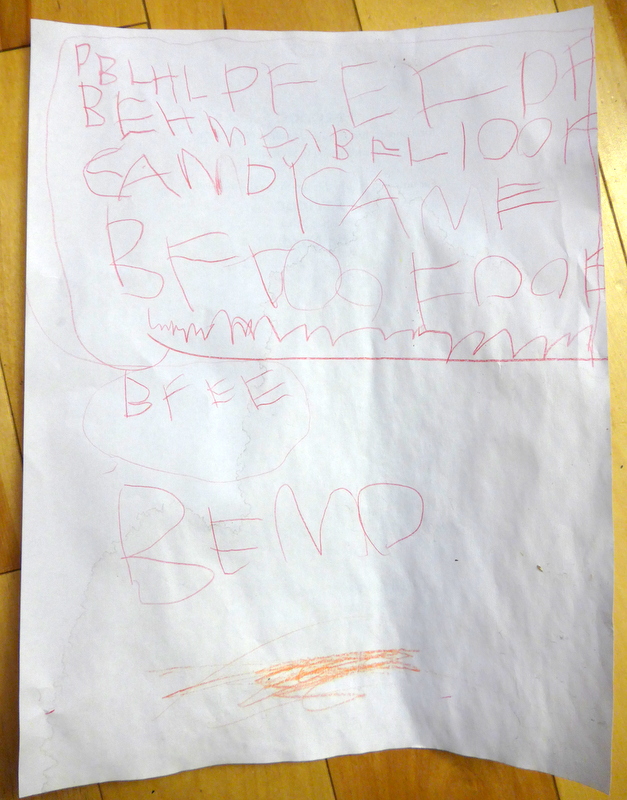 I can't believe this is our last week of school before we go on winter break!
Posted by Nancy at 3:58 PM