The Miracle of the Trash Bags

Our church put out an activity advent for Christmas this year, to help focus on ways that we can share Christ's light by doing things that He would do. Today's activity was to participate in a service project.

We decided to pick up trash around our neighbourhood. The kids were rather excited to do this and even brought a friend along. Because what's more fun than picking up trash? Picking up trash with a friend!

We grabbed a handful of old grocery bags and headed for the main road (because there's always a lot of trash along the main road). I woefully underestimated how filthy human beings can be, however, and we filled our pitiful supply of grocery bags incredibly fast. We still had a long way to go on our predetermined route, and we could see the path ahead of us was still, quite literally, littered with trash. Just when I began to wonder what we should do—because walking past all that trash without picking it up seemed awkward now that we were so far into the game—I saw in the grass yet another piece of trash: a thin, black tube of sorts. It took me a few seconds to process what, exactly, it was after I picked it up. A full-sized garbage bag?! What a find!

We filled them both—one on the way to the park and one on the way back home—as well as a few of our smaller grocery bags. We also picked up some campaign signs.

Here are the kids at our halfway point (we did stop to play at the park for a bit before heading home):


And here are Benjamin and Rachel after we returned home: 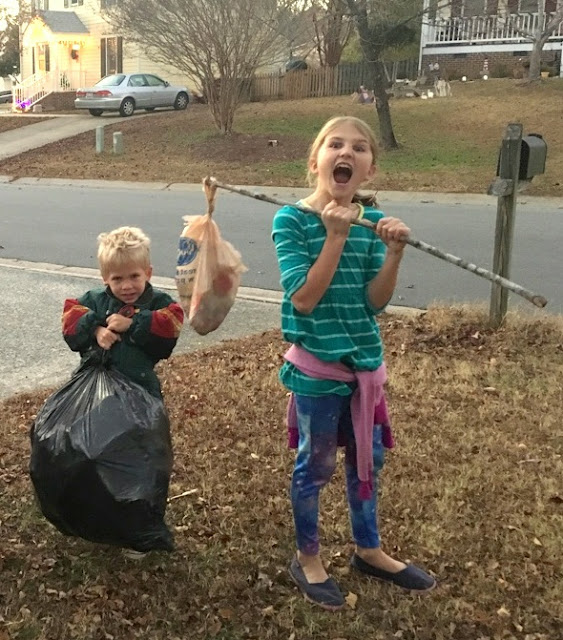 We had fun beautifying our neighbourhood together and the miracle of the trash bags nearly has me in stitches! If I had known our service project would have included a miracle I would have thought bigger—solving world hunger, or something along those lines. Had we done that we probably would have stumbled upon a pile of manna. As it stands, we attempted a small thing, which the Lord magnified into something greater than we would have been able to accomplish on our own (because while I might underestimate how filthy human beings can be the Lord, apparently, does not).