Tonight was our neighbourhood luminaria. It wasn't quite as well planned as in other years—instructions weren't distributed so no one quite knew when to light their bags which meant Andrew and some other neighbours spent a good half hour lighting all the bags up the street. And then we got to the clubhouse, where the main party was, and there were no bags lit there, either!

The effect was still beautiful, just not quite as magical as it has been in years past where we've only lit our own bags and the rest of the neighbourhood is already glowing. 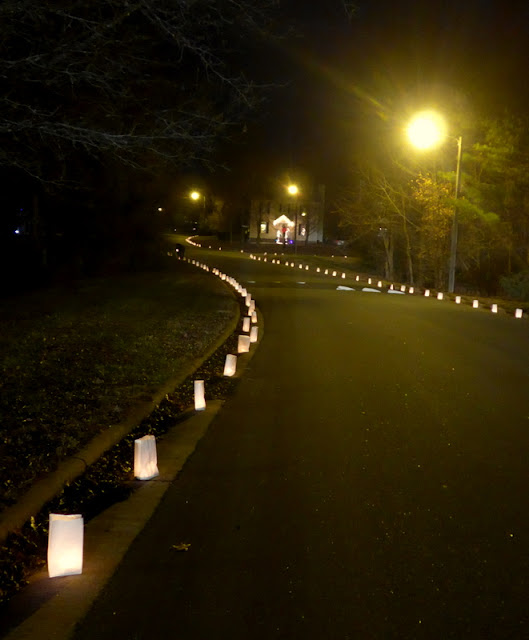 We've never managed to make it to the clubhouse for the Christmas party (though we've always walked around during the luminaria night) but I wanted to make sure we did this year because when I asked Benjamin what he wanted for Christmas he told me he wanted to meet Santa—and that was it!

I'm not very good at playing up Santa so my children have few precious years to believe.

There was no pulling the wool over Benjamin's eyes, however. He knew a phoney when he saw one.

"Aren't you excited to meet Santa?" I asked him because I was expecting a more jubilant response when Benjamin walked into the room and saw Santa sitting in the corner.

"Why not?" I asked. "I thought you wanted to meet Santa."

"Well..." I said, waving my hand in Santa's direction.

"Santa doesn't have glasses," Benjamin said, but he agreed to sit on the imposter's lap, anyway, and whispered in his ear that he'd like a mail truck for Christmas (Benjamin loves to meet the mail truck). It took Santa quite a few tries to un-code that phrase: Mayo Shuck! 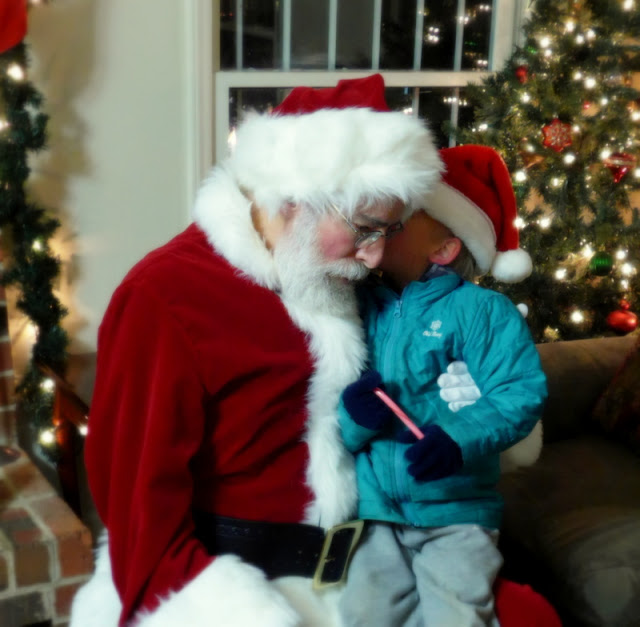 Here he is almost smiling with Santa: 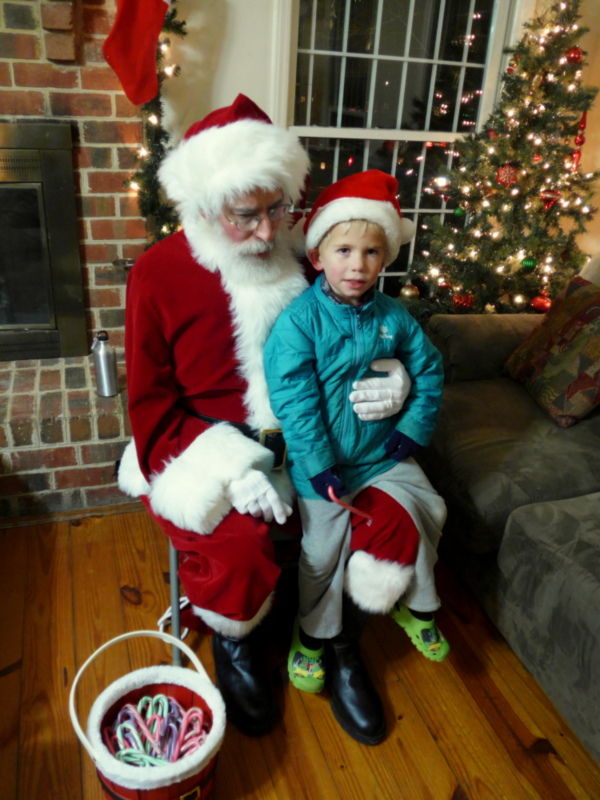 Miriam refused to smile or even look at Santa. She answered all of his questions while staring straight ahead. She'd like "a bunch of books" about "math and science, mostly." 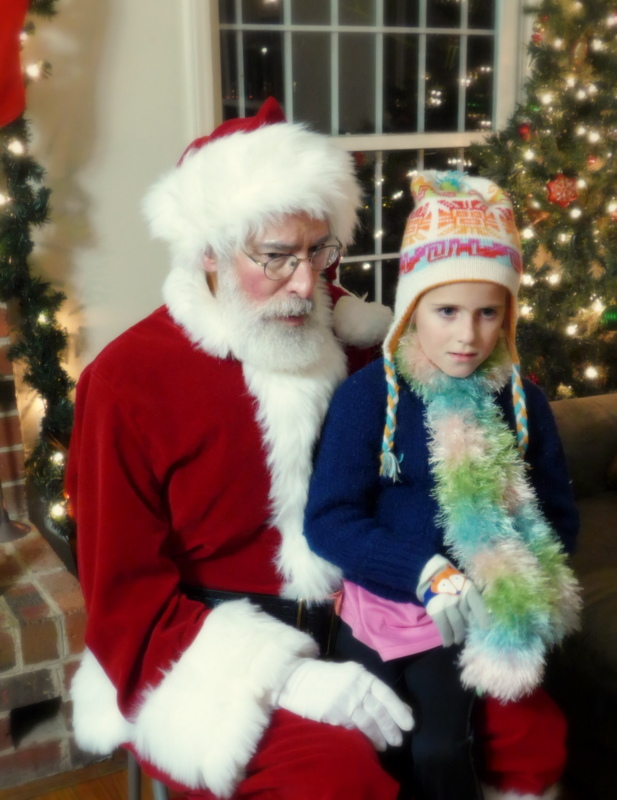 Zoë wasn't about to go visit Santa and although Santa is "a real bearded Santa with a beautiful Santa suit" and "is a graduate of the Santa Claus Conservatory," he seemed to be a rather timid Santa so I didn't want to foist a screaming baby onto his lap. 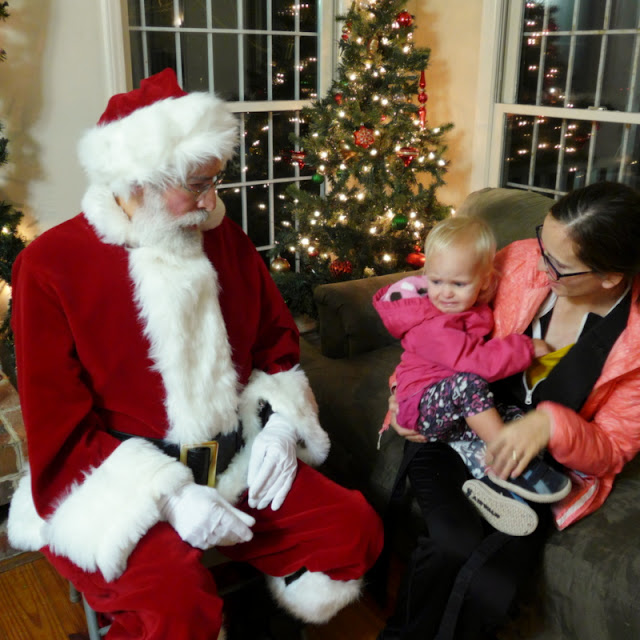 She sat on my lap while he tried to wow her with his glowing thumbs. She remained wary. 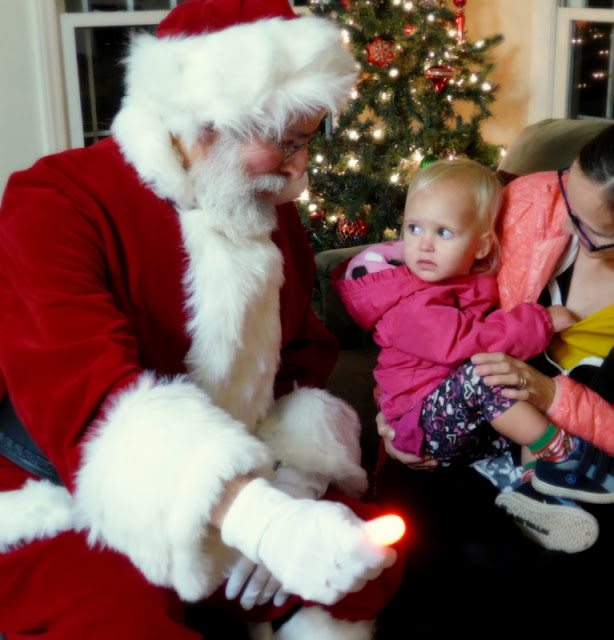 When Santa asked what she wanted for Christmas, Zoë shot back, "For you to leave me the heck alone!" Just kidding. She didn't say that. But I'm pretty sure she would have if she could have.

Rachel made it quite clear that she's altogether too old for such nonsense, but agreed to go up for a picture with her friend (they're dressed like twinners, but that was completely coincidental): 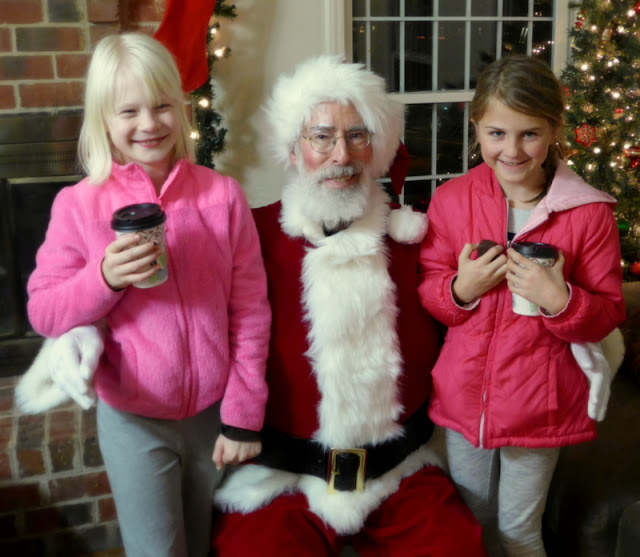 Rachel also would like "Books, lots of books," for Christmas.

Keep it simple, kids, and you will never be disappointed. Start throwing out things like "pony" or "an iPad" and be prepared to suck it up.

It's really cold right here right now, and we're not used to it at all. It's 27°F (-3°C), so I'm sure my sister up in Canada is laughing at us (it's -9°F/-23°C in High River right now...and it was even colder earlier in the week), but to us it basically feels like death is knocking at our door. It's downright chilling!

We were shuffling home through the freezing night air, nursing our cups of hot chocolate and cider when Benjamin announced that he'd forgotten his favourite gloves back at the clubhouse.

Zoë had decided that she'd had quite enough of today's insanity—first we drag her out in the cold, then we try to stick her on some old dude's lap, then we drag her back out into the cold?!—and since I had her in the front carrier it really was wise to let Andrew go and send me home with the little ones.

So I continued shuffling along with Zoë, Miriam, and gloveless Benjamin, while Andrew and Rachel raced back to the clubhouse.

"Check the couch!" I called out to their retreating silhouettes. That's where I'd noticed Benjamin's Santa hat before we left.

We got home and I gave Zoë some of the apple cider I'd been hogging and we were just hanging up our coats and putting away our shoes when Andrew and Rachel arrived home! They'd hustled back to the clubhouse and then had taken the shortcut home—and they'd found Benjamin's gloves (on the couch)! They made excellent timing! 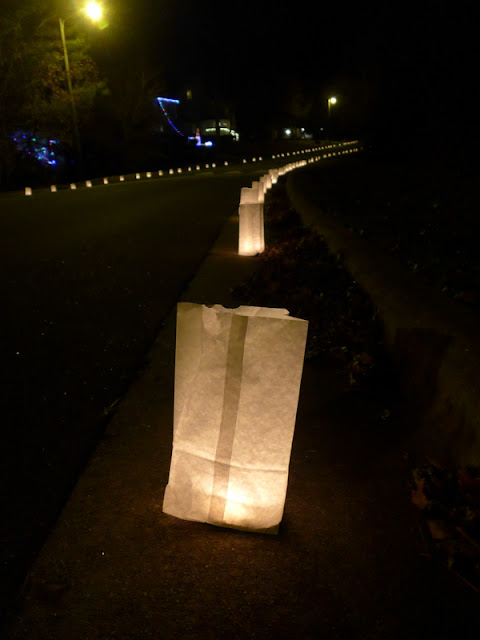 I certainly don't envy Andrew, who has to scooter to church tomorrow morning before things have warmed up at all. Brrr!
Posted by Nancy at 11:30 PM