We went to a friend's house to decorate sugar cookies yesterday morning and when we pulled up, the girls saw that their neighbour had put up a "little free library" in their yard, which was pretty exciting. We didn't borrow any books from it...but perhaps some day we will. 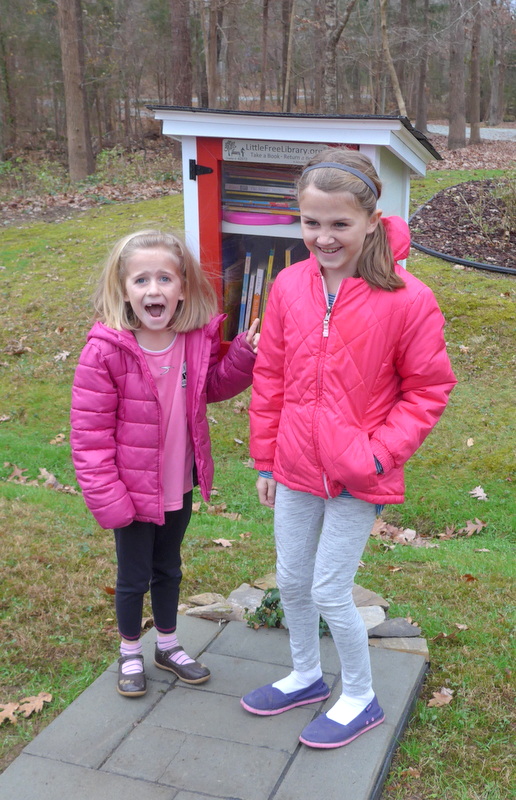 We were in too much of a hurry to get inside. My friend's kids had all run out in bare feet (not that my children ever do that) and were excitedly herding my children inside their house where we were welcomed by the aroma of freshly baked cookies. 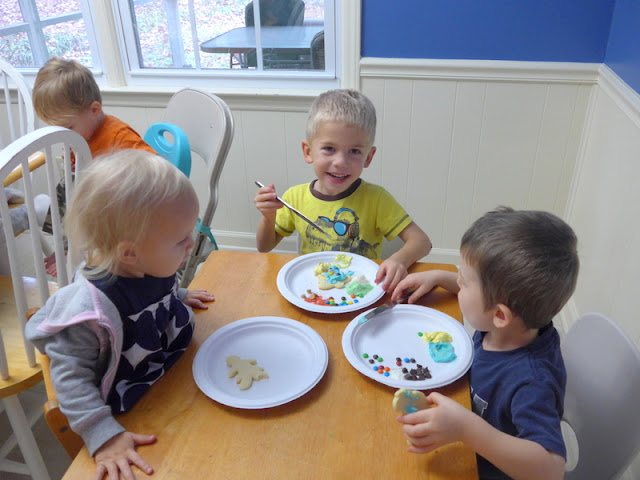 Obviously a little more domestically inclined than I am, every single batch of Marian's cookies came out of the oven a lovely golden colour (no burnt bottoms at her house). I'm so glad she decided to share her talents with our family! We got to experience all the fun with half the work!

The Hennessees came, too. Rachel was happy to have some older children there...not that she's that much older than Marian's oldest, but, you know who kids are. We had three adults and twelve children. Fortunately, only a few of them needed a lot of supervision. The kids had fun decorating their cookies and once they were finished they bundled up and headed outside to jump on the trampoline. 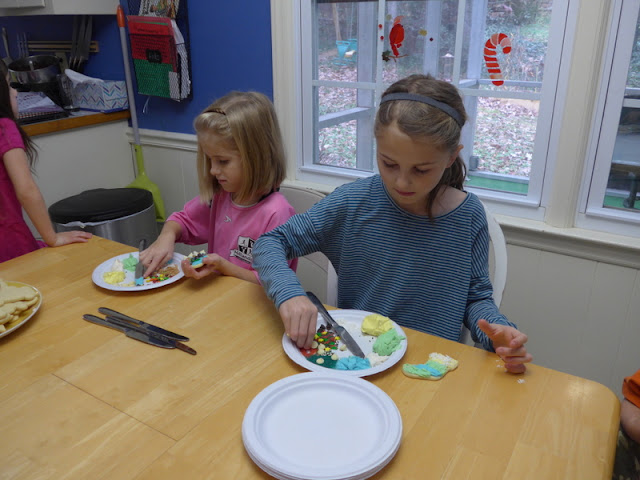 It was pretty funny to have those two around. Whenever Tim would address his mother, "Mom..." Zoë would pat me and say, "Momma," shaking her head at Tim at little, as if she were instructing him on who he should actually be addressing as "mom."

"Sweet girl," I told her. "Everyone has a momma. I'm your momma but Sister Hennessee is Tim's momma. She also goes by mom."

"Momma," she agreed, cuddling into my shoulder.

Our conversation didn't stop her from correcting Tim several more times throughout the morning. The silly boy was asking for it—he kept calling the wrong woman mom! Zoë has the only mom in the universe!

Now, if you'll pardon me the corniest segue ever... 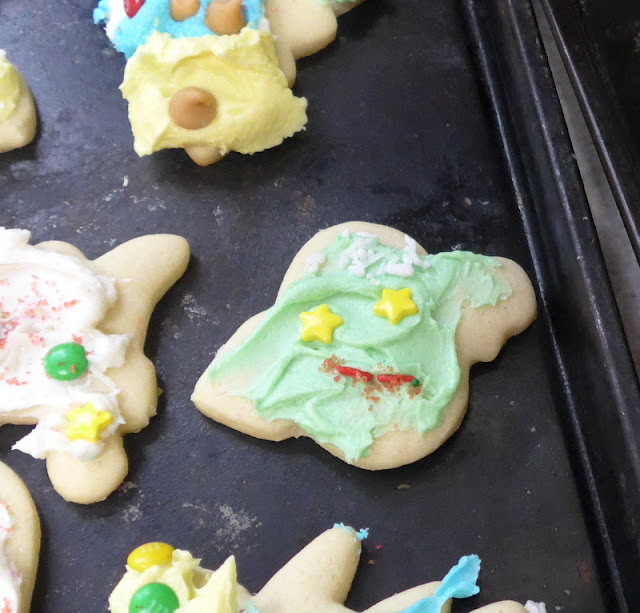 It's an ornament turned on its side that Rachel decorated as Yoda. I should probably note that it was I who held the ornament up sideways and said, "Haha! This looks like Yoda!" True, Rachel was the one to execute the idea, but it was my idea.

Chew on that the next time you think I don't like Star Wars, children!

Andrew actually took the girls out to see Star Wars on our anniversary eve (just as he did the day after our anniversary last year (only this year I also roped him into spending an evening out with me—last year we didn't even do that!)). He went to see it again on Saturday after the ward Christmas party when an impromptu Elder's Quorum "book club" was established with the design of going out to see the new Star Wars movie together.

"How many times have you gone to book club while I've stayed at home watching the kids?" Andrew (fake) taunted me (because I only go to book club after the kids are in bed and I always take our sleep-phobic babies with me...which means I haven't gone in months because I'm too tired to wrangle Zoë in public at such late hours anymore (she just barely went to sleep)).

Obviously I gave him "permission" but not without pointing out that I missed December's book club so that he could take the girls to Star Wars. Sheesh.

I have no desire to see the movie in theatres. Star Wars is too "pew-pew" for my taste, which is the line my kids translate into me "hating" Star Wars. I get bored of blowing stuff up really quick, so quick that I fell asleep in the theatre watching Star Wars once, just a few months before Andrew came home from his mission.

I was there with his parents, actually, on a "date" with Mehul, and I just...fell...asleep. I woke up during some lava-filled scene...meh. Anyway...

I've been teased about that indiscretion years now! But apparently Andrew's Dad fell asleep in the theatre when he and Karen went out to see the new Star Wars movie last week (and he's an avid fan of that universe). So now at least I'm not the only one!

Anyway, we had a lot of fun decorating cookies (and eating a few). 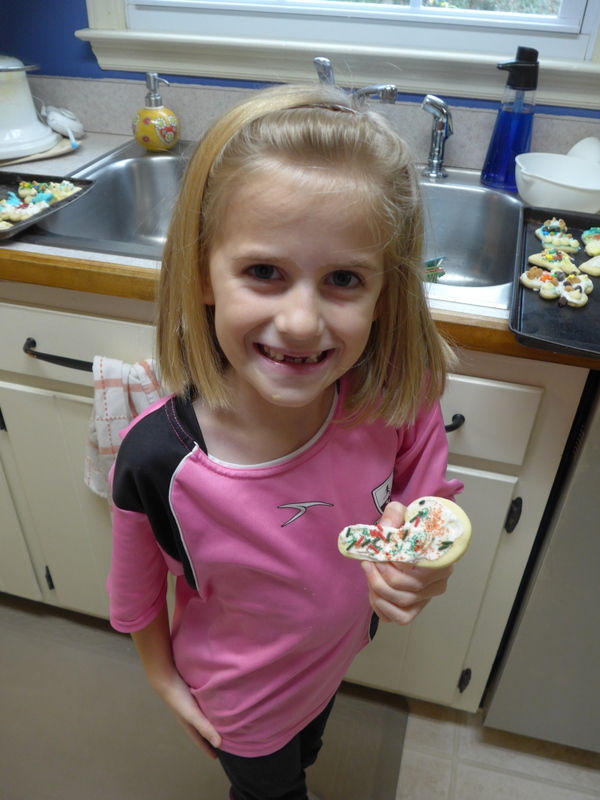 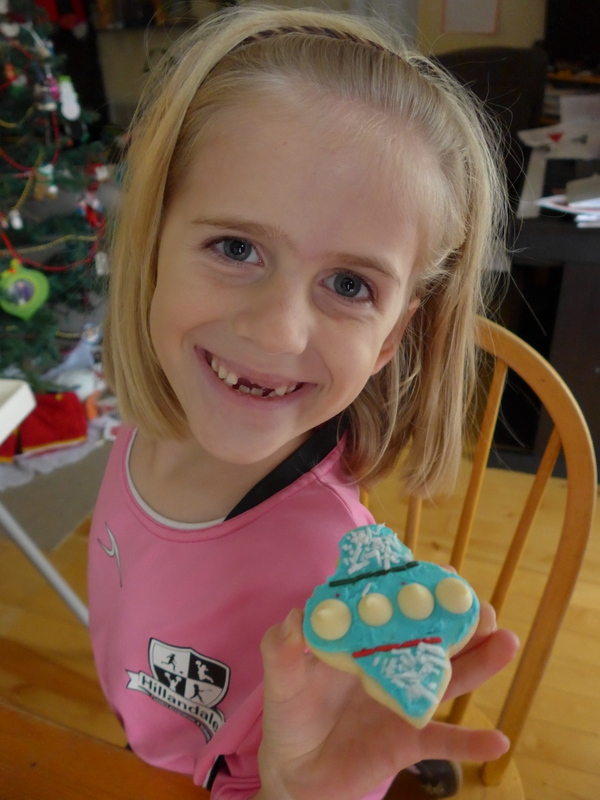 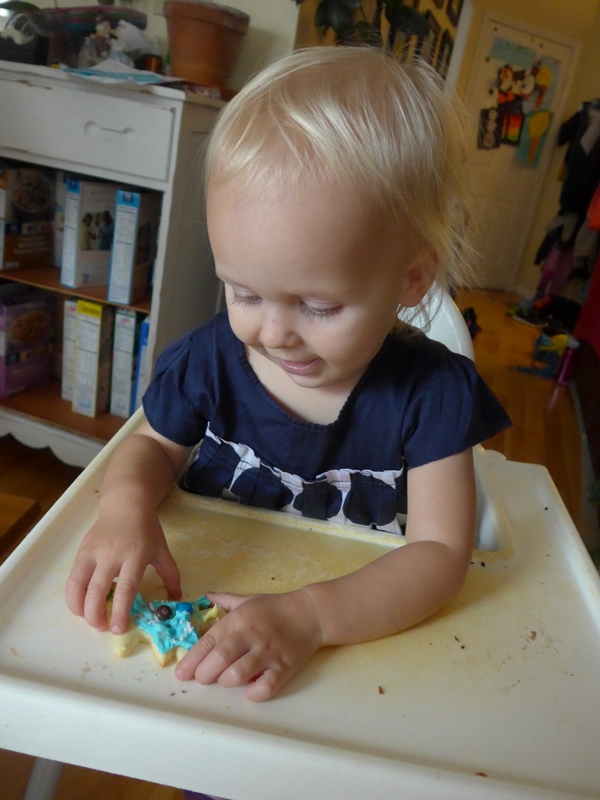 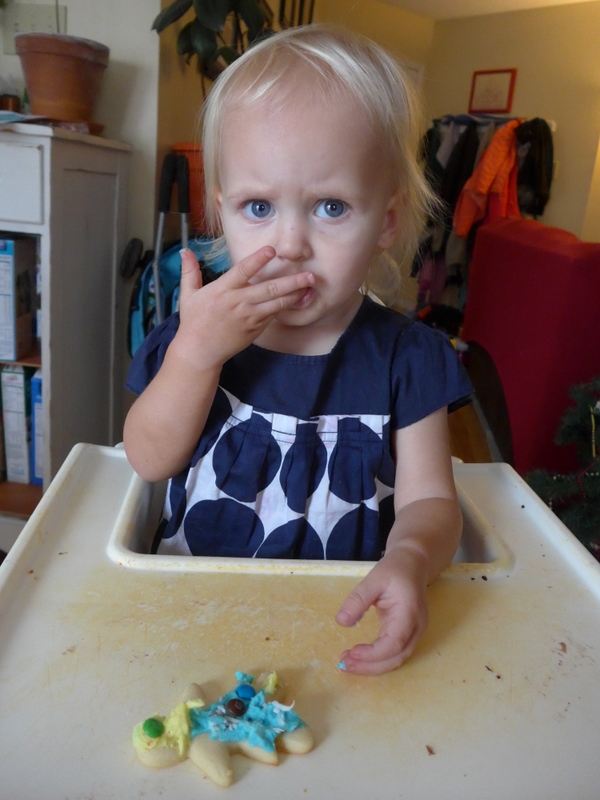 Marian sent us home with a tray of cookies. She has a bunch of old cookie sheets that she no longer uses for baking, but which she uses as trays for freezing or, you know, sending cookies home with friends. 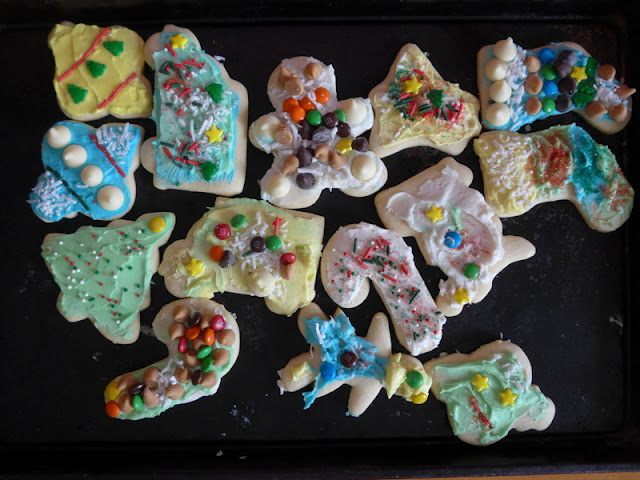 I washed it last night after putting the cookies into a tupperware container because I'd agreed to watch Marian's kids while she went to the doctor (for an ultrasound; I guess we technically had 12.5 kids at the cookie decorating party), which would be the perfect opportunity to give her tray back to her, right?

* I guess it was really the perfect opportunity to give it back. I just failed to do so.

Unsurprisingly, Rachel mostly hid in her bedroom reading, but in a surprising twist, Benjamin didn't play with Jay very much! Instead Jay played with Zoë (they're nursery buddies), Benjamin played trains with Marcella, and Miriam and Alden played LEGO.
Posted by Nancy at 11:16 PM