Earlier this week Benjamin started throwing out the word disintegrated left and right. I can't remember the context(s), necessarily, but it just kept coming out of his mouth.

"My lollipop disintegrated right in my mouth!"

"If I shoot a laser at the bad guys they'll disintegrate!"

"I just smashed up my cereal and now it's all disintegrated!"

We decided to do a little experiment on dissolving solids into liquids. We chose four things from the cabinet—oil, pepper, salt, and sugar—and then guessed whether things would dissolve or not ('dissolve' meaning that they would 'disintegrate' and 'disappear' and 'not dissolve' meaning that they would stay the same). Benjamin guessed correctly for all four things, though his reasoning was way off (sugar and salt would dissolve "because they are white and white is the same as clear and clear is the same as disappeared"). He had fun mixing and stirring and writing down his observations (and tasting the sugar water). 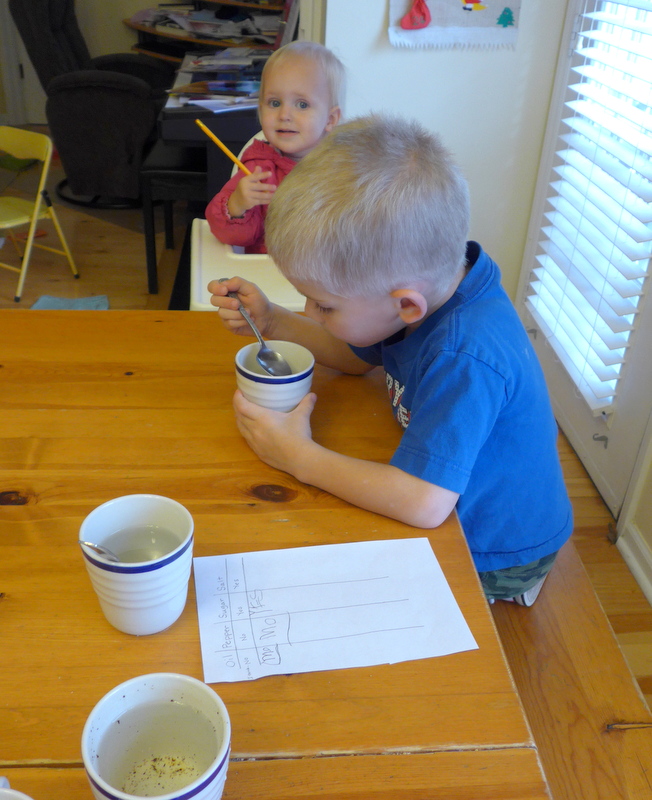 She learned a new word from this experiment as well: pepper!

It's rather hilarious to watch her say it because her P's are super plosive. She scrunches her face up and holds her breath while her "P" slowly builds up in her cheeks before finally letting it escape: "PEPPA!"