The theme for this year's ward Christmas party was "A Night in Zarahemla," and we were all instructed to come dressed as Nephites. We searched through our Tickle Trunk but everything kept turning up Middle Eastern, not Ancient American. 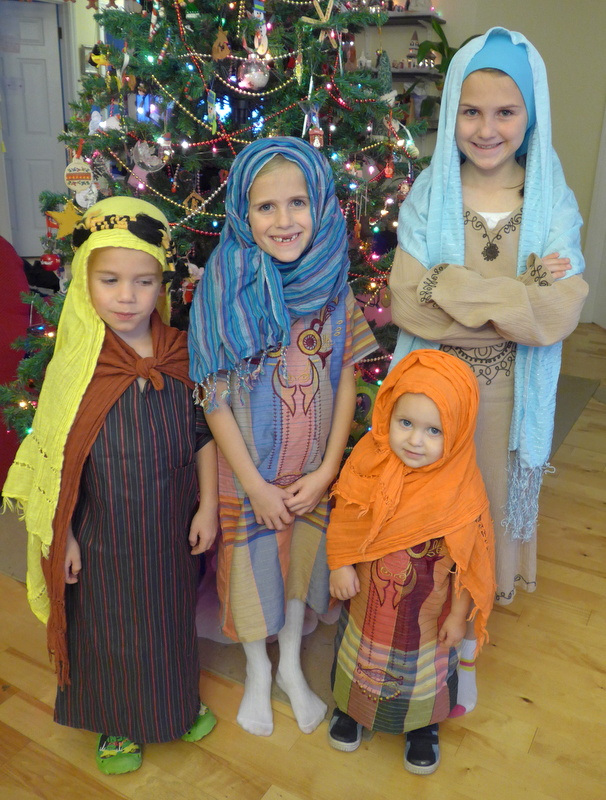 I had to include these next two pictures because of Benjamin and Zoë. First they look at each other, quite impressed by each other's choice of costume: 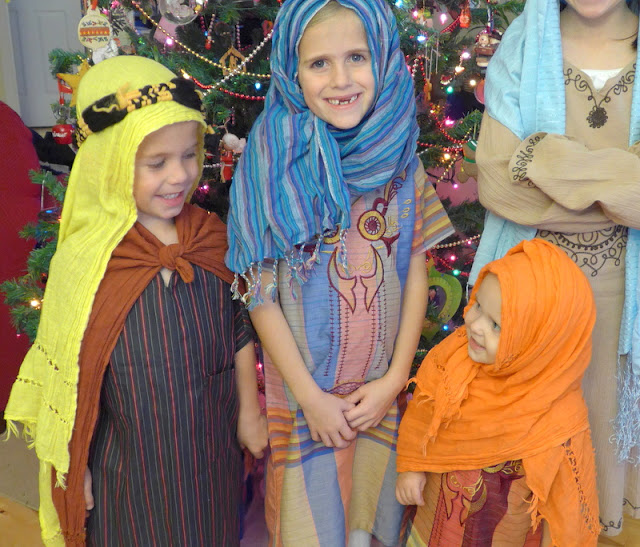 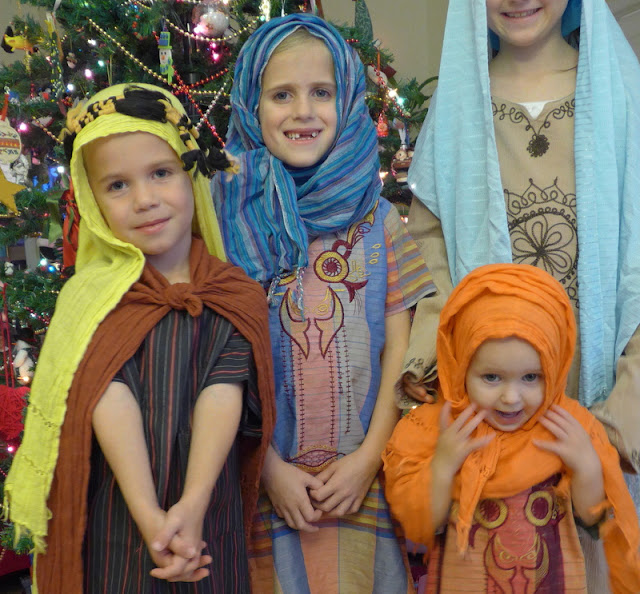 Here's one more...just because they're so cute! 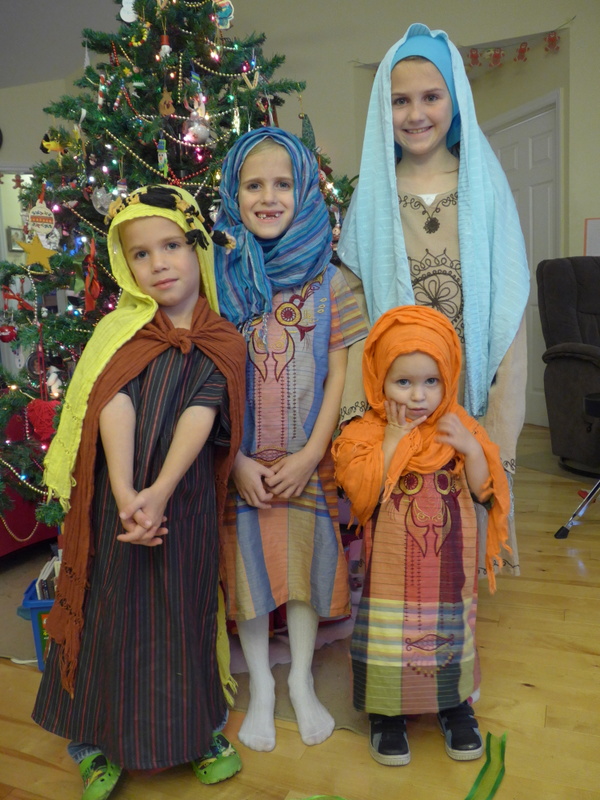 We ended up ditching the headscarves in favour for simple headbands, which sold our look as Nephites. (Benjamin would like it noted that he is a Nephite king, so now you know).

The gym was decorated with a spectacular "old city" made of styrofoam specimen shipping crates (which we managed to not get a picture of) and the children told the story of Samuel the Lamanite, who prophesied of Christ's birth from "on the city wall," complete with throwing jumbo marshmallows at poor Samuel to get him off the wall. 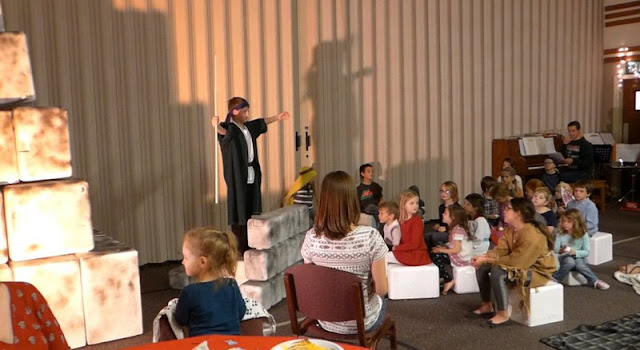 The children sang Samuel Tells of Baby Jesus. Rachel got to help act out his vision, playing the part of Mary. She's easy to pick out because she's the one with the blue scarf sitting in the "stable." 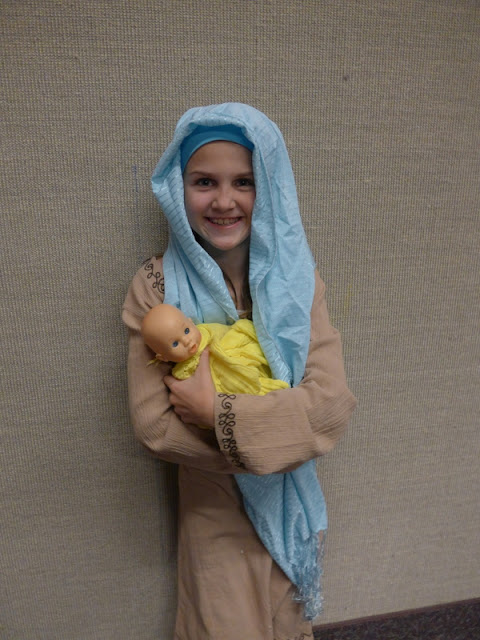 Miriam and Benjamin are less easy to pick out because they either blend in with the other Nephites sitting around or weren't there at all! I had to go chase Benjamin down in the hallway and tell him to get in the gym because it was time to sing (he'd been goofing off with his good friend Jay). Benjamin said, "Mom, I already sang! You must have missed it!"

"No," I said. "That was your practice. The primary is singing right now and you're missing it!"

We got there just in time for him to take a seat before they started to sing, but I think he missed out on throwing the marshmallows, which he was a little sad about. The moral of this story (Benjamin!) is to be where you ought to be when you're supposed to be there (just saying).

We've really got to stop calling him Baby Jay. This was his last week in nursery, so he'll be off to primary with the rest of the big kids (which is a good sign it's time to drop the "baby" part of his name).

After the children's skit and song our little ukulele choir played a few numbers. We've played at every Christmas party for the past four years, so this year we weren't planning on playing. In fact, we planned (and performed) a fall "concert" this year, so it was a little surprising to me when I found out that we were going to play at the Christmas party this year after all. It was fun to prepare some Christmas music, though, and to see how far we've come since we first started out.

The first time we played we played all three songs that we knew. And it was terrifying.

This year we had a hard time picking just three songs—we had trouble even selecting thirteen to play at the retirement homes we went to this afternoon! The kids wanted to keep adding songs to our playlist. So we picked three songs to sing...and even though we weren't as well rehearsed as we've been in years past (we seriously didn't pull out any Christmas music until after Thanksgiving this year—and that's pretty late for a musician to pull out Christmas music (but we'd been working on other songs since, you know, we weren't playing at the Christmas party)) we weren't as nervous.

Or at least I wasn't as nervous. It was quite a lot of fun.

We had the kids do Carol of the Bells with bells and handbells, and then we sang Christmas Day and Away in a Manger for everyone. Our last song was The Twelve Days of Christmas and we had twelve volunteers come up to hold a sign for their given day, to help everyone sing along. That song, I think, was my favourite. Everyone seemed to have fun singing together.

After we finished we had a sing along of hymns, which was also fun. I'm looking forward to church on Christmas because I hear we'll be doing a lot of singing as a congregation!

Here's a clip of the kids playing Carol of the Bells, with Miriam on the glockenspiel/xylophone/bells/metallophone thing (shows how much I know), accompanied by Rachel and some friends on the handbells:

The food at the party was excellent, but the signage was hilarious. I think we maybe heard this idea being hatched over Thanksgiving dinner at the Rogerson's house (I don't think I ever mentioned that that's what we did for Thanksgiving), because the bishop has this thing with guacamole—it's a traditional dish for family to have guacamole for every holiday meal and I think he even bore his testimony about guacamole once—and there was a discussion about having guacamole at a ward party and calling it Gadianton's Guacamole, which just got everyone going wittily naming various foods with a Book of Mormon twist.

But I wasn't 100% paying attention to the conversation (I feel like so often I never pay 100% attention to anything because I have too much to pay attention to—where's the baby?!) so I didn't realize it was for the Christmas party, but apparently it was because Gadianton's Guacamole was definitely on the menu this evening. 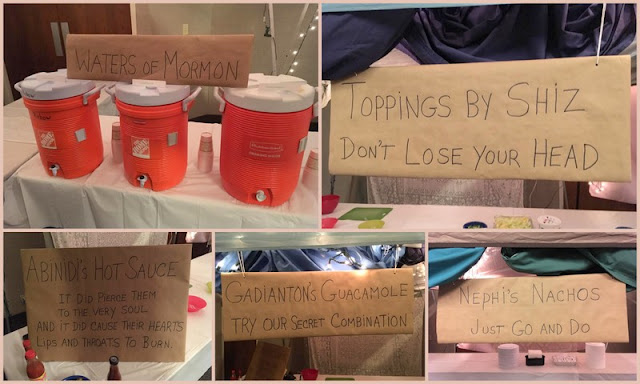 We had "The Waters of Mormon," "Toppings by Shiz: Don't Lose Your Head," "Abinidi's Hot Sauce: It did pierce them to the very soul and it did cause their hearts, lips, and throats to burn," "Gadianton's Guacamole: Try Our Secret Comination," and "Nephi's Nachos: Just Go and Do."

We missed getting a picture of the dessert table: "Shiblon's Sweets: Bridle Your Passions!"

Very funny...but also very much an inside-joke kind of thing. You'd have to read the book to really get it.

I think the favourite part of the evening was when everyone came together to knock down the "old city" when it was time to clean up. There were bits of styrofoam all over the church building from children (and fathers) kicking blocks around, but they all had a blast. So even though we spent an hour vacuuming to get the church ready for services on Sunday morning it was worth it...right?

I think the children will have great memories of this party for years to come (that city wall really was something—I can't believe we didn't get a picture of it!).
Posted by Nancy at 11:33 PM