Enfamil sent me some "belly stickers" for Alexander (because they love me, obviously (and they also want me to buy their products (which, I'm a milch cow, so...yup))) and he turned a month old on the 14th and they're sitting on my desk, untouched.

I should probably give them to some other mother who can keep on top of that kind of thing. One who actually remembers to stick a sticker on her baby's belly on the same day, every month, for an entire year...and snap a picture of it.

I'm not that kind of mother.

I'm not saying a mother who remembers to stick stickers on her baby's belly is a better mother than I am. Nor am I saying that I am above sticking stickers on my baby's belly. I'm not a Sneetch.

I'm just saying I'm not that kind of mother.

But, here is a picture of Alexander that I happened to snap on the 14th (his one month...birthday): 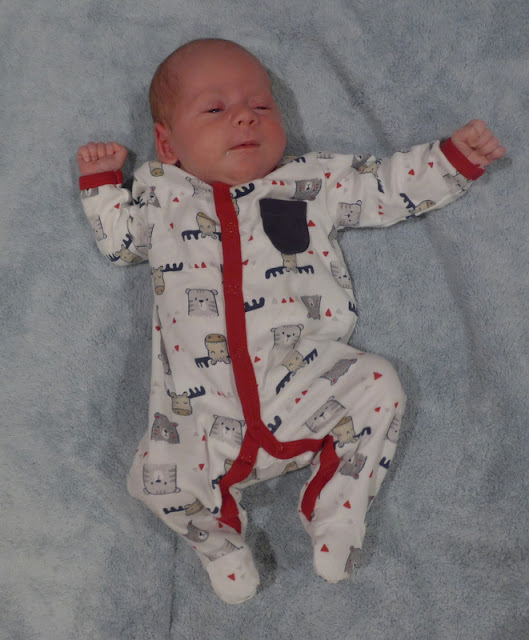 He wasn't in a very good mood, because he was having a rather "urpy day," as I tend to call them. He was just gassy and spitty and miserable. But I wanted a picture of him in this little outfit because I think it's adorable (Aunt Nicki sent it to us). I'll have to try to get another picture of him, one where his demeanour accentuates the cuteness of the outfit...before he *gasp!* grows out of it.

Time is moving far too quickly (yet also crawling along).

This newborn stage is my absolute favourite (despite how exhausting it is).

I find myself torn over being sad that he's finally started outgrowing things and being excited that he's growing into other things (because we have some cute stuff coming up (but stay little, would ya?!)). I am looking forward to that time when we'll lock eyes and he'll smile and coo...but I'm already missing his squishy newborn self.

We only have a few weeks of official newborn stage stuff left—and it's all passing by in a blur!

Am I relishing it enough?

Am I getting enough sleep?

Am I taking enough pictures?

When did I last shower?

Am I snuggling him enough to know that my heart will never forget how precious he is? 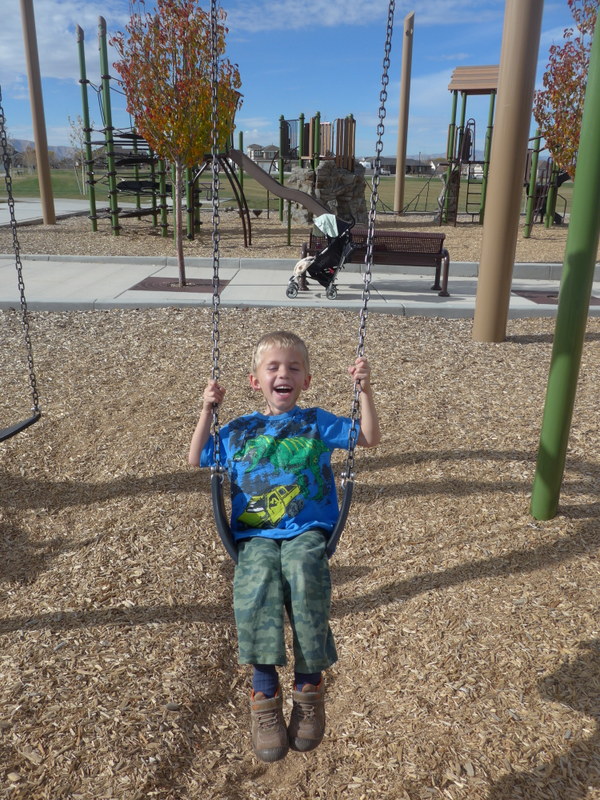 Of course I did!

Benjamin was once my precious newborn, too, you know. And I totally remember about him.

Most of the time.

It's just that this little guy sucks so much out of me: 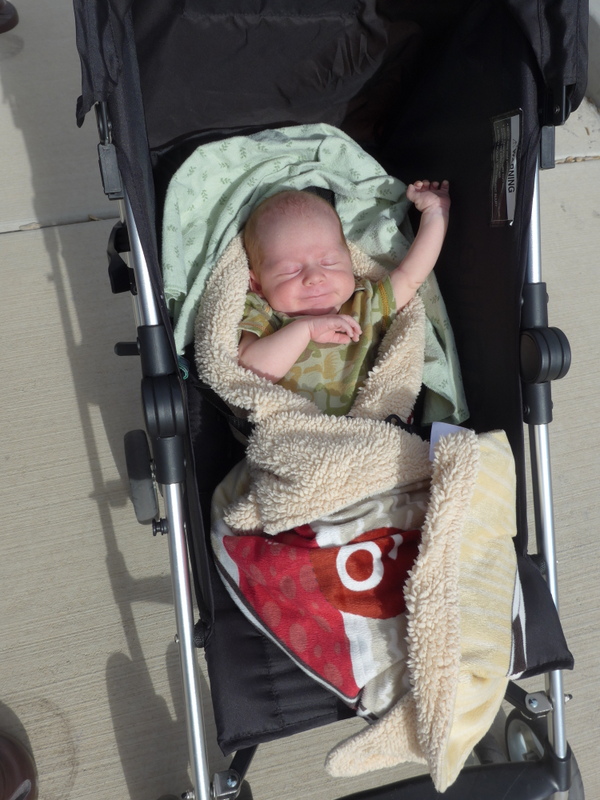 Today was such a beautiful day that I suggested to my visiting teacher that we just meet at the park for a picnic between AM kindergarten pick up and PM kindergarten drop off (we have about 45 minutes in the middle of the day when neither one of our kindergarteners is in school).

Before we left the park I begged and pleaded with my kids until let me take a few pictures of them together. With such unwilling participants, the pictures were doomed to not turn out great, but they turned out...okay...I guess.

Here's a picture of Benjamin with Alexander (before Zoë would grace us with her presence): 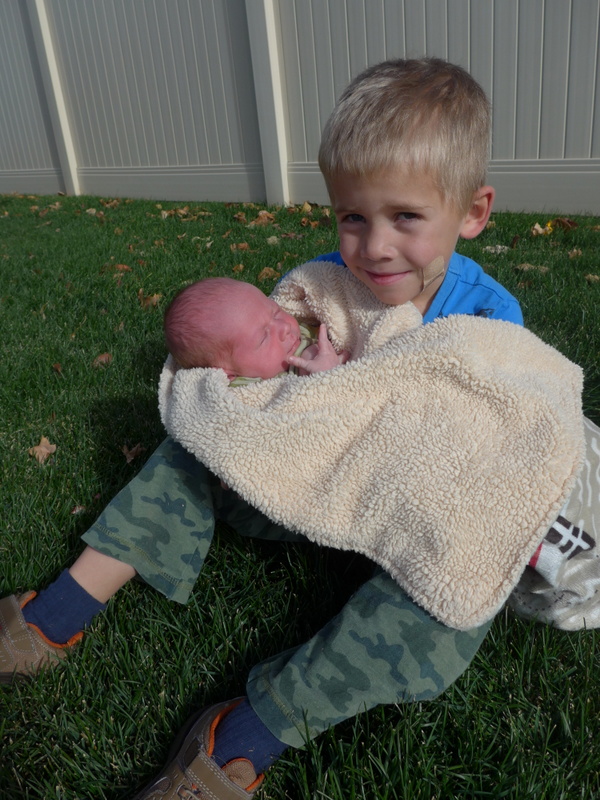 This evening Zoë went potty (at home, on the toilet, thank goodness) but I had been holding Alexander so I had to put him down so I could help her finish up (wiping's no easy thing).

"Can I hold him while you go?" Benjamin asked.

"Well..." I said again and he looked at me so full of hope that I gave in. "Will you promise you won't put him down for any reason?"

"You can't push him off your lap for any reason," I clarified.

"Like, if he spits up on you, you have to keep holding him."

"If he cries, you have to keep holding him."

"If he flails around and accidentally hits you or kicks you, you have to keep holding him."

"Does this mean I can hold him now?" Benjamin asked.

"It means you can hold him sometimes," I said.

He was pretty excited about that. I'm not even sure why because he's held him plenty of times (but I think it probably has something to do with being trusted enough to hold him alone (because we haven't quite gotten to that point with him yet (because he is so easily distracted and has simply stopped holding Alexander in the past (while we, thank goodness, were hovering nearby enough that we were able to smoothly take over the job of holding the baby)))).

Anyway, here are some of the three little ones together (obviously Zoë is way into this idea): 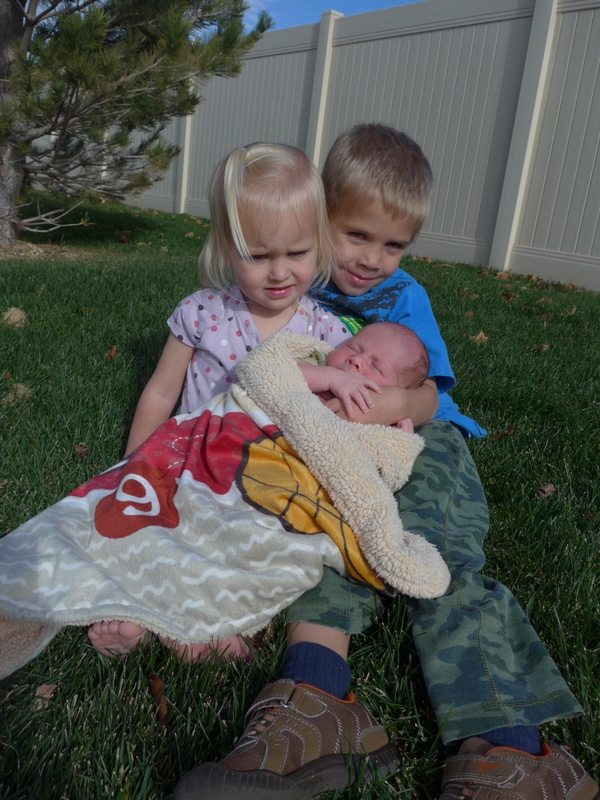 Believe it or not, Zoë really wanted to be the one to hold the baby in these pictures (doesn't her enthusiasm show?): 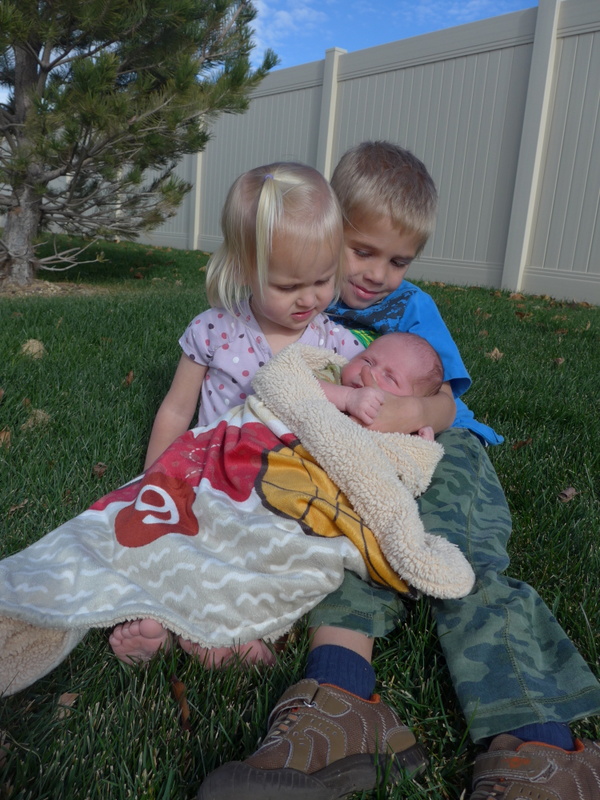 Their little faces in this picture are killing me: 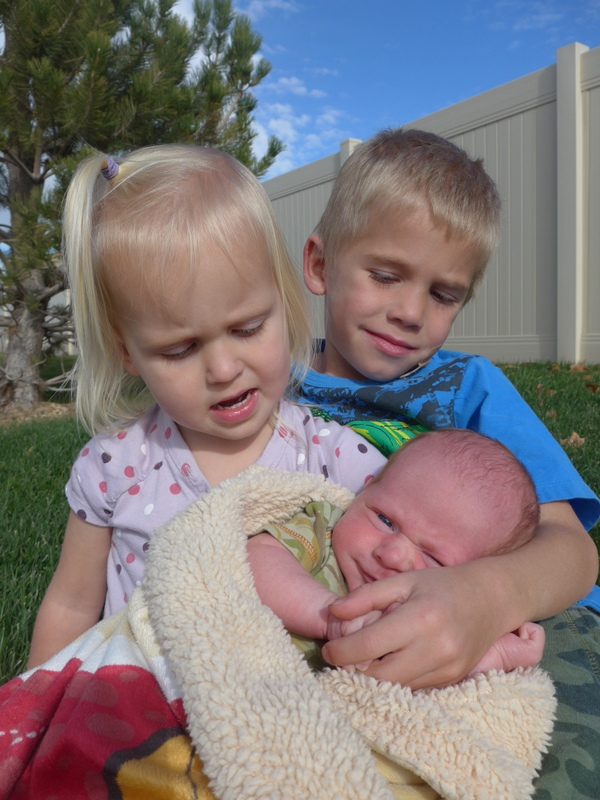