It snowed on Friday evening—big chicken feather flakes that had everyone's windshield wipers furiously dancing—and doubled Andrew's commute time. We made individual pizzas, watched Into the Spiderverse, put the kids to bed, and when we got up in the morning all the snow had already melted—which the children found rather disappointing because they'd been looking forward to going sledding on Saturday morning.

"We are still going sledding," I reassured them.

The mountain snow was what was relevant to our plans for the day because we'd planned to go sledding up Hobble Creek Canyon at Karolla's house.

"This isn't very much snow," Benjamin remarked from the backseat when we first entered the canyon.

"We're not very high up the mountain yet," I said.

"Will this snow fall on me?" Benjamin asked.

Here's Benjamin standing on a wall of snow by the road: 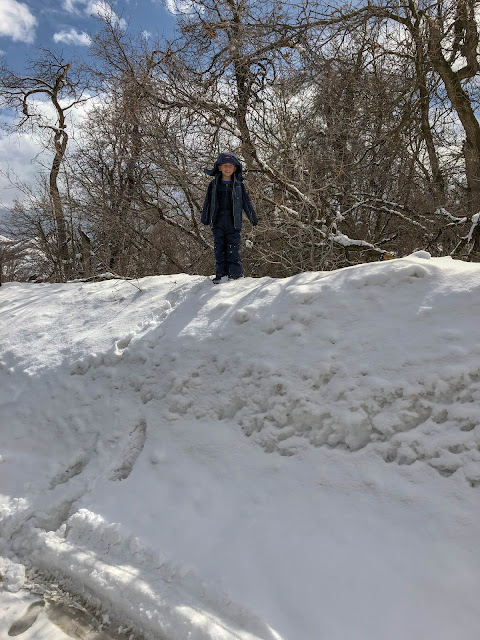 And Rachel and Miriam: 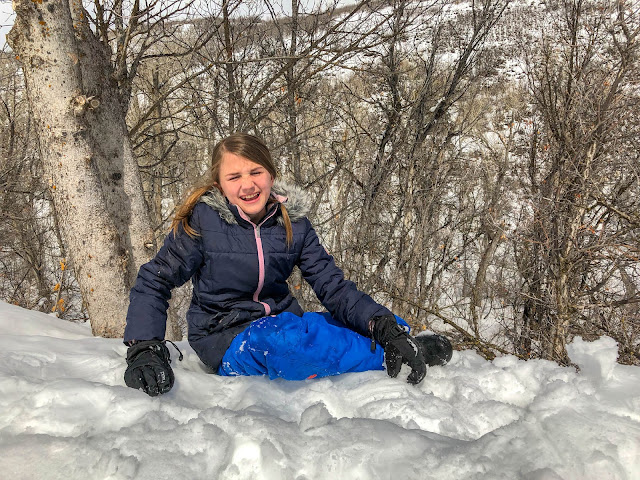 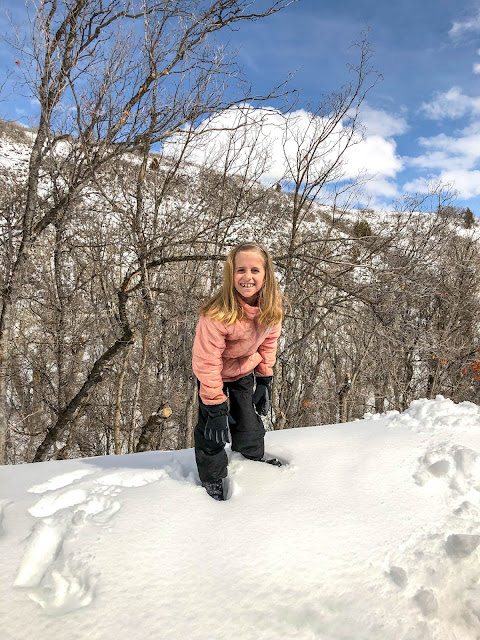 The sledding hill was just behind the house, though even walking that far was a challenge—the grown ups kept sinking into the snow, right up to our waists at times! But we eventually made it to the well-worn, well-trampled sledding path (which was covered with a thick layer of fresh snow, so still needed a little packing down).

Here's Benjamin zooming down the hill: 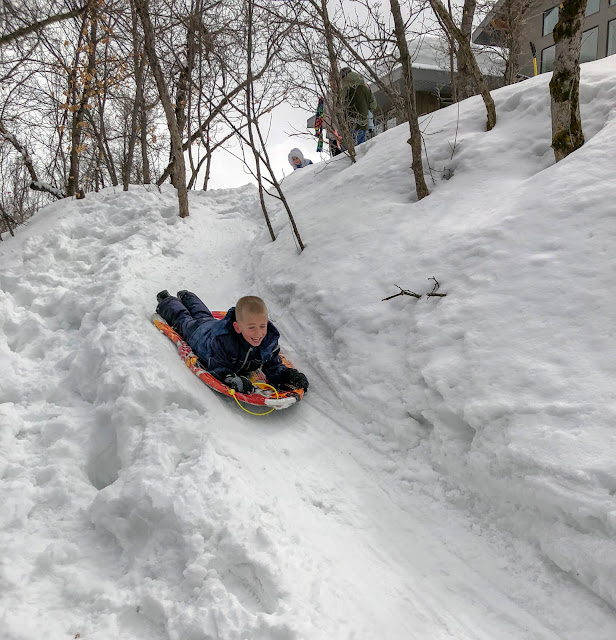 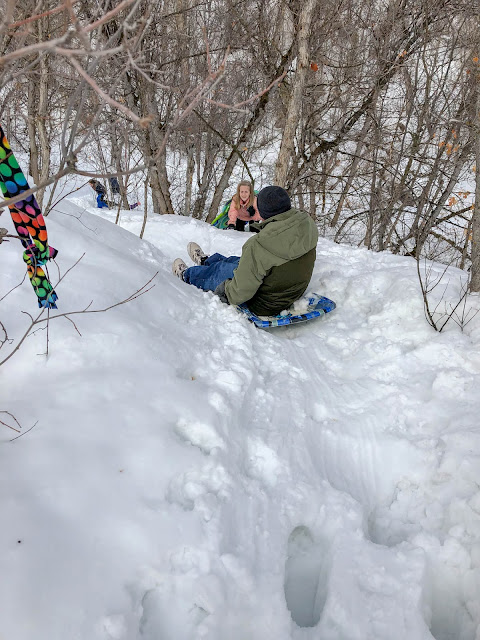 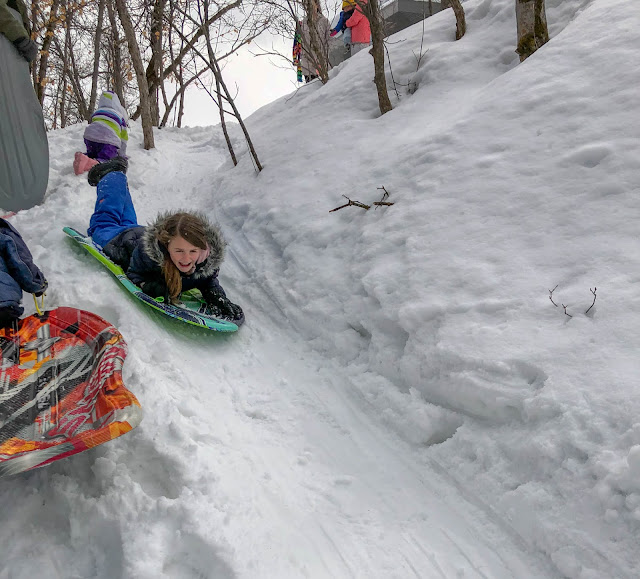 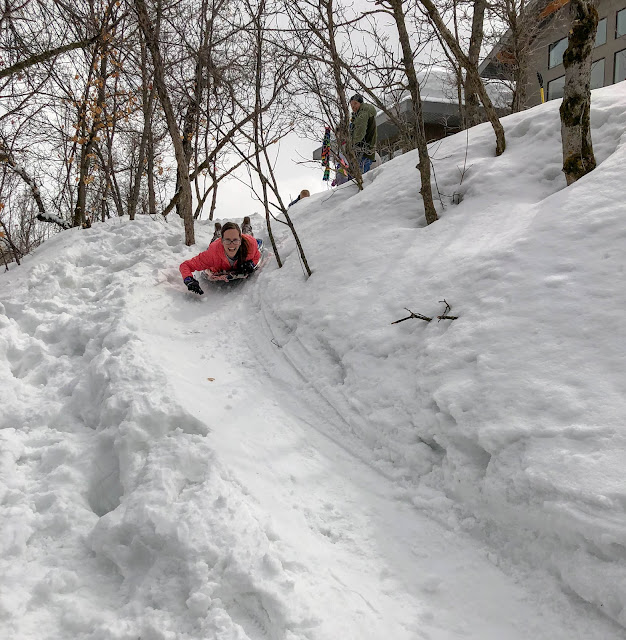 Somehow we missed getting a picture of Miriam going down, but I did take this video of Andrew and Zoë going down. It was a bit of a wild ride at the end:

I wish I had filmed the ride they'd taken before this one, but Andrew had his phone in his pocket during that ride so I couldn't (because I'd left both my phone and the camera in the house). Those two crashed at the bottom and then both lay on their backs, laughing their heads off (not crying/almost crying as they were after this crash) and it was so adorable!

Alexander didn't go down the hill even once. Instead we sent him down the more gentle slope on the other side of this hill (due to this ride getting a little wild at the end), but mostly he just wanted to eat the snow.

He, Benjamin, and Miriam trudged back to the house early with Grandpa and Karolla to get a fire on and start some hot chocolate for everybody. Alexander because he was bored of sitting in the snow, Miriam because she got too much snow in her boots to continue having a good time (and, she says, because she scratched her eye on a twig), and Benjamin because he had a rather spectacular wipeout and although we got him back up on the metaphorical horse a couple more times he was mostly just done for the afternoon.

At the bottom of the run he flew over the hill (that mostly everyone managed to stop at) and clotheslined into a tree branch, giving himself a nice scrape on his chin. When he landed he plunged right into the snow, but his poor little neck was still stuck on that tree branch, and he couldn't quite get himself down.

Luckily, I was at the bottom of the hill, so I ran after him.

It would have been a good time for snowshoes, that's for sure!

Eventually I made it to him and yanked him out of the snowbank—the branch he'd been caught in thwanged back into position—and tossed him onto the correct side of the hill. He slowly and sadly made his way back up to the top, where he sat and pouted, and then very reluctantly went back down (this time with me spotting at the end so that I could pull him off his sled if he went too far; everyone else had enough sense to bail off their sled before flying over the hill into the trees).

Rachel, Zoë, Andrew and I stayed out a bit longer, but soon it started snowing rather steadily and we decided it was time for us to warm up as well.

Here's Rachel after crashing once: 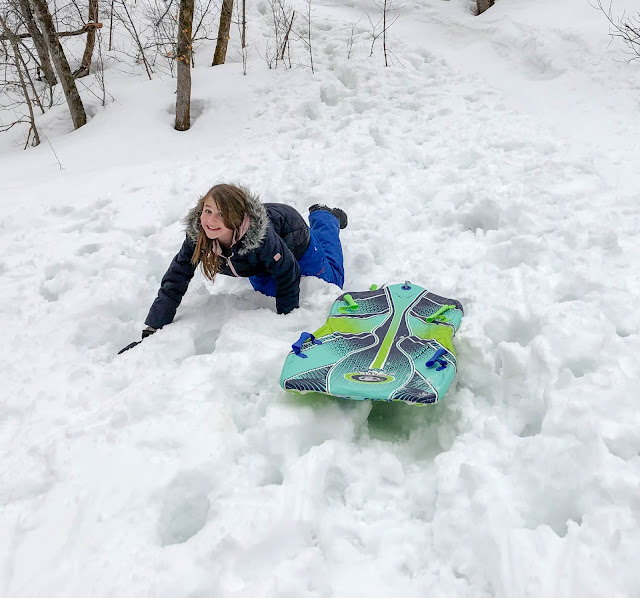 And here she is crashing again (and in answer to her question/accusation, yes, I was filming):

Here we are trying to show how deep the snow is, though we sunk even deeper than that at times: 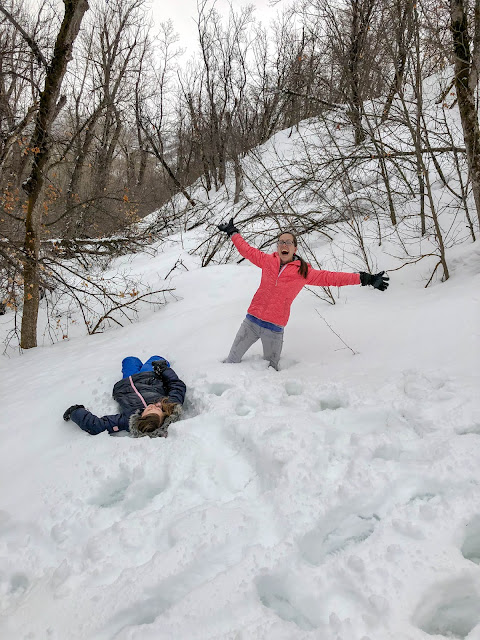 And here's Rachel sliding down the snow pile on the neighbour's driveway: 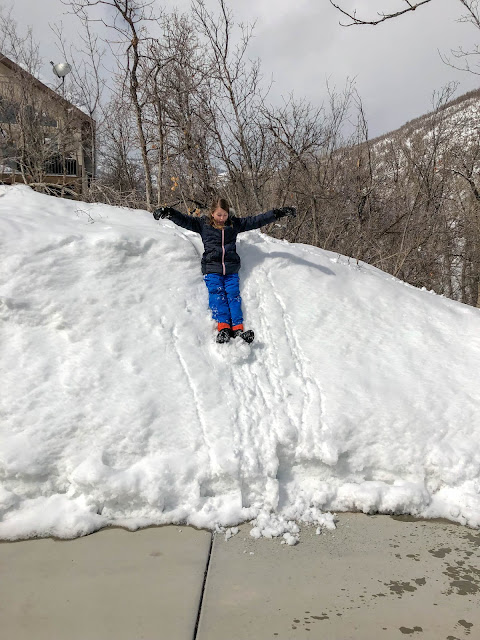 It was nice to get inside and warm up, while sitting around the wood-burning stove and enjoying the view out the window. It is pretty up the canyon and it was enjoyable, but I don't know that I could ever live in a place with so much snow on such a consistent basis (I've done my time in the snow, thank you very much). So it's a good thing I get to move to Georgia!

Georgia, where they have 13 foot gators (for real).

I guess there's downsides to anywhere...
Posted by Nancy at 5:29 PM