Yesterday I took Alexander to Relief Society with me. I haven't taken him to class by myself for several weeks now and it made me feel very glad that he will soon be in nursery because he was quite the handful.

Are you ready for me to blow your mind? Because I just checked the calendar to see how many weeks of church we have to endure with him and the answer is one.

He has one week before he goes into nursery (the last Sunday in March). The week after that is General Conference weekend and then, magically, it's April 14 and he'll be 18 months old (which is old enough for nursery, though imagining that he'll just waltz in there is laughable (he's not going to like it, not one little bit))! That baby is such a momma's boy! 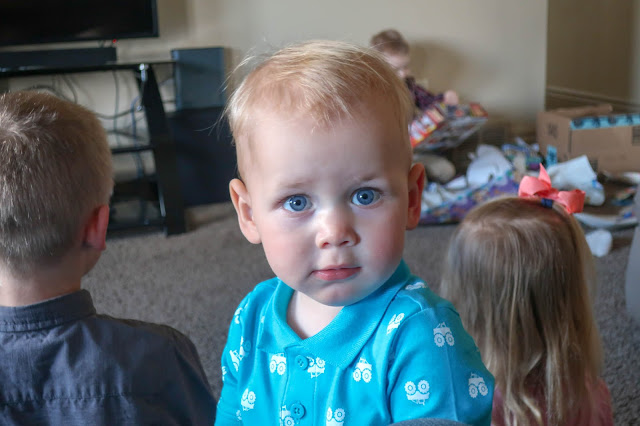 Anyway, he was being a little troublesome during Relief Society. He was bound and determined to climb up the chairs stacked against the walls—because they look like little ladders from his perspective (and ladders are fun; he loves climbing things). I was equally determined to keep him from doing so because, well, he's done it before and let's just say he should have learned from his experience (because he got a teensy bit smashed when he pulled a stack of chairs on top of himself) but he didn't, which is why he has his mother around to constantly remind him about his previous mishaps.

The ladies around me were trying to distract him (mostly with packets of fruit snacks or lollipops but he honestly doesn't know what those things are so he wasn't interested) but mostly I think they were mostly distracted by him.

At one point he stood with his back against the stack of chairs and smiled coyly at me and then began attempting to climb the chair backwards. This unleashed a series of amused whispers in the rows behind us.

"Oh—haha! He thinks if he goes backwards she won't notice!"

"He's a rather determined little thing!"

"Look how tricky he is!"

Nursery will probably be the best place for him (once we can get him acclimated) because then we'll all be able to pay attention to the lesson (but who am I kidding? It will probably mean we'll be called into nursery because our kids have traditionally been a little...extra...when it comes to separation anxiety around this age and Alexander's not going to be any different (oh, well, I've been called in there before for the same reason, different child(ren))).
Posted by Nancy at 1:45 AM