The kids have been planning a Harry Potter marathon for weeks now, waiting for school to be over so they can claim a little more control over their schedule. Rachel took her final final this morning (it took her about ten minutes and she got 100%, which has been the story of her life lately...and which is neat...but also...she's excited to be homeschooled next year so she can be challenged a bit (I'm so glad I fought to get her placed in the gifted program here because I honestly don't know what she would have done with herself if she hadn't been placed; she's been rather bored all year)) and then started working on some sorting-hat cupcakes (or cauldron cakes).

She mixed up a chocolate cake from scratch, filled them with four different colours of icing (red for Gryffindor, green for Slytherin, yellow for Hufflepuff, and blue for Ravenclaw), and then she made a chocolate cream cheese frosting for the top. 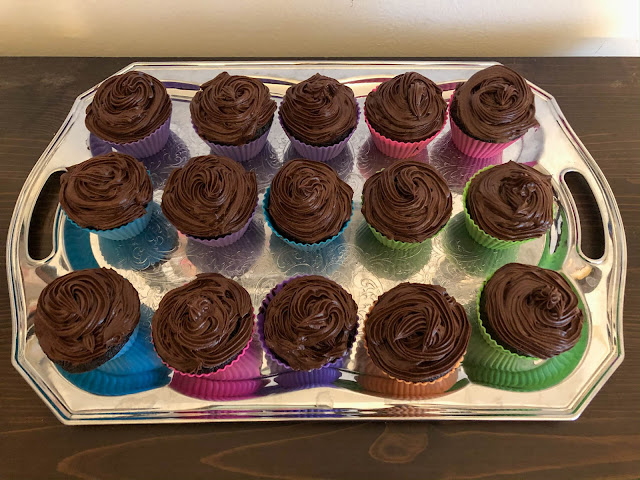 She also made some treacle tart, which ended up being somewhat of a disappointment. Treacle tart is a pie filled with breadcrumbs mixed with a "treacle" syrup and lemon juice. So basically a bread pie. It was...fine. It definitely had that across-the-pond feel to it. 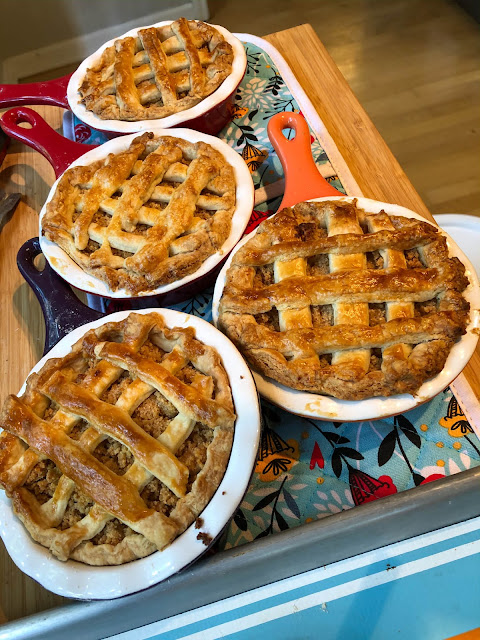 As Andrew said, that's just how European desserts are—a little dry and not very sweet. It doesn't mean they're bad. Just different. American desserts, meanwhile are like, "Let's bake a chocolate cake in a cup, fill it with frosting, and then put even more frosting on top!" Which, honestly...that's exactly what Rachel did, so...

The last dessert were some pumpkin pasties, which I quite liked. They also weren't very sweet and we didn't expect the filling to set up as well as it did, but it was quite delicious and set up just fine. 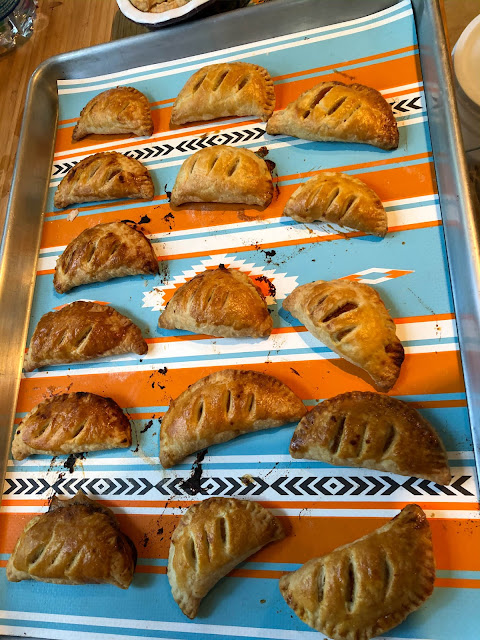 Miriam also made up some "Molly's meatballs," mashed potatoes, and peas for dinner.

While they were so busy working they sent Zoë and Alexander upstairs (and out of the way) to build Hogwarts together. Zoë came up with a surprisingly delightful little diorama complete with multiple turrets, a whomping willow, and various little people that she'd assigned to play the role of certain characters in the story. 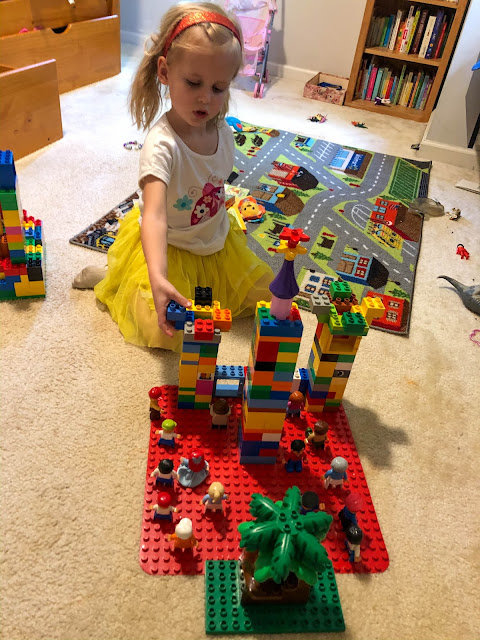 Here's the view from the front with Hedwig sitting on the main gate: 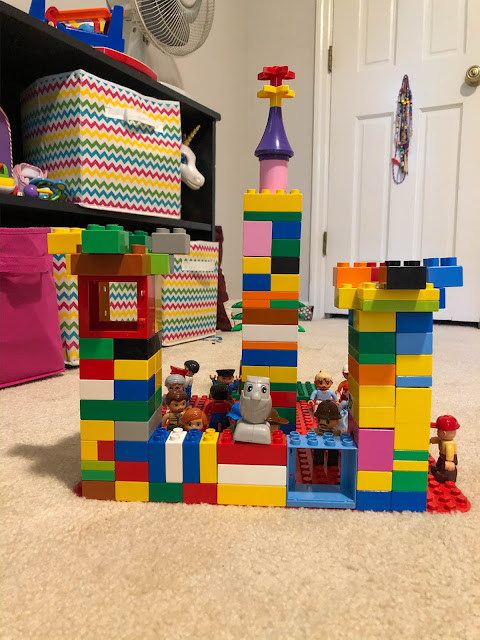 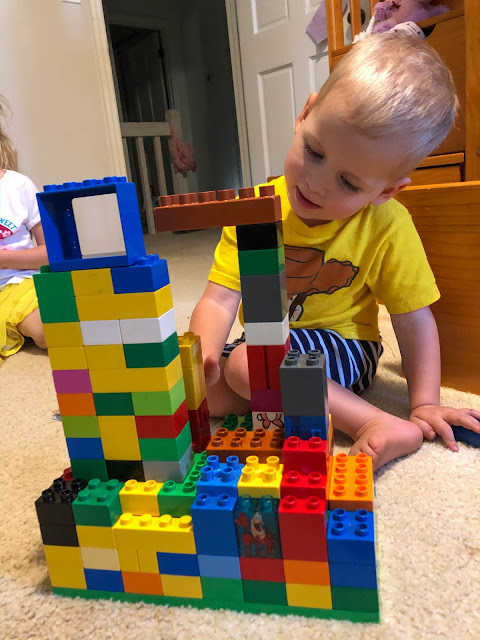 We had a little bit of drama over eating our dinner since the girls had made butterbeer to go along with it. Ordinarily we only drink water at the table, so having something different was so terribly exciting that Alexander and Zoë could hardly eat their dinner. Zoë often hardly eats her dinner and she usually gets away with it but today we decided to be firm and told her that she couldn't have any dessert unless she finished her peas.

First of all, she likes peas so this is not a terrible thing. And we said nothing about her mashed potatoes. Second of all, she knew about this going into dinner and has been excited about cupcakes all day.

In the end she caused a bit of a diversion by asking to go to the bathroom while everyone was getting ready to go for a walk and then (because we'd stopped washing her) zipped over to the garbage can and dumped her dinner inside.

"No cupcake then," Andrew told her.

She cried and howled and put on a big show of being so terribly upset, but she knew what her choice was when she picked it up.

"I just didn't want to eat my dinner," she said. "But I still want a cupcake."

"I did mean to not eat my dinner," she said. "That's a choice I meant to make. But I didn't want to choose to not get a cupcake!"

One of life's perplexities, for sure. I told her that perhaps we could work out a plan of redemption for her. It would involve an apology for her deceitfulness and a repentant dish of cold, leftover peas, but surely her mistake could be fixed. So when we got home Zoë tucked into a cold bowl of peas (four teaspoons' worth, not a huge amount) while her siblings selected their cupcakes.

I don't have a picture of Rachel with her cupcake (Andrew has that on his phone), but she was happy to be placed in Hufflepuff. Miriam got Slytherin... 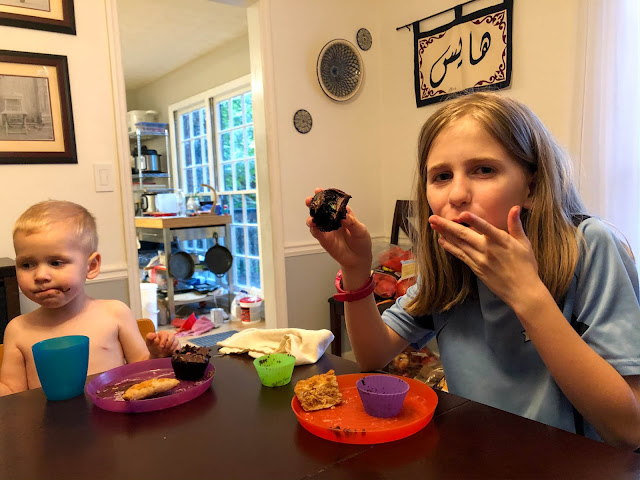 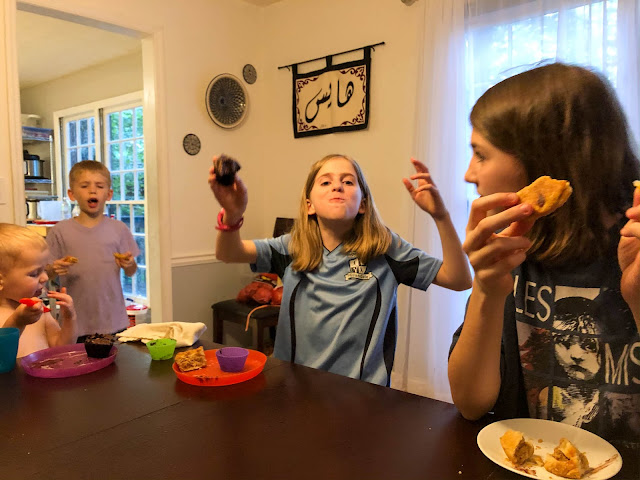 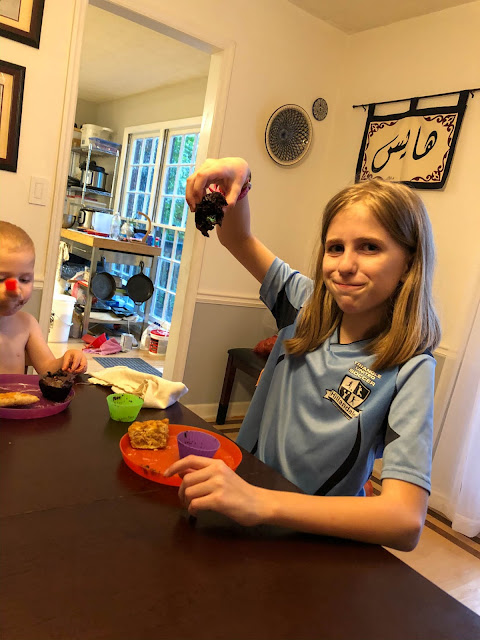 Benjamin got Gryffindor and I believe Alexander did as well, which made Zoë feel rather anxious because she had wanted to get Gryffindor as well and there were only three of them to be had: 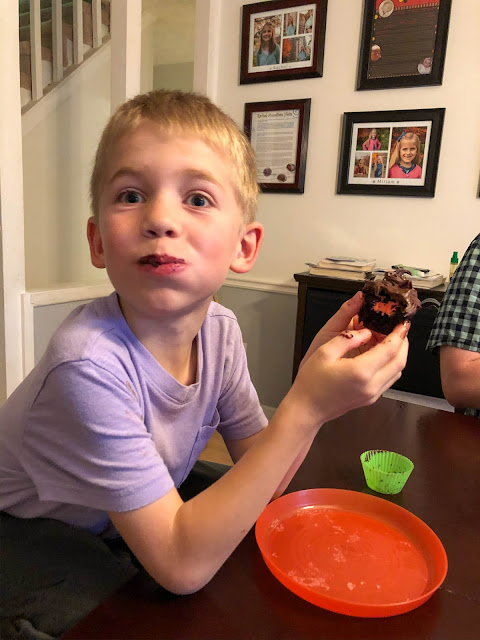 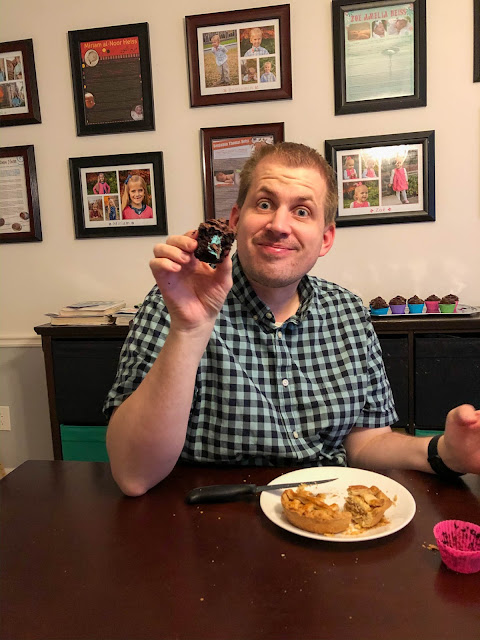 Zoë, finally having finished with her peas, selected a cupcake with a pink wrapper (pink wrappers are important) and was only a little disappointed to be sorted into Ravenclaw like her dad. The cupcake was so yummy, though, that she couldn't spend too much energy getting worked up about it. We loved that she ate her cupcake top-down rather than across. 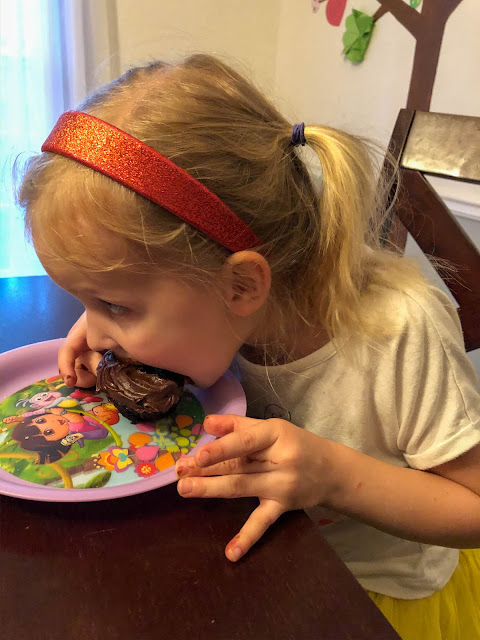 She made quite a mess of herself! 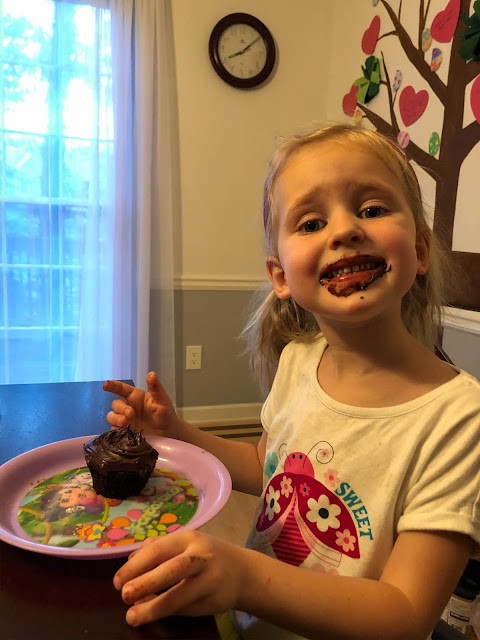 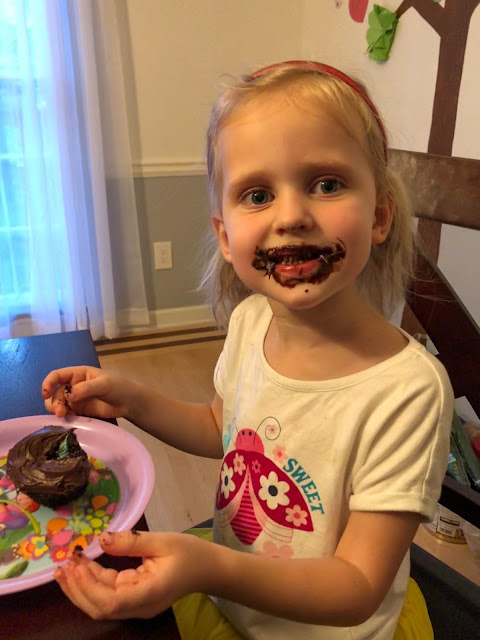 She just kept getting messier and messier: 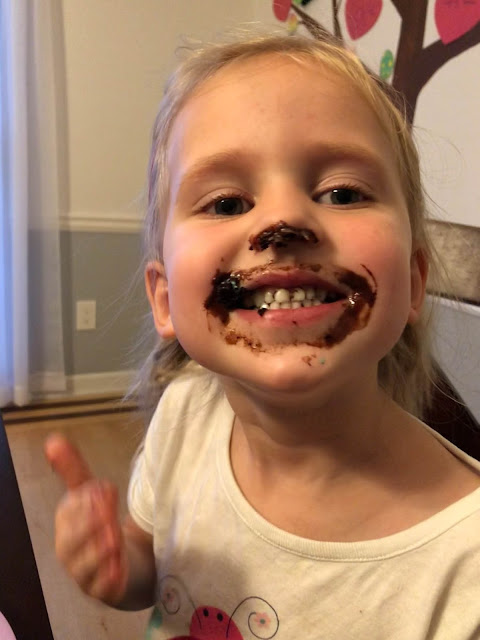 I texted Emily to wish her a happy birthday and to tell her that we had cupcakes without her. She surprised me by sending back a picture of herself with cake all over her face.

It even looks like Emily has been sorted into Ravenclaw as well, doesn't it?

I don't need to be sorted into a house because I'm headmaster and need to remain impartial, so I mostly filled up on pumpkin pasties...and a little bit of treacle tart...but not much.

"I didn't like the treacle tart as much as I thought I would," Rachel said.

"Huh," I said. "I liked it about as well as I thought I would after seeing the ingredients."

"Well, that just shows—keep your expectations low and they'll be met!" Rachel chirped.

Side note: Rachel and Miriam cannot remember how to pronounce treacle. They keep throwing any old vowel in there. Rachel called it "tri-cle," which we teased her about because there's not even an i in the word!
Posted by Nancy at 12:22 AM