After getting home from the pool I threw my hair into a bun and ignored it while we finished up our schoolwork, so it was still wet when I was putting the kids to bed this evening. While I was reading to Zoë and Benjamin (who sit in the hall with me to listen, while poor Alexander has to be confined to his bed, unless there's a thunderstorm and then he gets to snuggle with Mommy a little longer (we read picture books before this, so it's not like he's going without snuggle/story time; he just wishes he could have more and I just wish he would fall asleep already so we reach a nightly impasse)).

Here's Alexander snuggling to sleep on a stormy night not too long ago (I think this was Sunday): 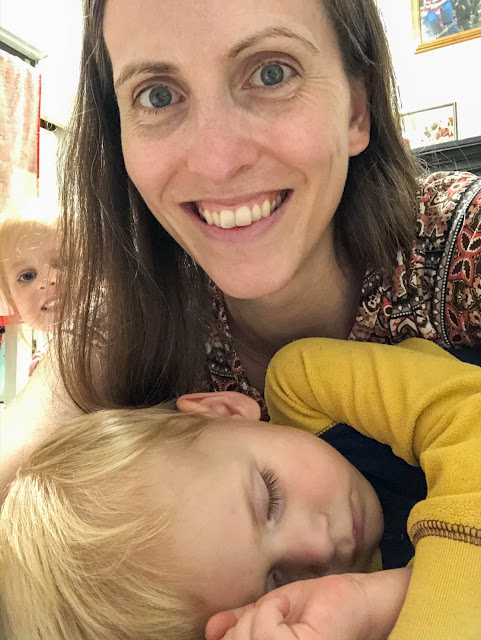 The big kids (who in this case are Zoë and Benjamin) used to listen to me read aloud from their beds as well. But then summer hit and our air conditioner broke and we broke out all the fans and it was much too noisy for them to hear me from their beds, so they gravitated into the hallway with me. And Zoë started drawing while she listened, and Benjamin began trying his hand as a hairdresser, while Alexander fell asleep to the sound of my voice. He probably only heard a very Charlie Brown version of the story—"Waa waa waa wa wa wa waa!"—but it was comforting enough for him to agree to stay in his bed...unless there's thunder.
Now that our air conditioner is fixed...the kids have stayed in the hall with me, drawing and brushing my hair. And I mostly think it's alright...so long as they put up absolutely no fuss about going to bed after (because this part of story time used to be the last call for the night, but since they've moved into the hall they sometimes forget to do things like go potty or fill their water bottle first, you know? Because it feels a little less last-call-y because they aren't tucked into their beds).
Anyway, here's what Benjamin originally did with my still-damp hair this evening (ignore our hallway mess): 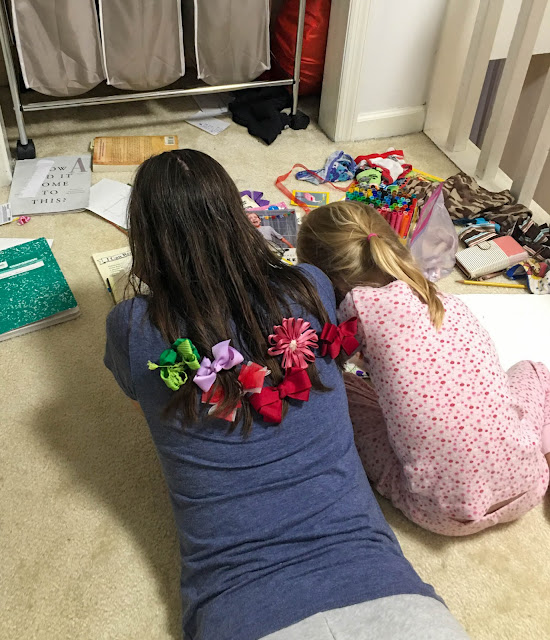 And then he figured out that having the bow at the end of a section of hair made it much more manageable than when all the strands were loose, so he tried his hand at braiding and didn't do too bad of a job! I thought it was pretty neat for him to just figure that out all on his own (I did show him once how to do it—how you always cross over the middle section of hair, but that when you cross the hair you just moved becomes the new middle section—when he said he wanted to try and then he just went to town). He probably braided my hair a dozen times before I finished the chapter! 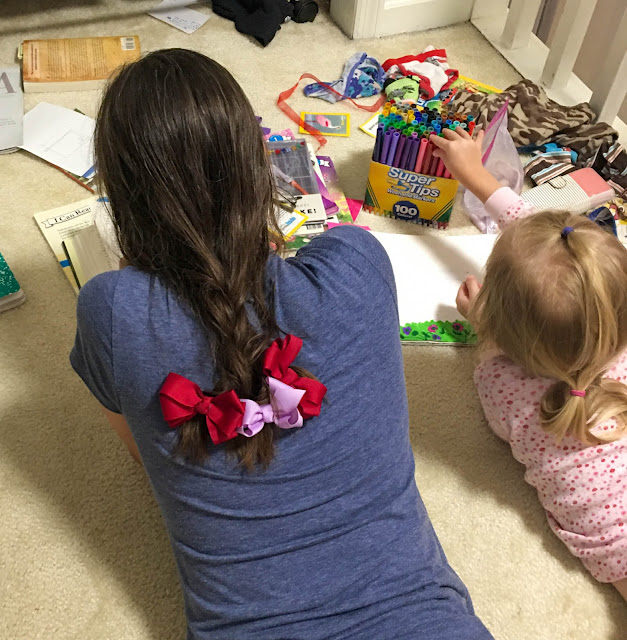 Speaking of Benjamin, I do have a little letter he wrote to me today that I want to record. Firs of all, ironically enough, this morning we read one of the tales from Mangoes, Mischief, and Tales of Friendship: Stories from India, by Chitra Soundar, called, Who Stole the Laddus? which is based on the a "Birbal and Akbar" tale known as The Length of the Stick, which is about lying. So we'd already talked about lying today and how you shouldn't do it and how you'll eventually get caught...

And then in the afternoon Benjamin brought me his math assignment back mere minutes after he was assigned it and all the answers were correct but he had shown no work.

"Did you really do the assignment?" I asked. "Or did you just look for the answers in the back of the book?"

"Some of these questions are pretty challenging," I said. "And you showed no work."

"You did?" I asked. "That's great! Then you won't mind doing it for me again! Lizzie has 24 jellybeans and Winnie has 5 times the amount of jellybeans as Lizzie. How many jellybeans do the girls have together?"

Here he faltered. He could not figure it out.

"I see I'm putting you on the spot," I said. "That's okay. We'll try another one. This next question you wrote down the correct answer but I want to know how you arrived at it. So let's see. If we work our way through this problem we find that we need to calculate 12 x 5 x 1 x 8 x 5. So what's that?"

"It was easier when I was just doing it in my head than when I'm doing it out loud right now," he said.

"Could that be because you didn't do them in your head at all?"

He hung his head.

"Because I wanted to get to science faster!"

"A noble motivation, but you need math for science! And, like the king in the story we read this morning, I'm more upset that you would stand here and continue to lie to me about it!"

I actually said many more things than that (stop shortchanging yourself, I can't be on your case 24/7, you need to start taking some responsibility, blah, blah, blah). And I tore the answer key out of the back of his book (it now resides on my desk; pray we don't lose it). And I erased his answers and told him to do his assignment over, this time showing his thinking on the paper, even if he was doing the calculations in his head (just to practice showing other people how his brain is working things out, not because it's bad to do calculations in your head). He also had to write me an essay about honesty.

He wrote the essay in letter format, which he thought was a nice touch:

Lying is not good because you will get consequences like not being trusted or, if you are older, being fired from your job and not being trusted. Mom, I am sorry that I lied to you. Forever after this day I solemnly promise to never lie to you again and when I do I will learn from it and never do it again.

I love that he is 100% honest about the fact that he's probably going to mess up again. And, you know what? I'm fine with that. We're here to get messy and work through those messes, right? That's what life's about. And hopefully (finger crossed so tightly) by the time his messes matter, by the time he needs to be working through his messes on his own, he'll know how to clean things up a little bit (or at least not get things quite so messy in the first place).