Snippets from this week

Where to even begin?

Hurricane Sally blew past us this week, dropping our temperatures into what really felt like fall (though I do believe it will warm up again for a while before fall is truly here). At least her trajectory kept the smoke from the west coast fires at bay (we had friends in Maryland and Ontario showing pictures of the haze; we had lovely air quality, however, due to the hurricane). The rain was different from a regular southern downpour; the wind was really lashing rather than simply falling.

A few big branches dropped here and there. And Sally discovered—and took advantage—of a weak join in our roof, so now we get to discover the ins and outs of getting one's roof (and drywall) repaired (which we're just thrilled about).

Rachel made a birthday cake for Andrew's birthday, with some help from Alexander. He loves helping Rachel bake.

When the cake came out of the oven he asked if he could try some and Rachel told him that he would have to "wait until Daddy's birthday," a phrase he really internalized.

"I can't wait 'til Daddy's birthday," he came to tell me.

How sweet, I thought, then said, "Well, you're just going to have to. It's only two days away."

"Two days is a long time," he gulped.

"Daddy's birthday will be here soon enough," I assured him.

Later Andrew and I were talking in the living room (probably about the roof; one of Andrew's students had a tree fall on their roof so they were having a much worse day than we were having) and Alexander tiptoed in and smiled coyly at us, dancing a shiny-wrapped granola bar in the air.

"Please can I have a snack?" he said.

"Not right now," Andrew said. It was about time to start dinner.

Alexander gave a brave smile, but his eyes started welling up with tears.

"Please, please can I just have a little snack?" he asked again.

"Daddy said no, little buddy," I told him.

"Okay," he said with a mostly-brave face. Only his quavering voice and teary eyes betrayed an underlying Big Feeling.

"What's wrong?" I asked, opening my arms and letting him rush inside my embrace.

"I just can't wait until Daddy's birthday!" he wailed. "Two days is too, too long!"

"Rachel said we can't eat until Daddy's birthday!" he cried.

Poor thing! He was pretty sure we were planning on starving everyone until Daddy's birthday.

As evidence of our good faith (we do believe in feeding our children), I compromised with him and set out some leftover green beans for him to munch on before dinner (instead having that granola bar he was so desperate for (he would survive on granola bars if we'd let him (but he also loves vegetables; mixed vegetables and California mix are his favourite))).

We refinanced our house! We signed all the documents today. A lawyer came to our house to do it and, honestly, I have never seen the kids pitch in to clean the house so well before! They were such great helpers! Our house was spick and span and lawyer-ready! 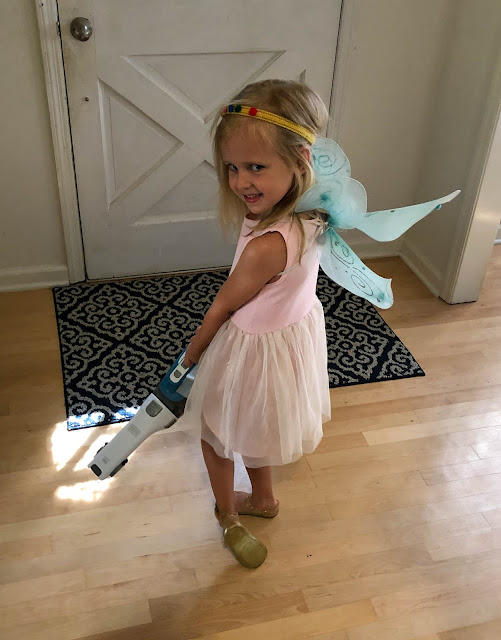 We are excited to be spending a little bit less on our mortgage each month...so that we can spend a little bit more on all the emergency house repairs. Boo! Hiss!

And unfortunately we can no longer say things like, "What were the previous owners thinking!?" because technically we are now the "previous owners."

We went for a spooky Halloween-themed walk this evening. It was already getting a little dark when we left; the clouds were thick and ominous. An owl swooped in front of us (which Alexander was particularly thrilled about, and which Miriam was particularly freaked out about) and bats were flitting all around.

Benjamin had taken "the loop" in one direction while the rest of us had taken "the loop" in the other direction. We do this sometimes now—split up into groups and have half (or some sort of percentage) go one way and half go the other, give high fives in the middle, and then finish walking home our separate ways. We used to do family walks as "family together time" but now that we're always together we do walks for a bit of "family apart-er time."

Today Benjamin was taking one way solo and the rest of the kids were with us. He met us as well-over his halfway mark, running so hard he was out of breath, tears streaming down his face, blood running down his arm and leg. It was a monstrous sight. He'd tripped somewhere along the way (he isn't even sure where he fell) and ran his hardest to find his mommy. I helped him limp home, step by agonizing step. It was amazing that he'd been able to run so fast to find me, I remarked, when he was hardly able to limp now that he'd caught up to us.

The poor guy had blood from his knee down to his ankle.

I suggested to him that such a gruesome sight would make an awesome Halloween costume.

"What do you mean?" he said. "No one would believe this costume! There's only blood on one side of my body. That doesn't make a very believable injury."

We made it home, and as I was washing blood from his skin (it had dripped all the way to his ankle) and cleaned the dirt out of his wounds so I could bandage him up, Rachel announced that Ruth Bader Ginsburg had died (which was perhaps the most nightmarish thing of all). The news broke while we were out on our walk.

Now the girls are watching The Woman in Black with Andrew (which, for the record, I think is crazy; that movie is terrifying). Benjamin was annoyed that he wasn't allowed to watch as well, so even after he got to watch an episode of Clone Wars and even after reading picture books with me and even after I read him a chapter of The Birchbark House, he came out to me to say in an injured tone, "Mom, how different really is Women in Black from Men in Black? Because I've if I've seen Men in Black I think I can handle Women in Black."

"It is very different," I told him. "One is a modern-day, science-fiction action-comedy. The other is set in the olden days, involves scary ghosts, and has absolutely no comic relief. It's a scary, scary movie. It starts scary and sad. It ends scary and sad. And it's scary and sad the entire way through."

(Side story: while I was writing this, Miriam came up for her lullaby (sometimes my kids come to me for lullabies instead of waiting for me to come to them) and we were talking about the movie. Well, my curtains were a little bit open so the glass with the black sky was acting as a sort of a mirror. Benjamin wandered faux-sleepily (hoping he could trick me into thinking he'd just woken up and was legitimately groggy when he was probably simply stewing about being sent to bed before his sisters) into my room to ask why Miriam had screamed (during the movie). Out of the corner of her eye Miriam saw a personage appear in the window (Benjamin's reflection) and she yelped and melted onto the floor, laughing at her own terror as Benjamin shuffled through the doorway.

This morning Rachel was listing all the amazing words she had used in her morning writing response.

"...and humanization and verbatim and..." she said, only she said VERB-a-TIM rather than ver-BAY-dim.

It was charming. And, honestly, it's good to get these things out—those words you've only seen in print and really have no idea how to say—sooner rather than later. But still we had a good laugh about it.

At dinner though, she really took the cake. But not Andrew's birthday cake, of course. That particular cake will have to wait. This cake was merely metaphorical. She took the metaphorical cake.

We were discussing hurricane season (probably because we were all staring at the water spot on the ceiling of our dining room) and Rachel asked what hurricane we were on now.

"Yes way!" I said (my friend Susanne posted several articles about this today so I was in the know (thanks for keeping me informed, Susanne)).

"Ummmmmm...so homeschooling is going very well," I said sweetly to Andrew. Then I said to Miriam, "Sweetie, where is the Gulf of Mexico?"

"Oh, yeah!" Miriam said. "That. But Texas still touches land on one side so it's still landlocked."

Everybody stopped eating and stared at her. She stared back.

"What?" she finally asked.

"So," I said again, sweetly, to Andrew. "Homeschool is going very well! But in my defense I only just started homeschooling this one so I'm sure this one is entirely my fault." Then I addressed Rachel: "Okay, sweetie, Alaska's definitely not an island."

"It's...not," I informed her. "It's attached to the Yukon Territory, borders Canada. Does any of that sound familiar?"

"It is though," I told her. "Alaska is way up north, across the the Bering Strait from Russia, so it is surrounded by water...on three sides. But its fourth side is attached to Canada. That's why you can drive from the continental United States through Canada to get to Alaska. It's, like, right there, touching Canada."

We had to go look at the map.

Honestly, I can see where she's coming from. She's probably spent her whole life looking at very US-centric maps—with the little inset maps of Hawaii (which we honestly should have just left alone) and Alaska (which honestly Canada should have just purchased from Russia) taken completely out of context. Our map(s) were selected very carefully by a political scientist, so the projection is more international, rather than US-centric (you can ask Andrew more about them). Our Canada map shows Alaska glued on right where it should be (next to the Yukon) and the US map has Alaska inset, but instead of having the outline of Alaska floating in a sea of blue, it has Alaska plus a little bit of the Yukon and BC (which clearly look like land).

So that was a fun little misconception to clear up. And I'm not sure it will ever not be funny....

When Hurricane Sally was kind of winding down—all her fury had gone away and she was nothing but a drizzle—Zoë and Alexander asked to go outside to play in the rain. They put on some jackets and found water-friendly shoes—rain boots for Zoë and crocs for Alexander—and went outside to splash in the puddles.

Alexander decided to take his crocs off and run around barefoot for whatever reason.

Soon we heard him screaming bloody murder, banging on the door.

I ran to open the door and he fell inside the house, sobbing and writhing.

"What's wrong I asked?" he continued to cry.

Zoë skipped up to the door.

"Oh, he took off his shoes and was stomping in puddles with bare feet."

"And what happened?" I asked. "Did he hurt himself?"

"IT WAS DEAD!" Alexander bellowed—the first intelligible words we'd gotten out of him. "IT WAS ON ME! AND IT WAS DEEEEEEEEEEEAAAAAAAAAAAD!"

The kids have all been randomly quoting that line this week. Everything will be totally normal and then one of them will hurl themselves onto the floor dramatically and exclaim, "IT WAS DEAD!"