We've gone to the pool every day since August 20 (aside from weekends), so that's nine days (and approximately 20 hours of swimming, which means we've spent $25 per hour for this source of entertainment/enjoyment/education this summer so far (I'm hoping that rate will go down considerably before pool season is over))). In that time, Zoë has gone from needing her floaty to shunning her floaty and her swimming skills have progressed a lot!

She's always been somewhat fearless at the pool, probably because she spent every day of the summer for the first few years of her life at the pool. Our Spanish Fork years were a bit of a dry spell for swimming (though we did hit the rec center a lot) and then this summer was an absolute drought. In the morning she gets out of her pyjamas and straight into her swimsuit, that's how excited she is to go to the pool every day. Here she is diving into the pool, flipping onto her back, and then swimming the length of the pool (well, just the diving tank) using the elementary backstroke I taught to her yesterday.

Her stroke's not perfect yet but I'm impressed with how well she's doing!
Later, when I said I announced that I was tired of treading water with Alexander clinging to my back, we moved out of the diving tank (you can hear from the video that a couple of other people came to use the diving board, which is fine, but we wanted to give them their space), she and Benjamin started having fun jumping into the pool. It says "no diving" and Zoë wasn't about to break the rules!
"What should we do?" she asked Benjamin.
"CANNON BALL!" Benjamin hollered, flinging himself into the pool and creating a huge splash.
"CANNON BALL!" Zoë mimicked, pulling her body into a tight little line and gracefully plopping into the water, creating hardly any splash at all.
"How did you like my cannon ball?" she asked when she surfaced (it's only four feet in the main area of the pool and she can hold her own there, so I was watching from the deck with Alexander instead of shadowing her, as I was in the ten foot section).
"It wasn't much of a cannon ball," Benjamin scoffed.
"It was more of a pencil jump," I agreed.
"A pencil jump?" Zoë said. "Is that a real thing?"
I nodded.
"It is!" she squealed. "And no one taught me how to do it? I just figured it out all on my own? I am so amazing! Benjamin, let's jump again!"
"CANNON BALL!" Benjamin hollered again, hurling his body off the deck, creating another tidal wave.
"PENCIL JUMP!" Zoë screamed, once again springing into the pool as stiff as a pin.
They continued like that for several minutes. I didn't have the heart to tell her that people don't usually announce pencil jumps with such gusto. She'll figure that out later.
Then their attention turned to the diving blocks. Having diving blocks seemed rather hypocritical to Zoë since the area is marked as a "NO DIVING" zone. I did my best to explain to her the difference between recreational diving, competitive diving, and a racing dive. The first two typically involve quite a bit of downward momentum, whereas with a racing dive, it's a long, shallow forward-moving dive, "So it's okay to dive from the diving blocks during a race because the swimmers aren't going to dive down; they're going to dive out."
She climbed up on a block, got into her diving stance and said, "Okay. Benny, I race you to the other end of the pool," she declared, and dove on in before I could even stop her. So Benjamin hurled himself into the pool from another starting block—"CANNON BALL!"—and started racing after her.
Zoë furiously swam, facedown in the water, kicking her legs, scooping her arms, until she could hold her breath no longer. Then she lifted up her head to breathe and quickly started panicking. We haven't mastered breathing techniques yet. "Mommy! Mommy!" she spluttered.
"Quick, quick!" I said. "Turn onto your back. Rest for a second, catch your breath, and then keep swimming. Do elementary backstroke if you want, just keep going! Benjamin's going to win!"
By this point he had mostly caught up with her. Racing with him is a bit like racing the fabled hare. He's fast...but he's got no focus. He swam quickly for a few strokes and then let himself sink to the bottom of the pool and pretended some stuff and then when he realized Zoë was swimming again he took off again...and then stopped to play with the lane line...and then started swimming again.
He did end up beating her, but just barely.
She didn't even care because she swam and entire length of the pool—25 metres!
Miriam's pleased that she's starting to get the rhythm of breast stroke (my personal favourite). All in all the kids are making huge strides in their swimming skills, so this summer wasn't an entire waste!
Here they are spreading out in the sun to enjoy a little snack before hopping in to enjoy more swimmig: 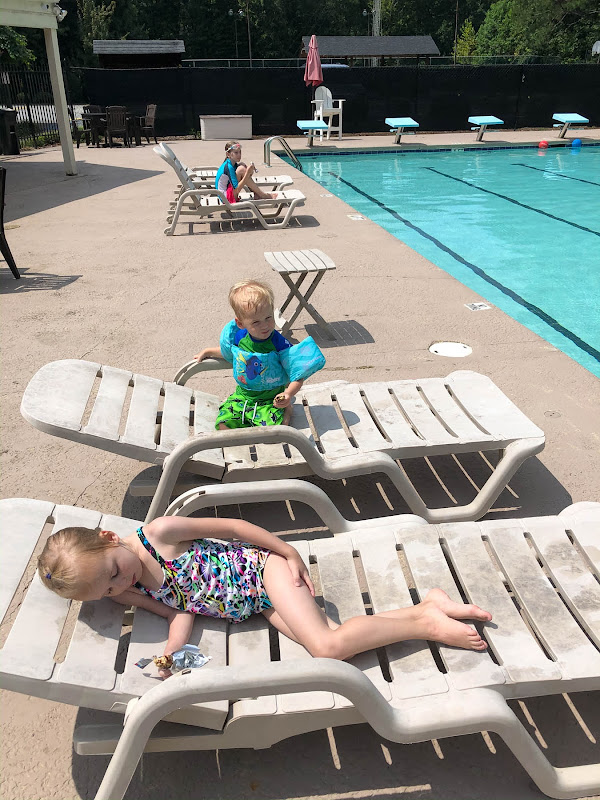 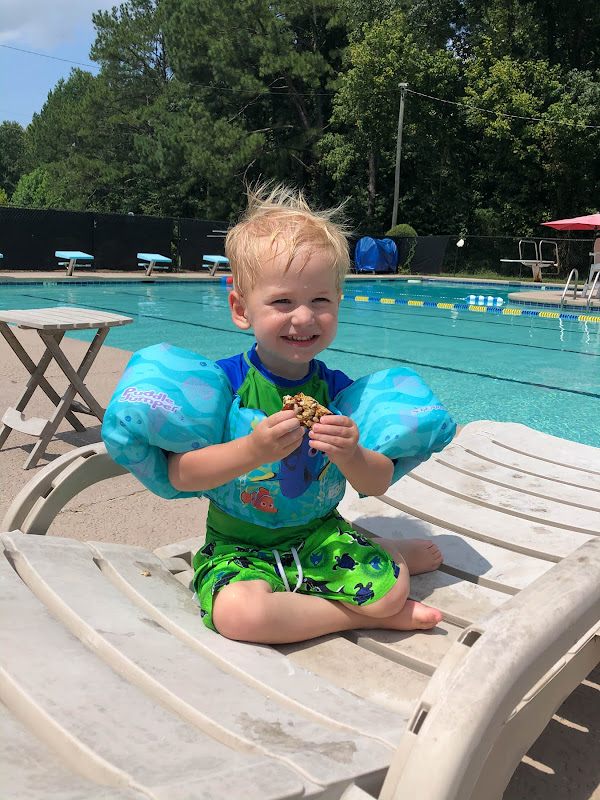 And, of course, no pool visit would be complete without some sort of wildlife spotting. Today Alexander found a cicada wing: 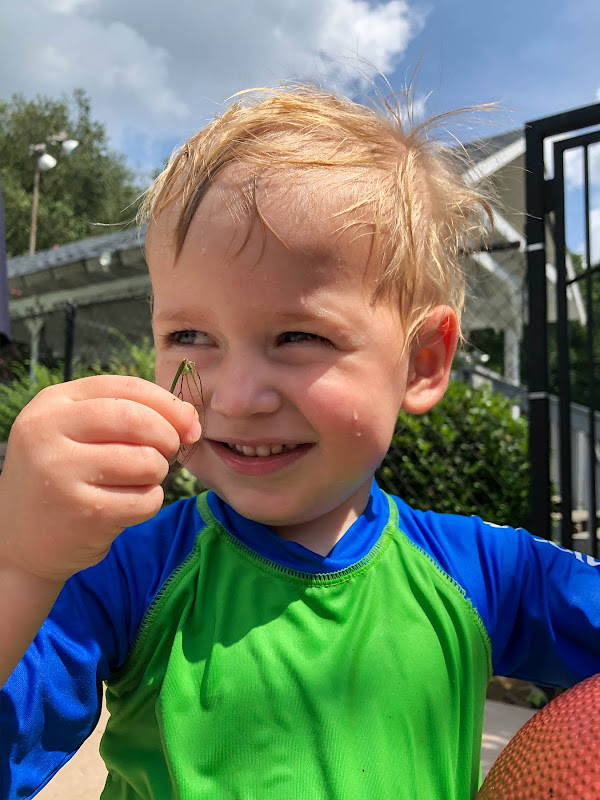 And we got to make some rather close observations of this butterfly enjoying a little puddle of water: 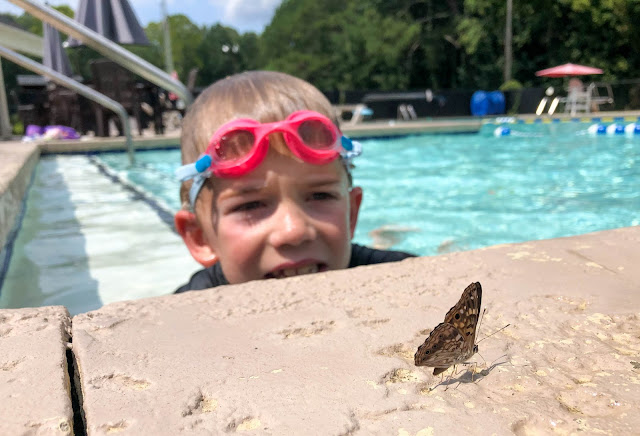