Now that I've got all that negative stuff off my chest, you should know that I don't really consider myself a negative person. Sure, I'm really good at coming up with worst-case scenarios but I also am really good at finding the positive in even the most pathetic of situations (at least, I think so). So here are a few cute things my little ones have said recently (really just a few though because I need to get to bed).

I took the kids for a walk the other night (Wednesday—when the emergency electricians were over making it so our house didn't spontaneously combust) and we found so many hints of fall. We're still enjoying our daily swim, of course, but the leaves are starting to turn and Zoë found an acorn and an owl feather.

She's very much into a new series we found (at the friendly neighbourhood "little free library" near the pool) called Owl Diaries (and, of course, Alexander loves owls as well, so he's been enjoying listening to Zoë read about this little owl world) so was very excited to have found an owl feather. 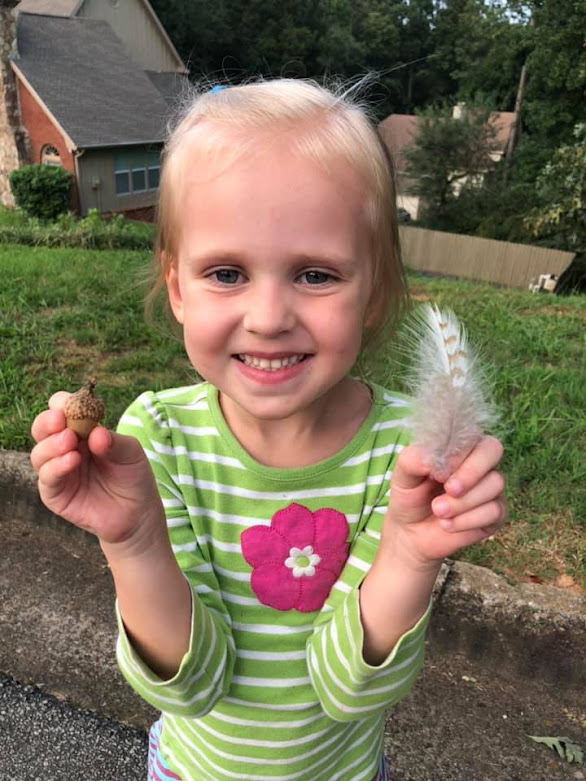 I usually don't let my kids collect feathers (because I am very good at coming up with worst-case scenarios: avian flu, mites, bacteria!) but I told her that she could keep it...if we sterilized it.

We walked into the house and she rushed up to Andrew to show him her feather. "Look, Daddy!" she gushed. "Look, look, look! I found an owl feather! And Mom said I can keep it! We just have to stabilize it!"

That's cute enough on its own, but then Andrew figured the fluffiness of the feather meant that it was somehow "unstable" and that putting it into the oven would some how manage to "stabilize" it and make all the fluffy parts stiff again.

Incidentally, this is also how we discovered that our oven wasn't working (so the feather got popped into the freezer instead of being roasted in the oven). Andrew was like, "How will the freezer stabilize it?"

And I was like, "Oh, honey. We're sterilizing it."

So that was a pretty great moment.

And then today when we were at the pool the older three kids had been playing piggy-in-the-middle (which they call monkey-in-the-middle, but...that's just plain wrong) and started bickering so I told them to jump off the diving board and I'd judge their jumps. They thought this was a very good idea and they played at it for a very long time while Alexander, Zoë, and I hung out in the shallow end.

When I coaxed them into diving, Benjamin went first and did a mediocre dive into the pool. He got full marks for bravery with a few deductions for his form. It was impressive he tried diving at all.

Then Miriam got up for her turn and kept chickening out.

So Alexander calls from his perch on the stairs leading into the shallow end, "You tan do it, Mimi! You're not a tao-ward!"

"A tao-ward is when you doe to dive off the diving board but den you don't dive off," he told me. "And Miriam's not a tao-ward!"

Unfortunately, if we're going by his definition of the word, Miriam is a little bit of a tao-ward. Her dives from the side of the pool are as graceful as can be but she really psychs herself out on the diving board (I'm sure she'll get there, though, because Alexander's definition of coward is a little rudimentary and although Miriam has chickened out from the diving board several times, I'm sure she'll get it down in the next couple of weeks and the fact that she keeps trying proves that she's not a coward, in my opinion).

Lastly, one of the kids asked Alexander if he wanted to do something at the pool today and he said, "No, mank you!" and apparently that's just how he says "thank you" now and I'm loving it. He said it at the dinner table a couple of times today as well. "Pee pah buh water. Mank you."

I tried to screenshot it but ended up turning off the screen instead, unfortunately (my finger, at the time, was still pretty painful so my button presses were mis-timed).

Bridget responded back saying that she could tell that he was saying a whole bunch of stuff but loved that it pretty much just sounded like he was saying "bubble" the whole time.