I have been a stay-at-home mom since the day Rachel was born. I was so naively confident that she wouldn't possibly be born before her due date, so blissfully unaware that I would spend subsequent pregnancies desperately trying to keep my babies inside while I counted up until the moment they could safely be born (rather than counting down to their due date, like a normal person), that I gave my two-week's notice precisely two weeks before she was born.

She came two days early, the cheeky thing, and made me cut my last day of work just a few hours short (she was supposed to be born on Sunday but came Friday afternoon).

I've worked several freelance jobs since then—tutoring, editing, and (when extremely pressed) childcare—helping put Andrew through school (and school and school) while keeping our family financial situation afloat. But mostly I've been a stay-at-home mom, which has also helped keep our financial situation afloat (considering how costly childcare is).

I think I'm pretty okay at being a mom (World's Okayest Mom, right here), but I'm a hopeless housekeeper, which usually doesn't bother me...until it does. I feel like I'm usually pretty good avoiding the pitfall of comparing my worst to someone else's best, but sometimes social media gets to me, too. The other day my friend was posting pictures of her magazine-ready house, gorgeously decorated for fall. And then I looked around at my house and it's just so very different from that. My house was a...mess.

On that day Gretchen Goldman, PhD was interviewed on national TV. She wore a yellow blazer. Her house looked spotless. Dr. Goldman looks like she had everything together. And then Dr. Goldman posted this to Twitter and I almost cried with joy: 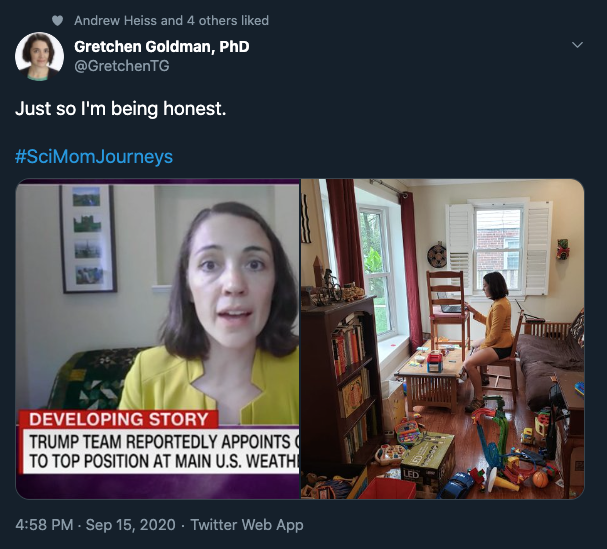 I'm not on national TV or anything, but...that is what my house looks like!

I'm so grateful to Dr. Goldman for being real.

That same day, Rachel had a youth fireside on the ills of social media. The speaker challenged the children to live like it's 1994. No social media. No phones. He's a pretty popular speaker and I'm sure he has some points to make about safety on the internet, but...living like it's 1994 ain't it!

We sat down to watch On the Basis of Sex this evening—Andrew and I, with Rachel, Miriam, and Benjamin (who begged to stay up to watch because he'd been excluded from Woman in Black last night, who also got bored halfway through and asked to go to bed but ultimately decided to stick it out) and I was struck by how that film shows the world changing. Decades fly by right in front of our eyes (almost as fast as they seem to be flying by in real life). RBG liked to quote the "great constitutional scholar Paul Freund [who] once said 'the Court should never be influenced by the weather of the day but inevitably they will be influenced by the climate of the era,'" and this was also quoted several times in the movie. I think it's okay for the world to change, so long as we adapt and respond to what is going on. I don't think sticking our heads in the sand and pretending it's 1994 is doing anyone any favours.

But all that aside, I was so struck by Ruth Bader Ginsburg's story. I'm almost crying just thinking about it. She was just so amazing:

Not that she wasn't doing great work before then. Because she was.
And not that I'm not doing great work now. Because I am.
I think RBG would agree. I think she would say that it's fine (she didn't have anything against stay-at-home parents), that there's still time for the little bit more that I need to do in my life. I think she would say that there's still time to dream, still time to achieve...whatever it is I'm after (clearly this is why I didn't earn an ivy league law degree by age 25). There's time to have it all...over the course of a lifetime.

I don't know exactly what it is I'm after yet, but I think this master's degree is a stepping stone and if our house is a little* untidy because of my distraction, so be it.

It was a little* untidy before, anyway.