Andrew turned 36 on Saturday—a perfect square, he noted, since Benjamin has been studying perfect squares. "I haven't felt so perfectly square since I was 25!" Andrew noted. We began his day with presents in the morning because Andrew knew he'd be getting a new toaster since our toaster has been on the fritz lately (it was the cheapest toaster we could find back in our grad school days when we found ourselves in the awkward position of having been married long enough that our wedding gifts were starting to wear out but not having been married long enough to actually be making any money yet...so it really was the absolute cheapest toaster we could find).

So he had to open that toaster, see, so he could have new toast for breakfast.

His birthday actually started much earlier than that because we let Daddy sleep in, but the three littlest who were so excited for Daddy's birthday (they just couldn't wait ( some were worried waiting might literally kill them (because some of them thought we intended to starve them until Daddy's birthday))) sang the happy birthday song to Andrew before they ate their breakfast.

Once Daddy was up we did presents. He opened the toaster last. Before that he opened a homemade Venetian carnival mask, which Benjamin constructed weeks ago and saved for this very occasion. He was so excited for Daddy to open it. 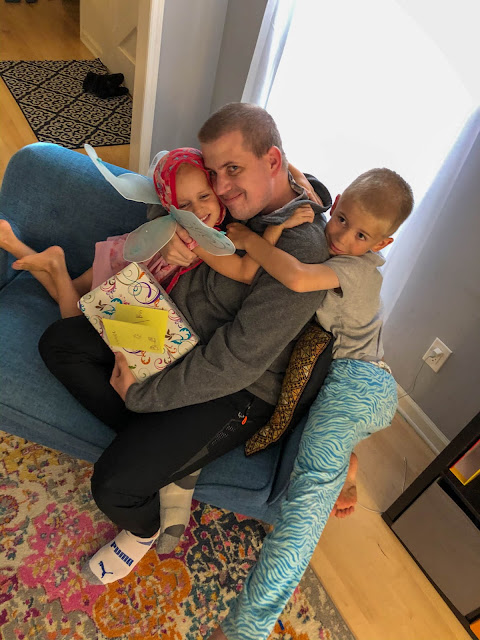 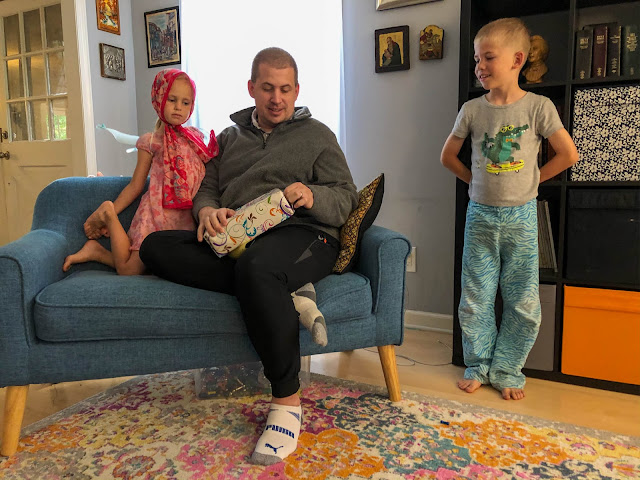 And here he is moaning after Zoë blurted out, "It's a carnival mask from Venice!" before Daddy had managed to open the box: 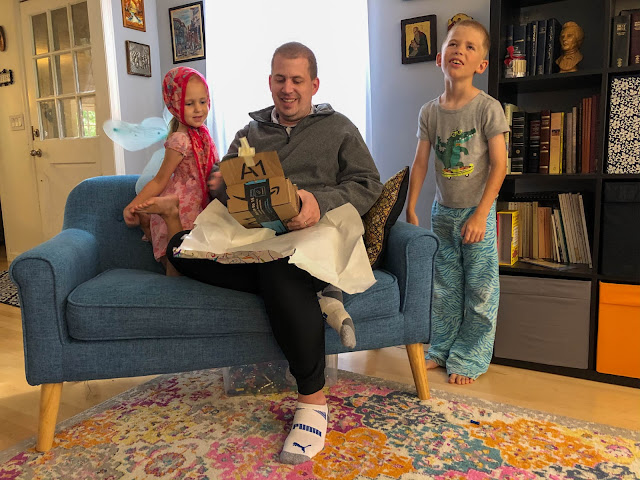 He was pretty upset about Zoë ruining his surprise: 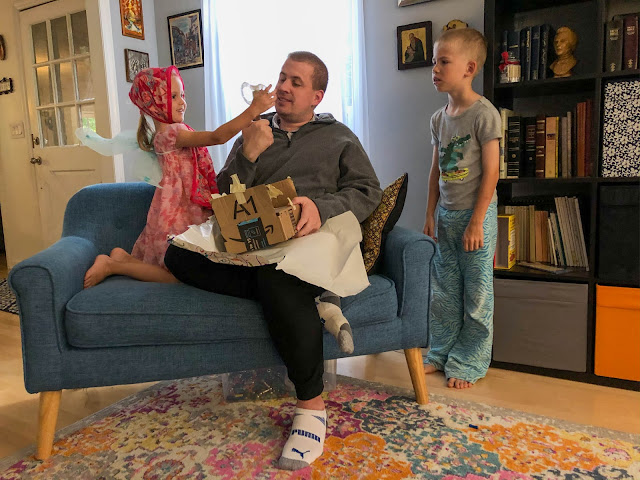 But Andrew acted like that carnival mask was the best gift he'd ever received, which made Benjamin feel better: 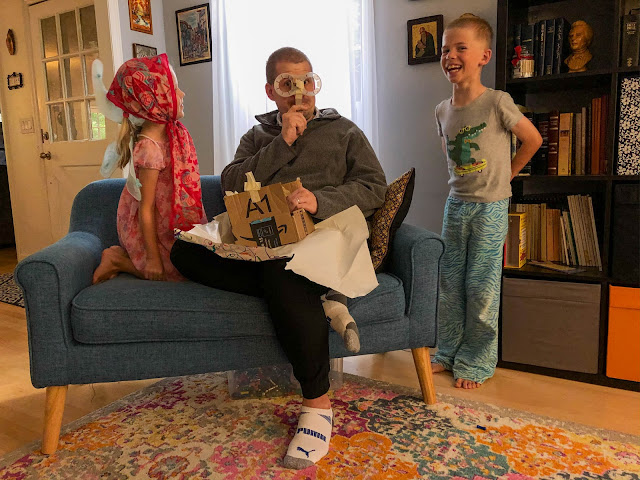 The kids made him a ton of cards. The bigger kids (Benjamin is included here; he's the amorphous middle child, the overlap between "the big kids" and the "wee ones," sometimes fitting in one category and sometimes in the other) all made him stats-y cards, which Andrew loved. 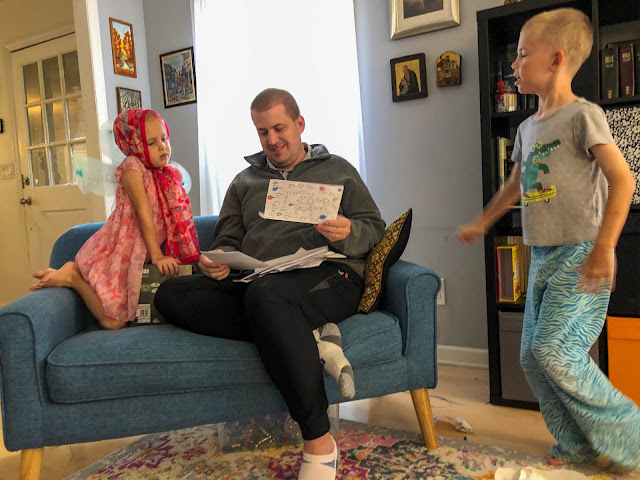 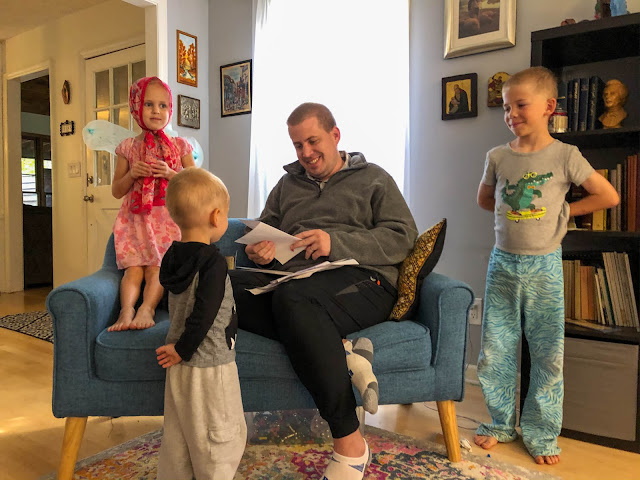 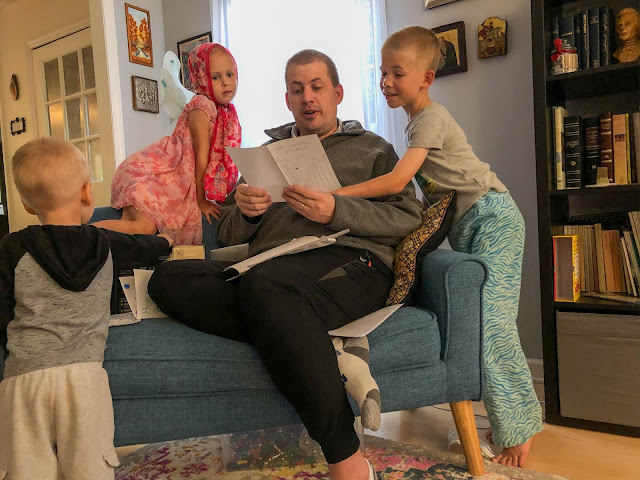 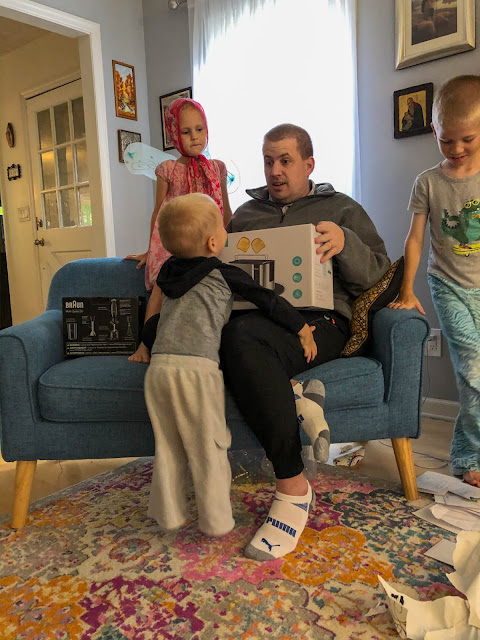 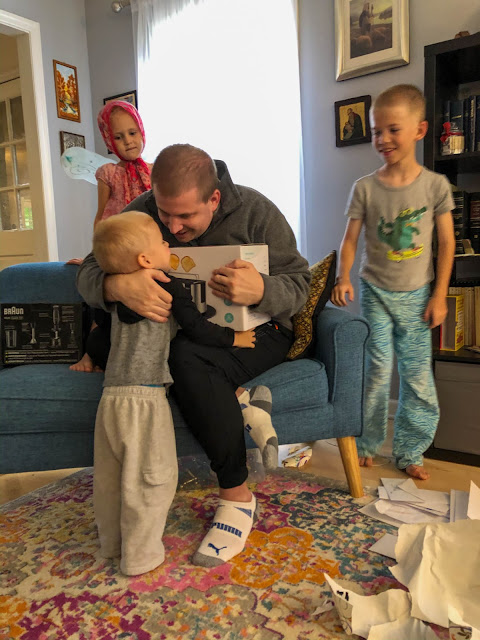 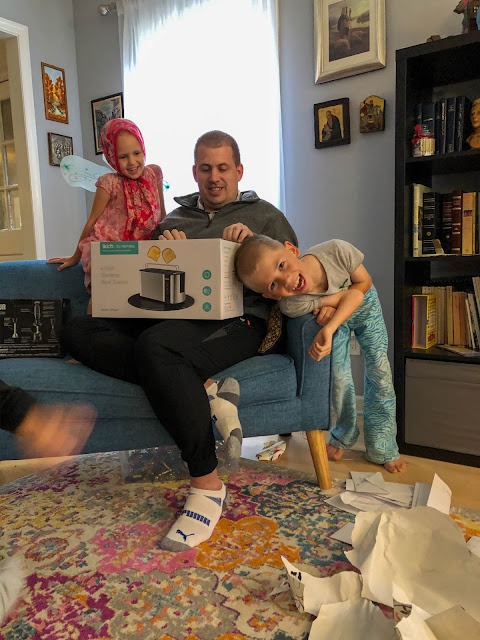 We had Andrew's birthday cake with lunch. Rachel made a lovely pumpkin cake with maple-cream cheese frosting and it turned out beautifully. Miriam helped her decorate it. Alexander had fun playing with fondant and Benjamin enjoyed stealing and eating fondant scraps (though I can't imagine why). The girls thought their cake hearkened back to Andrew's 2010 birthday cake (we decided we'll make him another leaf cake in 2030 and make it a decennial tradition). This time, though, I did nothing and they did everything (and sweetly let the non-helpers think they were helping)! I though the maple leaves were a nice touch and appreciated the red maple leaf placed right in the middle of the cake, an homage to their Canadian heritage (which their father doesn't share, though I hear he has a soft spot in his heart for Canadians). 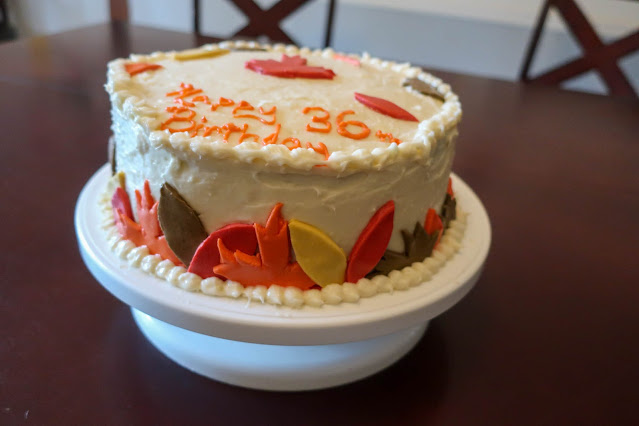 Here are the girls working: 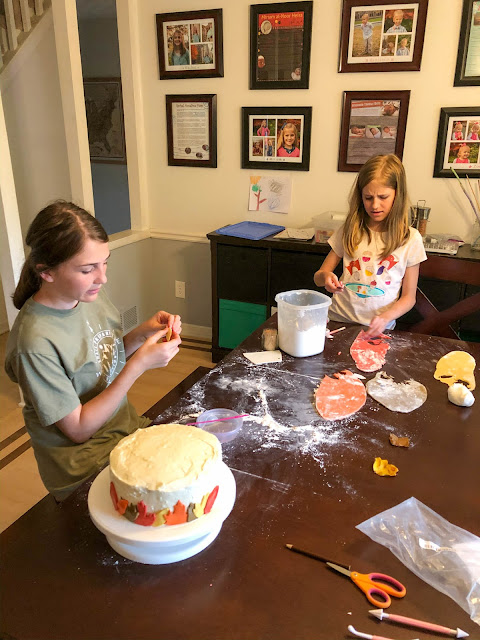 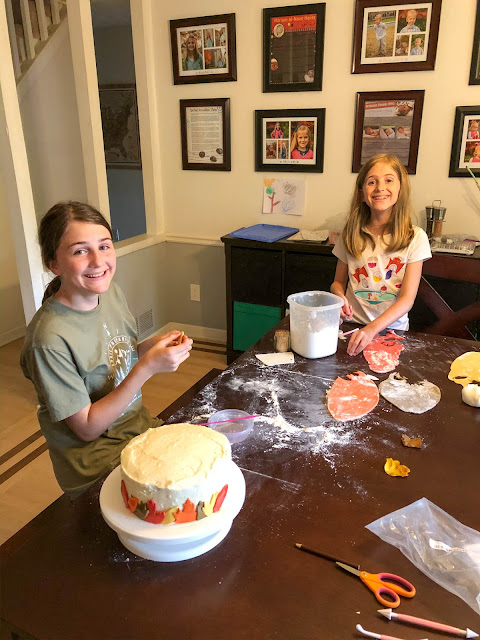 And here are the boys working with the fondant as well: 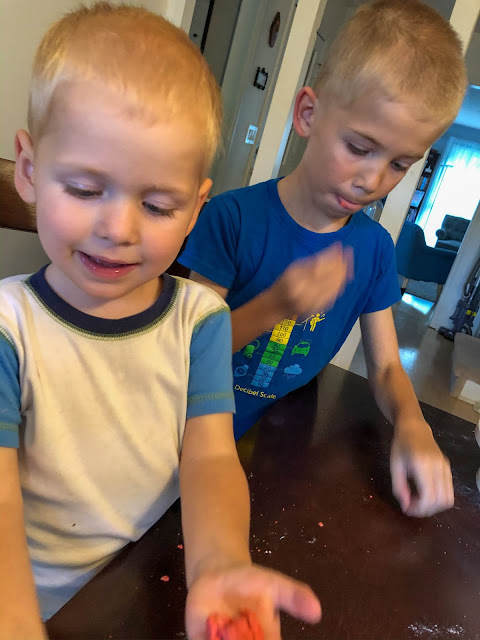 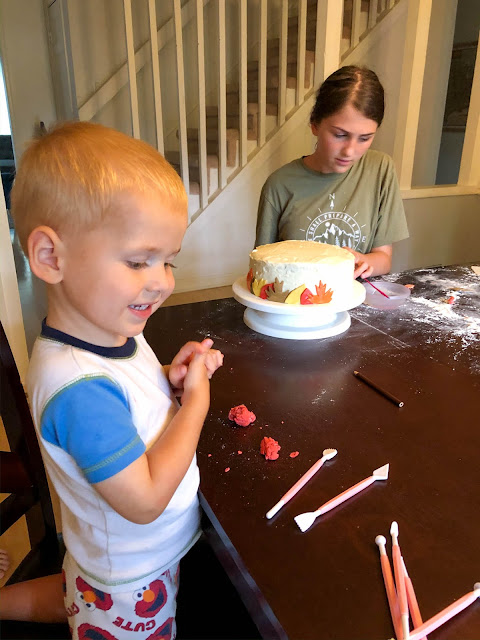 And a few more shots of the cake: 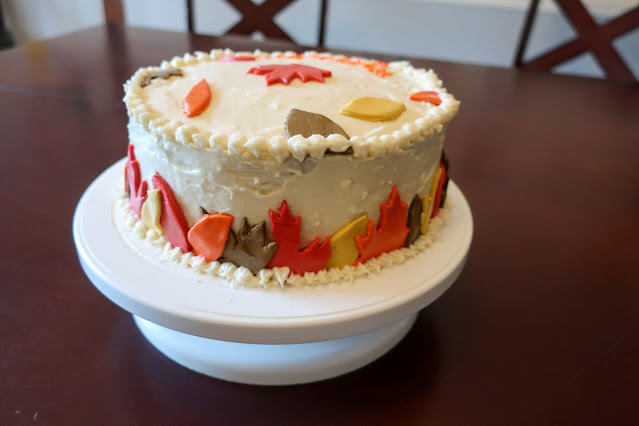 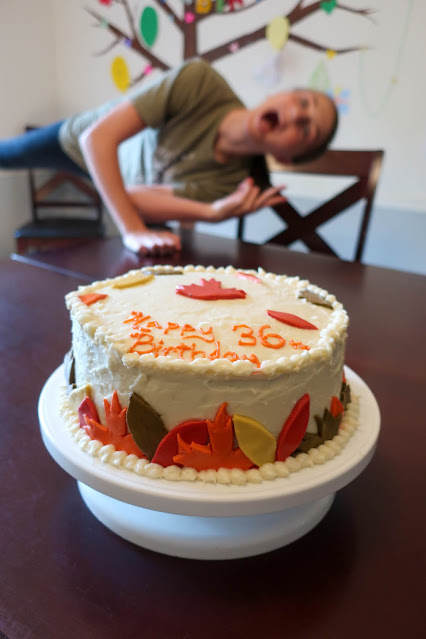 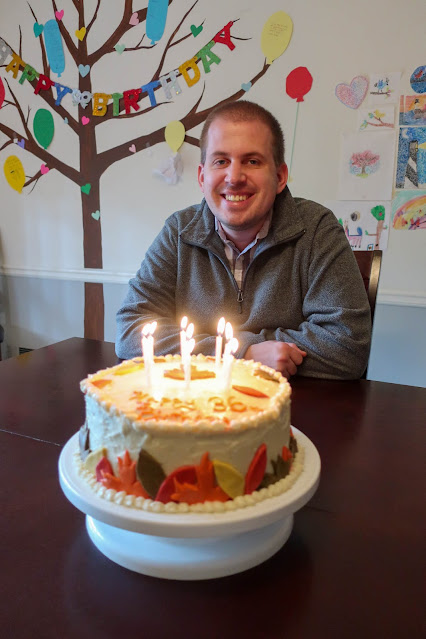 Here are the children gathered around Andrew: 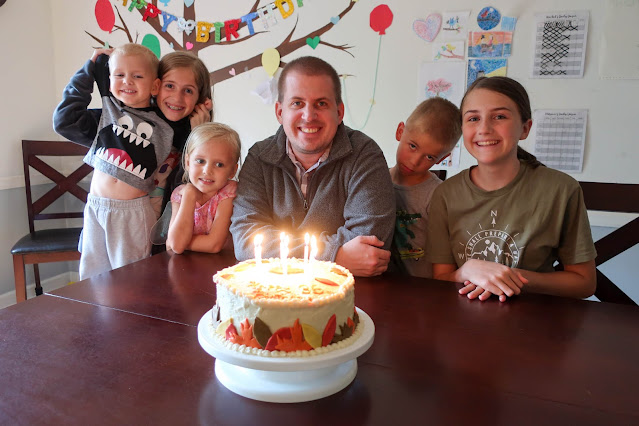 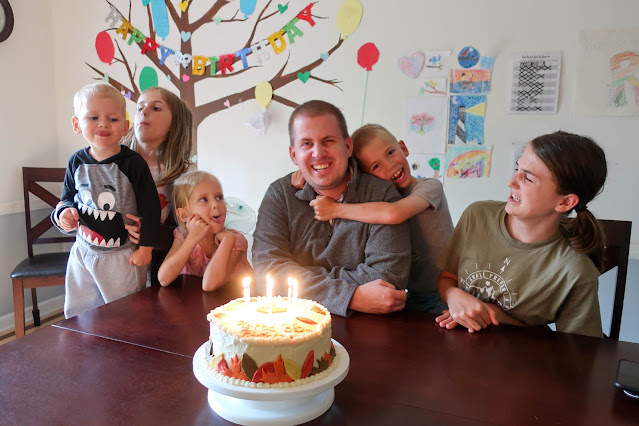 And here he is, waving his hands above his candles (9 candles, arranged in a perfect square (a 3x3 grid) and representing also 3 decades and 6 years (3+6), which is also a perfect square): 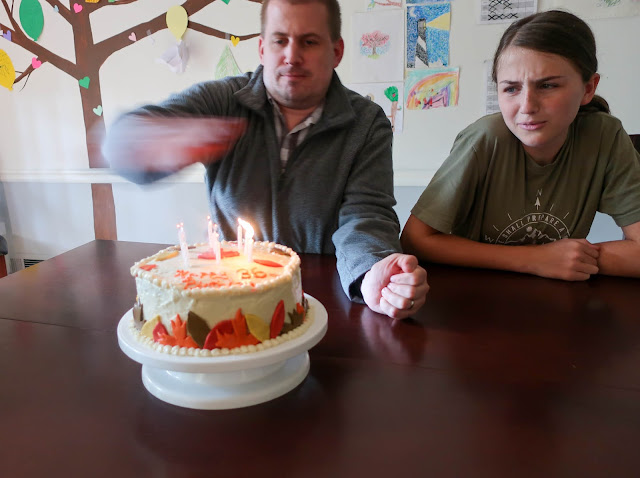 "What are you doing?" Rachel asked.
"Nobody wants to eat a cake I've blown on!" Andrew said. "Coronavirus!"
That just about killed Rachel. And while it's true that I wouldn't want to eat a cake that just anybody had blown on at this particular time in history, I'm 99.9% sure none of us have coronavirus because we have practically no contact with anyone outside our home. 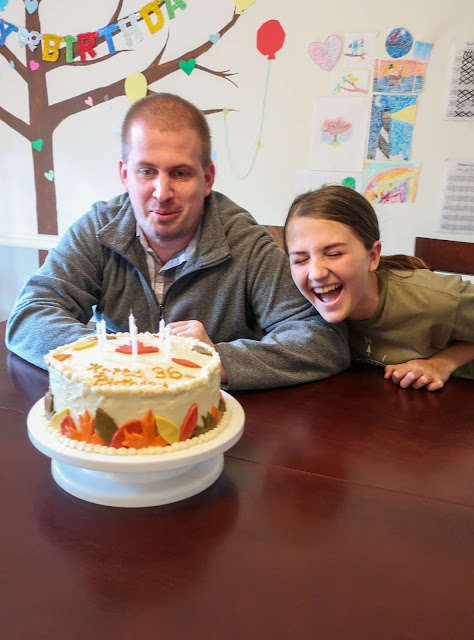 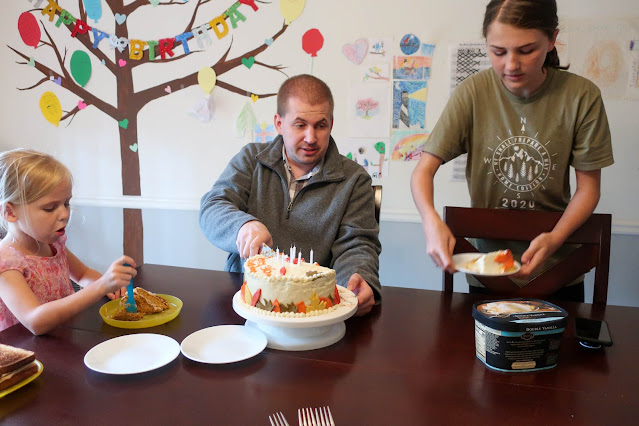 And here's Alexander, so happy to finally a have a piece of that long-awaited cake: 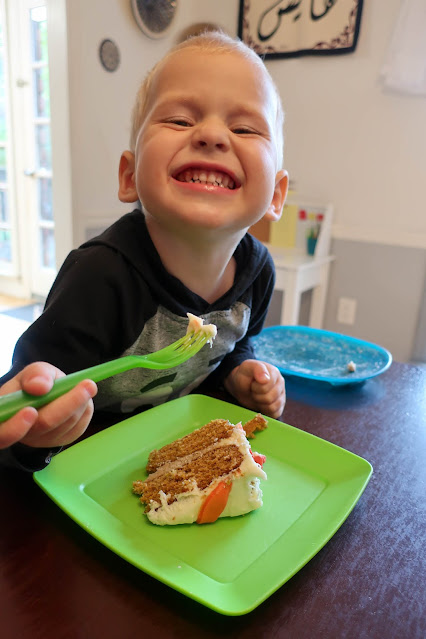 It was a pretty low-key birthday, like most birthdays at our house, but I hope Andrew his special day because we sure do appreciate him, which brings me, I suppose, to our birthday tree.
Alexander made several balloons filled with scribbles for Andrew while we were playing Settlers of Catan (I won, naturally, because I "always win," though I'm honestly not even sure how I do it).
Zoë wrote: "I love, love, love, love Dad because, um, he's good at: telling time, doing work, picking up Mom, doing everything right."
The "telling time" part is hilarious, I think. I don't know what made her think of that. The "picking up Mom" part is because Andrew swept me off my feet and into his arms the other day and evidently it's been a while since he'd done that because Zoë started squealing with delight. She was so impressed that Daddy could pick up Mom!
Benjamin wrote: "You are the best dad in the mortal world," and "I love you," and "My Dad is good at: copeying, teaching, being weird."
No one quite knew what he meant by "copeying." Rachel figured that he was good at impersonations, but...he's not...so we asked Benjamin to explain what he meant and Benjamin couldn't remember. After racking his brain for several minutes he remembered that he had meant to write "codeing" and not "copeying" because sometimes he mixes up d/p/b still. So, his dad is good at coding.
But apparently none of us were good enough at decoding to figure that puzzle out!
Miriam wrote: "You are really cool, funny, and good-ish (-ish only because Mom always beats everybody) at games. I love you so much, Dad!"
She also wrote an acrostic poem for him, but couldn't think of many adjectives that began with D so she looked some up online and came up with this:
Daft
Amazing
Dandy
When I burst out laughing and asked her about the word "daft" she said that she'd looked it up and it meant "silly," which Andrew is. But, I told her, daft typically has a negative connotation (daft is more like idiotic or stupid than silly/funny).

To make fun of her acrostic failure, Rachel also wrote a bad acrostic. She wrote:
Diabolical
Aging
Decent
Noting, of course, that this was only to make fun of Miriam. She then wrote a "nice" acrostic:
Dork (in a nice way)
Awesome
Dapper
And she wrote: "You are super smart, funny, and kind. You're an amazing dad (but Mom is better at games than you). I love you!"
I wrote: "Sometimes you do so much for me that I don't know if I do enough for you! Thank you for taking such great care of our family. You are an amazing husband, friend, father, priesthood holder, teacher, researcher, writer, bread-maker, chef, car-driver, grocery-getter, rant-listener, paint-peeler, decision-maker, musician, back-scratcher, coder, typesetter, bug-squasher, tooth-puller, lego-builder, game-player, photographer, photo-editor, world traveler...fun-haver!

Thanks for sharing life's adventures with me! I love you so much!"
And I helped the kids come up with a longer acrostic:
Four weeks ago we was the same as he is now.
Anrew from Orem, an excellent speller!
The absolute best!
Homemaking skillz on point.
Everybody likes him.
Reads and writes a lot.
We're such great poets. We spent the whole day trying to come up with the worst poem possible and I think this is it:
Dull
Adequate
Decent
But mostly that was just to entertain ourselves because that doesn't really describe Andrew well at all. He's entertaining, much more than enough, and utterly wonderful, but he's not an emu so we had to go with the dad poems instead.

Entertaining
Much more than enough
Utterly wonderful
Posted by Nancy at 11:38 AM