In my defense, Benjamin had been complaining about a stiff neck for several days in a row already, so when he began to complain at the park that his neck hurt really bad and he just wanted to go home, we all kind of ignored him. Because there was no moment of him shrieking in pain. He'd just occasionally stop playing to complain about his stiff neck (by hid own admission, he "must have slept wrong") but then something exciting would call to him—jumping off that ledge, climbing up that tree—and he would run off like nothing was the matter.

His neck was still plaguing him at bedtime, but he so often gets out of bed to complain that he can't sleep because _______ just doesn't feel right.

So I said what any caring mother would say:
This morning when I met him at the breakfast table I just about panicked, however. Benjamin's neck was visibly swollen.
"What's wrong with your neck?!" I asked.
"I dunno," he said. "Hurts a bit. I think I slept wrong again."
"No! I think you got stung by a bee!" 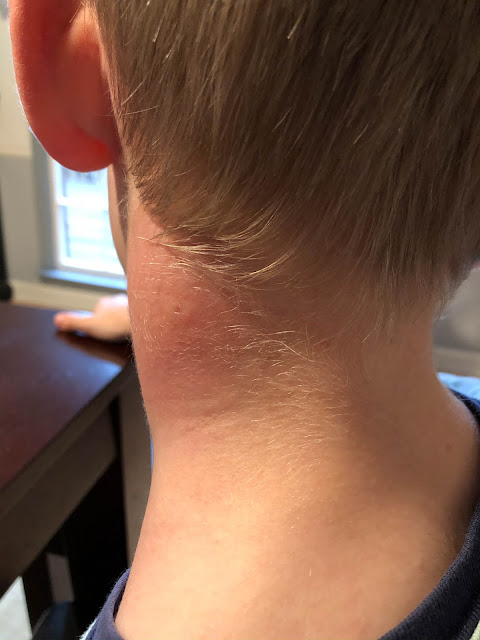 So that's my diagnosis. He was clearly stung/bit by something and we're pretty sure it happened at the park while we were playing yesterday (there were bees around but didn't think we were bothering each other; evidently I was wrong about that). There was no stinger, so I put some hydrocortisone cream on his neck and we've been applying ice off and on all day.
We looked up a bunch of videos about bees and how they sting and whether they always die when they sting (they don't; they can actually pull their stinger out in tact if given enough time). Chances are that the stinger was stuck in his skin for quite some time, though; given how swollen he is I suspect it injected all the venom it could. Poor kid!
This is his second bee sting (his first was 5 years ago), which is how many stings I've had in my whole life (which has been considerably longer than his), so he's really packing these in here! The sad thing is that he always gets stung when he's just minding his own business.
One of my nephews...I can't remember if it was Matthew or Andrew (I have a feeling it was probably Andrew)...got stung by a number of wasps in the backyard of "the Orem house," but they totally deserved it. He said, "I don't  know why they started to sting me. I was just playing with them!" And I said, "What do you mean 'playing with them?!' What game could you possibly be playing with a wasps?!" He answered, "Hittin' 'em with a stick."
It was both sad and hilarious. We treated his wasps stings, but he deserved every single one of them because playing "hittin' 'em with a stick" is a...ridiculous...game to play with a wasp (or multiple wasps). But Benjamin wasn't playing "hittin' 'em with a stick!" He was just living his life and happened to get in the way of an impatient bee, poor guy!
Posted by Nancy at 4:59 PM