There's been quite a bit of creativity happening at our house lately. I don't have pictures of everything, so I'll just share the few pictures that I do have.

First up is Benjamin's original composition for the piano. The assignment I gave him came from Faber's primer level piano book and it was to play the "musical question" and then "make up a parallel answer of your own by changing measures 7–8" of the song (and then, further, to "make up a contrasting answer" to the same piece). Somehow he interpreted this to mean that I wanted him to create his own piece of music using the ideas of parallel and contrasting melodies, which...I mean...I'm not complaining: 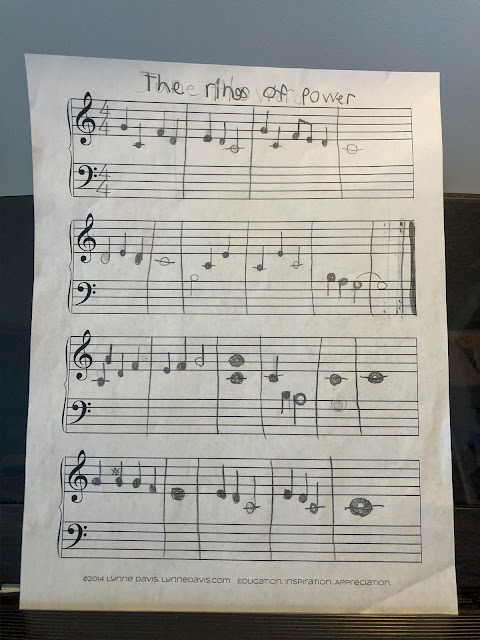 It took him forever to work out the musical notation and I'm super impressed he stuck with it.

He inspired Zoë to write her own piece as well, which she dramatically titled The Flowers of Rain of God. Her notation is a little less...conventional...but her piece was equally impressive for a five-year-old, I think. She told me that the opening of her song "grabs a little from Good King Wenceslas," which I thought was a clever little bit of "borrowing."

Tonight while we (Andrew, Rachel, Miriam, Benjamin, and I (without any emotional outbursts)) played Ticket to Ride, Zoë wrote another tragic little story (or started one, at least (she's planning on finishing it tomorrow)). It's called The Monkey and the Zookeeper. 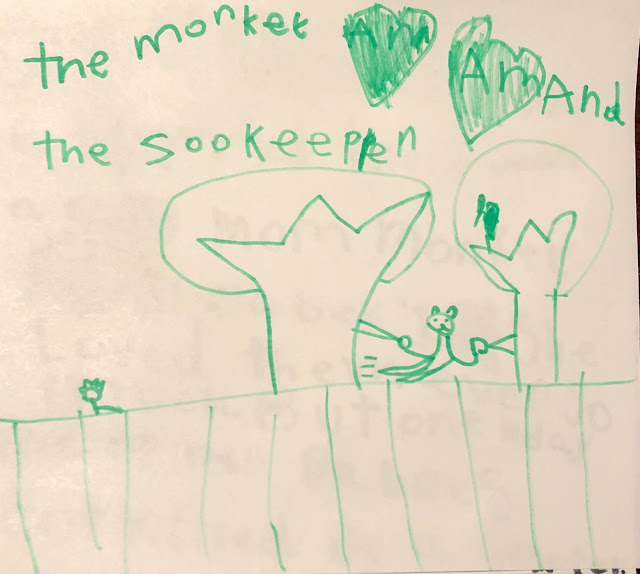 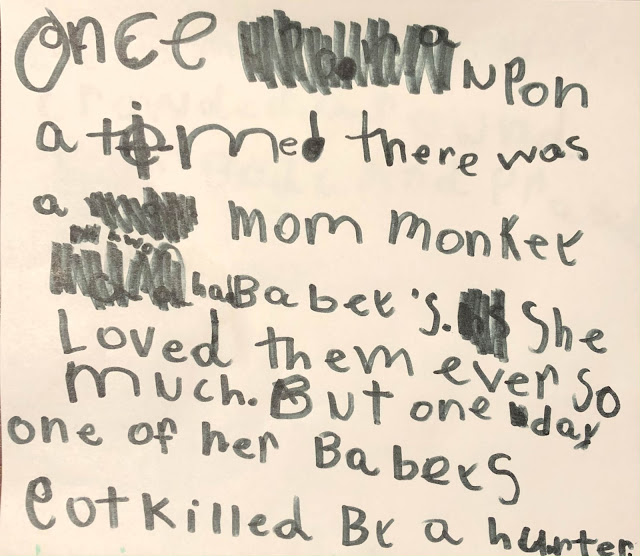 Once upon a time there was a mom monkey who had babies. She loved them ever so much. But one day one of her babies got killed by a hunter. 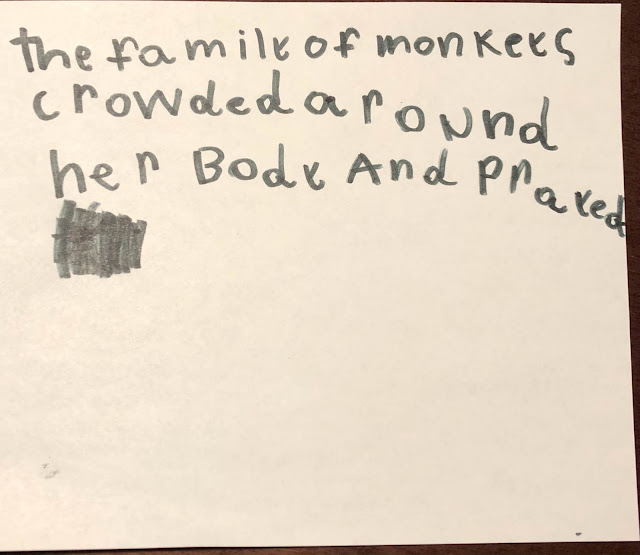 The family of monkeys crowded around her body and prayed.
And that's about as far as she's gotten, so we'll have to see how this poor monkey family handles their grief and where the zookeeper comes in later.
Alexander spent the afternoon "making up toys and stories" and making me make up toys and stories with him. He made all these little paper people to put in a paper house he'd built and together we drew a road/map for the little rock car he made yesterday. 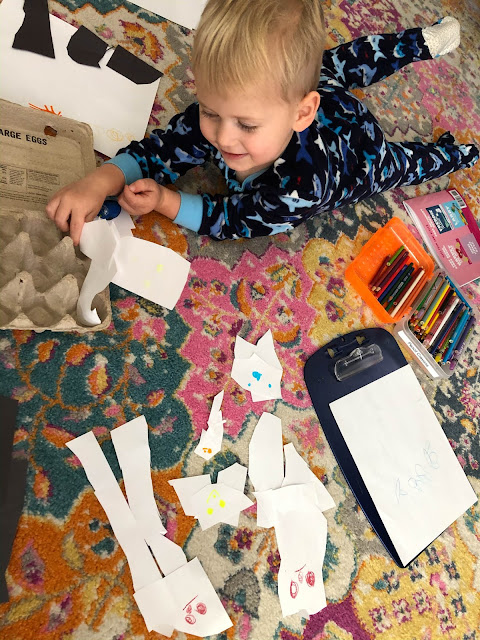 My sister Kelli sent a box of surprises for Valentine's Day and we dug into things a little early because this weekend was so cold and drizzly. Here they are working on their rocks: 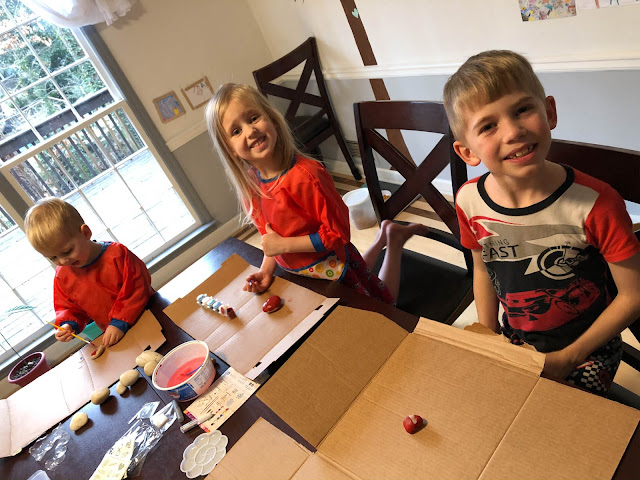 Alexander made an owl (because he loves owls) and a car (because Benjamin made a car). Zoë made a ladybug and Miriam (not pictured) made a lovely sky as well as an underwater scene. 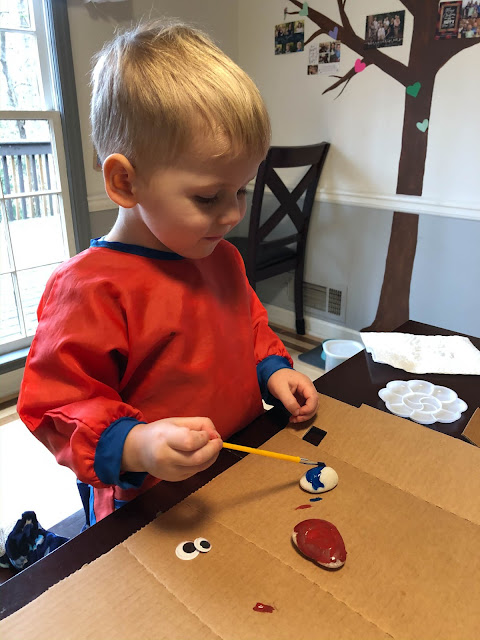 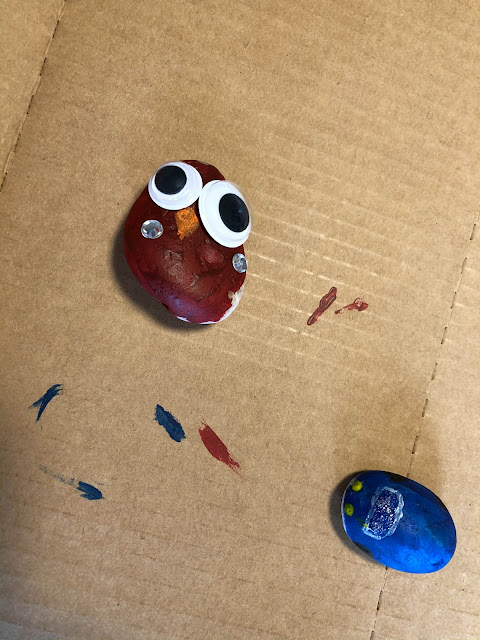 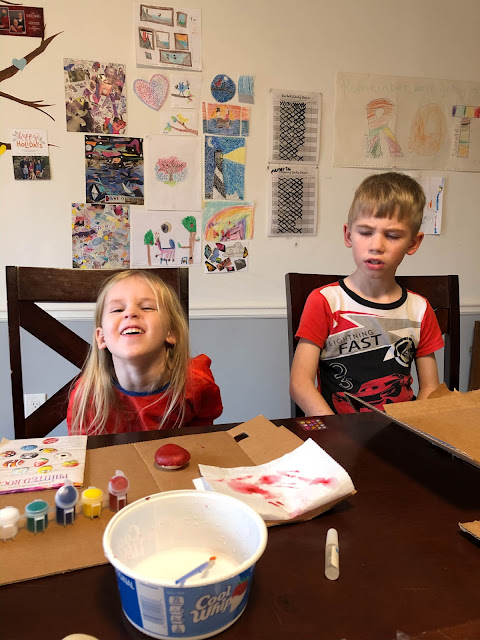 We had fun playing with the googly eyes that came with the set. Zoë was the first to put them on her own eyes, but then the kids decided that Alexander should do it, too, because when he was a teeny little baby Rachel put googly eyes over his eyes once. 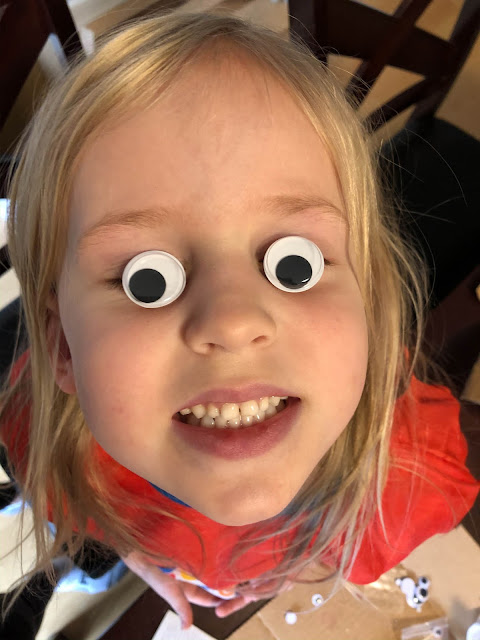 He didn't really want to do it, so I bribed him to cooperate (A+ parenting, right here). Naturally, the picture turned out rather adorably. 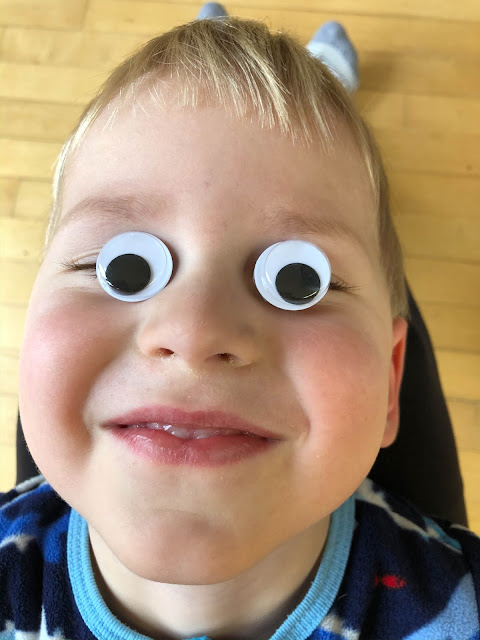 And as you can see from his baby picture (or this picture that I took of a picture that is on our fridge), he's growing up to just great: 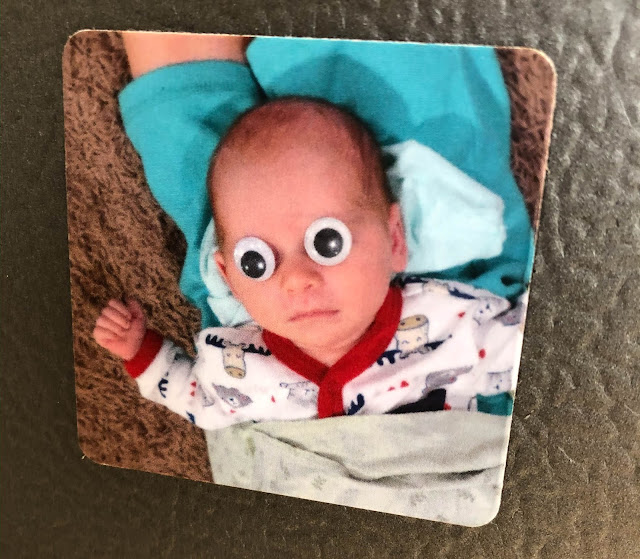 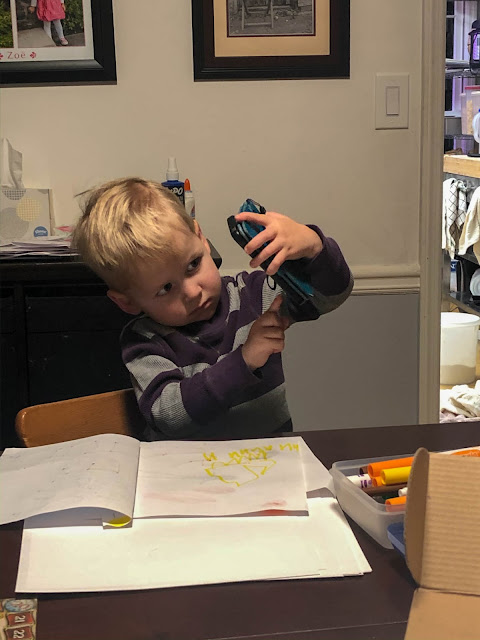 All very meta of us. 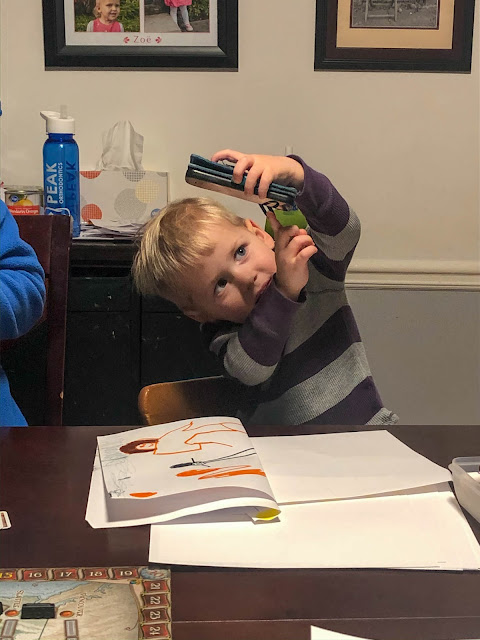 He also was very maturely swiping through the phone to check on the news and the weather. He loves checking the weather. So, he pulls up the weather app and he studies the phone for a few minutes, slowly and seriously raised his gaze to look out the window, then gave a nod of approval.
It was the most hilarious thing and he couldn't quite understand why everyone was laughing so hard (which was mostly due to his solemnity about the whole thing).
"What?' he asked. "The weather on the phone said it is night, and it is night!"
I can't say that I'm thrilled he's learned to work the stapler, but it was coming down the pike, to be sure. You see, we had to ban adhesives the other day. Alexander loves glue. He'll stick anything to anything, but mostly he just cuts paper into shreds and sticks them together in a big pile (so really the fact that he made paper people this afternoon was a huge breakthrough for him). It kind of drives me bonkers because it makes a big sticky, nonsensical mess (and wastes a lot of glue).
So the other day I stopped him from playing with glue.
"No glue!" I chided. "Glue is for special projects, remember? We don't just play with glue!"

"This is a special project," he said.
"Buddy, you have no plan! You are just cutting and gluing everything and I just...no more glue."
"Fine," said Alexander as he saucily walked to the school supply cabinet and pulled out a roll of masking tape.
"Arrrrgh," I growled. "I said no glue, but that also meant no tape!"
He wastes a lot of tape, too.
"No adhesives!" Miriam quickly clarified.
"Yes! No adhesives," I said. "That's anything that sticks anything to anything else. Just no to anything sticky for a while, okay, buddy?"
Staplers aren't technically sticky. So I see that's how he will win this battle.
(Though we all know he was into the glue this afternoon anyway, don't we? (And he wasn't really ever banned from sticky stuff...we just needed a little break from the sticky stuff for a little while.))
Lastly, Rachel finished her first cross stitch for the year. She has a goal to finish one cross stitch pattern every month this year. She learned a lot working up this little sampler and is excited to try bigger, more complicated things. 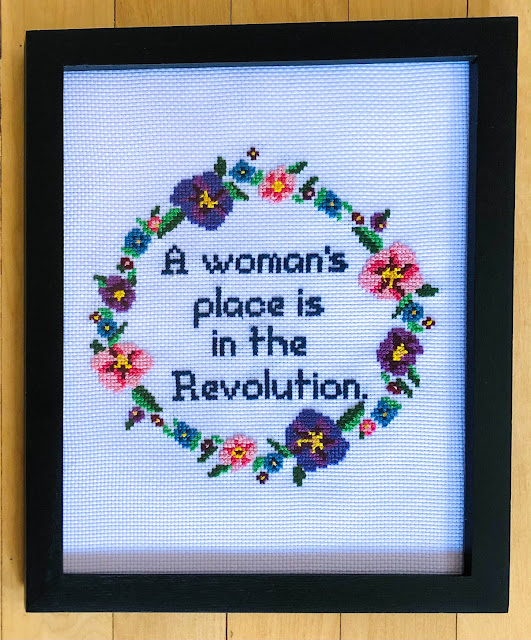 I am not sure why I don't have any pictures of Miriam's endeavors. She painted rocks with us, she baked cookies this afternoon (oh, and Rachel made bagels for dinner and they were delicious). And together she and I are working on a duet of Vivaldi's Spring. So she's doing a lot of things, too. I...just failed to capture any of her recent creative moments with the camera. We'll catch her doing something cool next week...
Posted by Nancy at 12:01 AM