In which I didn't call the fire department...

We were at the playground (again) the other day and the kids were playing a modified game of "grounders" (my kids don't close their eyes when they are "it" and the "it" player can't touch the platform with their feet). Zoë was jumping her way across a bridge—one of those "perfectly safe" bridges designed to keep children perfectly safe. There was no way she was going to slip between the railing and break her arm (like my friend's son did at the playground a few years ago) or anything like that. So she was jumping with quite a lot of confidence.

Then she landed a little too close to the ledge and her leg slipped in between the railing and the bridge and...that was it. She was stuck tight. Completely wedged in. And she was not happy.

She tried pulling her leg out but could not free herself.

I tried to help her force her leg out. Nothing.

We rotated her leg, trying to find the smallest possible radius...because here's the thing:

My kids (by and large) have spindly legs, knobby knees, and tiny feet.

I don't know where they get that from.

It's likely the playground engineers thought their design was infallible. They probably considered every possible scenario on that bridge and in precisely 0% of those scenarios did they see a child getting hurt. But they probably also didn't consider a child with the dexterity of a daring five-year-old wearing shoes the size a two-year-old might wear. But that's where their models went wrong...

And now my five-year-old was being squished to death by this bridge (if her screams were any indication of her mortal peril; in truth she was fine because her thighs are twiggy as well (but she was stuck...on account of her knobby little knees)).

For reference, this is the bridge (though this picture is from last year, almost to the day, when my mom came out for a visit (you know, back when we used to do that kind of thing); I don't have a picture of Zoë stuck in the bridge because, well, I was actually concerned for her safety (she was screaming a lot) and I didn't think to stop and take a picture): 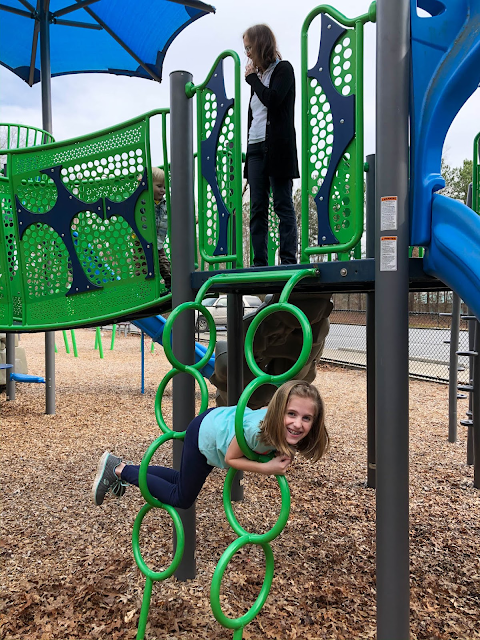 Try as we might, we could not create the same force/trajectory/whatever necessary to reverse her leg out of its predicament. She was howling. Yet somehow the onlookers (and there were several because some organization was holding an outdoor hoopla at the neighbouring pavilion) decided we were probably just fine. Which we were. But also not okay because we were quickly running out of options. Eventually we'd have to go home...but that's kind of hard to do when you find a member of your party suddenly very attached to the climbing equipment.

I took a few minutes to coach Zoë through some deep breathing while I thought of our options. Calling the fire department was climbing higher and higher on my list, but I wanted to be sure that I had truly exhausted all other ideas first. Have Andrew bring butter? Have Rachel pull her torso while I push her leg up?

I realized that because Zoë had been jumping across the bridge it must have had some sort of movement to it. The bridge is not very flexible, but it also isn't entirely stationary, you know? It has some give. I don't know if that makes sense but it's how this bridge is. I tried pushing the bridge sideways, to give Zoë a little more room to wiggle her leg out, but that didn't work. I could hardly get the bridge to budge. So then I thought that as she was jumping (which she had been), the bridge would have been moving up and down, so I pushed the bridge up as hard as I could—probably only moving it a centimeter, if that—and Zoë quickly pulled her leg free.

That's all she needed (phew!) but how would anyone ever manage to free themselves from such a predicament when their body is on top of the bridge?! I suppose the answer is to simply not get into such a quagmire in the first place (but, as you can see from that picture of Miriam, my children enjoy tempting fate).

Zoë's knee is a little bruised, but otherwise she's just fine. She asked if we could do some yoga when we got home so that we could stretch out her knee. I told her that we might be able to, but then Miriam had to be getting off to music lessons and Rachel had to do some things to get ready for young women and Benjamin also declined. Zoë had her heart set on playing our little "yoga spin" game. She was upset that no one wanted to play with her in her hour of need.

"I can turn on a yoga show for you and Alex," I suggested. "That way you can still stretch out your knee if that's what you want to do..."

"A regular show will be fine," she sniffed. "What my knee needs now is some rest."

So she and Alexander settled in for some "Mickey Mouse Clubhouse" instead, which was fine because they had already gotten plenty of exercise.

Miriam later joked that we should have named Zoë Brittany, which confused everyone until she said, "Brittany. Bridge-knee. Get it?" (It's at least a little funny; though, indeed, it would have been much funnier if Zoë's name had been Brittany, though I think a better name to have in this particular case would have been Bridget.)