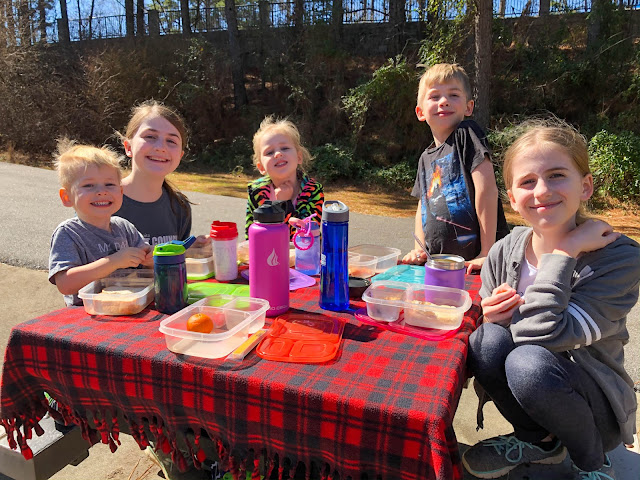 We did most of our schoolwork at the park today, packing along our lunch and all of our books and half the house. Today was our first lovely day of spring; I hope we have many more before the weather turns hot and humid. We try to enjoy perfect weather when we can.

This particular park is one that many people have told me is "sketchy," and I can't figure out why they think so because Jones Bridge Park is kind of the "popular" park to go to and I think that park is sketchy. I mean, I actually think both parks are fine, but this particular park's bathrooms never (or, at least, rarely) ever smell like...teenagers have been using them as a hideout to smoke illicit drugs...while Jones Bridge Park's bathrooms routinely do. I'm just saying...

Besides, Jones Bridge Park is so popular that it can be hard to find space to be alone. This other park is a lot less popular, so while we did have several people walking the trails beside our picnic table, we didn't have to compete to find a picnic table (and when we went to play at the playground we had it all to ourselves, which is important when you're social-distancing).

Anyway, we did our math in the morning, had lunch at the park, and then got started on our language arts. We read and talked about poetry and then tried writing some of our own poetry outdoors (to spite Robert Frost, I guess, and try out Mary Oliver's methods). 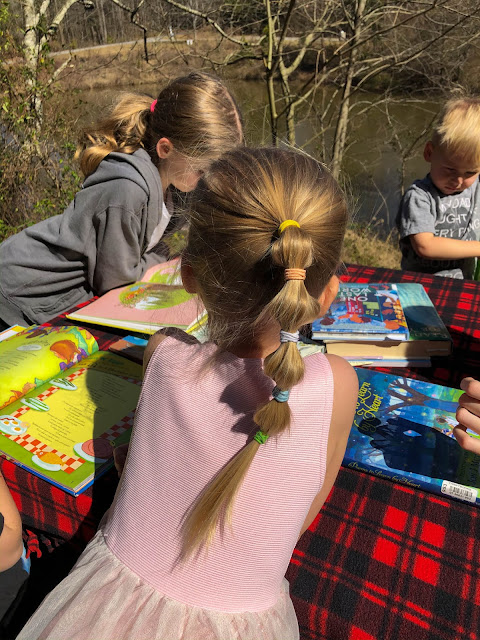 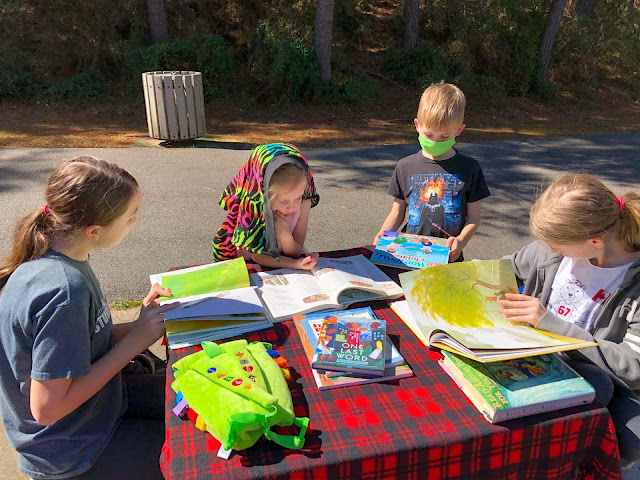 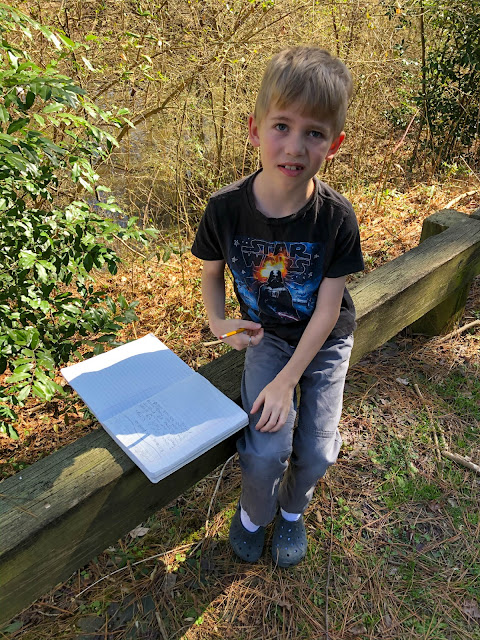 After writing our poems, the kids did some plein air painting (they so kindly reminded me that the last time I planned on doing this I lugged along all our painting equipment...except the paintbrushes (I remembered everything this time)). 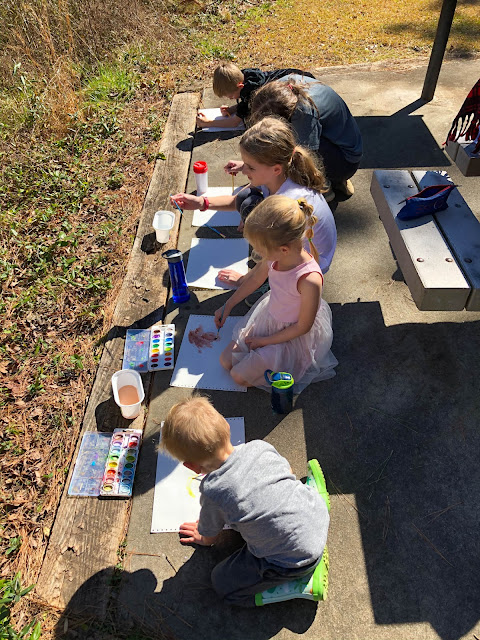 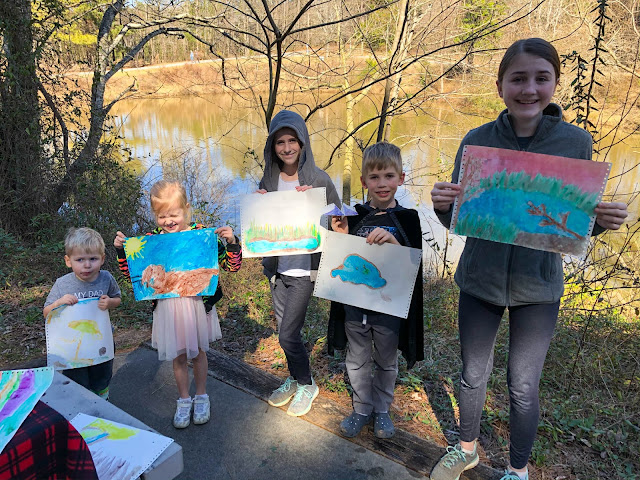 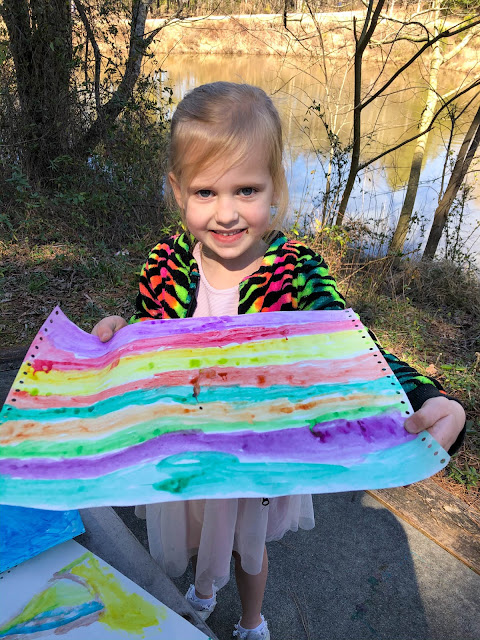 I thought Miriam's pond was beautiful: 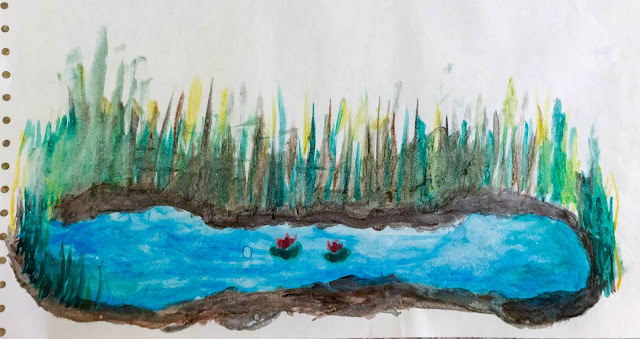 Rachel wrote a poem about a branch that was really quite lovely:
Wizened, crooked, brown and dry
The low-hanging branch is not so high
Over the pond as it solemnly stands
Only to nature's will it bends
Refuge it is for birds and bees
It provides joy, even separated from its tree
It has no face to show a frown
Torn from its home, but it did not drown
Not part of the water and not part of the ground
It has no mouth to make a sad sound
The long branch sits, melancholy yet peaceful
It story may be sad, but to me it is hopeful. 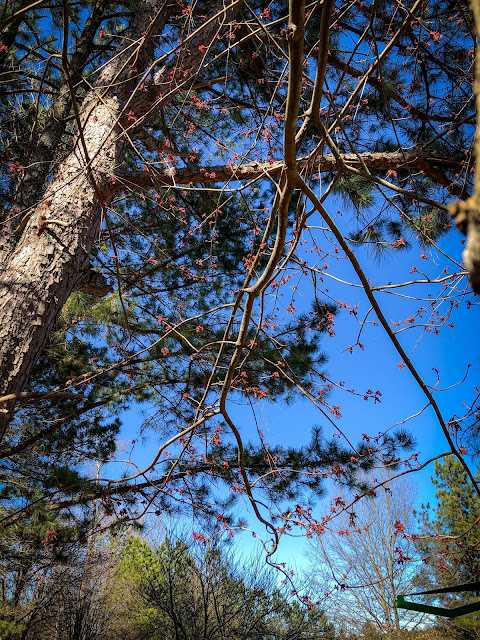 After much coaxing, Benjamin produced some observations of the world around him:

nature is a funny thing
all the bugs and trees and animals
in every country across the world there had to be some nature.

After even more coaxing he produced something more acceptable:

A turtle that lives in a pond.
A pond that is brown.
The turtle that's black and yellow.
All lived together in the little state of Georgia.

Sometimes getting him to write is frustrating. Sometimes he really takes off. Here's a poem he wrote last week that was much better than anything he wrote today (perhaps he simply needs more defined parameters):

Alexander did some fantastic jumping at the playground (piles of mulch had been delivered to the playground but not yet graded, so he loved having access to these temporary hills): 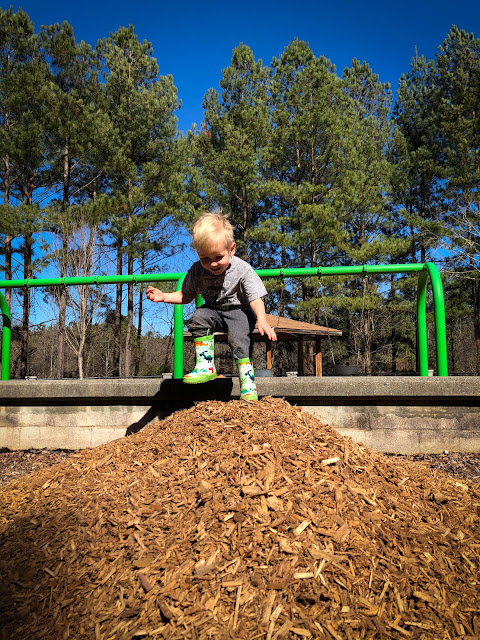 I also managed to write a poem between answering everyone's questions and running children to the restroom. I'm not entirely in love with it, but I'm satisfied with it as a draft:

The wind caresses my skin,
A foreign, gentle touch
After spending winter wrapped in
Cotton, fleece, and such.

This nothingness, this breeze
Whispers in my ear,
Plays with my hair, tickles the trees.
We shiver, knowing here—
To the wind—
We are the same.

Cautiously it stirs the pond.
Rippling fingerprints
Repeat a quiet soothing song
That speaks of spring, a hint

It was a beautiful day and it felt good to shake off our routine a bit, while still getting most of our work done (we did neglect science and social studies a bit, but we'll catch up on that later in the week).