It's been a battle to keep this house dry from the very beginning. Within a month or two of moving in we realized that three of our four bathrooms were leaking. We've been using stop-gap measures to keep things from completely falling apart but we finally decided to pull the trigger on our master bathroom when I sneaked into the office closet to eat a snack and saw that our ceiling was *this close* to falling apart. Our stop-gap measures were no longer...stopping things.

So we had a contractor come in to fix things up for us. He sealed off our room, making us feel a bit like we were living in ET's plastic tunnel. But it kept things nice and tidy. 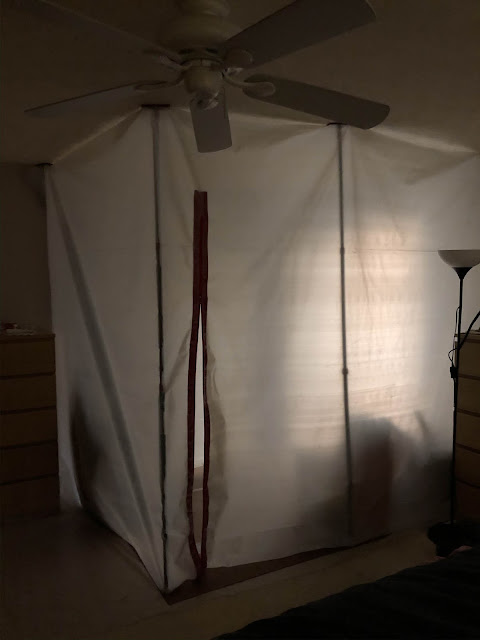 Our old shower came out pretty quickly and that's when we discovered that some of the clapboards evidently had rotted and were replaced, but without fixing any of the damage the a constant leak caused the frame of the house. So we had to rebuild the framing behind the shower. And by "we," I mean "our guy," because we have no idea what we're doing. 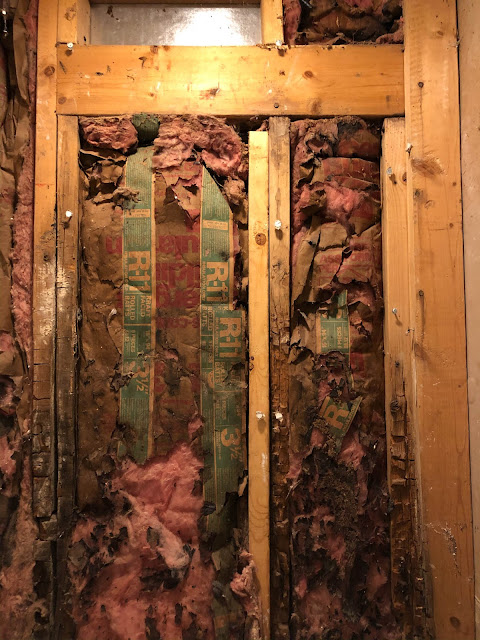 I was shocked to find out that there's virtually nothing between our house siding and the inside of our house. I feel like I'm living in only half a house! We have our dry wall, our insulation, a thin cardboard-esque liner, and then our siding. My mind is completely blown, but I guess this is fairly normal construction for the area/era. You can see here where the liner has completely disintegrated and you can just...see...our siding from the inside of our house. Wild! 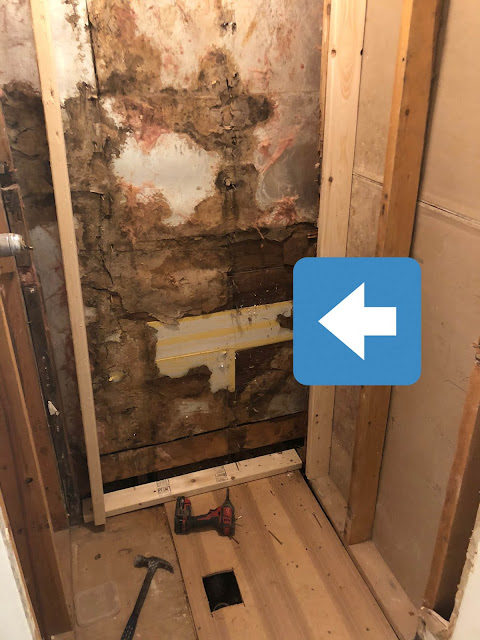 I feel like I grew up watching houses being built. My brother and I (and sometimes some friends) would scavenge around construction sites for pop bottles (which was a fabulous source of income for us as children; I'm still a little miffed that most places in the states don't do bottle returns). Anyway, all the houses I ever saw being built were solid wood on the outside. For example, this is the house my cousin is currently building on his farm: 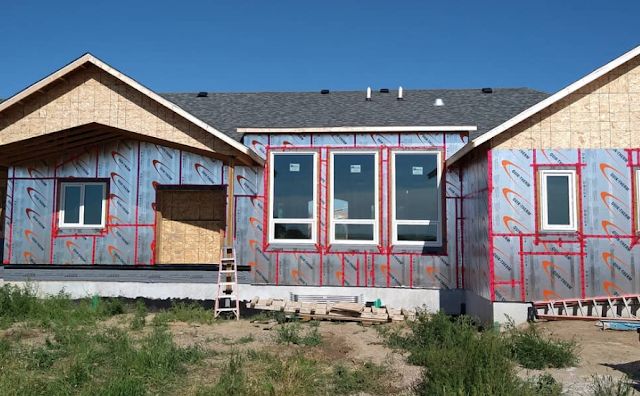 Solid wood everywhere. The siding will go on top of that. I'm sure it's more energy efficient, though it probably makes the overall cost of the build more expensive.

Anyway, our contractor tore out the rotten frame and rebuilt it from scratch and reattached the clapboards (which had just been flapping in the breeze). I'm kind of annoyed the previous owners didn't do that because there's evidence that they'd been back there doing some work at some point in time—see the new 2x4 that they nailed against a rotting 2x4? Sheesh. 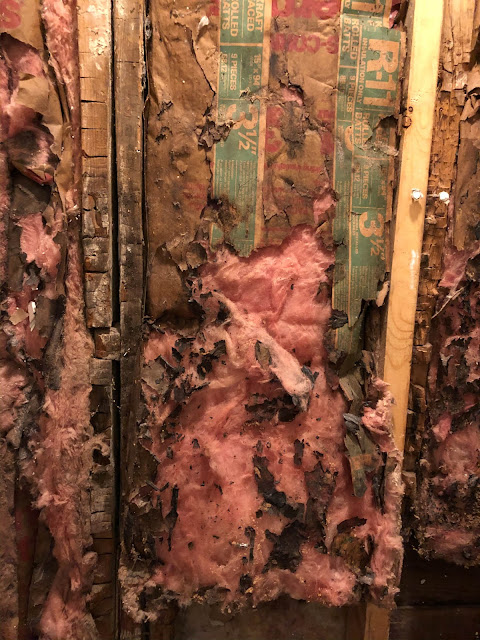 We also had to replace our subfloor under the shower (which we'll have to do in the other upstairs bathroom when we get around to it). One of our "stop-gap" measures was simply to regrout the tile floor of the shower (over and over again). No matter how many times we fixed it, though, it would soon fall apart again (probably because the subfloor was falling apart) so we'd have to fix it again... 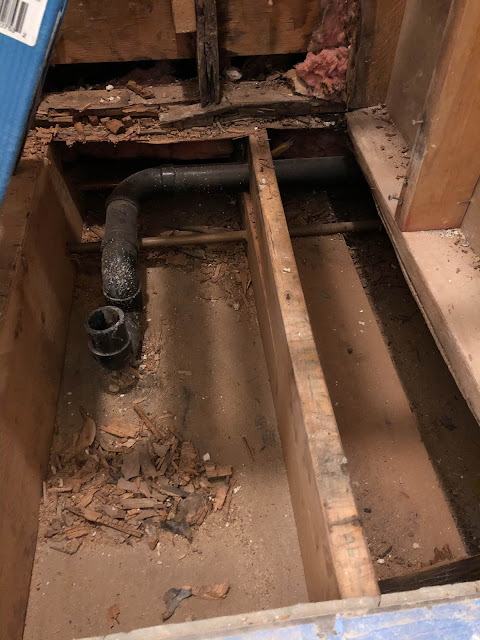 Here's the cement board backer board up and coated with a water-resistant moisture...layer... (Zoë wanted to keep it red). There's a vapor barrier behind the backer board as well. 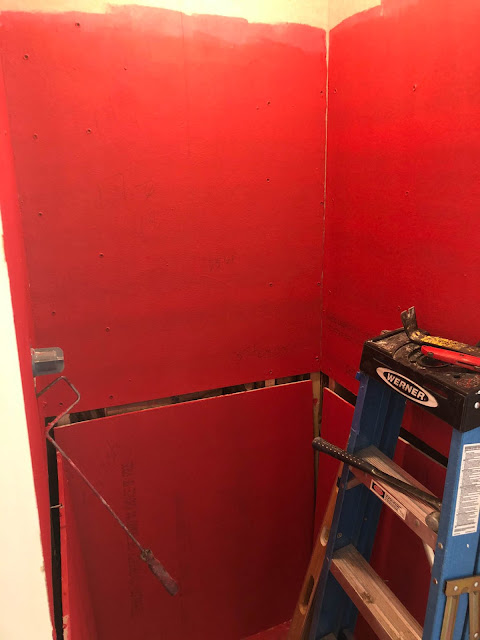 We decided, therefore, to go with a one-piece cultured marble shower. It's easier to take care of and shouldn't leak ever again, hallelujah! Here's the almost finished product: 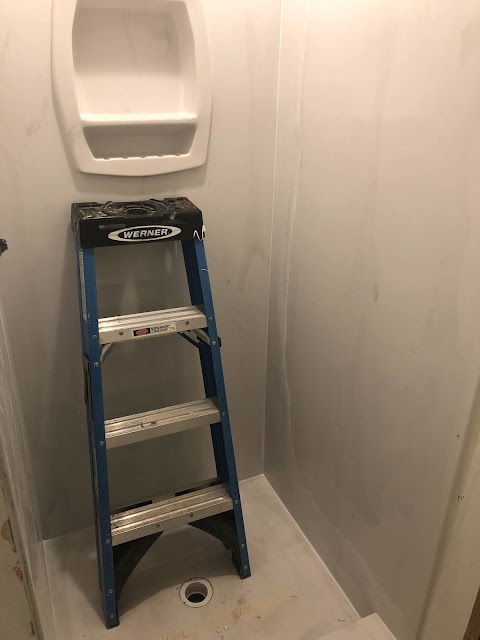 We should have probably taken a before picture, but we seem to always forget to do that (breaking news: Andrew did that, so you can see our beautiful shower below)... 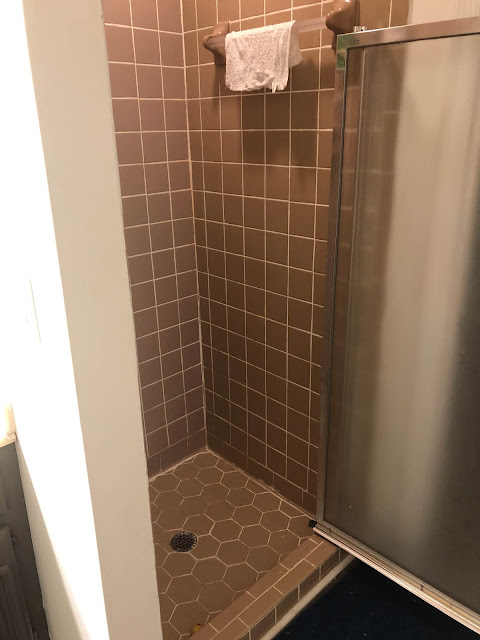 A friend of mine once said that when she takes cares of things it helps her to love them more—so when she does something to take care of her house, it ignites a new appreciation of her house, and when she does something for someone she loves, it makes her love them more. I think that might be true in some cases, but I'm not sure it's true in the case of my house. I think fixing it up makes me hate it more because it just makes me think about all the other things we still (desperately) need to fix.

I'll feel like...no matter how hard I try to take care of the house, the house will never love me back (sometimes I feel the same way about people). I don't feel like I have very high expectations for my house. I don't need marble countertops and trendy backsplashes. I just...want it to...you know...work.