We had quite an exciting week-long Valentine celebration. My sister Kelli sent a box full of crafts and treats and Grandpa sent some fun craft supplies for us as well. We've been dipping into those packages during this mostly-drizzly week; it's kept us from getting cabin fever.

Here are the kids with some little fuzz-ball critters from a craft kit Auntie K sent: 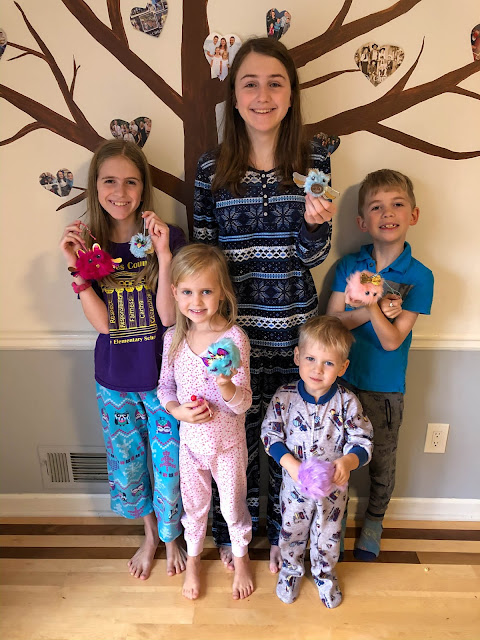 There weren't quite enough fuzz-balls to go around, but the older girls jumped right in and made some extra pompoms to use with the extra stickers. They're so great at coming up with solutions...and at being good helpers. 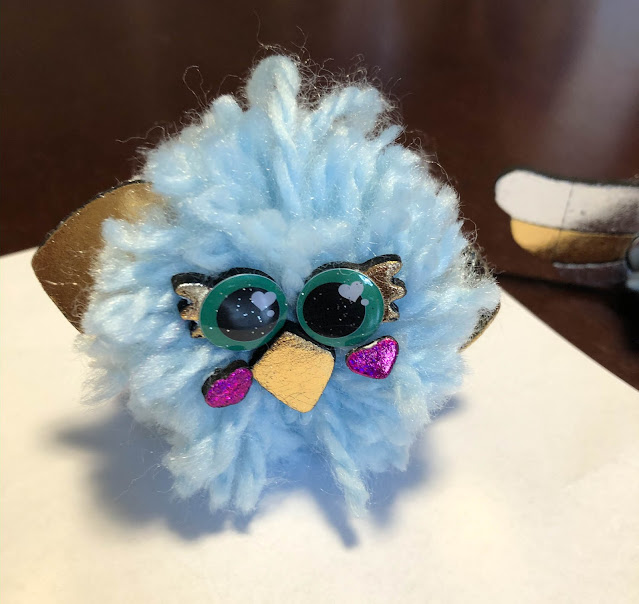 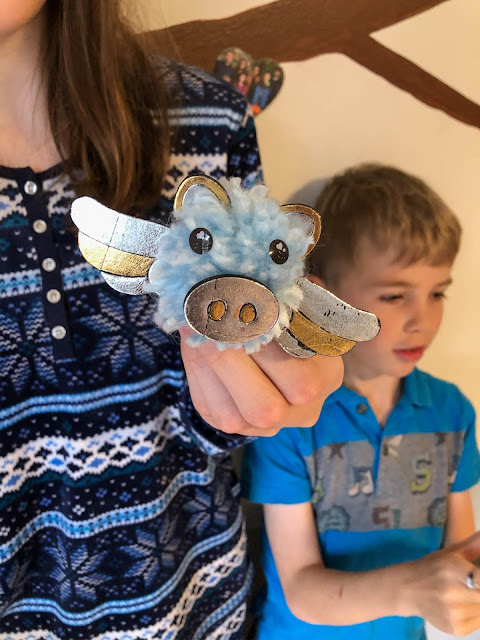 This craft was far more complicated than I thought it would be. I thought it was just going to be peeling off foam stickers and sticking them on a fuzz-ball, but it was actually foam stickers that were sticky on both sides, along with some foil sheets that you stick the stickers onto and pull off to get the colour on them and then use double-sided tape (or, in our case, hot glue (after giving up on the tape)) to stick things to the fuzz-balls. 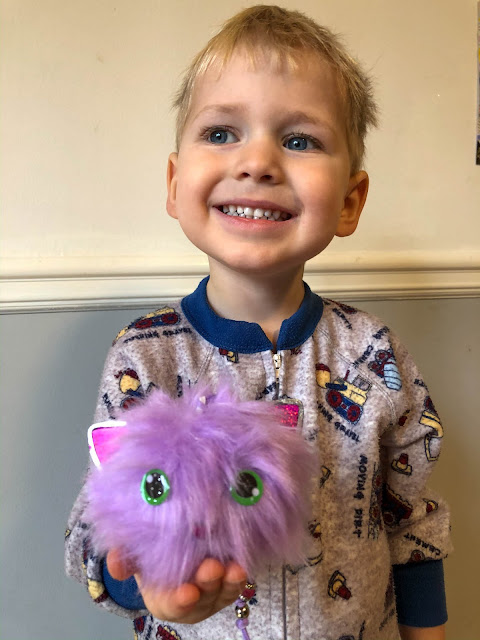 Rachel had been attempting a nice sleep-in, but we woke her up to help with all the sticker sticking and foil finagling and so forth (while we let Daddy have a nice sleep in). She and Rachel's hands were very needed to handle all the many demands Benjamin, Zoë and Alexander were issuing. 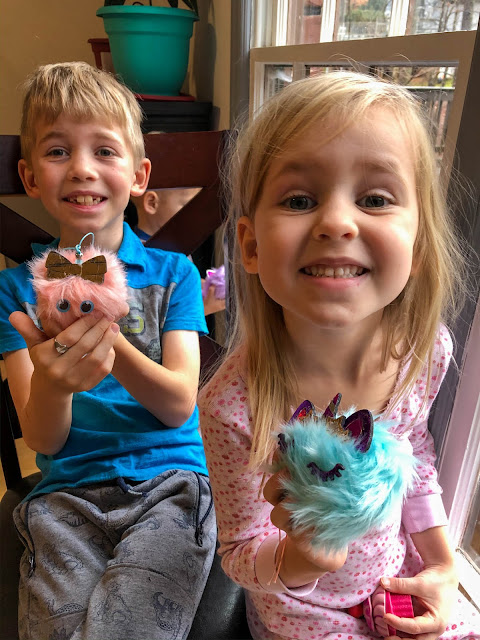 It was a very fun morning!

The primary hosted a "Valentine Voyage" on Saturday, a drive-thru Valentine party. Zoë was over-the-moon excited about the day. She wrote a long essay about it in her writing journal:

That was quite a lot of writing for her, but even as much writing as she did, she did even more talking! She had such a hard time choosing a dress that she ended up wearing a fancy dress (or full ensemble) as many days as she could manage.

Here she is with the heart-shaped bag we made together on Friday morning: 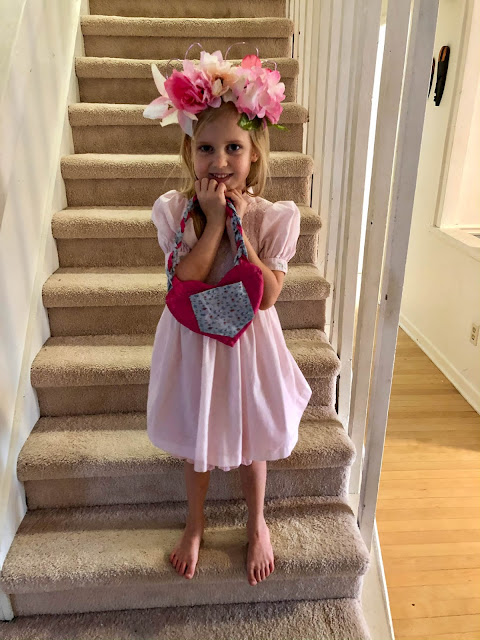 Miriam let her wear the flower crown she made at a primary activity back in Spanish Fork (it used to have Minnie Mouse ears, but Miriam bent them into heart shapes for her). Zoë loved the crown but was upset because Benjamin was supposed to make her a crown (so Miriam managed to mess up the entire storyline). We talked Zoë down from her emotional ledge and once Rachel picked out a pretty pink dress for her to wear Zoë was nothing but smiles again. 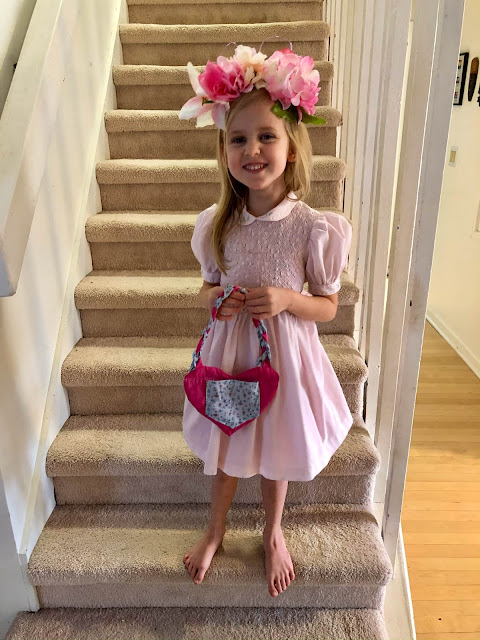 I thought she was planning to wear this outfit on Saturday (since she'd laid it out on her floor Friday evening), but instead she surprised me by showing up ready to go in this fancy number: 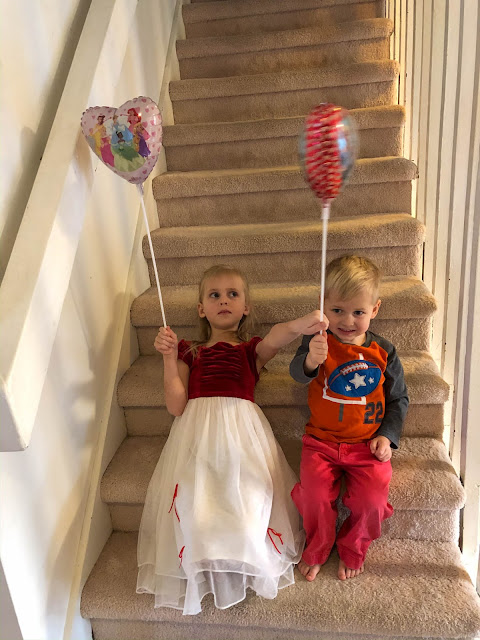 She made sure to take her heart-shaped purse (and her little fuzz-ball unicorn) to the Valentine Voyage. The kids got a little treat bag, a Lunar New Year mask, a carnation, and their pick of a mylar balloon. Zoë opted for a princess balloon. Benjamin refused, on the grounds that none of the balloons really "fit his vibe." 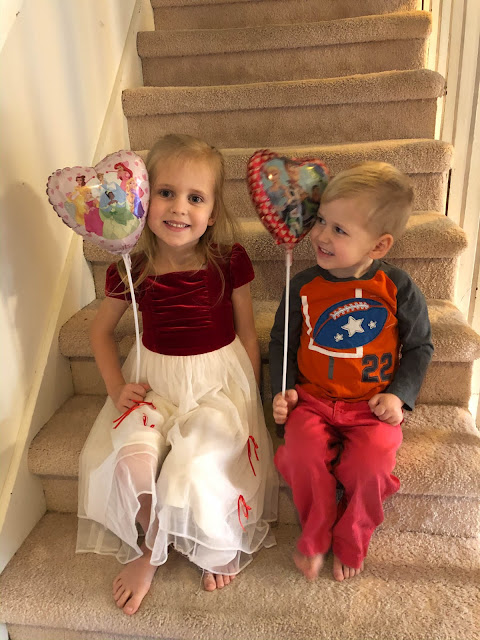 Here are the little ones working on the craft kit they got at the Valentine Voyage. 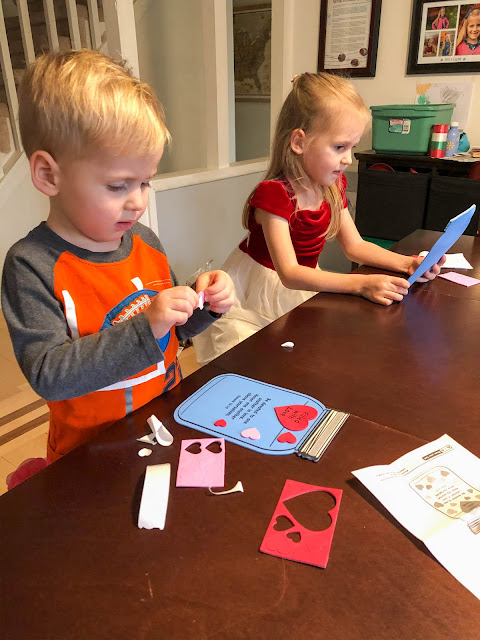 The peel-and-stick nature of this activity was a welcome respite from our more complicated fuzz-ball craft and I just let the kids go at it. 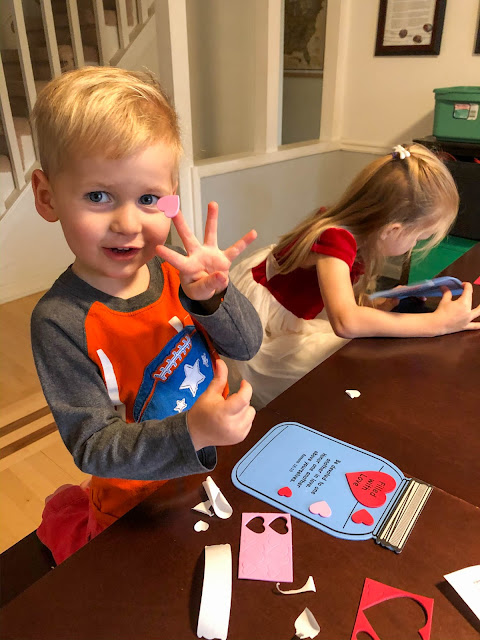 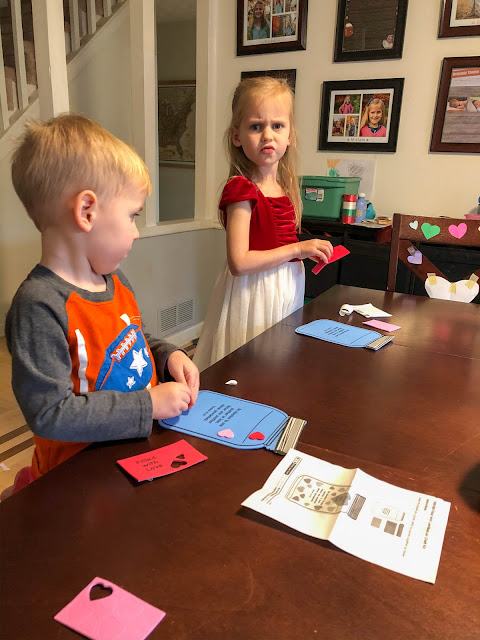 Rachel also made sugar cookies for the kids to decorate. She reserved several to practice a gradient icing and set out sprinkles and things for the littler kids to play with. 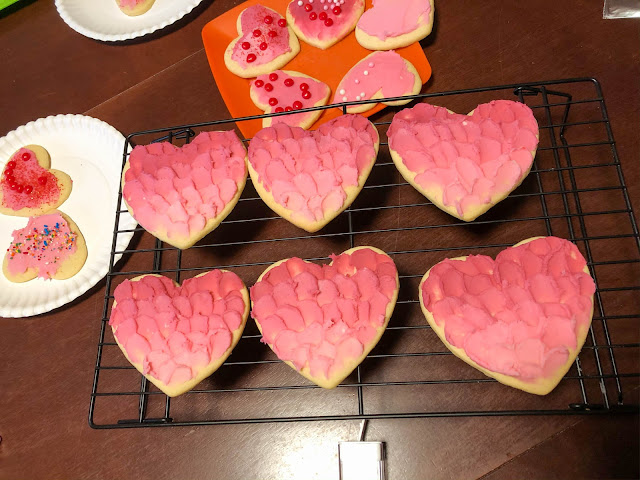 They had a lot of fun decorating (and eating) their cookies and getting a few plates ready to deliver to some neighbours. 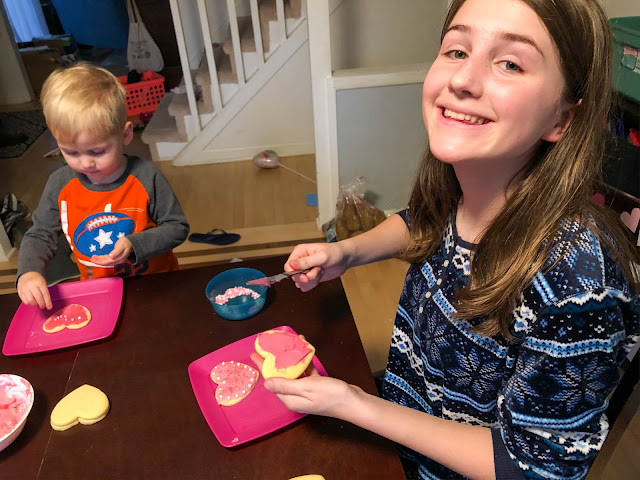 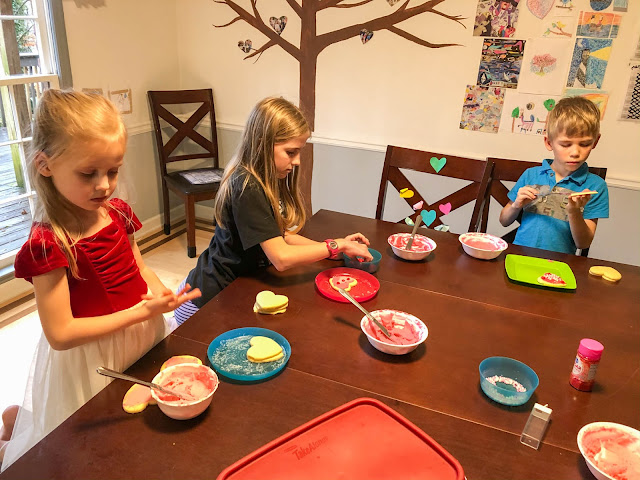 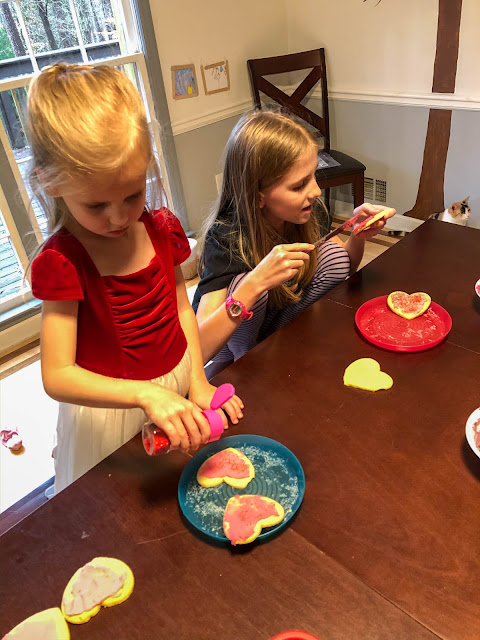 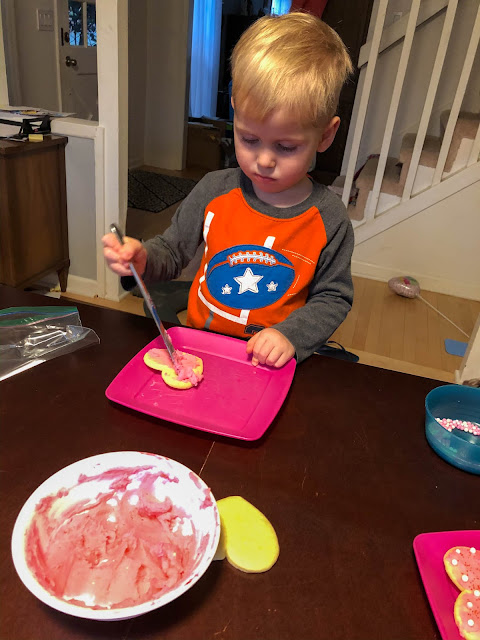 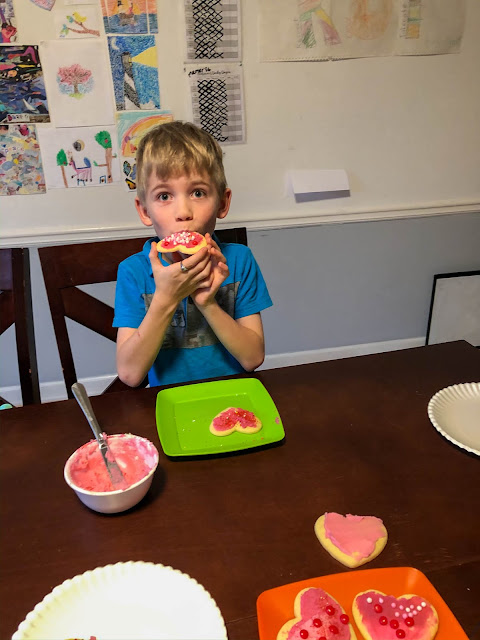 Here are a few pictures of when Alexander held me hostage outside in the rain. It was cold and wet and...a little bit muddy. But Alexander was having a lot of fun. 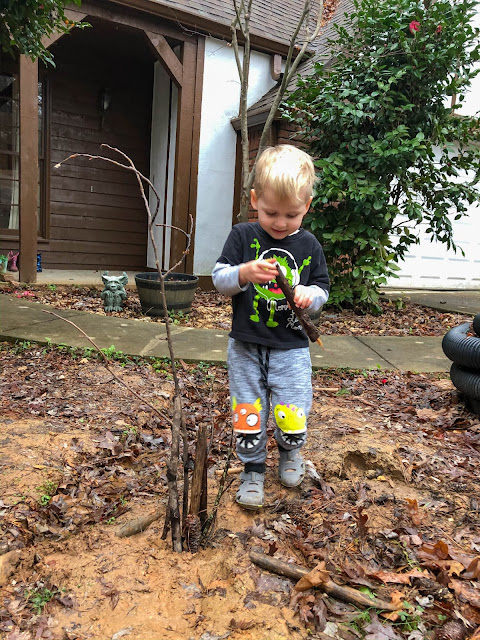 It's been interesting to see more of the inner workings of his mind, now that he's talking more. I'm pretty sure he thinks he owns me. He wants me to play with him all the time!

I will admit now to indulging a bit of an afternoon nap. It was my saving grace through all my years of night-time feedings and we only just finished with those a year ago and only just got Alexander sleeping in his own bed all night (again). Now that he's making an effort to not disturb me during the night he has really come to resent my afternoon exhaustion.

When Andrew suggested that I take a nap this afternoon, Alexander cried, "But I stayed in my bed all night! Mommy can't need a nap! She has to play with me!" 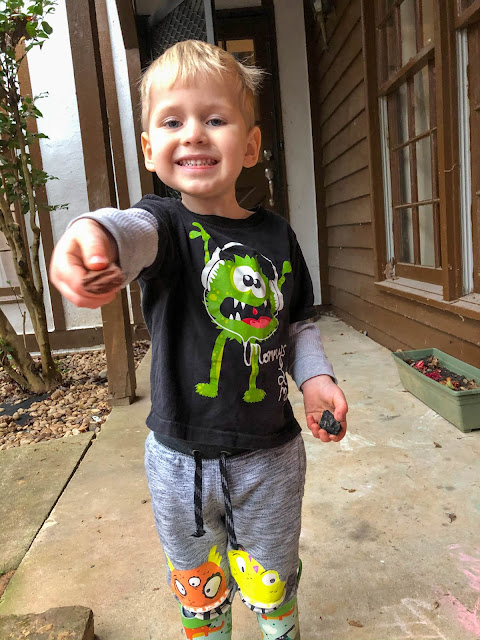 He's a bit demanding in his play. I guess it's when he feels like he's got ultimate power. He gets to be in charge of what gets built (and how) and what gets said (and when) and... He really wields his power with an iron fist. So after I got bored of sticking sticks in the mud, we found this slug and turned it into a Valentine (which made things a little more interesting): 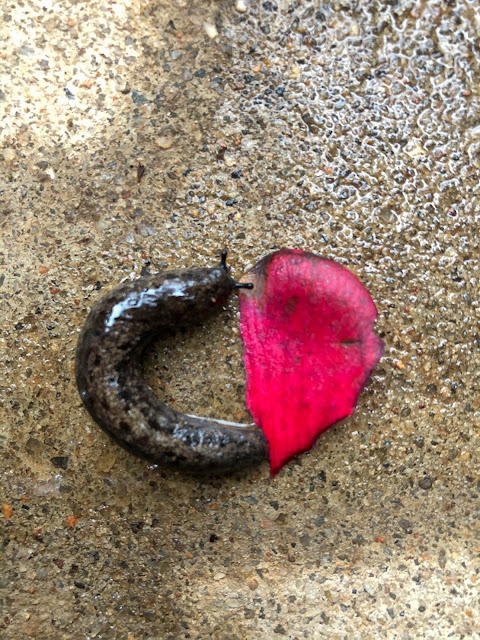 We're working on him being a little less demanding, but here are a few pictures of when he held me hostage at the kitchen table doodling in his new notebook from Grandpa: 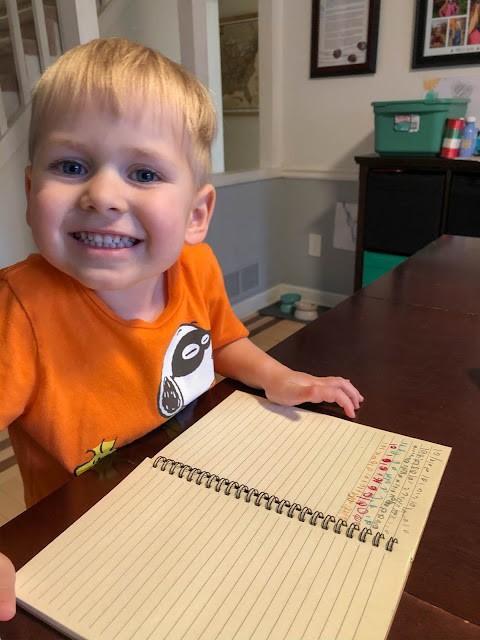 He wrote a poem in the book that says:

You can see his colour-coded writing on his page. He also drew this picture of his new notebook: 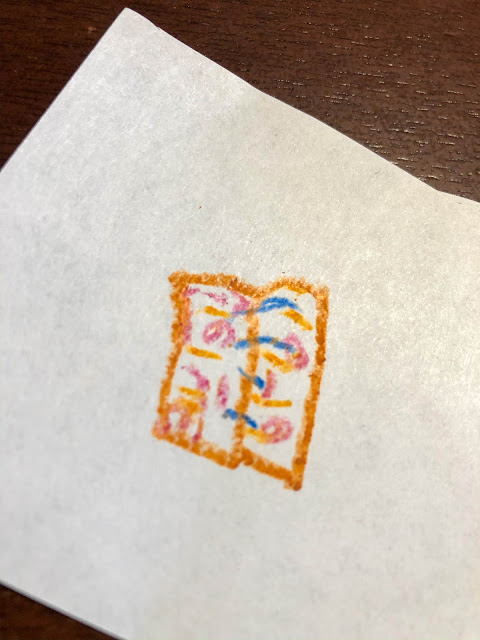 First he drew the brown cover, then he put lines on the pages, then he wrote on the pages, and finally added the coil binding. I was pretty impressed with his attention to detail. He's been working on his drawing skills a lot lately, mostly by copying Zoë's work, which certainly doesn't thrill Zoë but which has helped his artistic skills flourish. Here he is copying Zoë's heart-human: 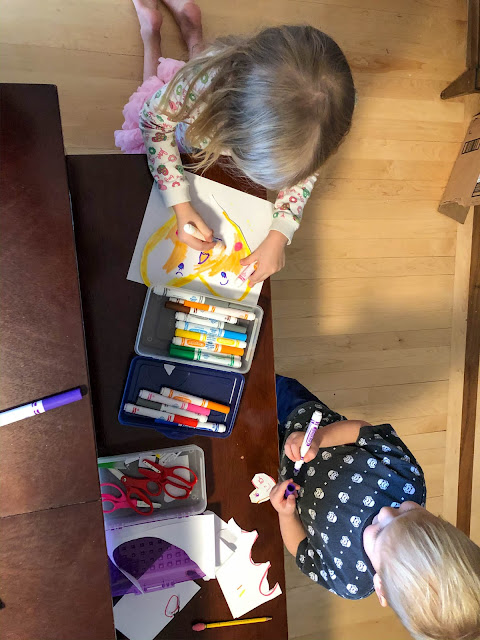 Yes, she cried about it.

Still, it's been fun to have something to look forward to the last little while. These little ones sure know how to get excited about things!