Literacy with the Littles

As promised, here are some samples of Alexander's amazing A's...

This is an earlier paper I found. You can tell because of how big the "pilot dot" is at the top of the A (and also because of how he's writing his name backwards and didn't get the X in there): 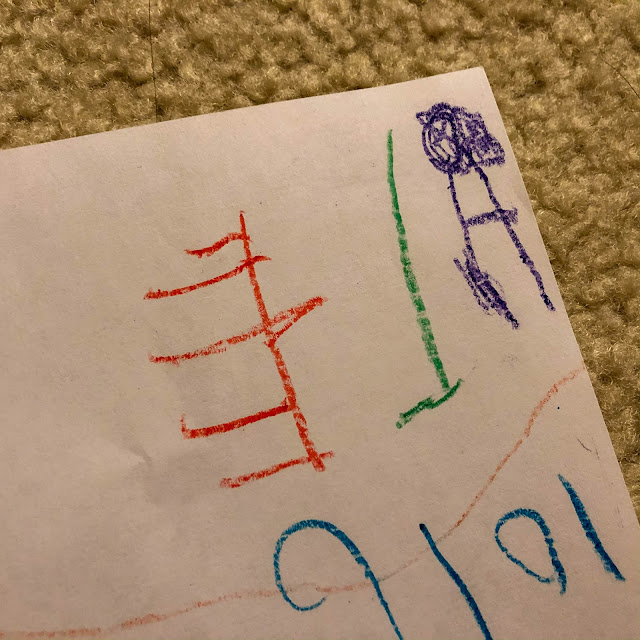 Lately he's been trying to write as small as possible. I'm really quite impressed with his fine motor skills (he can write tiny). He's also feeling anxious about learning his "long" name because he really likes writing Ns and Ms (and all the other up-down-up-down letters) and knows that he has an N in the second half of his name. 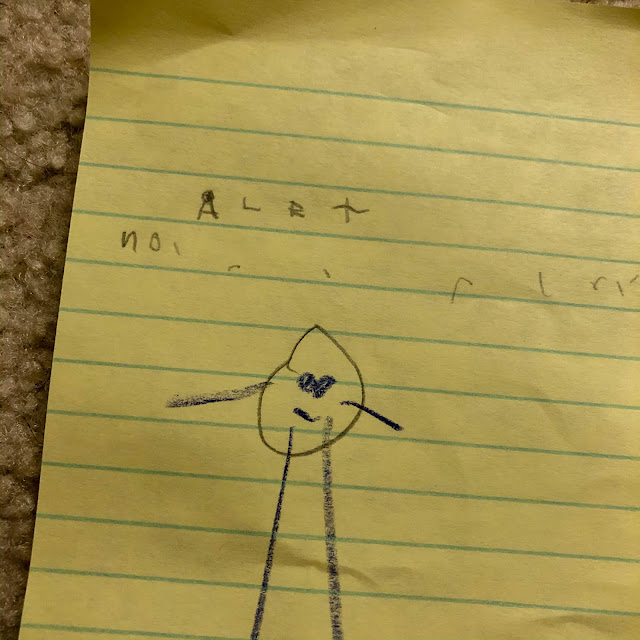 This morning the pencil Alexander was using broke so he held the lead tip in his fingers so that he could finish writing his name (using letters much bigger than when he has an entire pencil to grip). 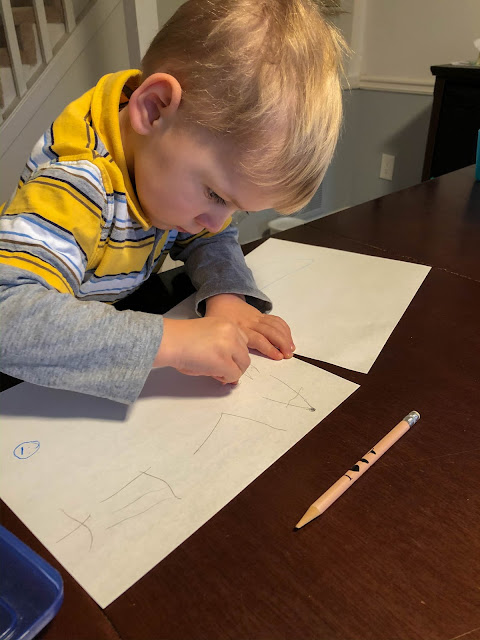 You can see his little guide dots on both his A's and he's really getting the hang of his "long" name: ALEXNADXR! For whatever reason he won't write his name in one line; he feels his short name and "long" name should be on two separate lines, no matter how much room he has on a given line. 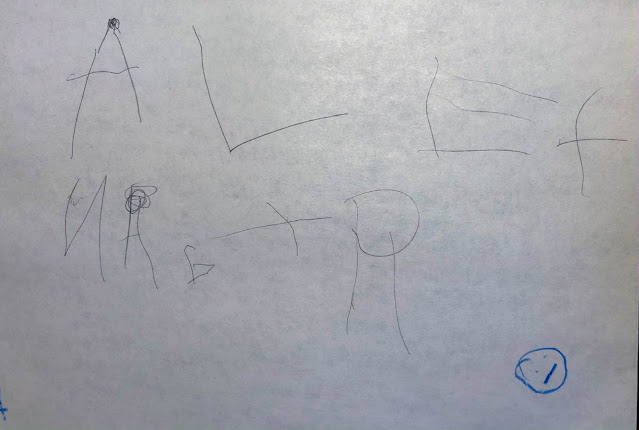 But he's learning, so that's encouraging. He drew a lovely picture of me this morning: 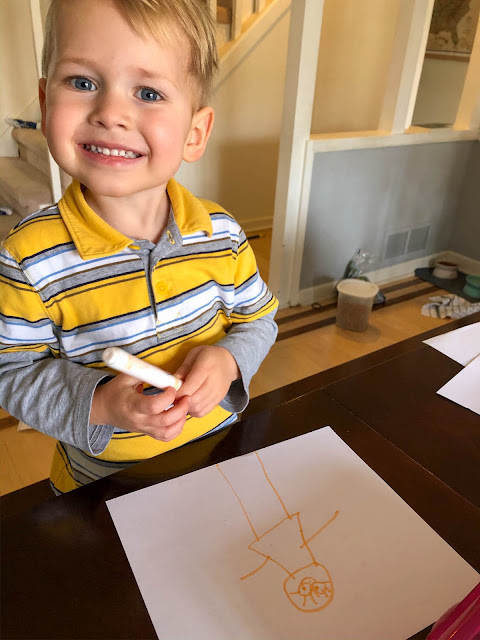 And then added himself (in the pink shirt) and some of his other siblings (in ever-deteriorating states of...development): 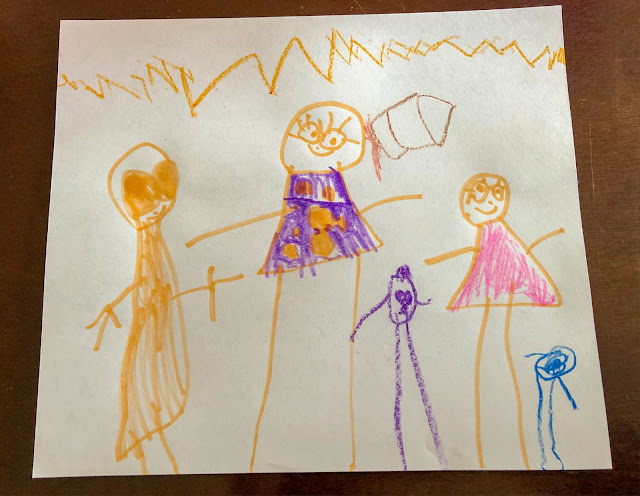 I think he ran out of mental energy to think of people as having things such as torsos and eyelashes, so those things just had to go. Heads, arms, legs are all that are truly necessary.
Here are the kids playing outside this afternoon (when things turned gorgeous again (though the morning was grey and drizzly)): 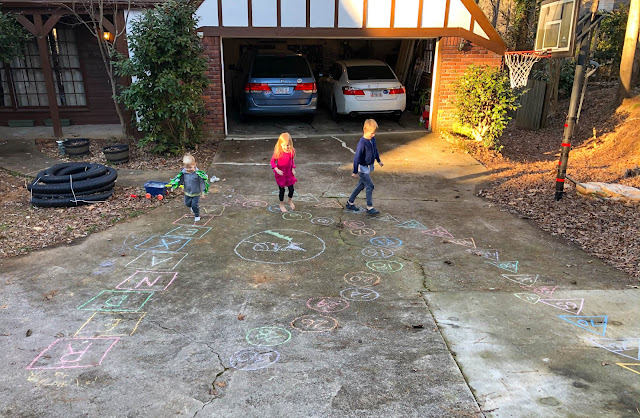 Alexander is practicing saying the letters of his name, Zoë is practicing counting by twos, and Benjamin is counting by fives (we later added eights for him).
And here is Zoë reading a story to Alexander. She struggles with silent reading, which means she's always reading out loud, and she doesn't mind at all when people stop to listen to her read. She's really quite an excellent reader, though some words still throw her off. Today she was reading a Princess in Black story and the word "massive" made her upset because there's a "Magic E" and yet...it's ma-suhv, not mas-aiv. That led us down a bit of a rabbit hole of how complicated the "Magic E" rule really is. Rules can only take you so far when there are so many exceptions... 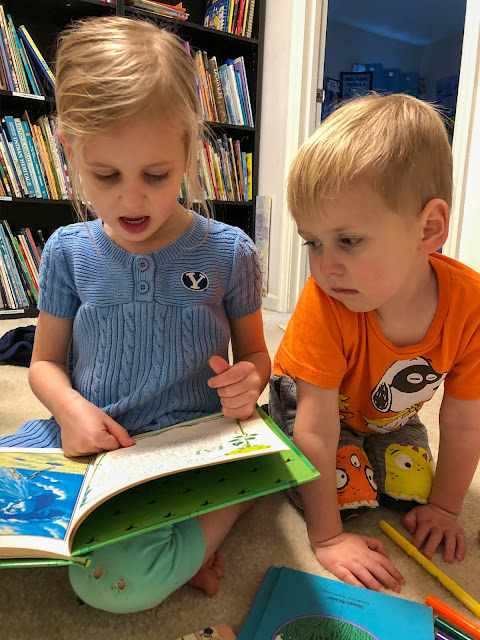 She also has been working hard to memorize the words "symmetry," which she likes to practice using every evening when she works on her mandala colouring book, and "alliteration," which she enjoys playing with in her own writing as well as identifying in the texts she reads.