In which the bathroom strongly disagrees with my opinion on adventure...

We are redoing the hallway bathroom upstairs, a rather urgent project considering the subfloor was rotten and we were at risk of falling through it at any moment. Why was the subfloor rotting? Well, because the previous owners redid the bathroom (likely a DIY(ikes) project) and when they built the shower they installed the shower pan incorrectly. Even though the shower curb is rather shallow (another error on their part), they didn't put the shower pan over the curb. They put it under the curb. So the shower had been just...leaking under the shower curb for years (at least two because that's how long we've lived here, but probably longer because they redid the bathroom before we bought the house, obviously). 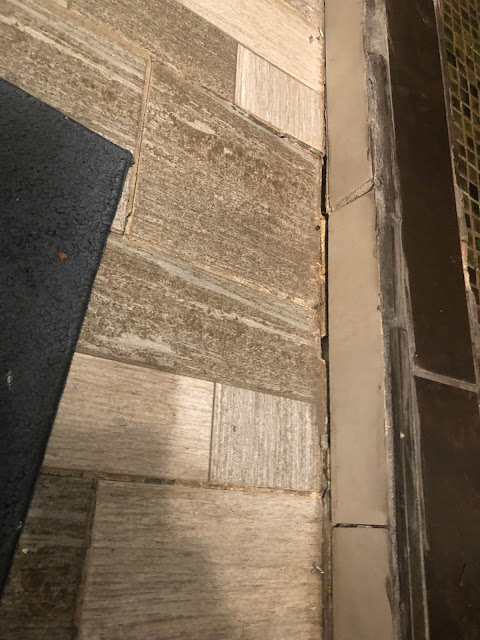 Since we knew we'd have to tear out the whole shower, as well as the redo the entire floor (and subfloor), we decided that it wouldn't cost too much extra to reroute some of the plumbing to make the bathroom make sense.

"Make it make sense!" is one of my favourite phrases, so I was all for these changes.

This bathroom made no sense. It made so little sense that we couldn't even capture how nonsensical it was on camera because it was impossible to squeeze into the bathroom to get at a good angle for a picture.

This is the view from the door, which looks fine. 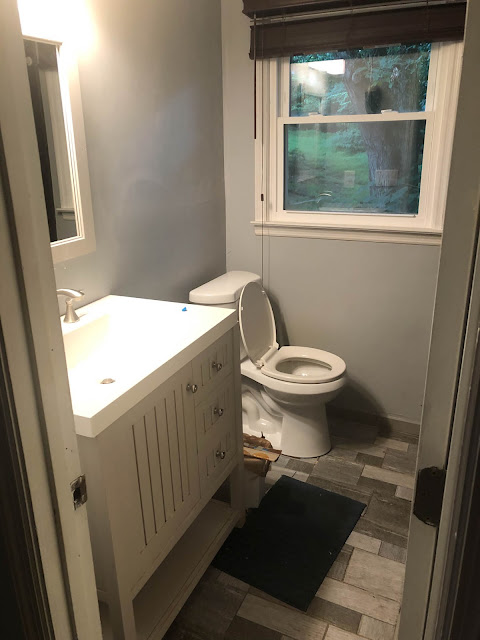 Things aren't so great on the flip side, however. They seem to have wanted the shower to be as big as possible, but not interfere with the door, so they put up this wall and left an awkward alcove behind the door: 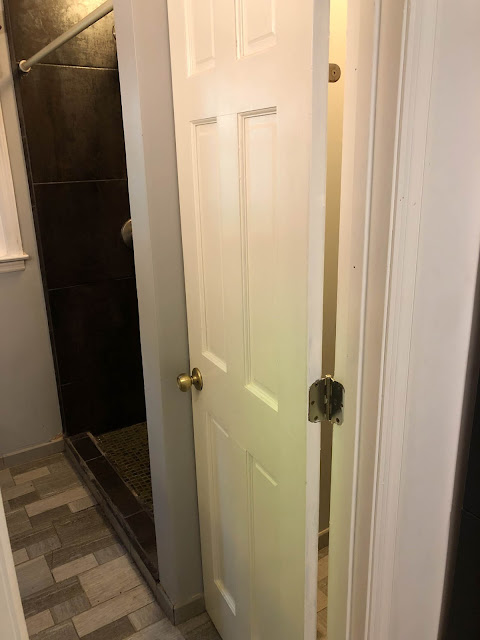 That is as far as the door opens, by the way. They didn't measure properly and so it gets stuck right there. We put a little shelf behind it to keep extra toilet paper and things of that nature. 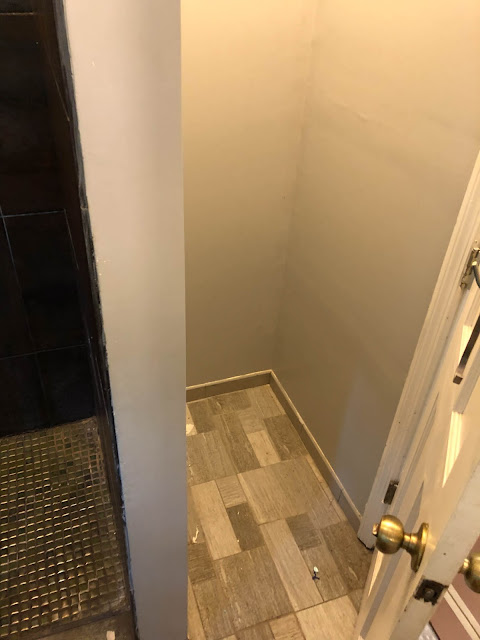 The door, for the record, also doesn't close at all. It has trouble latching. So usually it's just wide open, which is fine because usually only the kids use the bathroom and they're not going to close the door! It's less fine because there's a view straight from the front doors, up the stairs, and into the bathroom.

Here's the old alcove with our shelf still there: 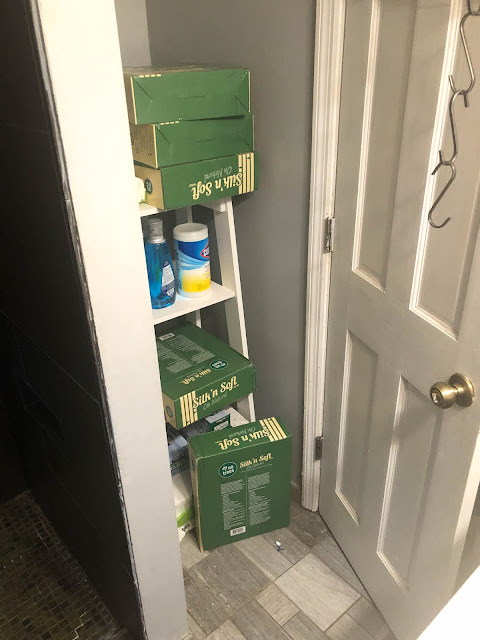 We learned, as bathroom demolition began, that the shower used to be in the alcove, but when they redid the shower they moved it to the other side of the bathroom...putting all the pipes in the outside wall (which our contractor said is somewhat of a no-no). You can see the shower handle there on the left (that's the same wall as the window). 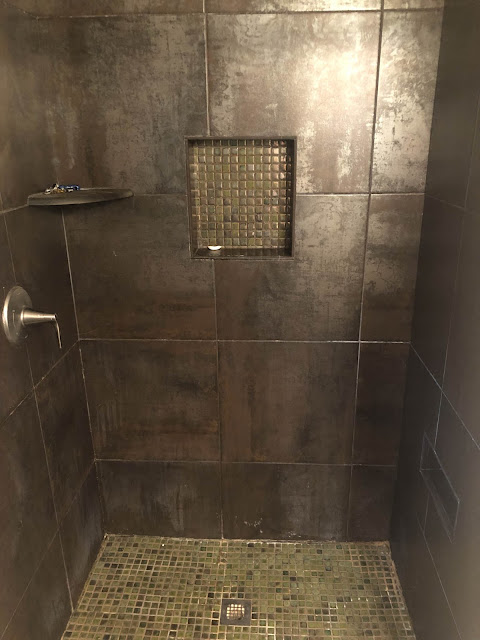 We are going to keep the shower in this corner, but will move the plumbing to an inside wall.

What other complaints do I have about this bathroom? Well...the counters are too high. Seriously, it's like up to Benjamin's armpits (he's nine years old). So we're replacing it with a double-sink, regular-height counter along this same wall. 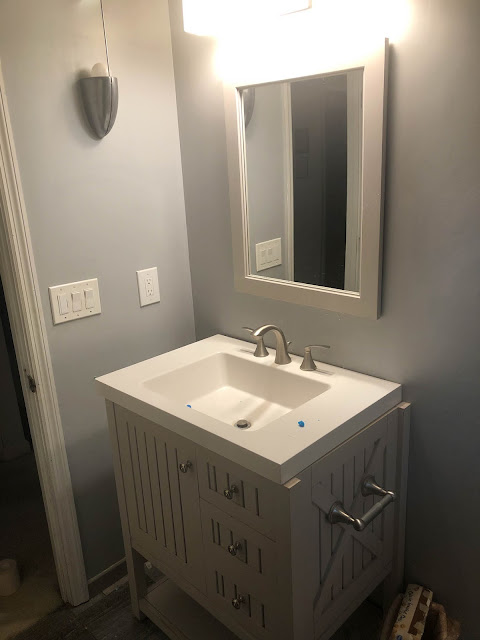 The tile. I hate it so much. It's pretty, I guess, but it's got such a deep texture that cleaning it is a nightmare. 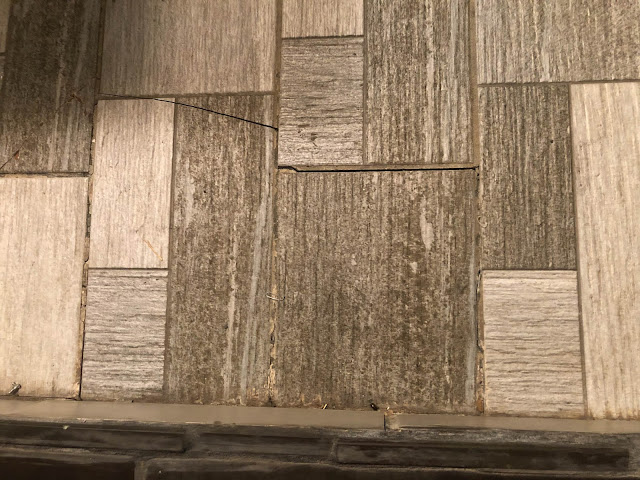 Here you can see the extra wall has been removed, so the door can open all the way! 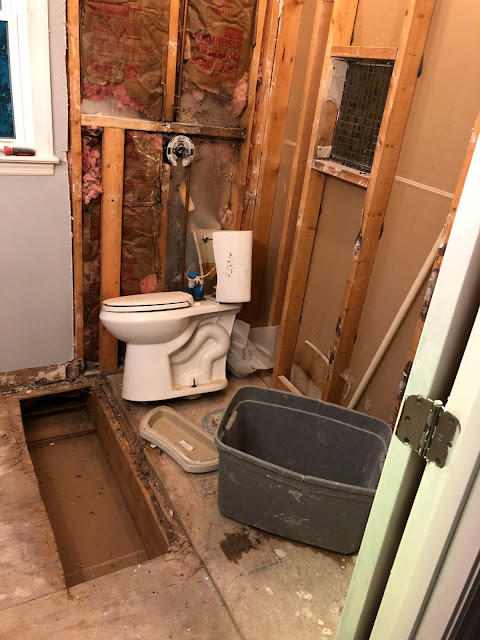 Oh, and did I mention that yesterday we couldn't use the master bathroom at all because our contractor had disconnected the plumbing for the hallway bathroom and thought our plumbing would just follow the pipes, but a lot of it started leaking through the pipe that was cut to allow our other toilet to be rerouted. (We discovered this while Andrew was on the toilet downstairs and I had taken Alexander potty in the master bathroom and let him flush; the water went right through the bathroom vent, much to Andrew's delight). 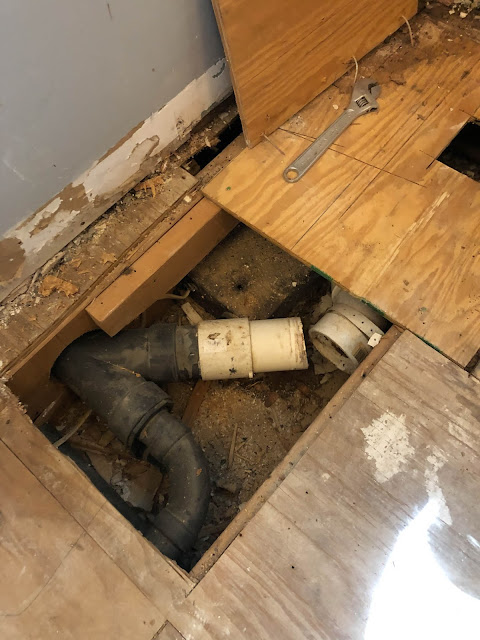 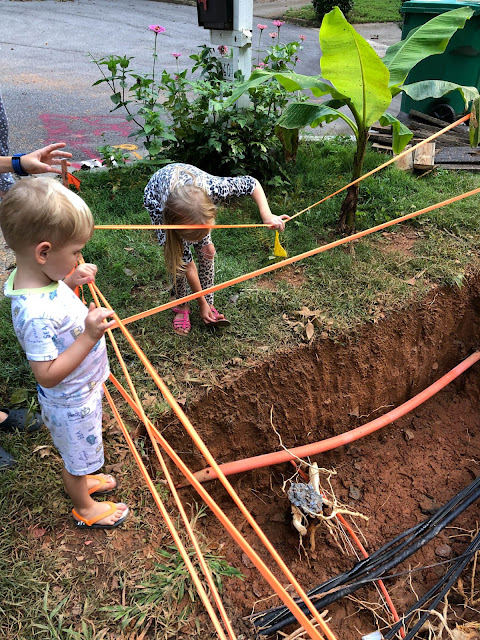 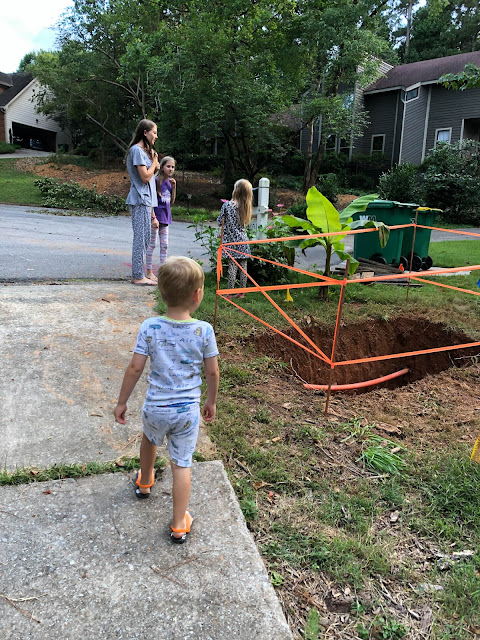 The city dug this whole so they can fix some electrical issues our neighbourhood has been having (the transformer in front of our house has blown several times over the past month).
It was a noisy, destructive Tuesday!
Today our contractor was back to finish prepping the bathroom for the plumber. While he was removing the rest of the subfloor, he accidentally cut a water pipe (an honest mistake since he thought he'd identified where all the pipes were...this one was a surprise, left over from the old shower placement (they'd removed most of the pipes leading to that corner, but evidently not all)).
I had just gone into the bathroom downstairs when I heard the contractor yelp, so I ran back out just in time for water to begin seeping through the ceiling, pouring through the bathroom vent. The contractor hustled to the basement and switched off the water main while he sorted out that little issue.

Meanwhile, the ceiling was moaning and groaning under the extra weight of the water that had just been poured into it and... 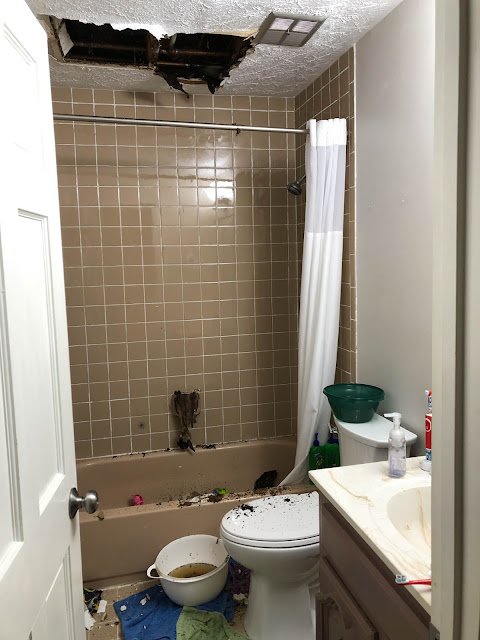 Fell into the bathroom below. 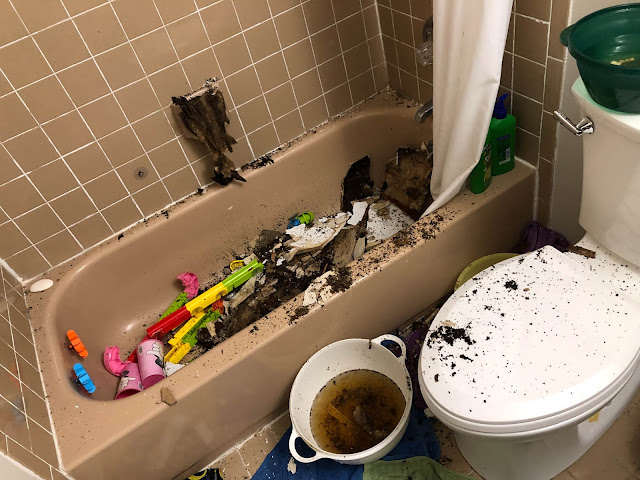 It's been an adventurous day!

My mom just asked about the "treasures" (toys) in the tub; they're in the dishwasher right now.

And the bathroom is back to its regular (relative) spick-and-span condition. I wore an N-95 mask and a pair of gloves (thanks to a global pandemic we were prepared for nasty bathroom emergencies) because...the baby. Also me. But mostly the baby. I didn't want to breathe in anything weird.

Hopefully our bathroom has got all its adventuring out of its system and the rest of the work that needs to be done will hold no surprises. Though, to be honest, I wouldn't be surprised if there were more surprises, so the real surprise would be not being surprised!

I will end this post with a funny story about Zoë, because I think it's what my mom's comment about "treasures" refers to:

On Monday we were cleaning everything out of the bathroom so that when Tom (our contractor) came on Tuesday he'd be free to just do whatever without worrying about our personal belongings. So I handed Zoë a bin and said, "Here, Zoë—go to the upstairs bathroom with this and put all your hair stuff inside."

"Because we're redoing that bathroom and Tom is coming to demolish it tomorrow."

"Okay," she said hesitantly, but she obediently took that bucket and went upstairs to do as she'd been told.

I thought it was a perfectly informative answer to her question, but I guess she has been out of the loop on the whole bathroom renovation because Andrew found her upstairs in the bathroom, sobbing as she emptied her hair stuff drawer into the bin I'd given her.

"I just don't understand why Tom's going to destroy all my hair stuff!" she wailed.

(We didn't realize we should have cleaned up all our "treasures" in the bathroom below as well!)