The weather is getting cooler, which means our pool days are rapidly coming to a close. Today I asked the kids if they wanted to go to the pool but it was only in the 70s so they opted not to. It's an understandable decision but it does make me long for just a few more summer days (which I think we'll get next week, if we're lucky).

I was especially grateful for the pool yesterday when I was in such intense pain that I could hardly walk. My lower back and my hips and my pelvis were all so sore! Being in the pool took all the weight off my poor joints and I was able to walk around a bit. I was worried that this was just what the third trimester of a geriatric pregnancy was going to feel like, but I think what really happened was that I just overdid things on the exercise bike Wednesday evening.

My one synchronous (but still online) class meets Wednesdays at 5:30, but I have to eat dinner by 5:00, but then I also have to exercise, so in an effort to cram in enough exercise I put the tension on the exercise bike a little higher than I usually do and...I think that was a bad idea.

I'm feeling much better today, with just the regular discomforts of pregnancy rather than hardly being able to move. I was wondering how I'd even survive the next couple of months without the pool, but as it turns out, I think I'll manage. Still, I'm a little sad to say goodbye to the pool.

Anyway, here are the kids resting on the side of the pool: 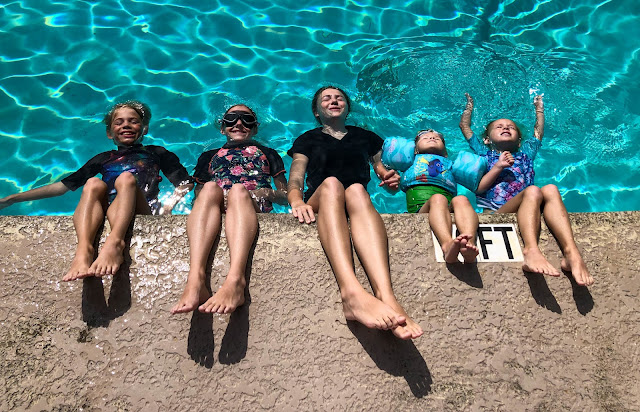 This is their "bat pose"; they will sink their torsos so their backs rest against the wall of the pool (and they're completely upside down). All except Alexander, who simply thinks he does this.
Benjamin got over the "yips," so here are some videos of the kids attempting their sequential diving routine:

And here's Rachel doing a flip off the board (like a pro):
She screamed like that every time she did a flip off the board and it was hilarious.
I can't promise that these will be the last diving videos from this season because Zoë was doing some phenomenal dives off the diving board when we were at the pool yesterday. Unfortunately, I was too hobbled to bother getting out of the pool to take a video of her (I could have lived in the pool yesterday; I was in pain to the point of tears the entire day and it felt so nice to have the water carry this baby around for awhile instead of making my hips do that job).
Posted by Nancy at 9:57 PM