We only "ate out" twice the entire time we were gone (it's amazing how many times you can fill tummies with PB&J, honestly (or dishonestly sometimes, too...because we forgot to buy jam and only realized it when we were getting ready to head to the beach on Tuesday morning so we sent Zoë and Miriam back down to the breakfast bar to grab a few little tubs of jam...which...I mean...we bought a little jar of jam for Thursday...). Wednesday evening was one of those two times because there was a Cook Out right across the street from our hotel!

We like Cook Out, but there isn't really one close to our house.

Anyway, this Cook Out meal was a little disappointing because (a) their milkshake machine was broken, which meant no milkshakes (I'm trying to be a good pregnant lady and not eat a lot of sweets because I just know I'm going to be diagnosed with gestational diabetes any day now so this was probably good for me, but was disappointing for everyone else) and (b) they forgot to put any sauce in our order and Andrew forgot to ask. So we just ate...plain hush puppies and plain chicken strips.

"We will find dessert!" Andrew promised the kids.

So we drove downtown, parked, and started walking toward Broughton Street. 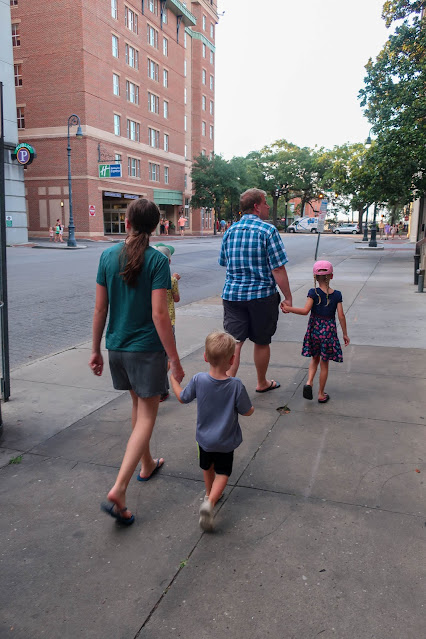 When we got to Leopold's there was a line of potential customers snaking down the block, so we decided to pass that ice cream place up and find another one. Ice cream is pretty much ice cream, right?

(And we're trying to avoid crowds these days).

So we headed down to River Street (not a good place to avoid crowds, honestly). The cobblestones of the street come from all over the world; they're ballast collected from ships that came to port (they'd ditch the ballast as they collected the goods they'd come for). It was a beautiful walk, despite the crowds. 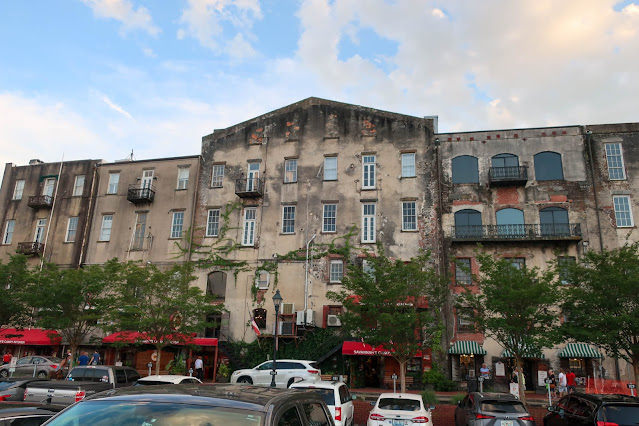 Here we are at the Savannah River, where we were treated to another stunning sunset: 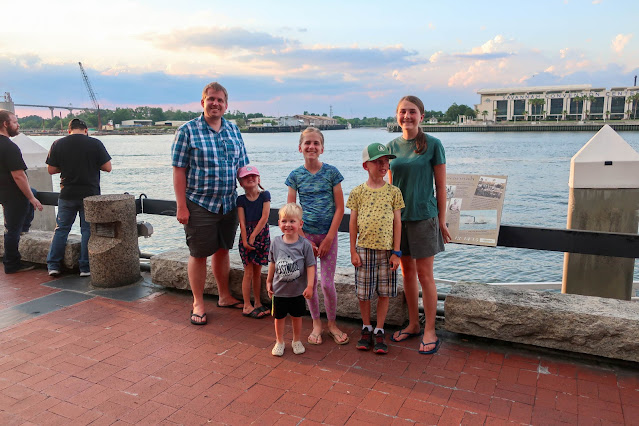 Zoë is wearing her hat in this one picture, so I'll talk about that for a minute. It's her little souvenir from Tybee Island! That and the shoes she's wearing!
The kids were so excited about this trip (we haven't gone anywhere in so long) that they packed on Thursday or Friday last week (or something ridiculous like that). I did make up a packing list for them to follow but, naturally, complete and utter chaos reigned while they more (or less) followed the list. Zoë chose a pair of sandals, it's true, but she chose a pair of dainty dress sandals (the kind a little girl might wear to church on Sunday, not the kind a little girl would wear to play at the beach), but I didn't realize this until we were already at Tybee Island on Tuesday evening, having driven five hours...
So on Wednesday morning we stopped by a little surf shop to pick up some more appropriate footwear for her. Andrew ran in and bought a pair and...she hated them (and...they honestly were an abomination so I don't blame her). There was no way she was going to be caught dead in such footwear. So Andrew went back in to return them (literally two minutes after leaving the store) but apparently they have a strict "no returns" policy and only do exchanges. So he hunted around and found a pair of slide-on sandals that he thought she would like (and, boy, does she ever!), but they were considerably less expensive than the original croc-style shoes that he'd found. And that's how Zoë scored her new Tybee Island hat (which she also loves). It made up the difference of whatever amount Andrew had "promised" the store when he bought the terrible, horrible, no-good, very-bad shoes.
Anyway, the river was beautiful and the sunset was beautiful (and I think this group of people is beautiful, too): 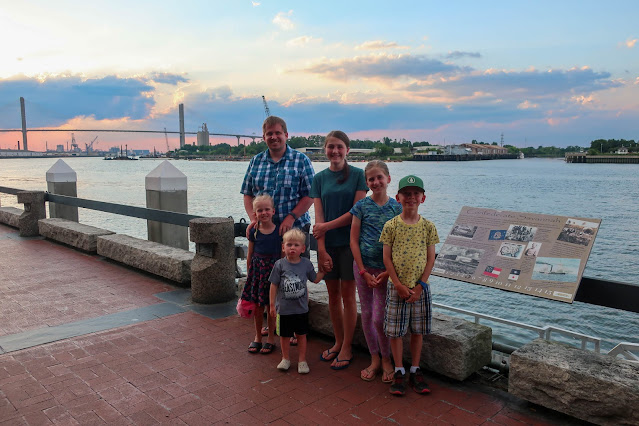 We walked and walked and walked along the river until we found the statue of the waving girl, Florence Martus, who waved at every ship that passed through the port for 44 long years. And then we walked back along the river, looking for an ice cream shop. But not without taking several pictures.
Rachel was slightly aghast to realize that she and I were a little matchy-matchy, but she agreed to take a picture with my by the river: 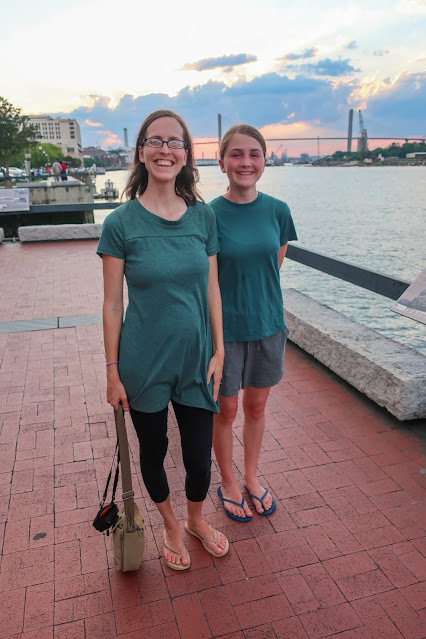 And here we are just enjoying the last bit of sunshine for the day: 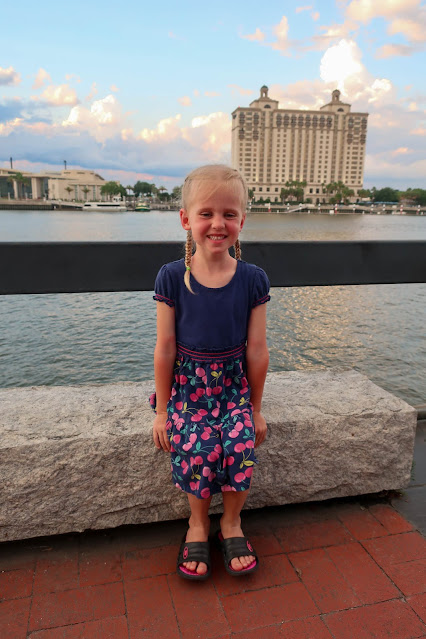 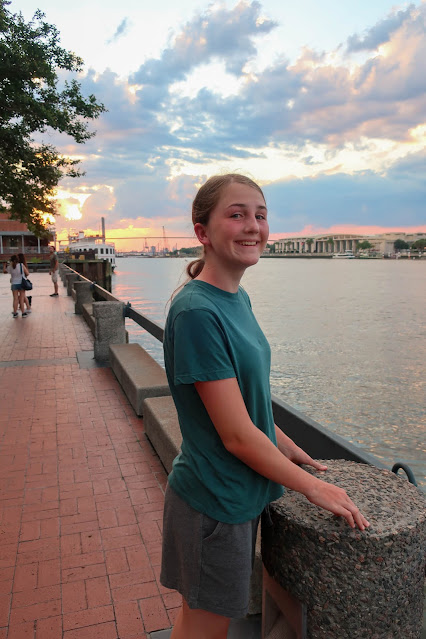 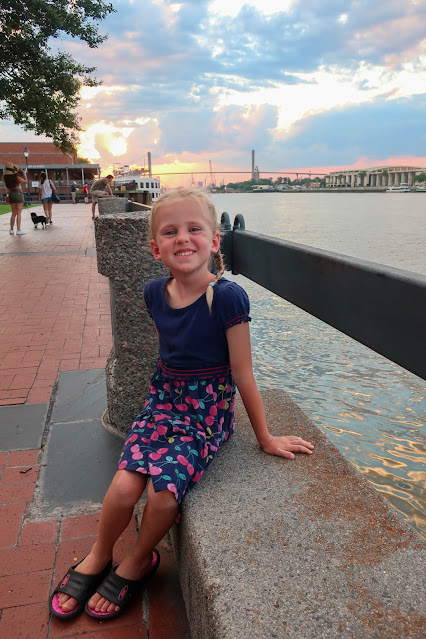 Zoë thinks these new shoes and this dress (that she didn't like when she was five, but which she likes now that she's six...perhaps because it matches the shoes so well) make a fabulous outfit. So be prepared to see a repeat of this outfit on Thursday and Friday's dry-land activities because she refused to wear anything else (the rest of the clothes she packed lay neglected in her bag). 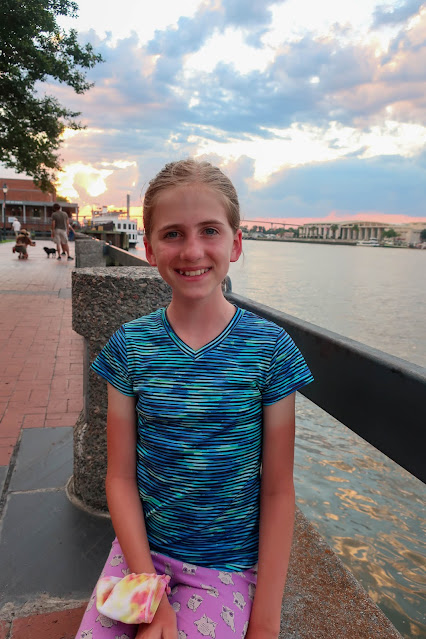 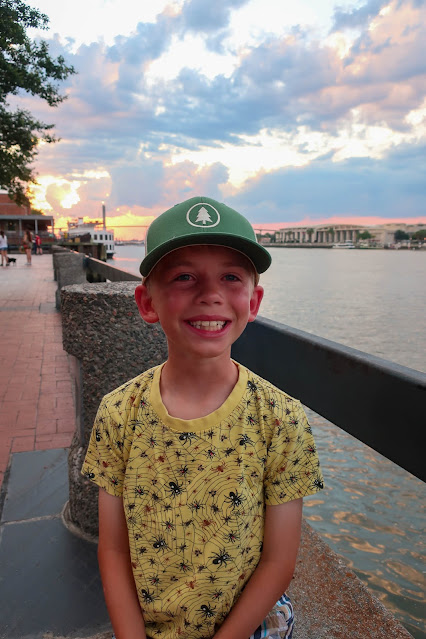 Alexander, no longer our "tiny boy," but our great "medium boy," sure was a "daddy's boy" this particular evening (probably because Daddy would agree to carry him when his legs got too tired while Mommy would only hold his hand): 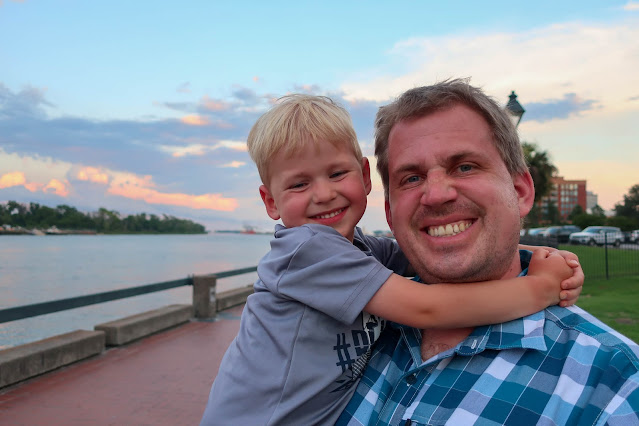 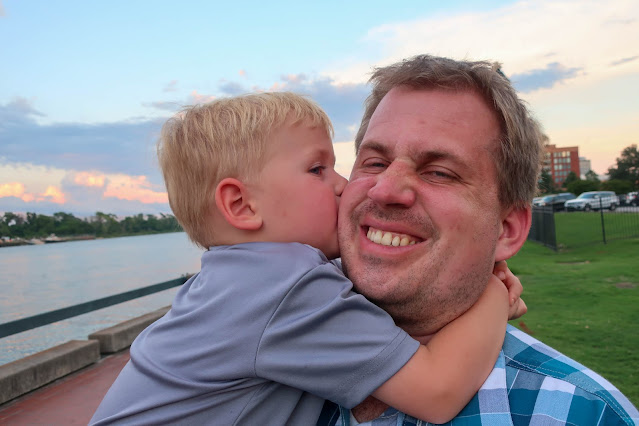 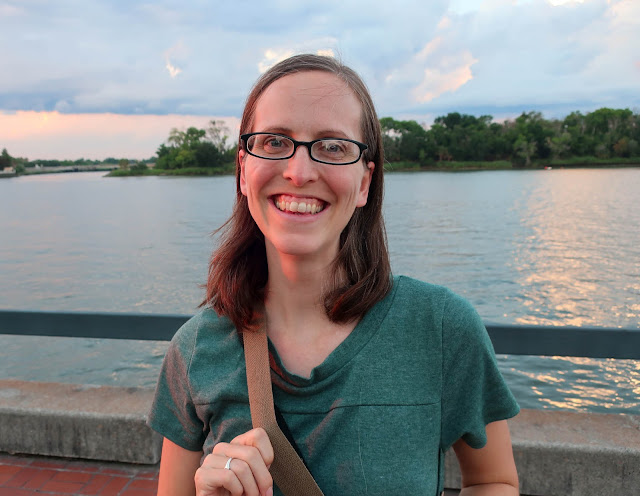 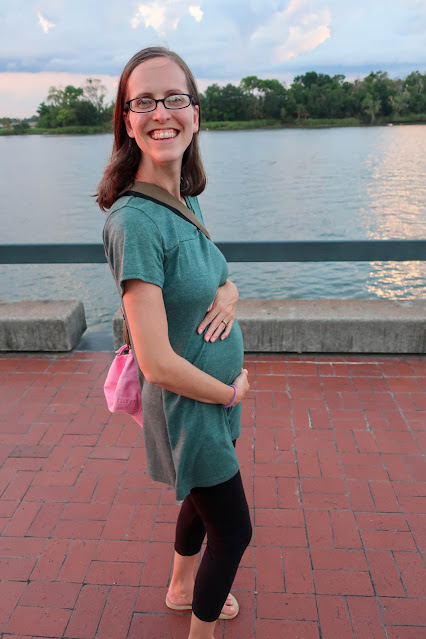 And here are all the kids together (aside from baby #6, naturally) and looking fabulous: 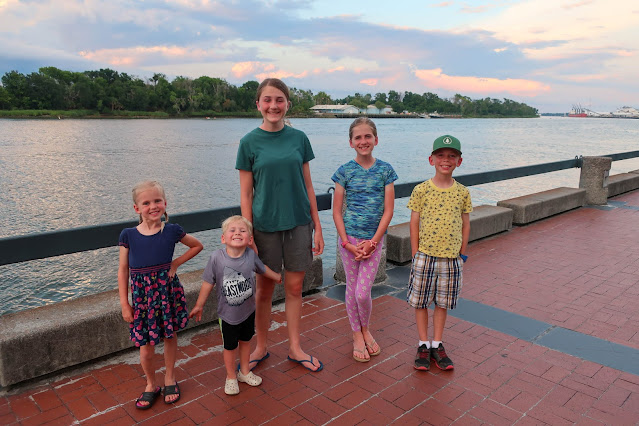 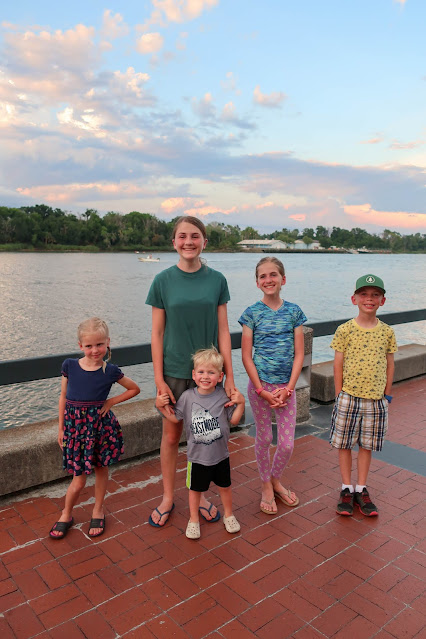 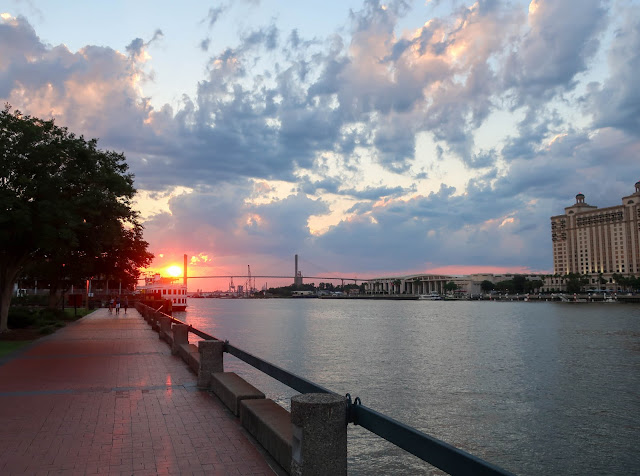 And here's everybody (except for me (and baby #6), naturally) walking along River Street itself (it's open to vehicular traffic, but is largely very pedestrian friendly, so...yes...we're in the middle of the street): 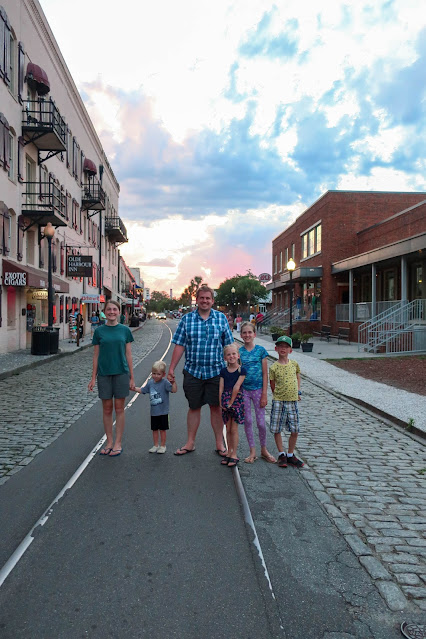 Just when we were giving up hope of ever finding an ice cream shop, we finally spotted one (I can't remember what it was called, but they sold popcorn and ice cream and candy), and headed inside (with masks) to pick our flavours. By the time we got outside and found a place to sit, things were getting a little drippy, but we had some very satisfied customers! 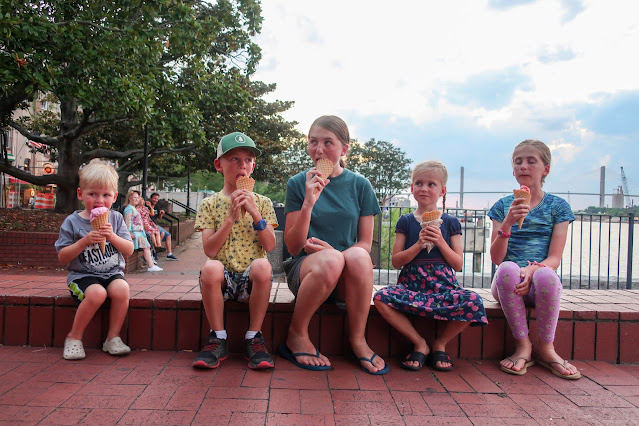 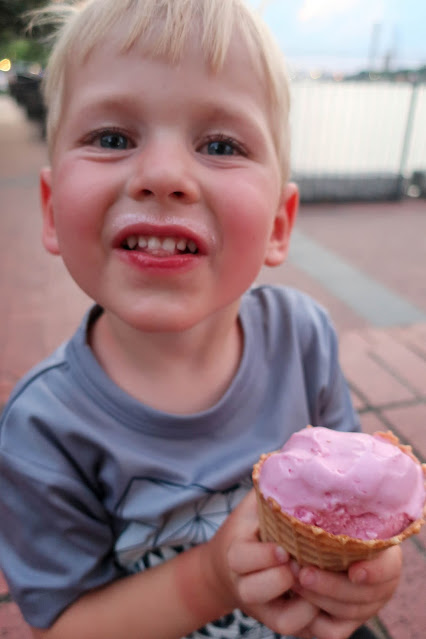 Oh. And Alexander's poor little wrists. You guys!
I slathered that child with sunscreen every hour we were at the beach. But he was wearing a long-sleeve rash/sun guard and I completely forgot he had hands! So his wee little hands got a little bit sunburned, poor thing.
But the rest of his body is fine—his neck, his legs, his face? All fine.
And we gave him ice cream. So...we can't be too terrible of parents.
Here he is goofing off with the last bit of his ice cream cone (which he had a little bit of help eating because it was a lot for a little guy). He is such a happy little boy! 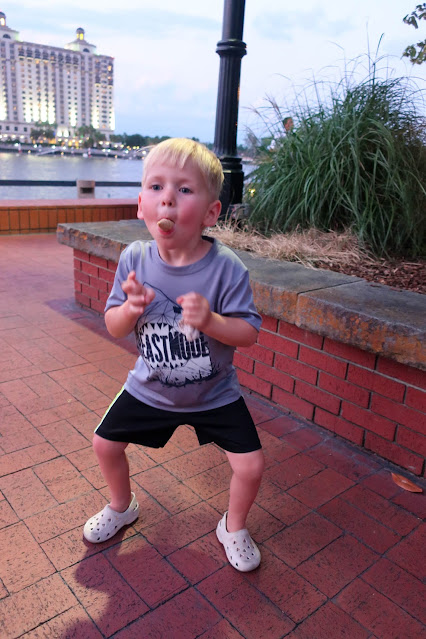 We were so impressed with his attitude the entire trip (today on the long drive home, for example, he hardly complained about anything and just sang songs to himself (nursery rhymes, primary songs, Daniel Tiger songs)...for five hours). He's a little sweetheart!
After we finished our ice cream we had to watch a big paddle boat come by (it was very exciting)... 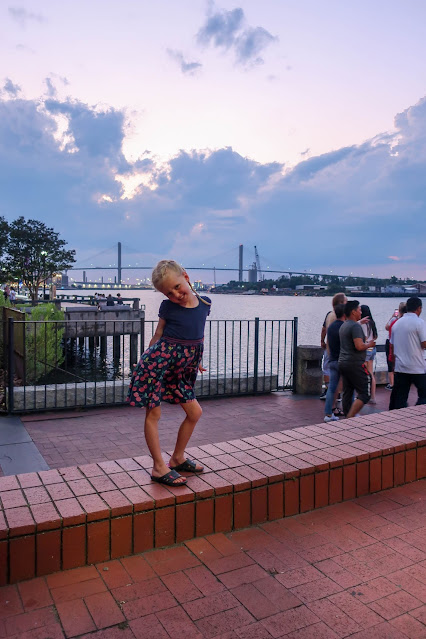 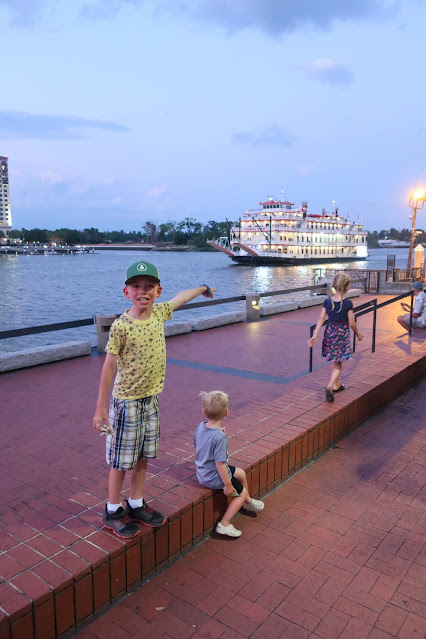 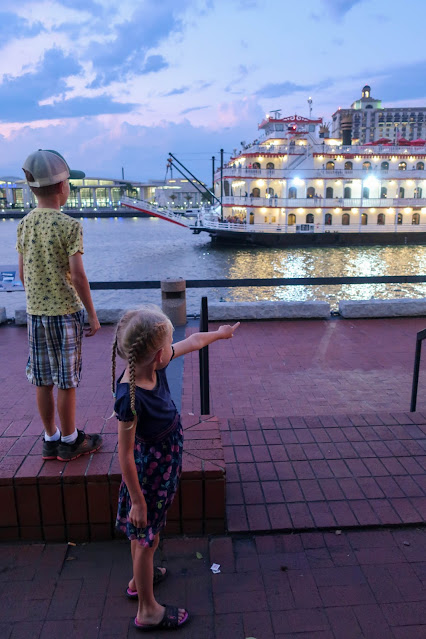 ...and then we headed back to find the car, so we could drive back to the hotel, and put our poor exhausted selves to bed. 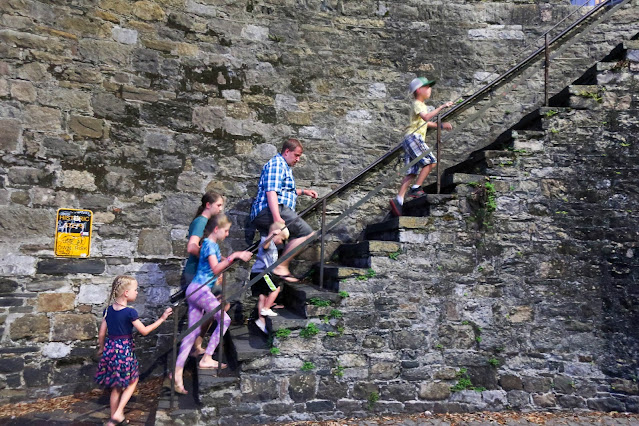 I don't quite remember where the parking garage was, but I know that we passed the John Wesley memorial and the Savannah Taphouse. The Savannah Taphouse appears to be a repurposed movie theatre. It has all those lightbulbs flashing around its sign (you know, like a movie theatre). It looked very fancy and Rachel said something like, "Oooh, a taphouse. That looks fun!"
And I didn't correct her right away because we were trying to figure out where our vehicle was, and make sure small children didn't dart into the street and...anyway...the next day is when I finally had the chance to clarify for her what a taphouse is.
"So Rachel," I said. "That taphouse last night..."
"Yeah!" she said. "What a cool place! They must do all sorts of shows..."
"I'm sure they do do shows," I agreed. "But I think you should understand that a taphouse is, like, a bar."
"What?!" she said. "It's not...like...a dance studio?!"
"No. It's...a bar."
"But...tap...house..."
"Right," Andrew explained in the naive way that only a teetotaler can. "So, sometimes alcohol comes in big kegs, you know? Like those big barrels you saw on stage during Hamilton, for example. Well, to get the alcohol out of them, there's a...sort of tap...that you put on the barrel and then you can open it and let the liquid flow out and close it to save for later. Like a water cooler. But for alcohol. So that's why it's called a...taphouse."
We joked about her misunderstanding all morning yesterday. It was hilarious.
"But it looked so warm and inviting..." she said.
"Can places of ill-repute not look warm and inviting?" Andrew asked in an aristocratic manner (his use of the phrase "ill-repute" was entirely sarcastic, I assure you).
Anyway, it was a fun little educational moment for her.
And here are Alexander and Zoë tucked in for the night (but not sleeping yet; just pretending): 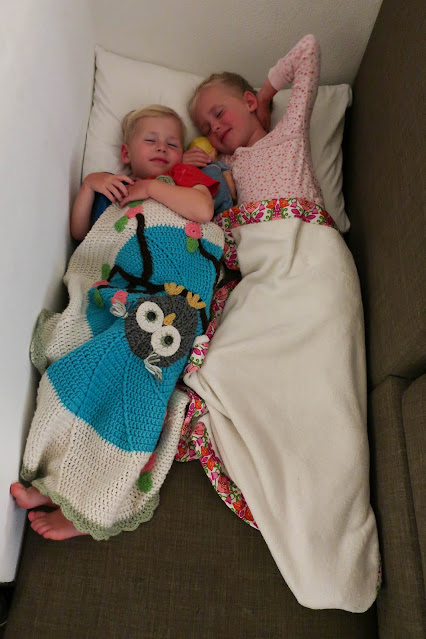 Our hotel was a little more cramped and...dumpy...than it appeared to be online (you get what you pay for, I guess). Half the amenities they claimed to have were broken. The pool, for example, was closed. And although our room advertised two queen-sized beds and a fold-out couch, what we found were two full-sized beds and a fold-out couch that was broken (with a sign on it saying that if we opened it they would charge us $200). So that was a little disappointing, but we made it work.
Oh, and we had to switch rooms, too, because the first room we were in (that still had two full-size beds and a broken pull-out bed) had a door that you had to fight with to close. Like, the latch had been completely broken and then rigged to "fix it" but it wasn't really fixed.
So they moved us to another room, which was the same, but with a door that actually latched (something I find important for some reason). Unfortunately, while the first room had a pull-out bed that still had a mattress in it (so that while we might not have been able to pull out the bed we at least had a functional couch), the second room's pull-out bed had no mattress in it at all, rendering the couch rather unusable because nothing was really supporting the cushions.
The first night all three girls shared a bed (which they said was awful), Alexander slept on the little wing of the L-shaped couch that was solid enough to support a body, and we took the cushions off the pull-out bed section and put them on the floor for Benjamin. But the second and third nights we put Zoë and Alexander on the floor together, Benjamin on the usable section of the couch, and Rachel and Miriam had the full bed to themselves (while Andrew and I took the other one). This was a much better arrangement because three people in a full-sized bed is just a tad squishy and Zoë and Alexander are both extreme cuddlers...so why not just put them together, right?
It worked out alright and we didn't spend a lot of time in the hotel, anyway.
Posted by Nancy at 12:45 AM