Now that the kids are vaccinated (for the most part), we're starting to experiment with taking them out in public a little bit more so I actually let the kids come inside the library with me...well, three of the kids. Miriam, Benjamin, and Zoë came inside the library with me (I needed them to help me carry books, anyway) while Rachel sat in the van with Phoebe and Alexander (don't worry: the weather is perfect for sitting in the van and Rachel is 100% capable of unbuckling and removing the children from their car seats (and the vehicle) and walking them into the library, should the need arise).

Here's Benjamin putting the library books into alphabetical order for me so that we can cross-reference them with our library list to make sure we are returning everything we've borrowed. Zoë is sitting in the background holding Phoebe and fruitlessly trying to convince Benjamin that you just ignore the "the's" in titles and alphabetize by the next word (but he ignored her advice so had to re-alphabetize when he was finished) : 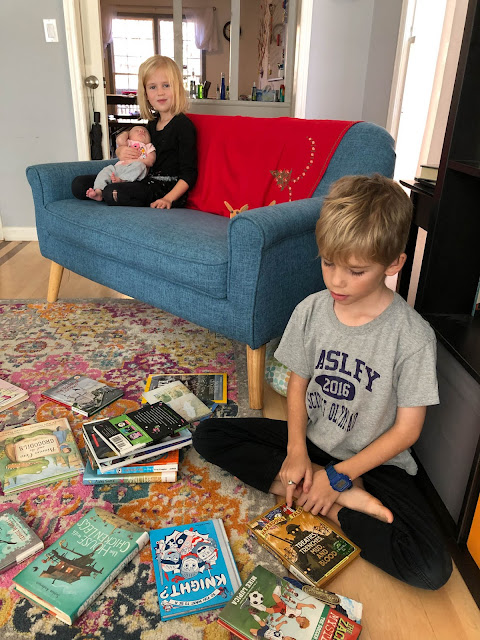 And here are those two picking library books: 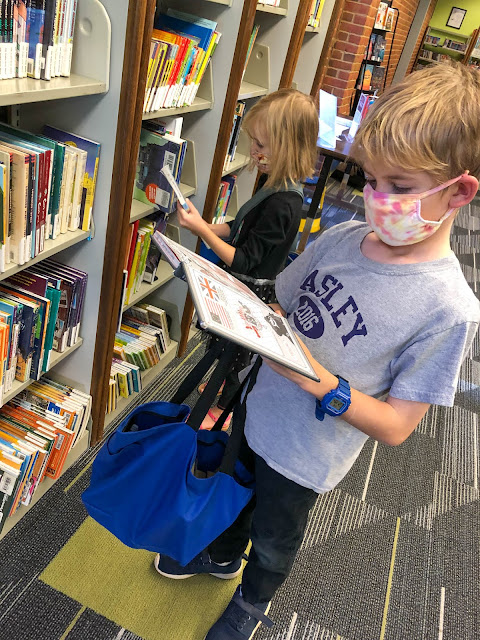 And here they are asking if they can "just finish the page I'm on" while I'm begging them to checkout so we can leave (Miriam spent her time wandering around the teen section picking out her own books): 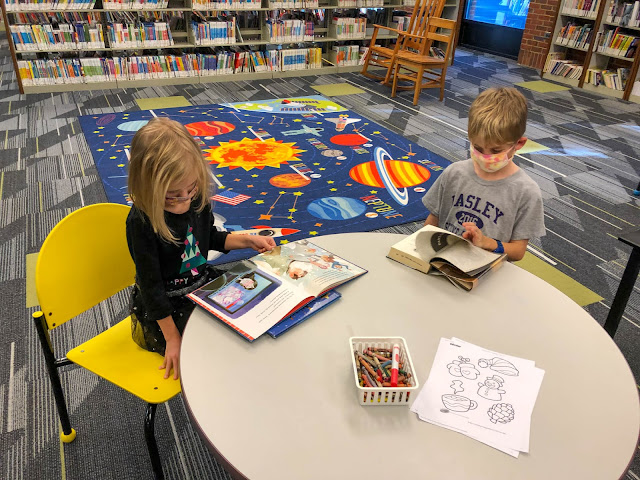 When I finally managed to drag these kids out of the library (we really can't stay all day, guys—we left the babies in the car with Rachel, remember?!) we headed to the park and let everybody out of the van.

Phoebe got to experience grass for the first time: 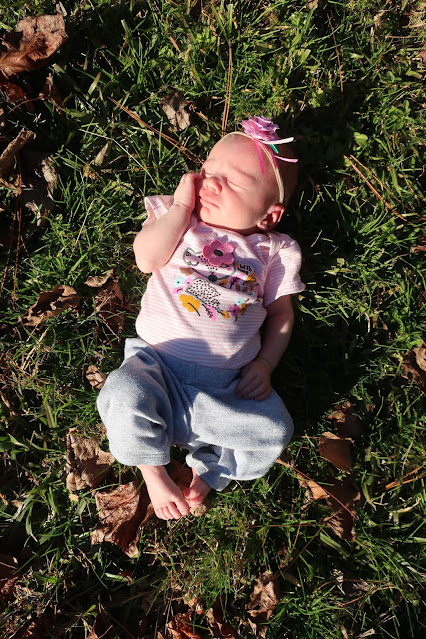 The kids humoured me by posing for photos that it was much too bright to pose for (they're cute anyway): 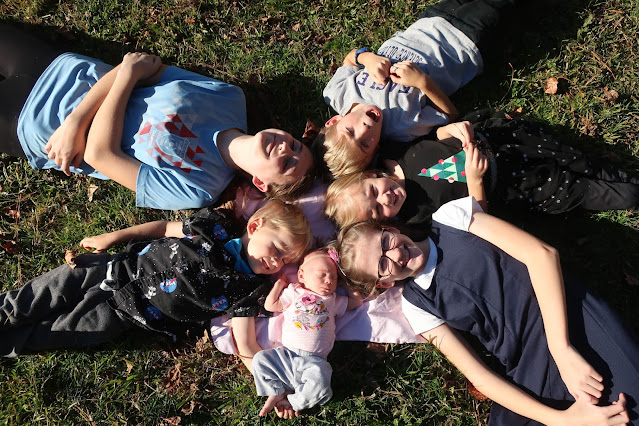 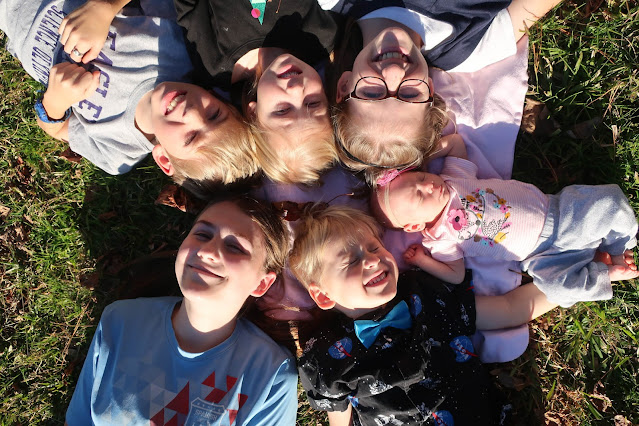 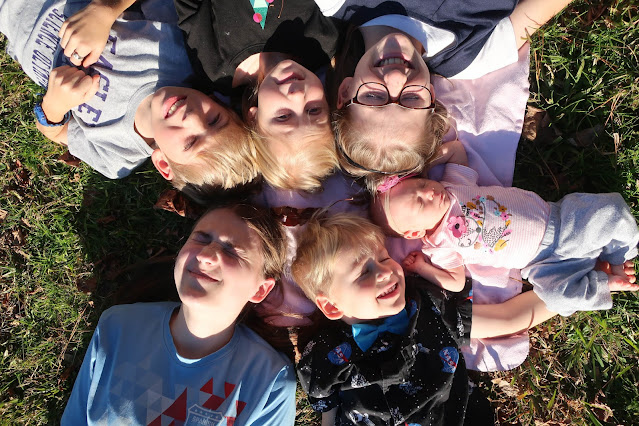 We thought Alexander's outfit was hilarious because he was business on the top, loungewear on the bottom—a perfect pandemic outfit (all ready for a Zoom meeting)! 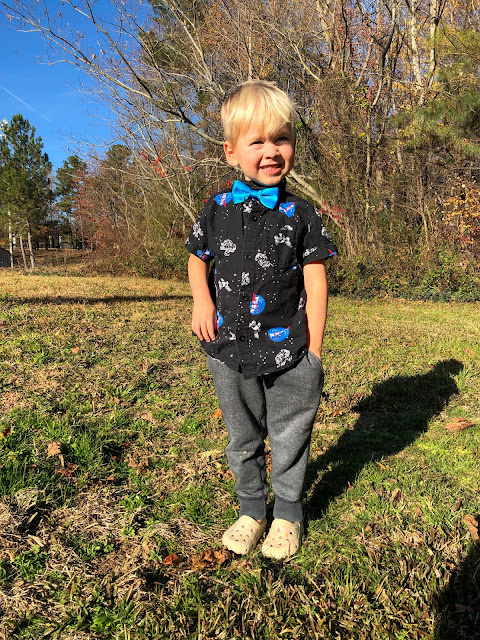 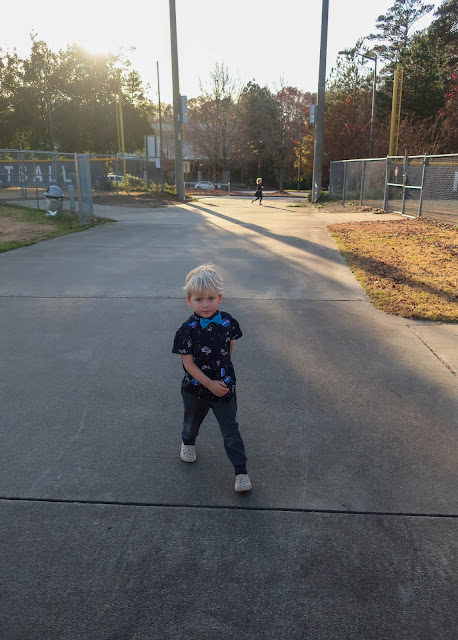 We were really only at the park for a "quick" walk because Miriam had a concert at a (somewhat deserted—because this is 2021) mall that she had to get to, but the kids did manage to play a game of tag while I took a break to feed Phoebe. These little pictures I snagged of Rachel tripping... 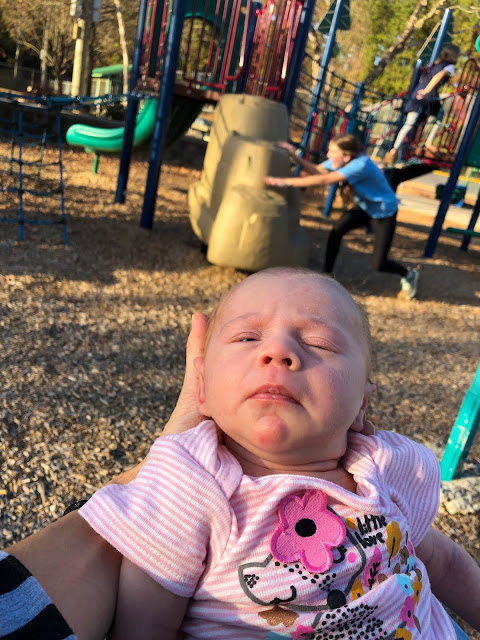 ...and then recovering from her trip... 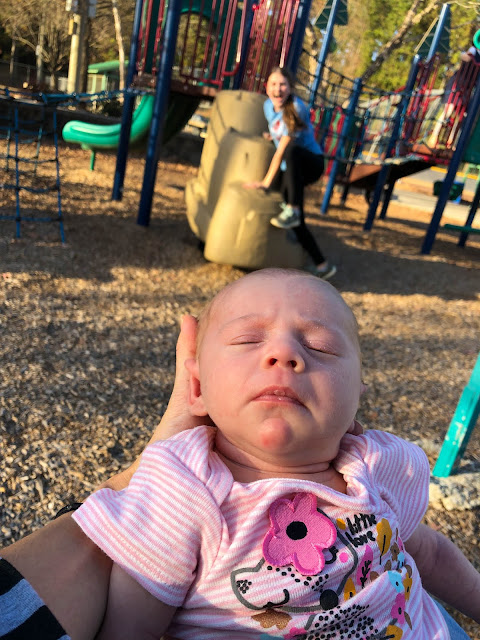 ...were somewhat hilarious.
I could hardly believe how warm it was on Friday, though it's much cooler now. We had some storm systems come through on Monday, so we dropped from the 70s to the 50s (and we're feeling it; I made Zoë and Benjamin play outside today and they came in to tell me all about how cold they were...ha!). But Friday was balmy. 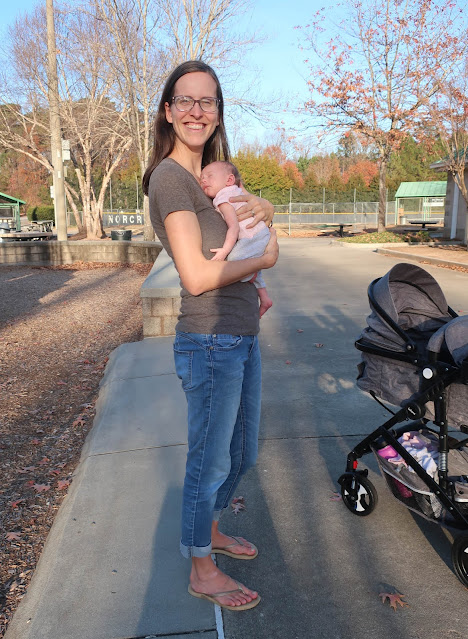 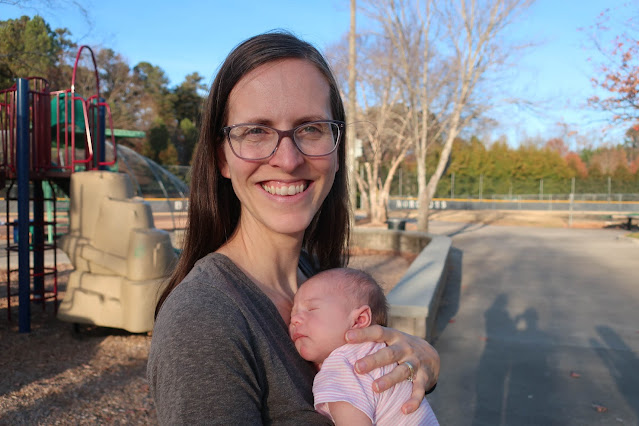 It was nice to get out of the house for something other than a doctor visit...though I had another doctor visit today. I don't remember ever having a post-partum check-up quite this early before, but here we are...coming up on four weeks and I've already been cleared for going back to normal.

Never mind the fact that I pushed a human out of my body a mere 26 days ago.

Never mind the 2.5 weeks of the most intense afterpains I've ever experienced. There were times I thought for sure I had appendicitis. I'm glad they're over...but for real...they were bad. Like, this is coming to you from a lady who birthed a human—without medication—26 days ago, so you can trust me when I say the pain was intense.

Never mind the fact that I'll likely still be dealing with lochia for a few more weeks.

Several times over the last month (when I've had quite a lot to do, in all honesty), I've lamented to Andrew (always around lunchtime) that "it's noon and all I've done is feed this baby!"

"This is why maternity leave is a thing," he'd remind me.

Not that I didn't get to rest after the baby was born, because I did! I had plenty of helpers at home and neighbours and ward members brought meals by. But, oh, I had a lot to do, and, boy, do I wish I could have slept more.

I guess right now it's my own fault for insisting we get some more school work done. My original plan was simply to take off time from the baby's birth until after Christmas...but when you show up three weeks early that makes for a long winter break!!

Anyway, I'm just happy that finals are over and my life can slow down a bit so I can snuggle and enjoy my sweet baby instead of passing her off to someone else so I can "work on this project."

Okay, also, I'll just say here that I took Rachel and Phoebe with me to the doctor's office today because I can never be sure how long these appointments will take and I didn't know if Phoebe would need to eat. I left the girls in the van (because it's a pandemic and no one other than the patient is allowed in the doctor's office right now; not even for ultrasounds). Rachel just read a book and Phoebe just (surprisingly) sucked on her pacifier (though she did need to nurse before we drove home).

But while Rachel was waiting for me she noticed that there was an absurd number of pregnant ladies walking past our car. She saw pregnant lady after pregnant lady walk by and was so puzzled by this until she remembered what kind of doctor's office we were parked in front of—the OB/GYN!

Sitting in the car with her baby sister was her favourite part of her day, for the record. It was quiet and no one interrupted her reading (she finished her book).

Benjamin, Zoë, and Alexander have been a little bit intense this week...so I don't wonder that Rachel would pick this moment of solitude as her favourite part of the day. I'm sure those three are just suffering some growing pains (having added a new sister to the mix, and coming off of the high from Grandpa's visit), but we'll settle into a new normal soon, I'm sure!

And that's nearly the end of my ramblings...

First I want to say that I don't even know how I got through all my final projects. The group project was a pain because group projects often are, but I was also glad for another pair of eyes to go over my writing because...my brain is completely fried.

I'm back to asking my baby if she needs a "dumb change," which is what I get when I merge the phrase "bum change" with the phrase "diaper change." But I've caught myself doing that with other babies.

New to me was asking Rachel to hand me a "birth clop."

"Yes," I said pointing one out to her. "There's one right there!"

So guess what we call burp cloths now.

Speaking of those, I need to get a few more because although Phoebe doesn't seem incredibly spitty (compared to my incredibly spitty babies) we have been running out of birth clops every couple of days. It's truly amazing how much laundry such a tiny human can generate!

And now my ramblings are finished. I don't even remember what the point of this post even was. But tomorrow is Thursday, which means Friday Free Day is right around the corner.

Speaking of that, Alexander asked if today was a Friday Free Day (it's not). When I told him it wasn't he said, "But you have a meeting this morning?"

And he said, "Then that's like Friday Free Day because no one will make us do any work!"

(That's what I've been dealing with from all three of those kids—Alexander, Zoë, and Benjamin—if I'm not there to tell them to do something...they just won't...which is exhausting).