For FHE, Andrew's family invited us to go miniature golfing with them. We had just been talking about doing that the week before, so we were eager to accept the invitation. It was a good day to go mini-golfing since they were doing an Operation Smile drive which meant that we got food (we hadn't eaten dinner, really)...it also meant that the price was a lot higher and we had to pay in cash. Andrew happened to have enough cash in his wallet, so we paid, which was okay because his parents paid us back (which in Andrew's mind is like free money). 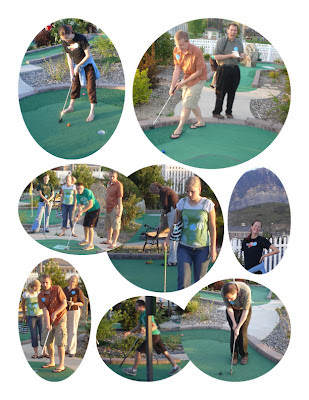 It was a really fun evening. I have no skill when it comes to miniature golfing, really...and I don't think I will ever try for real turf. I did get a hole in one, although I ended up getting last place over all. Andrew didn't get a hole in one, but he ended up getting second place overall. I guess I really need to hone in on my mini-golfing skills.

Jacob offered me some advice, but I had to pass it up. His technique is a little too...spicy...for my taste.

We had to divide up into two teams because we had too many people to all play one round. Our team went first: me and the boys. We were a little bit slow and always had the girl's team licking our heels. I suppose you could say it was because we had an extra person on our team. If you want to know what I truthfully think, it's because we had me and Jacob on our team. If Jacob and I were to have been on our own team, we would have been mini-golfing all night. Let's just say we got quite a few courtesy scores...and still lost.

I was very, very good at almost getting the ball in a lot of the time, but I missed the hole the majority of the time. Perhaps I should have paid more attention during trigonometry.

Perhaps if I had played better, Jacob wouldn't have kept giving me his perspicacious recommendations:

Karen came in first place (of course), Andrew was second, Reid third, Sarah fourth, Jacob fifth, Emily sixth, and we all know where I come in here. We all ended up happy though, even those of us who came sulking and spent the majority of our time on our cell phone (I won't name any names...but she might be featured in only 1 picture, just a hint). It's amazing what a little sunshine, fresh air, and a golf club can do to change your mood!
Posted by Nancy at 8:53 PM