Today I was thinking about a song by the BeeGees: Lonely Days.

And that is pretty much the whole song. Seriously...except instead of husband it says woman.

Here is my poor husband at work in the InfoCommons in the HBLL. While it is true that he has been trying to work more in order for us to save up for the upcoming baby, at times I think he adds a few too many shifts. He's just too nice. 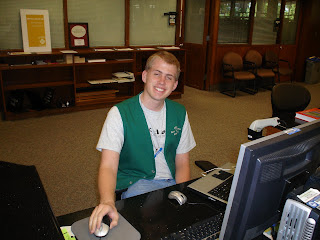 This week alone, for example, he worked 45 hours, including working until midnight on Wednesday, Thursday, and Friday...and then all day Saturday. He's also working all day Monday, so there goes our long weekend. In order to compensate for the many shifts he's picked up, we spent yesterday morning together (at IKEA) and he doesn't have to work next Saturday...so that will be nice.

We also went shopping last night at midnight because we weren't sure we would have time to today since we still haven't gone to the temple yet this month! And we still have another million things that we need to do today.

I don't really mind him working...it's just that sometimes things get rather lonely. I was really excited that my mom phoned yesterday to invite me to hang out with her last night. I'm not sure that I could have handled another night being alone until midnight. Talk about solitary confinement.

It's really not that bad. It's just been pretty crazy at his job recently. There are quite a few sick people this week, one kid is stranded in Texas (I'm not sure what the story is there), and a few others just decided to take off for the long weekend. Basically, we were the only ones silly enough to stick around, so...we are just going to work like beavers (I'll be working today and Monday as well).

At times this causes him to have identity crises. See, GenRef wears a green vest, Computer Proctors wear the blue vest, and the Multimediea Lab Assistants wear the maroon vests. Often Andrew's shift will work something like this: 2 hours in the Multimedia lab, 2 hours at the Information Desk, 2 hours at the Computer Support desk...but he doesn't have any breaks in between so he forgets where he's supposed to be working when and which vest he should have on.

Andrew wearing all three vests at once. He's so cool! 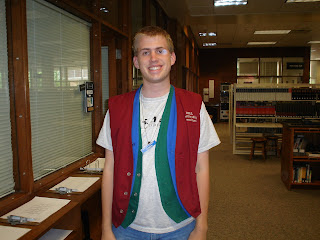 One day, he was in the blue vest (that means he was playing the role of a Computer Proctor). He was sitting at his desk wondering where the GenRef person was when another blue vest dude showed up.

"What are you doing here?" he asked Andrew, who had been working at that shift for the past 20 minutes (the other guy was 20 minutes late), "I'm working here today."

"That's really weird because I'm on the schedule to work today."

"Well, that's really weird because I'm on the schedule to work today."

That went on for a while until Andrew said, "Well, if you're working here, who's working GenRef...?"

It was Andrew. He was supposed to be in a green vest at the green vest spot, not at the blue vest spot in a blue vest. He was kind of embarrassed, but really, who can blame him for getting confused since he works all three positions virtually everyday.

Did I mention that Andrew is also taking classes so that he can graduate on time? This term he's taking Geology (with Patrick) and Advanced Writing. Next term he'll be taking a religion class, American Heritage, and bowling, in addition to working and being a first-time dad. But I'm sure he'll do a great job and come out on top of all of his classes. He always manages to do that, even under the most extreme stress.
Posted by Nancy at 2:13 AM