In December, Jacob and Sarah had a multi-school concert that they wanted us to attend. This would have been alright, but if we're going to pay $10 to see them dance, we would rather watch them dance over and over again, rather than only once or twice. We told them that we wouldn't attend the multi-school concert, but would attend the Winter Showcase, in which only their team danced.

Jacob was a little put-out that we wouldn't buy tickets from him. Understandable since they have to sell a certain number to keep their grade up. He insisted that there was not a Winter Showcase and that it was the multi-school concert or nothing.

We opted for nothing anyway, saving our $10 for the Spring Concert, which we were certain still existed.

We found out ex post facto that there was indeed a Winter Showcase. We missed it. Neither Jacob, nor Sarah told us about it. We were majorly bummed out.

But here we are 5 months later, and, true to our word, we bought tickets to attend the Spring Concert.

Jacob was in half the dances. He wrote a list of them for Grandma Pat, so we all knew exactly what dances he was in. Sarah was a little bit more of a surprise...but she was in a lot of dances, too. Jacob and Sarah even danced with each other in a few of the dances. How cute!

We took our new camera so we could see how it functioned in a real-life situation. The verdict: absolutely terrible. Don't worry. We already sent Fuji a "nastygram" and if they don't do anything to make us happier with their product, we are certainly planning on returning our camera to Amazon. 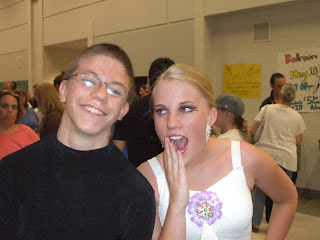 Zoom in on that picture if you dare. It's grainy and gross...and a whole lot worse quality than our other camera. I am certainly not impressed. In short, none of the pictures we took are even worth posting on this blog, since the one that we took in good lighting, close up, without our subjects moving turned out this awful... I will leave it to your imagination to see how horrible the pictures are when our subjects were far removed, in a dark room, while twirling around.

At least the videos worked out well.

Here is their opening number. I thought it was cool because they are dancing to live music! The jazz band pitched in and learned a song just for the dance team.

Jacob is usually somewhere on the left hand side of the screen. I totally missed Sarah's part--but that's because it took me so long to recognize her. All those girls look alike with their hair pulled back.

Oh, we found out that the baby really likes swing music. And all music, for that matter. She would bounce around while the kids were dancing and stop in between numbers. During one song in particular she was just going to town: Go, Johnny, Go! At first I thought she had the hiccups, but really they were too strong and kick-like to be hiccups. Plus, they matched the drum beat. Whenever the drums stopped, so did her bouncing. And then the song ended and she settled back down, waiting for the next song. It was pretty funny. Andrew didn't believe me until I made him feel my tummy...and then it was fairly obvious that she was enjoying herself.

This is a waltz that Sarah did to "our song.". Really, we don't have a song so this is our song by default. During our honeymoon we heard this song over and over and over again. It was playing on the plane when we boarded, and played multiple times through various flights. It would play randomly on the radio (and we were in Italy, so that was kind of odd), and when we were at Ellen's house, we watched Elf after coming home from Verona soaking wet and freezing cold. And this song is on that movie. So, we have a lot of fond memories revolving around this song. We played with the zoom function on our camera and it seems to work well--with videos.

They also did a Ukrainian dance. They started this a year or two after Andrew and I gained alumni status (that's a graceful way of saying we're old now). It looks like a lot of fun, and also a lot of work. Both Jacob and Sarah are in this...good luck spotting them!

This last video is of Jacob's "masquerade" number. We had a little trouble finding him at first because they are all wearing masks, but when they are dancing in three lines, we're pretty sure that Jacob is the second one in the middle line. We zoomed up on that person and followed them around stage, so if that wasn't Jacob we're going to feel rather silly.