So, here we are, eight months down and two to go. That means that I'm in my 32nd week. That means that we have 2 months left until our due date. But if you're still in the 9-month gestation club, I'm really only 7 months, I guess. I don't know. It's all so confusing. Any way you look at it though, this baby is just around the corner and I am continually morphing to accommodate for her growth.

First I was just a pot-bellied pig.

Alas, I have added another animal trait: a waddle. So now I am a pot-bellied penguin.

"What's a pot-bellied penguin?" you might ask. It's pretty much my favorite animal, bred for its skills and magic!
May 22 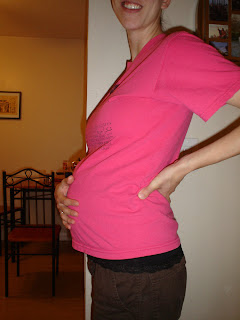 That's right. My hips have begun to soften up and separate a bit in preparation for the big day, resulting in a bit of a waddle and a shocked husband.

The other day, Andrew came to me from behind and put his hands around my "waist." He slid them down to my hips and said, "Whoa! I think your hips are getting bigger!"

Apparently it's a pretty marked difference to him. Considering I had a pretty good "twenties" frame before (you know, no figure at all--no hips, no butt, nothing), I suppose I could consider it a blessing that I now have hips (I'm sure I will consider it a blessing that they've loosened up when I'm in labor). However, the waddle kind of puts a damper on the whole situation.

Us being super lame-o 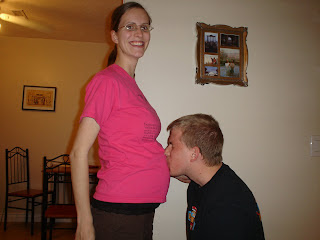