It's the eve of All Hallow's Eve and we thought it would be a pretty boring evening, considering, you know, that they don't celebrate Halloween in Egypt. There'd be no anticipation. No pranksters deciding to trick-or-treat a day early. And, certainly, no wild dance parties at the nursery school on our street.

Oh, wait. There is a wild dance party at the nursery school on our street.

There are cars lined up from here to there, and people milling about everywhere. Most people are trying to get past the bouncers standing at the gates of the Irish Nursery. Slowly, people are being let in, but there are still a ton of people milling around on the street. There are policemen directing traffic--it's that bad. Usually you only see policemen directing traffic at traffic circles, so this must be something really special to have them on our street.

I sent Andrew out to borrow a muffin tin from Lora. Partly because I needed another muffin tin and partly because he just wanted to go out and see what was happening. He said it was pretty crazy. 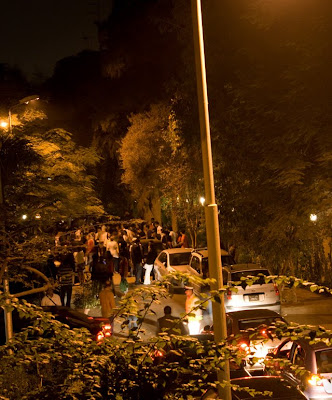 We took this picture from our balcony
All the invitees seem to be Egyptian, but a lot of them are speaking English and they're all dressed up as Halloweeners. Most of the girls are dressed up looking like American strippers, so that's kind of interesting...

Of course, they aren't playing any slow songs, because we really couldn't have hormone-crazed teens actually dancing with each other. So instead they are playing these completely undancable heavy drum songs. Very modern. Very annoying. I can hardly think anymore. They've been going since like 7 o'clock this evening and it's already 11. I wonder at how Rachel managed to fall asleep so nicely.

Maybe we need to switch out Popcorn Popping for Crazy Pop Drum Music and she'll go to sleep nicely every night.

The concept I struggle with the most, you know, besides seeing girls who I'm sure are Muslim walking around in less than what I wear as under garments, is that the party is at the Irish Nursery.

I will never see this school in the same light ever again. What kind of preschool lends itself out as a club? Really? A preschool?
Posted by Nancy at 4:27 PM