Dinner last night was absolutely fabulous. Andrew's been all into superfruits recently, which I think is kind of funny because he's always accusing me of being the health nut. Mostly we've just been eating a lot of pomegranates. I think he keeps telling me about all their merits so that I will want to buy more. He doesn't really have to do much to convince me because I like them, too, but I think it's funny that he keeps researching them.

They are so cheap here and so big and juicy! Last time we went fruit shopping we got three humongo pomegranates and a big mango, in addition to some normal stuff that we actually know how to use.

Mangoes aren't my favorite fruit in the world. I've never really known how to use them or cut them up or anything. I grew up in Canada and we just don't get a lot of mangoes up there. But once there was a huge sale on mangoes and my mom bought a whole box. They sat in our kitchen for a while until they started getting a little overripe. We had no idea what to do with them so we made mango pie.

This was before the days of rampant internet use and we had no idea what we were doing so we just cut one open to see what it was like. After sampling a little bit, my mom decided it was probably just like pumpkin...or sweet potatoe...or something, so we modified a pumpkin pie recipe and, presto! The rest is history.* We never bought mangoes again.**

Clearly I had to agree, so I went to the computer and searched for mango and pomegranate salad. After clicking around for a few minutes I found a really great (and simple) recipe. It called for green onions, which I didn't have, so I used a bit of a purple onion that we had. I think green onion would have made the salad prettier, but the purple onion did the trick taste-wise. I also left out the other spices because I didn't have them.

The recipe I found was so simple, in fact, that I feel no guilt in saying that I basically thought up the salad by myself. I just needed to find this recipe to remind myself that, much to Andrew's dismay, onion goes wonderfully well in so many fruit salads. 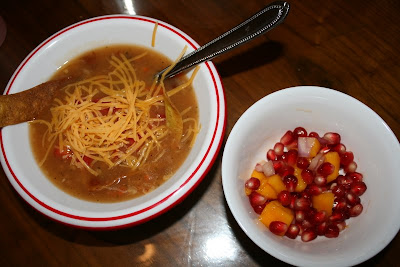 I just diced up the mango, which is really kind of tricky (curse that huge seed-thing!); separated out all the little pomegranate seeds, which is also rather difficult (curse those gross filmy white pa!); chopped up like not even a quarter of an onion, also difficult (curse those super-potent Egyptian onions); and squeezed out the juice of one lemon (that was the easiest part). Then I tossed it and put in the fridge to sit while Andrew and I made taco soup (out of an instant soup mix that Karen brought for us, so that was very easy as well).

Dinner was so good and really hit the spot on a chilly (20°C+ is chilly here) fall day like yesterday. I was so sad when dinner was over. It was all I could do to keep myself from staring forlornly into the empty salad bowl wondering why it had to be empty so soon while at the same time wondering how we'd managed to eat a whole pomegranate and mango and still have room for soup.

I might just be heading to the fruit stand tomorrow.

*From what I remember, the mango pie was actually pretty good. The pulp turned out to be a little stringy, almost squashlike, and really resembled pumpkin in both color and flavor. At least, I thought so. I still do. I don't really care for straight pumpkin, either, so maybe that's why I don't like plain mangoes.

**I actually don't recall whether or not we ever bought mangoes again. We may have, but certainly not by the boxful.
Posted by Nancy at 4:24 PM