It seems like the semester should almost be over but Andrew's department barely had their opening social so maybe it's less over than I think it is. We had an all-expense trip to Al-Azhar park, minus the 1 pound metro ride to the downtown campus so that we could catch our bus.

It was nice to not have to worry about the details of getting around town or about getting ripped off.

When we got to the park there was a talent show of sorts going on. A live band was playing traditional drumming music when we arrived and we got to watch some Whirling Dervishes for a while. 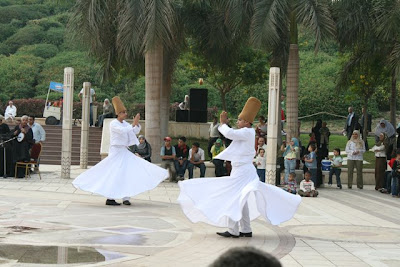 I will never understand how they spin around for so long. I know they're supposedly in some trance-induced state of bliss and learning but I can't see how they don't get dizzy. These guys must have been spinning for at least an hour.

When we, ourselves, were getting dizzy from watching the Dervishes, we headed down to the lake with the rest of Andrew's classmates so that we could watch the sunset. There's a stream thing that runs down the middle of the sidewalk for some reason...it's kind of cool in a very impractical way...and every now and then there will be a fountain or a pool. Andrew was being goofy and straddling it while we were walking. Rachel thought it was pretty funny. 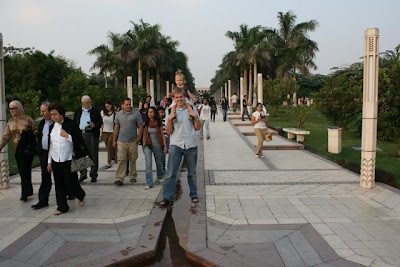 We found a nice grassy area and we all sat down to get to know each other. Many of us took off our shoes and enjoyed the grass barefoot. Rachel, of course, was swarmed by Egyptians wanting to take her picture, hold her, kiss her, play with her, and feed her. She was very gracious about it all and only kicked one man. 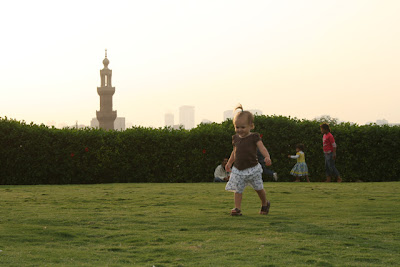 Rachel coming back after visiting with some children
There was this one guy who had an uber swanky camera and he took so many pictures of Rachel and me. He showed them to us and they were just amazing. So Andrew gave him our email address and we're just crossing our fingers that he remembers to send us the pictures.

Rachel made really good friends with a girl named Hogar. At first she was pretty shy of her, but Hogar was persistent and Rachel eventually let Hogar carry her all around without me being right there. I had fun chatting with Hogar, too. She only spoke Arabic and I was able to answer most of her questions. My answers weren't very deep answers, but at least I understood what was going on! She was very patient with me when I didn't understand and would just shake her head and 'tsk' at me and then repeat herself. 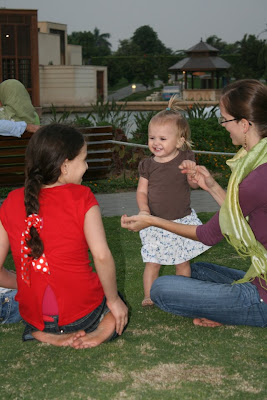 She ran back to us frequently. Just to check up on us. When she was sure we were alright she'd go off looking for Hogar again. 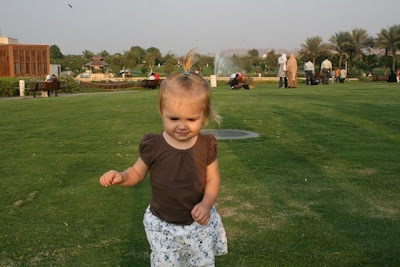 The sunset was beautiful and we had a lot of fun playing together in the grass. Grass is such a luxury here! 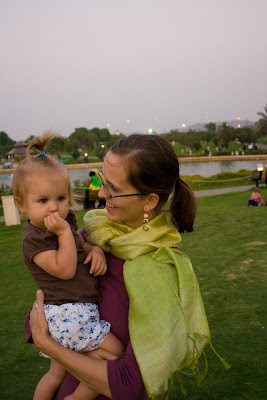 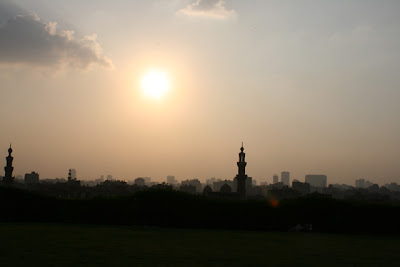 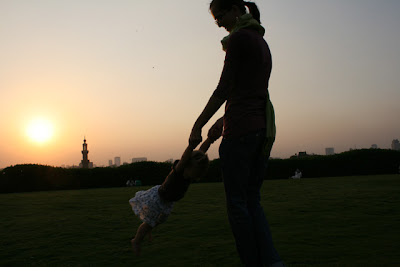 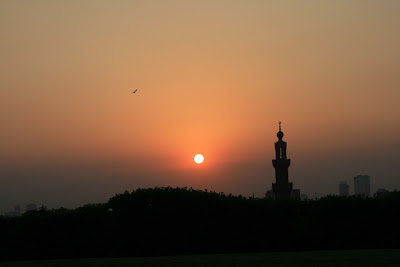 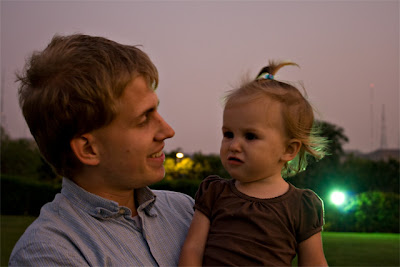 When the sun had gone down and we were all getting a little chilly we left the park and headed down to Khan al-Khalili to get some fateer (Egyptian pancakes). We've never been to Khan al-Khalili after dark so it was interesting to see how different it was. The shops were all lit up--the gold and silver shops looked particularly impressive--and there were fewer shoppers out so the streets were empty enough for kids to play soccer. Quite the contrast what we've seen before.

The pancakes were good, although all our orders got a little mixed up. I suppose dumping 20 people on a little street restaurant was shocking for our servers. They didn't seem prepared to wait our tables even though our tables had been booked in advance.

We got a ride home with Dr. Kholoussy in her private car. She lives just one street down from us and we thought this would be a great arrangement. But we ended up squishing two other girls in the backseat with us and then the driver got lost and it took us over an hour to get home. It was quite a miserable ride, but nice of Dr. Kholoussy to take us!
Posted by Nancy at 2:59 PM