Dahshur: Inside the Pyramids

This morning we headed out to Dahshur to see some pyramids. We hired Emad to take us there in his taxi—he’s probably the nicest taxi driver I’ve met so far. He called Rachel “The Little Princess” and was overall a very nice man. He asked if we wanted to go to Saqqara before heading to Dahshur, but we decided to just hit one attraction for the day. We have to do bite-sized “Rachel Trips” because she won’t go potty on a regular potty or on the ground so we have to plan the trips short enough for her to be able to “hold it.”

He took us on a big highway—four lanes in each directions—and we were really speeding along. And then I heard a high-pitched wailing. It didn’t take me long to see where it was coming from. There was a group of people huddled around a body bag. I can only assume that the woman huddled over it was the one wailing. She was making the sounds my heart would be making if I was in her position. I had to look away.

Andrew assured him that I didn’t look. But I did look, and it was horrible.

Death isn’t really something that people like to “talk” about here. It’s kind of a taboo. I suppose it’s one of those “evil eye” things. You avoid talking about it to avoid the evil eye. In this case, Emad was hoping that I wasn’t looking so that I could avoid the evil eye.

Pedestrians actually run across the highway here. I’m not very good at Frogger, so I don’t think that I will be attempting it anytime soon and really, I don’t recommend that anyone else try it, either.

Just one more thing that makes me not want to leave my house ever again.

Dahshur was neat, though. It’s the ancient city of Memphis and there used to be 11 pyramids there, but only 3 are still standing. It’s located in the village Dahshur, which is right next to Memphis. Both of these villages seem to make most of their money by farming dates…or corn. There were date palms everywhere and cornstalks galore.

And then suddenly the lush, green landscape disappeared into dust and sand. We’d reached the pyramids.

We first visited the Red Pyramid. You can actually go down inside this pyramid at no extra charge, unlike the Great Pyramids, so we, of course, had to go. Emad offered to babysit Rachel for us—he watched Finn once while Patrick and Melissa went inside…and he does seem pretty trustworthy—but Rachel wouldn’t have anything to do with him. She’s a little pickier about babysitters now than she was when she was just a few months old.

So instead I strapped her in the front carrier and away we went. I was already tired when we reached the top of the stairs leading to the entrance—carrying around that extra 20+ pounds really wears me out—and then we had to go down the 141 “steps” of the tunnel to get inside. The tunnel isn’t big enough to stand up in and it was steep and dark.

When we started going down Rachel freaked out. She grabbed my face with her hands and said, “Momma!?” as if to ask, “Why, why, WHY?” 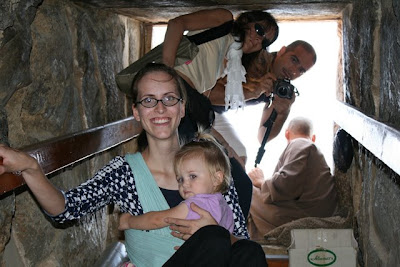 Rachel and me in the tunnel
That was her mantra the whole way down. “Mama, mama, mama, MAMA!”

I have to say, I agree with her. The descent was grueling.

I was bent over almost to 90 degrees, holding Rachel with one hand (so that she wouldn’t fall out of her carrier) and the railing with the other (so that I wouldn’t fall down the ramp). The air was dank and rancid, smelling strongly of ammonia. Except for the occasional light bulb, it was dark in the tunnel. The floor was smooth and slippery and I had to slide my foot down until it caught on the next slat before I could continue going down, for fear that I would tumble head over heels.

The tunnel was more like a ladder than anything. It was so steep and so long. I couldn’t see the bottom from the top. I had to keep asking Andrew if we were there yet because Rachel’s face was in mine the whole way down.

Finally we made it and Rachel was able to relax a little. We explored the little area we were permitted to. It was neat to be inside, but nothing to write home about. Just kidding. Apparently it was worth writing home about…because I just did. Obviously everything cool had been removed and is probably sitting, uncatalogued, in the Egyptian Museum somewhere, but it was neat to be inside, anyway. 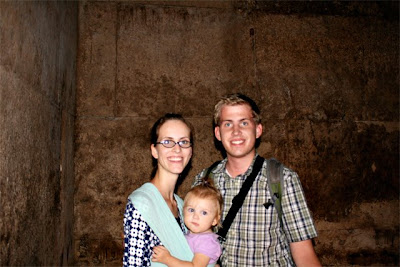 Inside the Red Pyramid
You would think that, being buried under the oldest pyramid in the world, we’d be relatively cool. On the contrary, however, the heat was stifling. But we persevered and looked in both the rooms we were allowed in, climbing yet more stairs to get to the upper room. 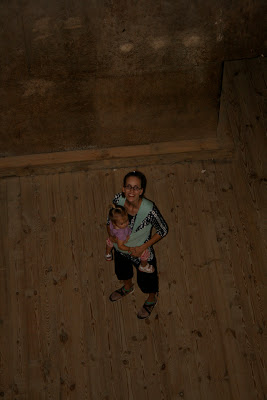 Us in the bottom chamber
My legs still hadn’t recovered from climbing down the tunnel when it was time to begin the climb back out. I was alright for the first several steps, but then my legs were really giving out. I started using my arms to haul Rachel and I up out of the pyramid. 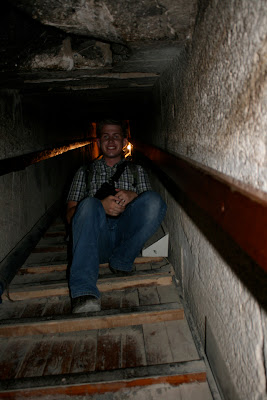 Andrew in the tunnel
She did alright until we hit the dark part again. Then she started wailing.

There was a group of Italian tourists and they passed the word up that we had a “bimba” with us and everyone moved over to let us pass them. I’m not sure why they bothered to tell everyone that we had a baby since they could probably hear for themselves that she was having a hard time. Emad told us that he could hear her screaming while he was sitting in his cab. She screamed loud and long until we reached fresh air at which time I was pounced on by several well-meaning nonne (Italian grandmothers).

All three of us were dripping in sweat and thought the wind felt marvelously refreshing.

Alas, Rachel was not permitted to enjoy the cool air for long. A particularly kind nonna came up and yanked the panel of Rachel’s carrier up so that it covered her neck and began to explain to us, in rapid-fire Italian, that we’d be the death of our daughter. Never mind the fact that the panel she chose to pull up around Rachel’s neck was the panel that had been supporting all of Rachel’s weight and that, surely, was going to be the death of me!

She didn’t seem to notice that he spoke a jumbled mix of Arabic and Italian to her (he said, “because” in Arabic and “hit of air” in Italian—Italians believe that you can catch your death by a cold blast of air on your neck). She just continued to speak Italian. No one seemed to notice that we were speaking Italian, actually, which we thought was kind of odd because we obviously weren’t Italian and since Italian is only spoken in Italy people usually wonder why anyone speaks it outside of Italy. Perhaps that was a compliment.

At any rate it meant that we got some family pictures taken by friendly Italians, completely baksheesh free. I just had to make sure to keep Rachel’s neck covered so that the nonne would stop accusing me of risking Rachel’s life…because, you know, climbing up a steep pyramid with my baby isn’t risking her life but exposing her to a cool summer’s breeze is. 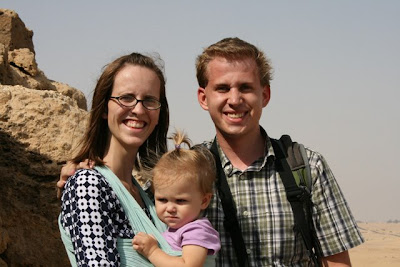 On top of the Red Pyramid 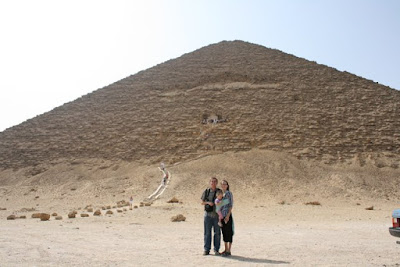 At the base of the Red Pyramid
After our picture was taken we had to brave the stairs down from the pyramid. My knees suddenly turned to jell-o and kept buckling underneath me with every step I took. I had to hang onto the railing for dear life. I was all too happy when we got to the bottom, drove to the Bent Pyramid of Snefru and I was able to put Rachel down to travel under her own power. 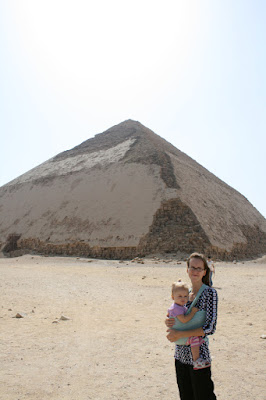 Rachel and I at the Bent Pyramid
She was pretty happy about it, too… 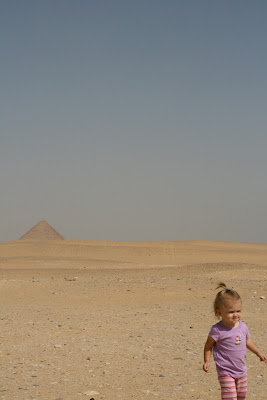 Playing in the shadows of the pyramids 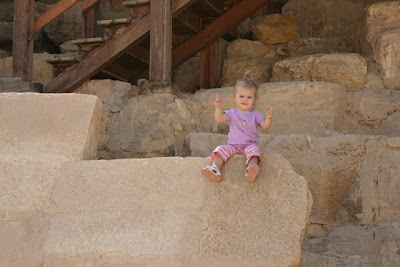 Sitting on the Bent Pyramid 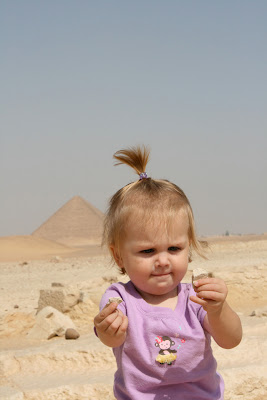 Are there rocks ahead?
…Until the guards started heckling her. If there is anything in this world she doesn’t like, it’s hats. And big animals that make ugly noises. And strangers.

All of a sudden Rachel found herself confronted with all three: a strange guard wearing a hat riding on a camel. 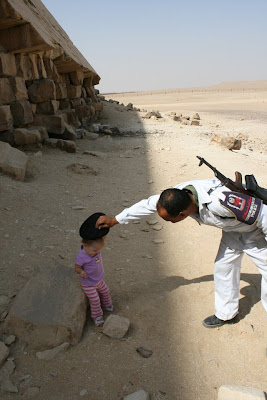 Rachel's run-in with the guard
He parked the camel (I guess that’s what you do with camels…I don’t really know), dismounted, took his hat off and put it on Rachel’s head. I think she was more terrified at this moment than she was in the tunnel at the Red Pyramid. And then he tried to get her to meet his camel. She was less than thrilled and didn’t want anything to do with the camel until it grumbled its ugly sound. Then she growled at it and it grumble-growled back and she thought it was pretty cool.

She spent the rest of the afternoon craning her neck around while growling. 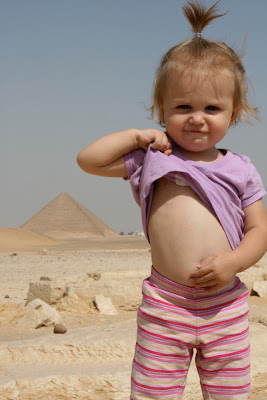 Pyramid, schmyramid...Look at my belly button!
We had a pretty good time at the Bent Pyramid, even though our legs were giving out on us. It’s a very interesting pyramid, the oldest “true” pyramid. It’s bent because they started making it at too steep of an angle and couldn’t support the weight, so mid-build decided to go with less of an incline. Interesting. 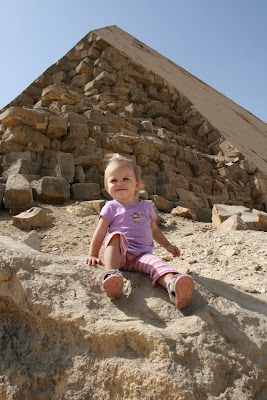 Rachel and the Bent Pyramid
It was fun to get to see the Bent Pyramid so close. Until recently it was part of the military compound and tourists were allowed to see it only from a distance. Now you can go up to it, climb on it a little, and walk around it, but the inside is still off limits. Our taxi driver hadn’t even been to it before. He was snapping more pictures than we were. 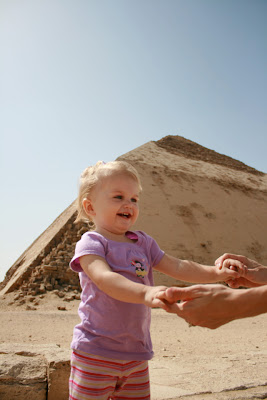 Jumping in front of the Bent Pyramid
Soon, though, it was time to go home. I was kind of dreading the ride home, remembering what I saw on the way out to the pyramids…but the ride home was blessedly uneventful.