We were on our way to the pool at Maadi House yesterday when Rachel was suddenly sidetracked by a field full of Halloween decorations. She just had to go check them out. 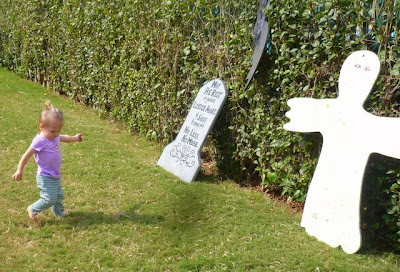 When she got to the bushes, though, and looked through them and saw the pool, she remembered that I had said we were going to go swimming and got all excited about that, again.

When we walked through the gate to the pool, Rachel ran right to the edge of a deck and almost started climbing into the shallow end with her clothes on. I was successful in convincing her that we she first don our bathing suits but still had to drag her past the pool and into the locker room.

I had her in her swimsuit and was halfway into mine when she couldn't wait any longer. She crawled out from under the changing stall door and ran away. Luckily the locker room door only has a two or three inch gap under it. She had her hands under the door and was trying to find a way to squish her head under, too, when I found her.

I opened the door and she was out like a rocket. I thought for sure she was going to fall into the pool, but she stopped right at the edge and leaned over to splash a bit.

I dragged her around to the shallow end and she walked down some of the stairs all by herself. She was such a brave girl the whole time we were swimming. She even let me swim around, with her just sitting piggyback, for a while.

It is getting colder here, though, so even though the pool was heated we didn't last very long in the water. Rachel was so cold when we got out that I even put a jacket on her. I know, I know. It's freezing out here!

And if you don't believe me here's a picture to prove it, taken in High River, AB, on or around June 14 in the late 1990s. If I could see how many candles were on the cake I'd know exactly what year for sure, but I just can't make them out. Anyway, notice all the kids in long sleeves and sweaters? And they don't even have wet hair.

Rachel did have wet hair and she was purple and goosebumpy, so I put her sweater on and let her play in the field a little more.

There was this great jack-o-lantern beanbag toss stand that Rachel had fun hiding behind and peeking out at me. 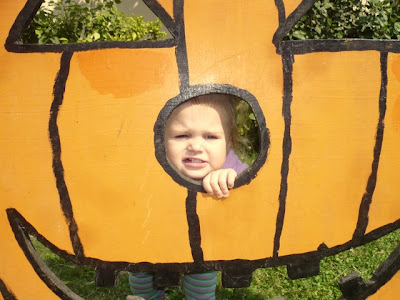 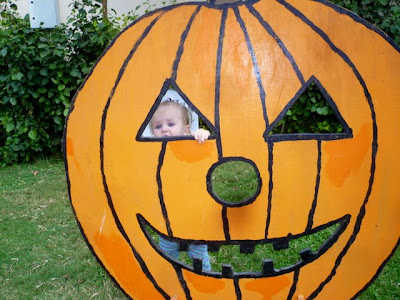 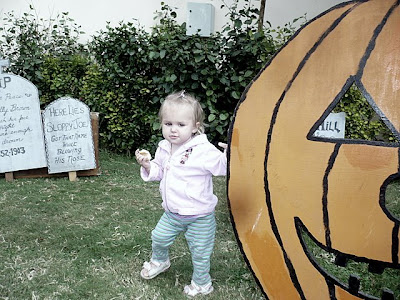 Surprise! It was me, mom! I was behind the jack-o-lantern!
Apparently the Maadi House is having a Halloween fair on Saturday. We won't be able to go, but since they had some of the decorations up already and we were there it just seemed logical to let Rachel enjoy them.
Posted by Nancy at 3:21 AM