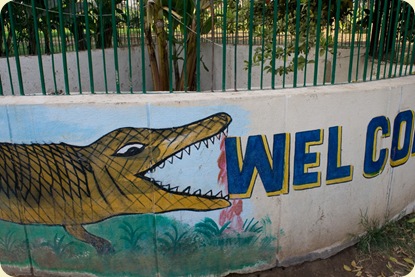 Finally, a sleep in day! The hotel breakfast closed at 10:00 AM, so everyone was up before then so that they could have breakfast. Everyone except for me and Miriam, that is.

We slept through breakfast.

Everyone came up from breakfast, lazed around, packed up their rooms for check-out and moved their things into our room (which we kept until 9:00 PM) and then got ready to go to lunch.

Miriam and I took a nap instead.

Then we watched Night at the Museum while we waited for it to be late enough to leave on our felucca ride. Can you guess what Miriam and I did?

I think our marathon napping officially marked the beginning of our colds. We both felt miserable. But I didn’t want to miss out on going to Banana Island, so I told Andrew to wake me up for that. And to sneak some food back into the hotel for me to eat. 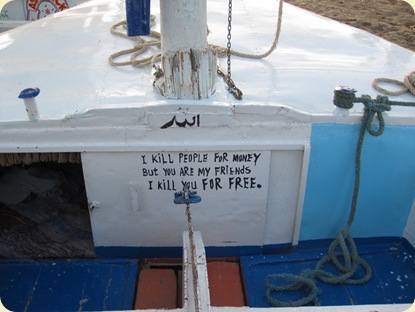 In the late afternoon we boarded our felucca, the King Stone, for our three-hour tour to Banana Island—a new agro-tourism destination in Luxor. The ride out to the island, which I suspect to actually be the other bank of the river and not an island at all, was relatively smooth, despite the windy weather. 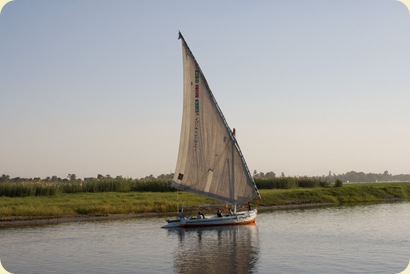 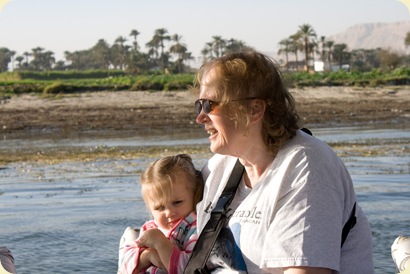 Grandpa, the teenager,* was sending email messages on his Blackberry the whole time. He had to write to all his friends to tell them that he was sailing on the Nile. 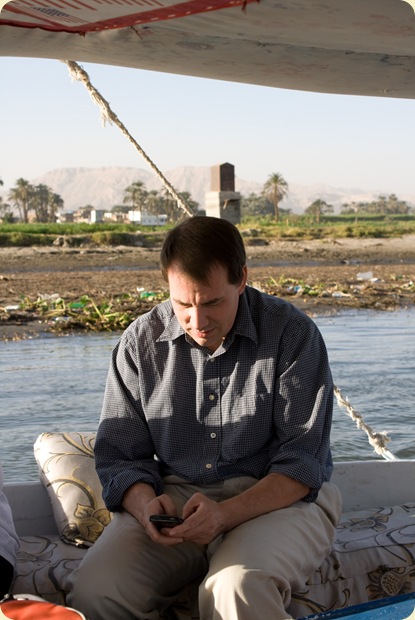 Banana Island was neat, but far too pricey. Having been so far removed from our food, it was interesting to learn about how bananas actually grow, relatively firsthand. I, for one, had never seen a banana bloom. 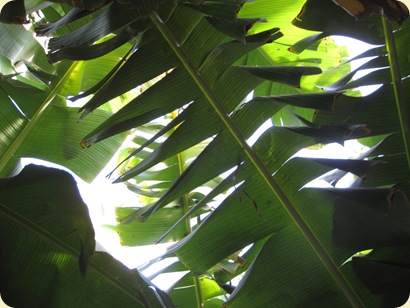 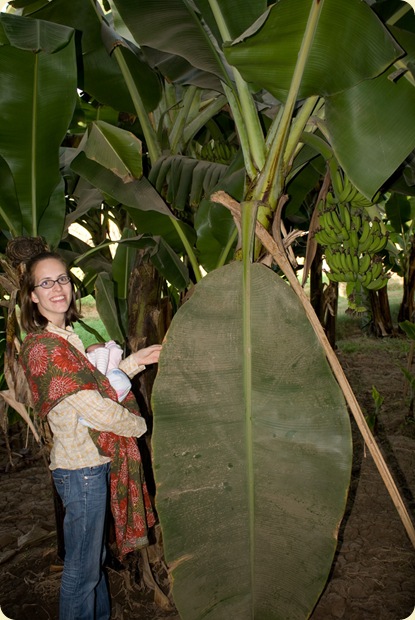 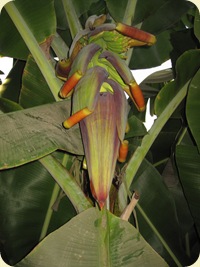 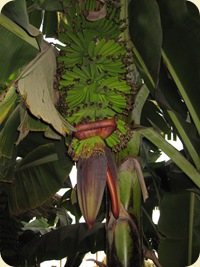 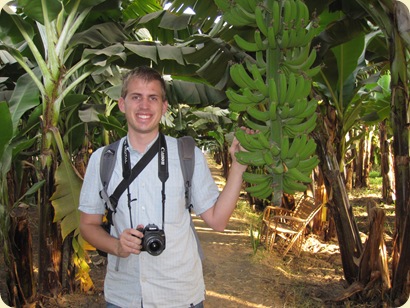 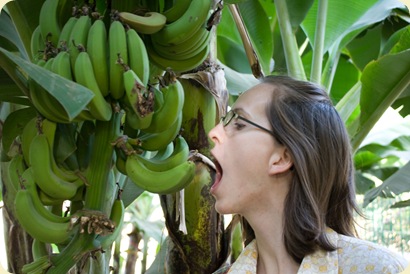 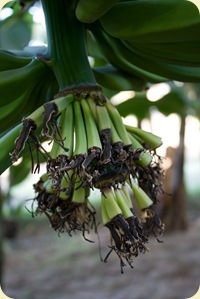 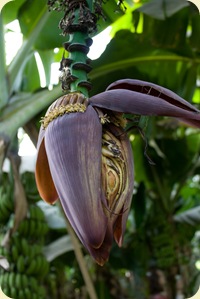 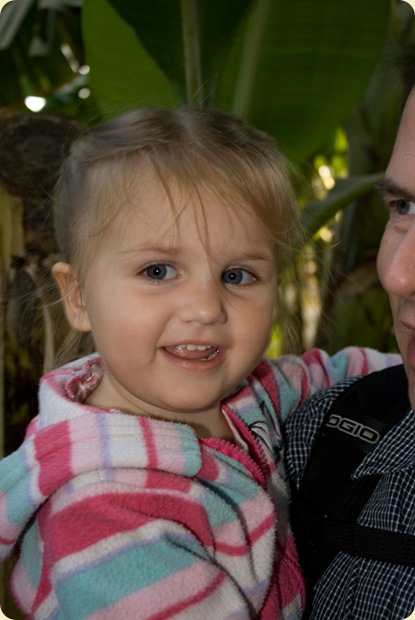 The west bank of the Nile is much more rural than the east bank—there were farm houses and fields visible from the banana grove. 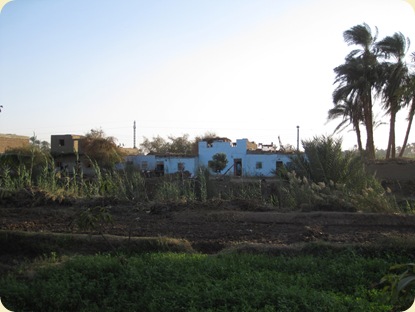 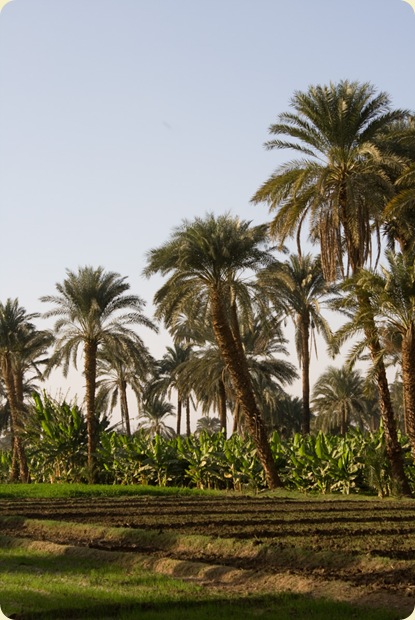 At the end of our tour we got to visit the crocodiles on the island, housed in a cage. We sang schni, schna, schnappi in honour of Schnappi. Then we ate some bananas fresh off the stem! 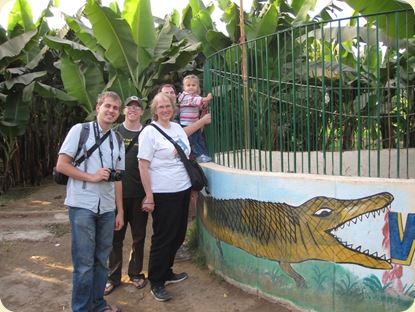 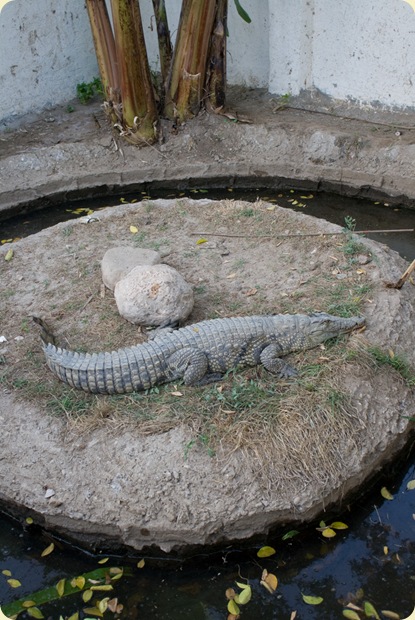 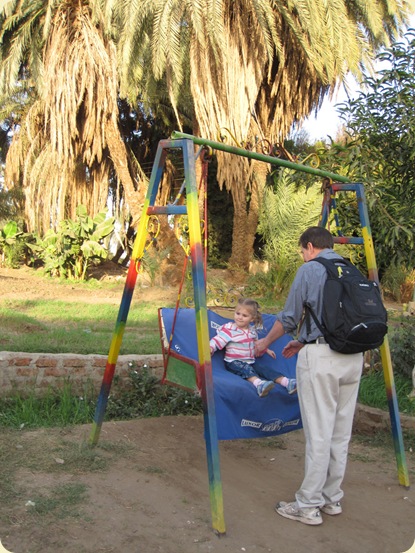 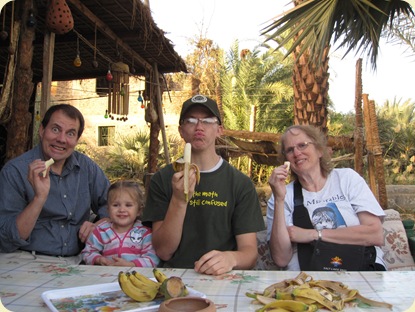 Our felucca ride back to the east bank was, hands down, the most frightening boat ride of my life. It was terribly windy and we got stuck in a bunch of reeds by an island straight off. After we got unstuck and our sail unfurled we really started clicking along. 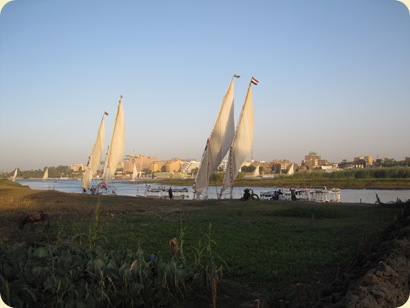 I don’t know how fast we were going, but it was fast!

Karen and I were sitting starboard to start out with, which happened to be the direction the boat was tipping. The keel didn’t seem to be doing its job of keeping the boat upright very well. Every time the wind grabbed us the boat would tip and things would fall toward our side of the boat. I thought we were going to capsize…or at least fall out of the boat.

We didn’t but we looked so scared that the boys invited us to the portside. It looked safer from where we were sitting so we took them up on their offer only to panic once again when the boat started tipping. It tipped so far that we were nearly standing up, but still sitting in our seats. Now I was sure someone was going to fall out of the boat and was very happy that I had Miriam snugly in the sling so that the other four adults could tend to keeping Rachel on board.

Eventually they took in the sails…by shimmying up the mast. Let me just say, that is not a job that I would want to have when the boat is rocking. 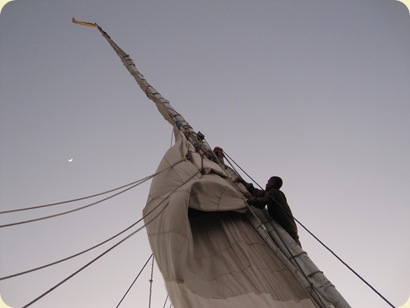 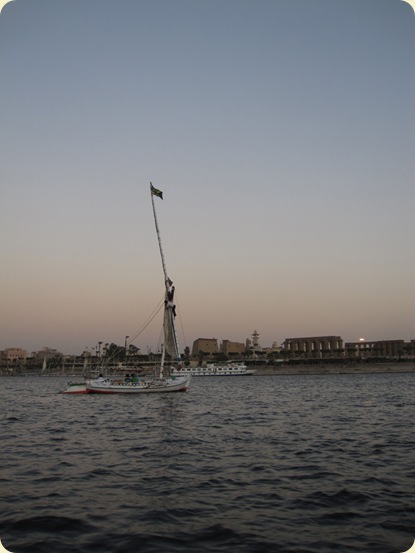 We were all very happy to be deposited on the shore safe, dry, and windblown. We headed back to the hotel to relax and get ready for our flight back to Cairo, which was delayed for more than an hour. The status of our flight was “on time” for half and hour after our scheduled departure time and then they just turned off the update screens.

No announcements were made. No explanation given.

We sat there in good faith with the rest of the passengers, hoping that we still had a midnight flight. Rachel played with a little girl from Pune, India, named Sayjel. They shared balloons and candy and had a grand ol’ time.

Finally an official-looking man walked into the terminal and started flapping his arms and ushering people to the gate yelling, “Cairo, Cairo, Cairo!”

He was grumpy and got all flustered at the gate when Andrew, handed him the tickets for me, Miriam, and himself.

Then he was upset because Karen’s ticket listed an infant, but she was holding Rachel, who had her own ticket, and I was holding Miriam, who was the infant. He got over it.

And then we almost got separated onto different buses—the doors closed right in our faces—but I said,

So the airport guy flagged down the driver before noticing that I was holding a baby.

“Your baby is not on the bus!” he said angrily.

I hopped on the bus and pointed to Rachel.

Everyone’s tempers were running a little high, but we eventually all got on the plane and back into Cairo. At 4:00 in the morning. I’m not even going to say when I got out of bed the following morning….

* When Reid and Karen were substituting the Sunbeams on Friday (the 18th), Catherine asked me who he was, since she had never seen him before.

“Who else is with them?” Jill asked.

“He looks pretty young. How old is he?” asked Catherine.

“Oh, wow!” Catherine gasped, “He is young! He must be a step-father or something…”

I burst out laughing.

Catherine hadn’t heard Jill ask about Jacob so she didn’t quite catch the shift in the conversation. It was quite comical.